The present study of screening for gestational diabetes mellitus was carried out in 500 preg-nant women attending OPD section of Gynecology Department at Pravara Institute of Medical Sciences, Loni. The high risk patients underwent glucose challenge test with 75 gm glucose, between 14-16 weeks of gestation and if negative the test was again done after 28 weeks. Out of 500 pregnant women, 117 individuals with abnormal glucose challenge test were subjected to 2 hr- 75gm oral glucose tolerance test (OGTT). Sensitivity of oral glucose tolerance test in detection of gestational diabetes in high risk group was determined. The screening of high risk group was done with the help of OGTT, which required no extra laboratory facilities, long waiting period or trained manpower. It has no side effects but guarantees good compliance of patient. OGTT hence is a reliable method to detect gestational diabetes mellitus in high risk group.

The major portion of the study population lives in rural areas with meager facilities in terms of health care deliv-ery. Poor socio-economical and educational status, dietary habits, ignorance regarding pregnancy and pregnancy related problems operate unfavourably and probably in-crease the burden of GDM. However social practices, taboos associated with pregnancy, unauthorized practitio-ners and overlook of such conditions even by specialists, due to lack of sensitivity towards importance of this situa-tion have a strong influence on the prevalence of GDM and its complications in pregnancy. So study of GDM in rural population is justified to know the real picture.

Gestational diabetes has been associated with fetal as well as neonatal morbidity and mortality. However with early diagnosis and treatment, perinatal morbidity and mortality due to this disorder can be decreased. Traditionally obste-tricians have used glucose tolerance test (GTT) for the pregnant women who manifest certain risk factors like family history of diabetes, previous birth of large babies, previous adverse obstetric outcome etc [1-4].

Since GTT is a very time consuming method, the two hour oral glucose tolerance test (OGTT) can be used as other alternative in patients with high risk factors. Hence, the present study was undertaken to find out the efficacy of OGTT in detection of gestational diabetes in high risk group.

We enrolled 500 pregnant women attending the ANC of Pravara Rural Hospital, Loni, fulfilling all the inclusion criteria. At 1st visit (before 14wks. of gestation) we evalu-ated patients for the following things. Obstetric history of all major events, relevant personal history especially die-tary habits, nutritional status etc, past history of any other major illness, history of diabetes in 1st degree relatives. General examination- measurement of height, weight and B.P., obstetric examination (Done by Obstetrician), Base-line investigations like hemoglobin, Urine routine, blood grouping and Rh typing, BSL (random), and ultrasono-graphy if necessary. Individuals were advised to attend ANC at the gestational period of 14-16 wks. and 28-32 wks. Additional visits were as per the advice of the Obste-trician for regular ANC examination and other interven-tions.

This test was performed as a routine OPD procedure. 75 gm of glucose was dissolved in 200 ml of water and the patient was asked to drink it within 5 minutes. The time was noted and the patient was asked to come back after an hour for the test. A capillary blood specimen was ob-tained and tested for blood sugar levels by glucometer. If the blood sugar levels were greater than 140mg %, the screening test was considered positive and these patients were subjected to OGTT to confirm the diagnosis of ges-tational diabetes.

Initial blood sample was taken after 10-16 hours of fast-ing and the patient was asked to drink 75gm glucose dis-solved in 200-400 ml water within 5 minutes. Blood sam-ple was taken after 2 hours. The FPG >140 mg% and /or 2hr PG > 200 mg% were considered to have gestational diabetes.

Out of 500 pregnant women who underwent OGTT, the main bulk of a study - population is formed by multipa-rous women and most of the individuals are below 25 years of age in precipitous as well as multiparous groups. 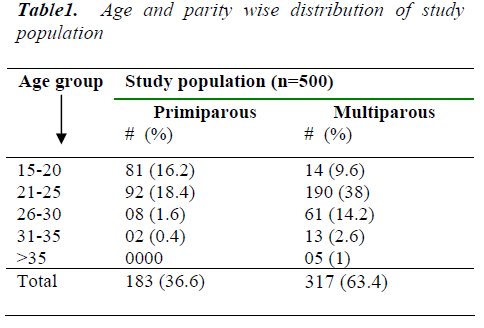 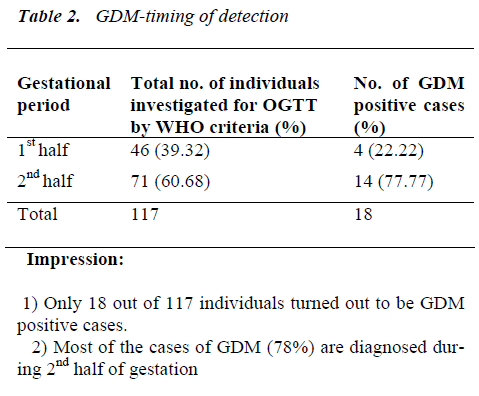 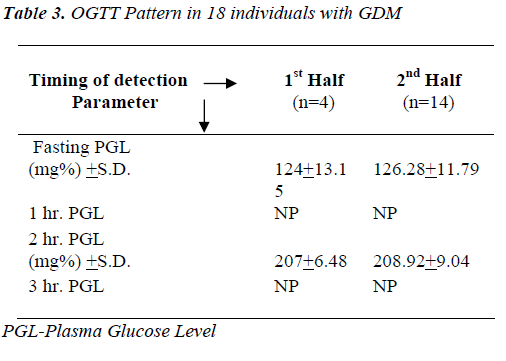 1) Mean 2 hour PGL after ingestion of 75gm glucose load was more than 200 mg% in individuals who were diagnosed to have GDM either in 1st half or 2nd half of gestation.

Table 4: OGTT Pattern in GDM and non-GDM individuals observed in 2nd half of pregnancy.

Impression: Individuals with GDM are showing elevated levels of fasting and 2 hr. plasma glucose as compared to non-GDM individuals. OGTTs’ performed only during 2nd half are compared as hormonal interference is maximum at this particular gestational period.

Out of 500 enrolled pregnant women, 452 attended the antenatal clinic during both gestational halves and re-maining 48 only during second gestational half. The main bulk of a study population was formed by multiparous women (63.4%). Most of the individuals were below 25 years of age in both primiparous and multiparous women, the youngest being 17 year old and the oldest being 37 year old. One hundred and seventeen of those five hun-dred pregnant women were subjected to 2 hr- 75 gm OGTT. Eighteen women were found to have gestational diabetes mellitus by the WHO criteria.

This estimates the prevalence of 3.6% of gestational dia-betes in this study. This is similar to the reports of Sean, Sharma et al with the incidence of 3.69% and 4% respec-tively [5,6], the incidence is higher than 1.6% of Th. Premchand Singh et al and far lower than the high figures reported by the Western Studies [7].

We consider this incidence rate lower than the average. Many factors are responsible for this low incidence rate in our study. In rural India, early marriage and consequently early conception are the known bitter facts. Advancing maternal age is a known risk factor for development of GDM. Thus decreased incidence of GDM in our study can be attributed to the fact of early marriage and concep-tion. Secondly diet with low fat (low fat intake), high physical exertion don’t allow Indian rural women to be-come obese which is the most important risk factor for GDM. Out of the 18 gestational diabetic patients, the maximum of 7 patients (39%) belonged to the age group of 26-30 years and 6 patients (33%) were between 21 to 25 years i.e. 72% of all the gestational diabetic patients were between the ages of 21 to 30 years. Coustan et al also reported a similar finding of 56% of GDM cases un-der 30 years of age [8]. Similar conclusion has been re-ported by Hughes et al with maternal age ranging from 17 years to 41 years among the positive cases, mean age be-ing 29.4 years [9]. However Green et al opined that there was an increased incidence of GDM with increasing age [10]. But Granat et al reported that only 18.7% of their patients were of older age group [11]. In our study, only one of 18 cases of GDM was 37 years old (5.5%). We observed an incidence of 3.8% GDM individuals in primi-gravida and 3.4% in multigravida. Thus we did not find any influence of parity on the incidence of GDM. Th. Premchand et al have noticed more occurrence of GDM in primigravida [7]. Serriat et al observed that 42.7% of their patients were primigravida, where as Akhtar and his colleagues found a higher incidence (59.9%) of GDM in multigravida [12,13]. However Granat et al and his col-leagues did not find any correlation between parity and alterations of carbohydrate metabolism in their study [11]. Our results are similar to Granat et al and in contrast to the other investigators. Various factors help in identifying women who are at higher risk of developing abnormal glucose tolerance during pregnancy. The most important of these being past history of diabetes in first degree rela-tives, poor obstetric performance in the past which in-cludes abortion, still birth and birth of overweight infant. In our study we observed that 9 out of 18 (50%) cases of gestational diabetes had a positive history of diabetes in first-degree relatives. Martin and Nagy also reported 54.8% and 52% cases of GDM with positive history of diabetes in first-degree relatives respectively in their se-ries [14,15]. Donald Coustan also observed a strong cor-relation between occurrence of GDM and a positive his-tory of diabetes in first-degree relatives [8]. However Campbell et al observed that only 9% of his GDM cases gave a history of diabetes in first-degree relatives [16].

Williams and his colleagues observed that only 4% of women with GDM had no known risk factors of GDM [19].

In the present study, only one individual with GDM was more than 30 years of age. However this factor is not showing statistically significant association. We have ob-served a presence of past history of any major obstetric event in 69% of gestational diabetic cases. Nagy observed that 31% of their women with GDM had poor obstetrical history in the past [20]. We also noticed a past history of abortion in 33% and still birth in 5.5% of GDM women. Drury et al noted an abnormal glucose tolerance in 18% of women with bad obstetrical history [21]. In the present study only 3 of 18 (16%) GDM cases had a presence of single risk factor while 10 patients (55%) had a presence of more than one risk factor. So with a single risk factor it is possible to anticipate only 16% of GDM cases and a combination of two or more risk factors allows the identi-fication of a maximum of 55% of all gestational diabetic cases. Similar results are previously reported by Donald Coustan [8].

However screening based on presence or absence of risk factor/s can not be advised due to a paucity of data. Therefore it is opined that OGTT should be repeated in 3rd tri-mester as it yields a large number of gestational diabetics. Due to the simplicity, acceptability, sensitivity and cost effectiveness of OGTT, it is the best method to detect gestational diabetes mellitus in high risk group.

The authors wish to thank the Principal of Rural Medical College of Pravara Institute of Medical Sciences, and Dr S.N. Jangle, Professor and Head, Department of Biochemistry, PIMS, Loni for providing support and nec-essary lab facilities.