#These authors contribute equally to this work.

Epithelial-mesenchymal transition (EMT) is a fundamental developmental program associated with the progression of various cancer types [1,2]. During cancer pathogenesis, this process leads to the loss of epithelial characters by cells, which acquire a mesenchymal phenotype. At molecular level, EMT is associated with the downregulation of epithelial markers like E-cadherin and up-regulation of mesenchymal markers like vimentin and N-cadherin [3]. Thus cells lose their defined cellcell and cell-extracellular matrix contacts which potentiates their migration and invasion [4]. Therefore, EMT may serve as a promising therapeutic target to overcome the invasion and metastasis of cancer cells.

Natural products as chemopreventive agents may serve as alternative and safe cancer treatments [5] when compared to current anti-cancer therapies, which only offer modest benefits with a wide variety of side effects [6]. Saffron (Crocus sativus, L.), a traditionally used spice and condiment has been shown to possess potential health benefits. Safranal is a characteristic constituent of saffron which exhibits various biological properties including in vitro and in vivo anticarcinogenic and antitumor activities [7,8]. Recently safranal has been shown to inhibit the proliferation and growth of prostate cancer cells by inducing apoptosis [9]. However, little is known about the action of safranal on the migration and invasion of oral squamous cell carcinoma cell cancer cells which needs to be explored. In the present study, we demonstrated that the migration and invasion of oral squamous cell carcinoma cells could be inhibited by safranal. It was observed that safranal mediates such effects by overcoming Epithelial-mesenchymal transition of oral squamous cell carcinoma cells.

MTT assay is a standard test to measure the cell viability and is based on the conversion of MTT to formazan crystals by active mitochondrial dehydrogenases. Briefly, cell suspension containing about 2 × 104 cells was seeded into each well of a 96 well plate and allowed to attach for 24 h. Safranal, prepared in DMEM was added to the wells at a concentration of (10, 20, 40, and 60, 80 and 100 μM) for 48 h. After treatment, 100 μl of MTT (Sigma Aldrich) solution was added to each well at a concentration of 0.1 mg/ml (dissolved in PBS). After 4 h of incubation at 37°C in dark, the solution was removed and 100 μl of DMSO was added to solubilize the produced formazan. Absorbance was measured at 570 nm using an automated microplate reader (Bio-Rad 550). The results were depicted as the percentages relative to the controls. The percentage proliferation inhibition rate was calculated as = (1–OD sample/OD control) × 100%.

Cells were lysed using ice cold RIPA buffer consisting of 50 mM Tris-HCl (pH 7.6), 150 mM NaCl, 1 mM EDTA, 1% NP-40, 0.5% Na-deoxycholate and supplemented with protease inhibitor cocktail (Roche). The protein concentration was determined by BCA method (Thermo pierce) and thirty micrograms was loaded on a polyacrylamide gel (10%-12%) followed by transfer to PVDF membrane. The membrane was then blocked with 5% non-fat dried milk in PBS at room temperature for 2 h, incubated with primary antibodies against E-cadherin, vimentin and GAPDH at 4°C overnight. Finally, the blots were hybridized with secondary goat anti-rabbit antibodies for 1 h at room temperature and developed using an enhanced chemiluminescence detection system (Amersham).

HSC-3 cells were platted in 24-well plates and grown to confluence. The media was then removed and a scratch was made using 100 μl pipette tip. This was followed by washing with PBS and treatment with sub-toxic concentrations of safanal for 24 h. Wounds were observed and photographed before (0 h) and after treatment (48 h) using a phase contrast microscope fitted with digital camera. Wound healing was calculated as the percentage of the initial wound until total wound closure at 48 time point. The assay was repeated three independent times.

104 HSC-3 cells in 0.5 ml of serum-free medium containing safranal at the indicated concentration were seeded in matrigel coated transwell chambers which were placed in 24 well plates containing 10% FBS-supplemented DMEM. After 48 h, unmigrated cells that remained in the upper chamber were removed by wiping the top of the insert with a cotton swab and the cells on the underside of the membrane were fixed with 100% methanol and stained with crystal voilet. The membranes were mounted on glass slides, and numbers of cells in three randomly chosen high-power fields were counted. The assay was repeated three independent times. 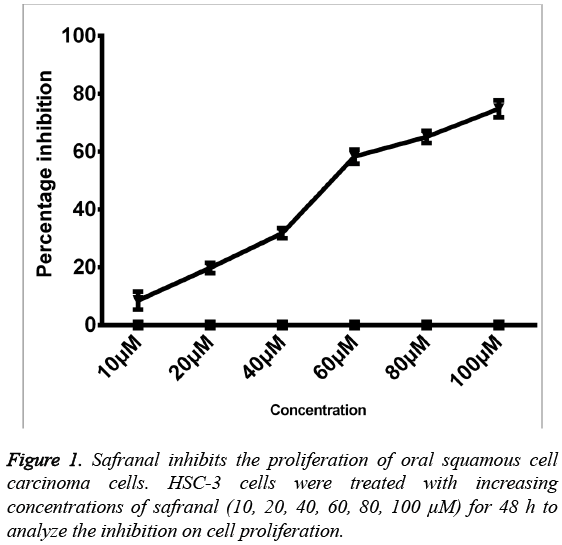 Figure 1: Safranal inhibits the proliferation of oral squamous cell carcinoma cells. HSC-3 cells were treated with increasing concentrations of safranal (10, 20, 40, 60, 80, 100 μM) for 48 h to analyze the inhibition on cell proliferation.

To determine whether safranal can inhibit human prostate cancer metastasis, we first evaluated its effect on the migration of HSC-3 cells. A wound-healing assay was performed in which HSC-3 cells were grown to confluency and a line was made by scratching the cell monolayer with a pipette tip. This was followed by the growth of cells in sub-toxic concentrations of safranal for 48 h. Results were presented as the distance covered by the cells in the wound relative to initial time point when the scratch was made and expressed as percentage wound closure. It was observed that safranal significantly overcame migratory abilities of HSC-3 cells in comparison to control, with 40 μM and 20 μM concentrations, being slightly potent than 10 μM concentration (Figure 2). Taken together, these results suggest that safranal significantly inhibited migration of HSC-3 cells which was reflected as reduced closure of the wound with safranal treatment. 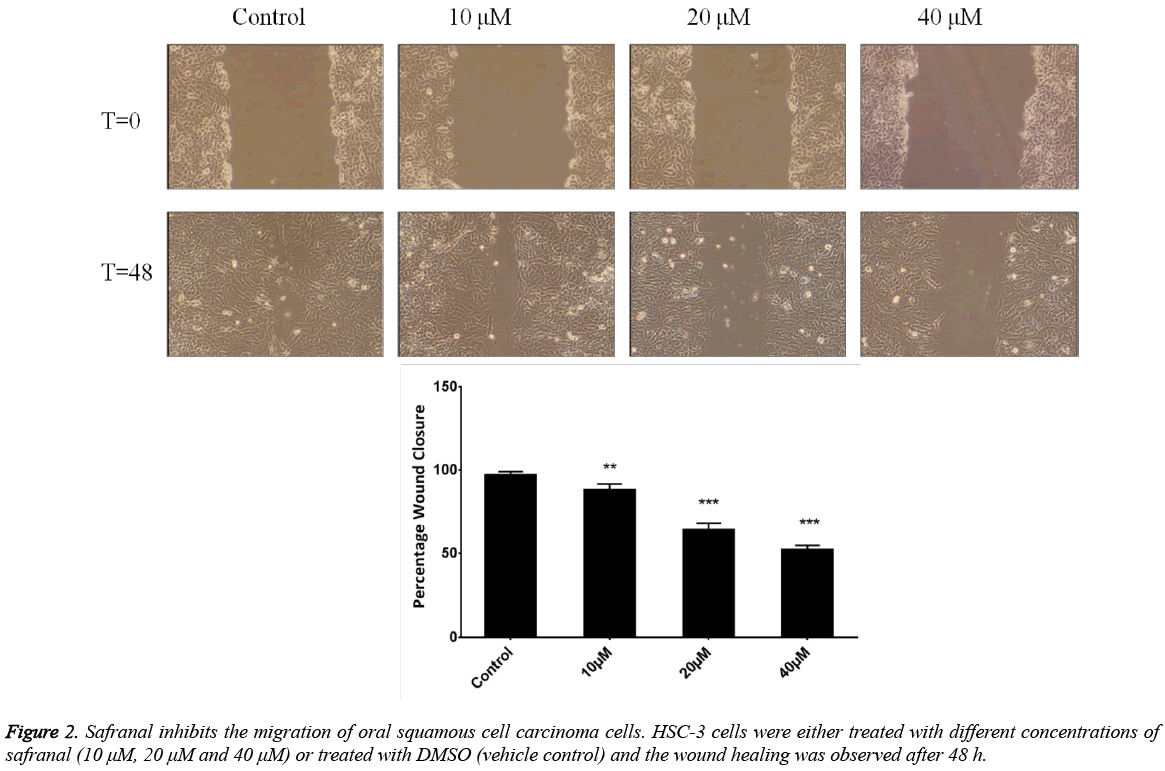 Figure 2: Safranal inhibits the migration of oral squamous cell carcinoma cells. HSC-3 cells were either treated with different concentrations of safranal (10 μM, 20 μM and 40 μM) or treated with DMSO (vehicle control) and the wound healing was observed after 48 h.

Invasiveness is the inherent capability of the tumor cells and constitutes an important process necessary for cancer metastasis. To evaluate the effect of safranal on the invasion of oral squamous cell carcinoma cells, HSC-3 cells were treated with safranal at the indicated concentration in transwell chambers coated with matrigel for 48 h. As shown in (Figure 3), it was observed that the treatment of HSC-3 cells with safranal significantly reduced their invasiveness. The effect was found to be dose dependent with 40 μM and 20 μM concentrations showing better inhibition than 10 μM concentration of safranal. 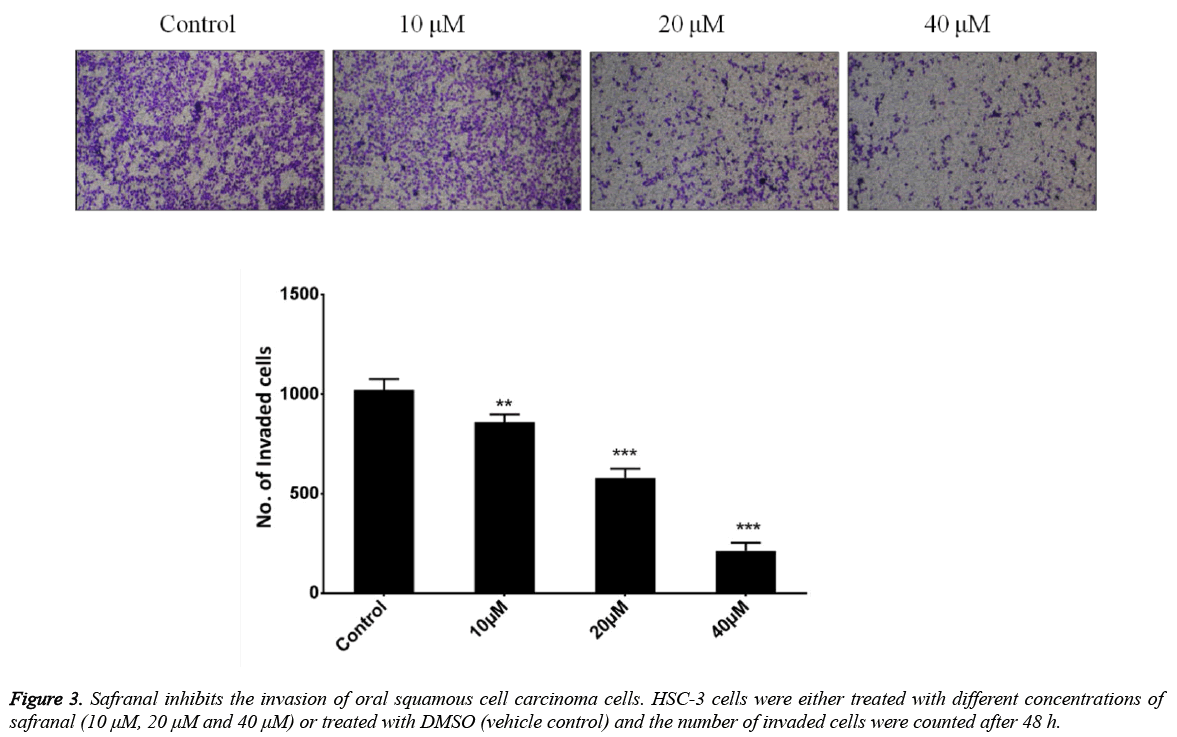 Figure 3: Safranal inhibits the invasion of oral squamous cell carcinoma cells. HSC-3 cells were either treated with different concentrations of safranal (10 μM, 20 μM and 40 μM) or treated with DMSO (vehicle control) and the number of invaded cells were counted after 48 h.

The role of safranal in regulating the migration and invasion of HSC-3 cells was further evidenced by evaluating the expression of mediators of EMT including E-cadherin, vimentin and Snail. As shown in Figure 4, treatment of HSC-3 cells with different concentrations of safranal for 48 h had a considerable effect on the expression of the EMT markers. 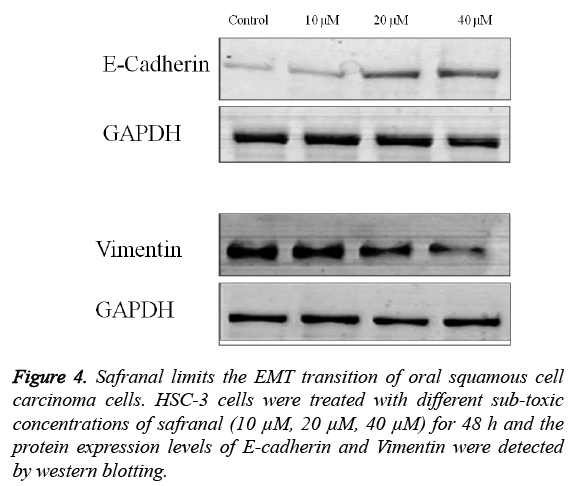 It was observed that there was an increase in the expression of E-cadherin (epithelial marker) with corresponing decrease in expression of vimentin (a mesenchymal marker). Taken together these results indicate that the safranal inhibits the metastatic potential of HSC-3 cells by overcoming their EMT.

Compounds isolated from natural sources or their ingredients constitute over 50% of the drugs reported for anticancer activity in clinical trials [10,11]. Dietary factors such as spices represent an attractive source of these agents, which have shown remarkable anti-carcinogenic properties both on tissue culture and on tumor cells in vivo [12,13]. Safranal, an active constituent of Saffron has been shown to exhibit inhibitory effects on the proliferation and growth of various cancer cells [7,8]. However studies evaluating the effect of safranal on the metastasis of cancer cells particularly oral squamous cell carcinoma have rarely been done. Therefore the present study was carried out to evaluate the potential of safranal in overcoming the migration and invasiveness of human oral squamous cell carcinoma.

In present study we observed that safranal was highly potent in inhibiting the proliferation of HSC-3 cells. This effect on the growth of cells was found to be dose dependent with IC50 value of 56.24 μM. The essence of safranal as an agent that could disrupt the metastatic process in the oral squamous cell carcinoma progression was tested by migration and invasion assays using HSC-3 cells. It was observed that safranal could efficiently overcome the migration and invasiveness of HSC-3 cells when used at sub-toxic concentrations. These data was further substantiated by evaluating the expression of EMT markers, E-cadherin and vimentin under treatment with safranal by western blotting. We found that safranal increased the expression of the epithelial marker, E-cadherin in HSC-3 cells in a dose dependent manner with corresponding decrease in the expression of a mesenchymal marker, vimentin by safranal treatment. The finding points at the role of safranal in impeding the EMT in HSC-3 cells and thus provides an evidence for the potential use of safranal against oral squamous cell carcinoma progression.