Safety and efficacy of continued Sorafenib therapy after disease progression in patients with advanced hepatocellular carcinoma: A multicenter, prospective study.

Background and objective: Sorafenib is the standard treatment for advanced hepatocellular carcinoma. However, no consensus has been reached regarding the criteria for its discontinuation. To study the optimal timing for discontinuation, we performed a prospective evaluation of the effect of continuing Sorafenib for the treatment of progressive disease (PD). Methods: Patients with advanced hepatocellular carcinoma were actively enrolled and administered Sorafenib therapy; for patients requiring further treatment for PD identified in imaging studies, Sorafenib treatment was also continued with the PD used as a new baseline. Treatment was administered until PD was reached a second time, at which point the safety and efficacy of the treatment was evaluated. Results: Thirty patients were enrolled and received Sorafenib treatment, and 20 underwent additional therapy. Of these 20 patients, all were determined to have PD based on a second imaging evaluation. During the continued treatment, no persistent, difficult-to-treat cases were attributed to adverse drug reactions. Of the patients receiving additional therapy, a stable disease (SD) evaluation was obtained in 45% of cases. The criteria for achieving SD with continuous therapy included patients with no PD at the initial treatment evaluation, and those for whom the dosage was increased during treatment. Conclusion: We performed a prospective evaluation of the safety of continuing Sorafenib therapy after PD, and we determined that Sorafenib was well tolerated; this is a treatment option that should be considered when no other second-line therapy is available.

The drug Sorafenib acts by inhibiting RAF kinase, which contributes to cancer cell growth and the vascular endothelial growth factor (VEGF) receptor, which contributes to angiogenesis in the tumor microenvironment. This drug was found to prolong survival in two large-scale, double-blind, comparative studies conducted in Europe/North America (the Sorafenib HCC Assessment Randomized Protocol [SHARP] trial) and in Asia [3,4]. Sorafenib has been accepted as a standard treatment in guidelines published both within and outside of Japan [5,6].

In the SHARP study, Sorafenib treatment continued until the occurrence of both radiologic progression, as defined using the response evaluation criteria in solid tumors (RECIST) criteria [7], and symptomatic progression, as defined by the Functional Assessment of Cancer Therapy-Hepatobiliary Symptom Index 8 questionnaire [8], or the occurrence of either unacceptable adverse events or death. Therefore, Sorafenib treatment was continued until symptomatic progression, even if the radiologic evaluation identified progressive disease (PD); these findings confirmed the survival benefit of Sorafenib and suggested that its therapeutic effect cannot be judged using simple radiological evaluation alone.

To determine the optimal discontinuation criteria for Sorafenib, we performed a prospective study at multiple institutions in which we continued the administration of Sorafenib after PD had been reached in cases where such administration was possible.

With the PD as a baseline, we continued the treatment until the next PD evaluation could be obtained, and we performed a study of the treatment efficacy and safety, the results of which are reported herein.

This prospective study was conducted at eight centers in Japan. The institutional review board or independent ethics committee at each institution approved the study protocol. The study was conducted in accordance with the principles of the Declaration of Helsinki and its amendments in line with Good Clinical Practice, and all patients provided written informed consent before participation. It was registered in the UMIN Clinical Trial Registry under the number UMIN000005818.

Patients with advanced HCC who were treated with Sorafenib between July 2011 and June 2013 were enrolled in this study. The inclusion criteria were as follows: age ≥20 years; presence of histologically confirmed or clinically diagnosed HCC (fulfilling the criteria for lesions with typical imaging); absence of any benefit from a treatment with established efficacy, such as resection and local ablation; presence of Child-Pugh A disease; an Eastern Cooperative Oncology Group performance status (ECOG-PS) of 0 or 1; lesions measurable with contrastenhanced computed tomography (CT) or contrast-enhanced magnetic resonance imaging (MRI); patients who could follow the prescribed treatment protocol; hemoglobin ≥8.5 g/dL; neutrophil count ≥1500/mm3; platelet count ≥50,000 /mm3; total bilirubin level ≤2.0 mg/dL; aspartate aminotransferase and alanine aminotransferase levels ≤5 times the upper normal limit (UNL); serum creatinine level ≤1.5 times the UNL.

Patients received Sorafenib (400 mg) twice a day, but they were allowed up to two dose reductions (from 400 mg once daily to 400 mg every 2 days) for drug-related adverse events. Of these patients, those who appeared able to tolerate an increased dosage were allowed an increased dosage up to the standard administrative dosage. Immediately after completing the informed consent and registration forms, participants were administered Sorafenib orally at a dosage of 400 mg twice daily. After Sorafenib administration and the identification of PD using imaging studies, Sorafenib administration was continued when possible; with the PD period as a baseline, the treatment was continued until the next PD. However, Sorafenib treatment was discontinued if unequivocal disease progression was documented on the basis of clinical judgment (e.g. worsening of the patient’s general condition), rapid tumor growth was observed, Sorafenib treatment could not be continued due to an adverse event, the patient withdrew consent for participation, the protocol treatment could not be initiated within 14 days after enrollment, or the investigator otherwise found discontinuation necessary. This protocol did not specify any therapeutic regimen as the optimal treatment to be provided after the discontinuation of Sorafenib treatment.

The primary end-point of the study was to assess the safety of continued Sorafenib therapy from the first episode of PD to the second episode of PD. Secondary end-points included the efficacy and safety throughout the treatment period.

Clinical and laboratory assessments were performed every two weeks. Radiological assessment using dynamic contrastenhanced CT or contrast-enhanced MRI was performed at baseline and every 6 weeks (±14 days) after Sorafenib administration until June 2014.

To achieve the primary end-point, a sample size of approximately 30-40 patients was considered sufficient. An enrolment target of 40 cases was set, as it was considered a reasonable number of patients to be enrolled during the 2-year registration period for this patient group.

Time-to-event data were estimated using Kaplan-Meier plots and the median (95% confidence interval [95% CI]). Demographic and clinical characteristics were compared using the chi-square test or Fisher’s exact test, as appropriate. The factors determined to the factors related to the efficacy in treatment 2 were analyzed using logistic regression analysis. The baseline variables were analyzed using univariate log-rank tests. All variables that had p-values less than 0.05 were included in the logistic regression analysis. A p-value of less than 0.05 was considered statistically significant. All analyses were conducted using computerassisted JMP8.0 software (SAS Institute).

The number of cases registered during the 2-year study period was 30. However, one patient refused chemotherapy. Twentynine patients received at least one dose of Sorafenib and were included in the safety analysis (Figure 1). The protocol treatment was discontinued owing to adverse events in 4 patients prior to the radiological PD assessment at the first evaluation; therefore, the first episode of PD could be evaluated in 25 patients. After the first episode of PD, 5 patients were withdrawn from the treatment protocol because of deterioration in performance status (PS) (n=2), adverse events (liver dysfunction and lung infection) (n=2), or patient refusal (n=1); therefore, 20 patients continued Sorafenib treatment beyond the first episode of PD. All patients who continued Sorafenib administration achieved a second PD evaluation. 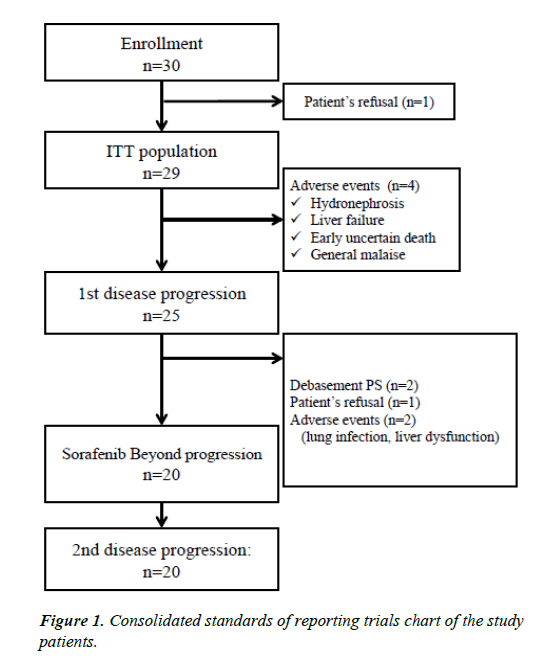 The baseline characteristics in this study are shown in Table 1. The median age of the 29 patients treated with Sorafenib was 75 years. Most of the patients were men, with vascular invasion observed in 14 cases (48%) and distant metastasis in 7 cases (24%). The Barcelona Clinic Liver Cancer (BCLC) stage was C in 19 cases (65%). In 23 cases (79%), previous treatment had been administered. In the cases where Sorafenib was not continued after the initial episode of PD, many had vascular invasion or did not have a previous treatment history. Nine cases (90%) advanced to BCLC C.

The criteria for drug-related, treatment-emergent adverse events were those affecting at least 10% of patients at any grade, or those affecting at least 5% of patients at grade 3 or higher. Drugrelated adverse events are shown in Table 3. With the exception of one patient who died of early uncertain causes during Treatment 1, the Treatment 1 results were not greatly different from those of previous reports [4,5,10]. During Treatment 2, virtually no adverse events of Grade 3 or higher were observed, nor were there any cases of treatment discontinuation due to adverse drug reactions.

Figure 2: (a) Time from the start of treatment to disease progression, measured using the modified Response. Evaluation criteria in solid tumors criteria. The median times to progression were 102 days (95%) confidence interval (CI), 42-138 days during treatment 1 and 77 days (95% CI, 40-107 days) during treatment 2. (b) Kaplan-Meier estimate of overall survival from the start of treatment to the data cutoff date of June 1, 2014. The median overall survival was 367 days (95% CI, 190-518 days).

This study is the first to actively evaluate the safety and efficacy of continuing Sorafenib treatment after an imaging evaluation using mRECIST evaluation. Using the mRECIST criteria after PD, the Sorafenib treatment was continued with PD as a baseline; until the next PD evaluation, there were no cases of treatment discontinuation due to adverse drug reactions. This result suggests the tolerability of the continued administration of Sorafenib until the second PD evaluation based on the mRECIST criteria, and it offers useful information for studying the discontinuation or continued use of Sorafenib.

It appears that the continued administration of Sorafenib after PD is acceptable when there is no other second line available. In a previous retrospective study, RECIST criteria were used to study patients with PD divided into groups that did or did not continue treatment; the results indicated that the group that continued treatment had a better prognosis [11]. Another previous study also demonstrated similar results [12]. However, neither of these reports could exclude the effects of bias; therefore, they could not verify of the safety of continuing Sorafenib administration. Our results appear to be in favor of continuing treatment administration from the viewpoint of safety.

From the results of the sub-group analysis, it appears that in cases where continuing treatment administration was problematic during the initial administration, many patients had advanced vascular invasion. Those who experienced adverse events were more likely to have elevated bilirubin levels, and the decision to continue treatment in these types of cases will require careful study.

On the other hand, factors that had a positive influence on the effects of continued treatment included not achieving PD in the initial imaging evaluations performed between 4 and 8 weeks after the start of treatment and an increase in dosage during treatment. Cases of PD during the initial treatment appear to indicate a primary lack of efficacy of Sorafenib; in such cases, little can be expected from continuing administration. While the efficacy of continued administration of Avastin for colorectal cancer has also been demonstrated in a randomized controlled trial, cases with a progression-free survival of 3 months or less were excluded from the trial; similar exclusion criteria may also apply to continued Sorafenib therapy [13].

In addition, a report of prolonged use of Sorafenib suggested that it can lead to a drop in the concentration of the drug in the blood [14], and increasing the dosage appears to be an important factor in maintaining the concentration in the blood. In cases of gastrointestinal stromal tumors, increasing the dosage of imatinib when the patients’ conditions worsen has been reported to be useful [15], but declines in the blood concentrations of imatinib have also been reported [16]. Based on these studies, it would appear that adjustment of the drug dosage is important during continued Sorafenib administration.

One limitation of this study is the small sample size; further large-scale studies to evaluate the efficacy of Sorafenib continuation beyond PD are needed. Another limitation is the single-arm test. The criteria for deciding whether or not to continue administration appears to largely depend on the attending physician’s judgment, which can impede objectivity.

In conclusion, we performed a prospective evaluation of the safety of continuing Sorafenib therapy after PD, and we determined that Sorafenib was well tolerated; this is a treatment option that should be considered when no other second-line therapy is available.