Objective: The paper is intended to analyze and evaluate the specific clinical effects of patients who suffered from invasive bone tumors at proximal tibia and received the rotating-hinge knee prosthesis replacement.

Method: 1,000 cases of patients with invasive bone tumors at proximal tibia all received the treatment of rotating-hinge knee prosthesis replacement. After the operation, the 4-year follow-up visit was conducted on these patients to understand knee joint recovery, complication incidence rate and illness recurrence rate etc. for an evaluation of the treatment effects.

Results: The average time of follow-up visit was 4.1 ± 0.5 years and 837 patients recovered well. The clinical score system of osteoclastoma showed that the average score was above 3 with the overall effective treatment rate at 83.7%. 163 patients suffered from illness recurrence with the recurrence rate at 16.3%, and 97 (9.7%) patients suffered from complications during the post-operation recovery with the average knee joint flexion at (95.5 ± 2.4)° and straightening knee joint flexion up to 180°.

Conclusion: Good treatment effects are achieved among patients who suffered from invasive bone tumors at proximal tibia and received the rotating-hinge knee prosthesis replacement, and the treatment is beneficial to the knee joint functions and normal limb movement.

Proximal tibia is the predilection site of primary malignant bone tumors. Given the greater difficulty of the reconstructive surgery after bone tumor resection as well as the relatively high incidence rate of palindromia and complication, the amputation method is generally adopted for treating patients. However, researches show that: the amputation not only severely affects daily lives of patients but also has negative effects on their mentality and emotions [3]. As the clinical medical technology improves continuously in recent years, the therapeutic principle of “lengthening patients’ survival time and improving patients’ living quality” is regarded as a priority in cancer treatment and more patients hope to keep their limbs intact in the treatment. Therefore, a lot of attempts and studies have been made clinically, showing that: it is an effective way to use the rotating-hinge knee prosthesis replacement (Figures 1 and 2) for the treatment of invasive bone tumors at proximal tibia [4]. 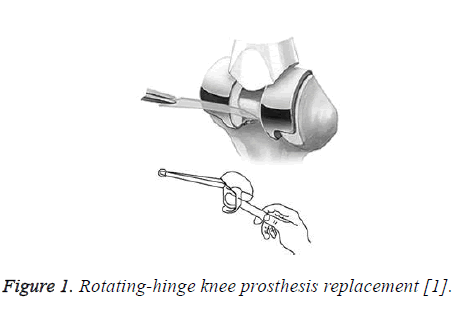 A detailed treatment and curative effect analysis was conducted among 1,000 patients who suffered from invasive bone tumors at proximal tibia and were treated with knee prosthesis replacement in the paper.

The 1,000 cases of patients, who were admitted for primary invasive bone tumors at proximal tibia from January 2005 to January 2010, were selected as research objects: 618 male patients and 382 female patients aged from 23 to 52 with the mean age at (34.5 ± 3.4). Among those patients, 711 were with osteosarcoma, 35 with chondrosarcoma, and 254 with II-III level osteoclastoma. All patients were voluntary to participate in the research and signed the informed consent form. The clinical data were complete with research value. In addition, this study has obtained the approval of Ethical Commission of our hospital.

The 711 osteosarcoma patients were first subjected to scraping check for illness diagnosis, and the second chemotherapy before the extensive tumor excision surgery. Next, the rotatinghinge knee prosthesis replacement was used to reconstruct bone defects and patellar ligament attachments, and the soft tissue defects were repaired by transferring medial heal of gastrocnemius. After that, further chemotherapy was carried out consolidate the therapeutic effect of the surgery. The remaining patients who were insensitive to chemotherapy were directly related with excision and knee prosthesis replacement after diagnosis. To guarantee a sound replacement effects, the tumor size, excision scope and the matching prosthesis of all patients were identified through x-ray plain films and MRI evaluation [5].

The median incision of knee joints was used in the surgery to realize the extensive incision or radical incision of tumor focuses. Two rounds of chemotherapy were conducted on osteosarcoma (Figure 3) before the surgery in order to make the focus margin clearer and kill micro-satellite focuses. The patellar ligament was peeled from the tubercle of tibia and stored. The prosthesis was inserted into thighbone and tibia, and then fixed by bone cement (Figure 4). The knee-stretching function was reconstructed through the suture of patellar ligament attachments and prosthesis. For patients with relatively severe soft tissue defects, the problem of prosthesis cover was solved by the medial translocation of gastrocnemius. 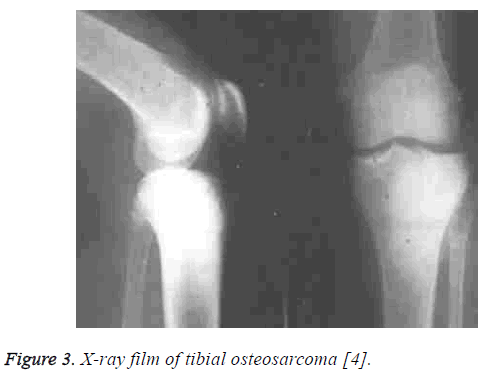 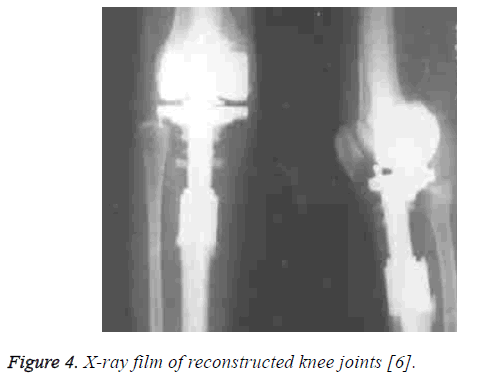 After the replacement surgery, the affected limbs should be raised and inserted with two drainage tubes for negative pressure suction for 48-72 h. The intravenous injection of broad-spectrum antibiotics was done to prevent infection in the general anesthesia induction, which can last for 5-7 days after the surgery. The patients started to accept the isometric strength training of quadriceps femoris in 48 h after the surgery, and exercise on the knee-joint functional training device three weeks later. The flexion degree gradually increased, which was controlled under 45° in the first week. In the following 1 month, the patients were guided to physiotherapy to gradually increase the flexion degree of lower limb and strengthen the muscle training of the lower limbs. Finally, these patients could walk independently without external forces in most cases with their knee joints bending for 80°-90° and straightening up to 180° [7].

The follow-up visits were done among patients through on-site visits and telephone follow-up etc. for about 4 years. The clinical score system of osteoclastoma was used to systematically evaluate the functional recovery of patients after treatment. Meanwhile, the probability of complication, the recurrence rate and the curative efficacy rate were recorded after treatment.

The paper studies the application of rotating-hinge knee prosthesis replacement in invasive bone tumor treatment at proximal tibia. Excel forms were used to record and analyze the treatment conditions of patients and relevant data with enumeration data represented in the form of (n, %) and measurement data in the form of (x̅ ± s).

The average time of follow-up visits is (4.1 ± 0.5) years. During the period of postoperative rehabilitation, there are 97 (9.7%) of patients suffered from knee joint pain, which were then gradually recovered through follow-up treatment. The 837 patients recovered well. The clinical score system of osteoclastoma shows that the average core is above 3, the mean pain core is 4.6 ± 0.3, the mean joint movement function score is 3.8 ± 0.3, the mean emotional acceptance score is 4.1 ± 0.5, the mean score of external-force help is 3.4 ± 0.4, the mean score of walking ability is 3.8 ± 0.6, and the mean gait score is 3.6 ± 0.1. The overall curative efficacy rate is 83.7%, the average flexion of knee joints at 95.5 ± 2.4° and straightening flexion is up to 180°. The remaining 163 patients suffered from illness recurrence (the recurrence rate at 16.3%).

Compared with amputation or joint fusion, the joint replacement can greatly help patients to keep their limbs and it makes patients more satisfied whether it is in limb movement functions or in appearance. With the constant improvement of medical technology, the stable motion scope of prosthetic joints gets better, thus improving the mental acceptance of patients [8]. Rotating-hinge knee prosthesis, a stable semilimitation hinge system, has the functions of axial rotation as well as horizontal flexion and extension. On the basis of flexion-extension, the additional axial rotation not only makes the joint motion stable and flexible, but also the axial rotation mechanism reduces the stress between bone and implantation materials, which greatly reduces the incidence rate of flabby fracture or fatigue fracture. The outstanding advantage of the therapeutic regimen lies in realizing the combination of dynamic and static reconstruction in tumor excision positions, which effectively increases the accuracy of reconstruction [9]. It can be seen from the research results of the group that: 1,000 cases of patients, who were treated with rotating-hinge knee prosthesis replacement, recovered well and the curative efficacy rate reached up to 83.7%. In addition, the chemotherapy is rather necessary for the treatment of osteosarcoma patients, so the patients received the adjuvant chemotherapy before and after the surgery in the research. Clinical researches show that the pre-surgery chemotherapy can induce the necrocytosis of bone tumors, shrink tumor size and make tumor borders clearer, thus improving the possibility and feasibility of limb salvage [7]. The post-surgery chemotherapy can effectively inhibit the micrometastasis of partial tumor cells. Generally, the first post-surgery chemotherapy was suggested to be done after the complete healing of wounds-usually two weeks after the surgery, and the main purpose was to reduce the influence of chemotherapeutics in the normal cell mitosis, thus shortening the healing time of surgery wounds and reducing the occurrence rate of complications including wound infection and pain etc. [10].

In conclusion, good treatment effects have been achieved when the rotating-hinge knee prosthesis replacement is used in treating invasive bone tumors at proximal tibia, so the treatment method is worth promotion.