Aim of Study: The aim of this study was to describe the endodontic treatment of a maxillary second premolar with three canals and three separate roots using CBCT as the diagnostic tool.

Case Report: Male patient was referred for endodontic treatment of tooth 25 indicated for rehabilitation. The Cone beam computed tomography (CBCT) 3D images of the tooth revealed that the maxillary second premolar presented three canals centered on three separate roots. The cleaning and shaping of the three root canals was done with mechanized Pathfile® continuous rotating and then reciprocating motion by means of the WaveOne Gold Primary® system.

Knowledge of the root anatomy and its possible anatomical variations are one of the key factors to achieving a correct cleaning and shaping of the root canal system, and thus ensuring a successful endodontic treatment [1]. The morphology of the maxillary premolars is complex and variable, with the maxillary second premolar being the one that presents the greatest complexity, since it is the only tooth that can show the eight configurations of the Vertucci classification [2]. Nevertheless, there are few studies that report on its complex anatomy. These teeth frequently present a root (94.6%) with a canal (53.7%) or a root with two canals (40%) [1]. The anatomical variation of three roots and three separate canals in a maxillary second premolar has been observed only rarely [2,3].

During endodontic procedures, the use of periapical x-rays as a complementary examination is crucial, since they help arrive at a correct diagnosis, determine the treatment plan, control the different stages, and assess the outcome [4]. Nevertheless, the information provided by a periapical x-ray is limited to a 2D image of a three-dimensional structure, and poses distortion and superposition issues of anatomical structures. These limitations can be overcome with Cone Beam Computed Tomography (CBCT), which provides a 3D image of the root canal system [4].

The aim of this study was to describe the endodontic treatment of a maxillary second premolar with three canals and three separate roots using CBCT as the diagnostic tool.

Male patient, 55 years of age, with no relevant medical history, was referred for endodontic treatment of tooth 25 indicated for rehabilitation. The patient did not relate any subjective symptoms. The clinical examination of the tooth revealed an occlusal-distal amalgam restoration and an occlusal-mesial compound resin, both in poor condition. Normal response to sensitivity and percussion tests.

The preoperative x-ray examination showed deep restorations, retracted pulp chamber, presence of three roots with their respective canals and space of the normal periodontal ligament (Figure 1A). The clinical diagnosis was normal pulp and normal apical tissues and endodontic treatment through rehabilitation. 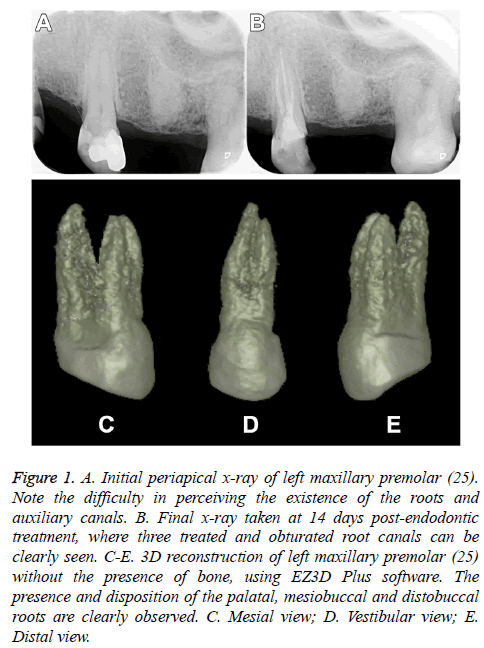 Figure 1: A. Initial periapical x-ray of left maxillary premolar (25). Note the difficulty in perceiving the existence of the roots and auxiliary canals. B. Final x-ray taken at 14 days post-endodontic treatment, where three treated and obturated root canals can be clearly seen. C-E. 3D reconstruction of left maxillary premolar (25) without the presence of bone, using EZ3D Plus software. The presence and disposition of the palatal, mesiobuccal and distobuccal roots are clearly observed. C. Mesial view; D. Vestibular view; E. Distal view.

Given the unusual morphology of the premolar, the decision was made to deepen the diagnostic analysis with a CBCT exam, which was visualized through the EZ3D Plus software. The 3D image of the tooth (Figures 1C-1E) was obtained and its morphology was assessed on the coronal, sagittal and axial planes. On the last plane, four sections were identified: chamber floor, root cervical third, root middle third and root apical third (Figure 2). The images revealed that the maxillary second premolar presented three canals centered on three separate roots: Mesiobuccal (MB), Distobuccal (DB) and Palatal (P). Routine nonsurgical endodontic treatment was planned. A conventional endodontic access was created with an Nº 2 Endo Access Bur® (Dentsply Tulsa, Tulsa, OK, USA) and an Endozeta® bur (Dentsply Tulsa, Tulsa, OK, USA). The root canals were located with an endodontic microscope (OM-100, Ecleris, USA). 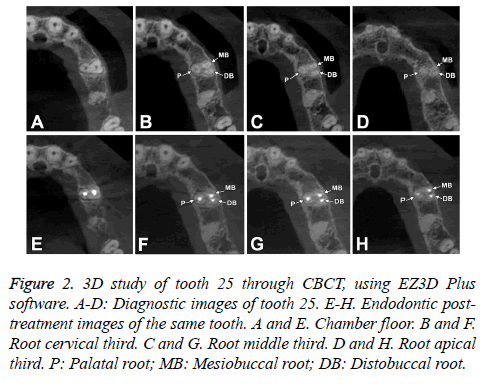 Irrigation was done with a 5% sodium hypochlorite (NaOCl) solution (Asfer Chemical Industry Ltd, Sao Caetano Industry Ltd, Sao Caetano do Sul, SP, Brazil) between each filing. For the final irrigation, an Ethylene Diamine Tetra Acetic Acid (EDTA) 17% solution was used (Prime Dental Products Pvt Ltd, Mumbai, India) as a complement to the NaOCl and both were activated with the EndoActivator® sonic frequency system (Dentsply Maillefer, Ballaigues, Switzerland). Obturation was performed by thermoplastic technique with the Elements Free® obturation unit (SybrondEndo, USA), using Wave One Gold Primary® tapered gutta percha points in the three canals and Top Seal® epoxy resin-based root canal sealer (Dentsply Maillefer, Ballaigues, Switzerland). Final x-ray (Figure 1B) and CBCT images showed that the three canals had been correctly sealed (Figure 2). The endodontic treatment was checked at 7 and 14 days, with the tooth appearing asymptomatic and with no signs on the control x-ray; therefore, the patient was referred to his dentist for subsequent rehabilitation of the tooth.

The undetected (and therefore untreated) canals when endodontic treatment is performed represent a high percentage of therapeutic failure, which is why additional roots pose a greater challenge at every operative phase, including the design of the cavity, location, cleaning and shaping of the root canal system.

The x-ray examination is essential for a correct endodontic treatment, in both the diagnosis and treatment plan or to assess the outcome; however, it frequently fails in the detection of roots and auxiliary canals because the amount of data obtained by conventional film and periapical x-rays is limited by a series of events: (i) the 3D anatomy of the zone that has been x-rayed compresses into a 2D image, (ii) superposition of structures, (iii) geometric distortion of the anatomical structures [4]. These issues can be overcome by the use of CBCT, which can produce 3D images of the individual teeth and surrounding tissues [4], allowing exploration on the sagittal and coronal planes, deprojecting the anatomical structures and providing accurate information about the number of roots and canals.

Endodontic success in teeth that present anatomical variations requires a correct diagnosis. Although it is normal to find a canal and a root in the maxillary second premolar, the clinician must pay attention to the appearance of one or two supernumerary roots. CBCT is presented as an effective diagnostic tool in such cases, as it affords a three-dimensional study of the tooth to be treated.