Objective: This study is to detect miR-16 expression in peripheral blood of patients with Coronary Heart Disease (CHD), and explore the role of miR-16 in vascular endothelial injury.

Conclusion: MiR-16 expression was up-regulated in peripheral blood of patients with CHD. MiR-16 regulated ATG14 expression in endothelial cells. Thus, miR-16 may play a role in the development of vascular endothelial injury and CHD.

Coronary Heart Disease (CHD) is a type of serious disease, which frequently occurs in cardiovascular system and is closely related to the environment, autoimmune, and genetic factors [1-3]. The pathogenic processes of CHD are very long, and the chronic vascular endothelial injury is a major cause of this disease [4,5]. It is demonstrated that endothelial cells have endocrine, paracrine and autocrine ability and can secrete biological active substances to regulate vascular function, such as nitric oxide, prostacyclin I2, thromboxane A2, which play important roles in occurrence and development of CHD [6,7]. In addition, the basic pathological change of atherosclerosis is the injury of vascular endothelial cells, which is a risk factor for CHD [8,9]. However, the exact pathogenesis mechanisms are still unclear [10].

MiRNA is a class of small non-coding RNA with 18-22 nt in length, which can inhibit protein translation through binding to 3’ UTR of target mRNA and then regulate gene expression as an important post-transcriptional regulator [11]. Bioinformatics algorithm predicts that about 1/3 genes can be regulated by miRNA [12]. It is demonstrated that miRNA expression profile changes significantly in peripheral blood in patients with cardiovascular diseases, and some of them could be used as diagnosis markers, such as miR-1, miR-135, and miR-126 [13,14]. Mature miR-16 is processed from precursor miR-16-1 and miR-16-2. MiR-16-1 is located in one fragile site on 11q24, and miR-16-2 is located in 21q211 near Let-7c [10]. MiR-16 could inhibit tumor proliferation, metastasis and promote apoptosis and its expression is down-regulated in lung cancer, liver cancer, ovarian cancer, and pancreatic cancer, etc. [15-17]. miR-16 is also related to cardiovascular diseases. For example, miR-16 inhibits angiogenesis through downregulating expressions of VEGFR2 and FGFR1 [18]. The expression change of miR-16 can induce myocardial cell hypertrophy [19]. The role and mechanism of miR-16 in CHD are not clear.

In this study, we aim to detect the expression of miR-16 in peripheral blood in patients with CHD and explore its role in vascular endothelial cells.

This study included 67 cases of CHD patients, which was consisted by 37 cases of Unstable Angina Pectoris (UAP) and 30 cases of Stable Angina Pectoris (SAP) from February 2013 to August 2014 in Department of Cardiology in Shanghai Ninth People's Hospital. Among all the patients, 31 cases were male and 36 cases were female, and the mean age was (63.2 ± 5.36) years old. For control, 30 healthy individuals (21 males and 9 females) were included from center of health examination with the mean age of (60.80 ± 4.5) years old. All the patients were diagnosed based on 2011 “ACC/AHA Unstable Angina (UA)/non-ST Segment Elevation Myocardial Infarction (NSTEMI) Guide" and standard treatment guidelines of chronic stable angina by the Chinese Medical Association. Totally 5 ml fasting blood was collected from each patient and each healthy individual within 24 h of admission. Prior written and informed consent were obtained from every patient and the study was approved by the ethics review board of Shanghai Ninth People's Hospital.

DMEM medium with 10% FBS was used to culture HUVEC cells under 37°C in 5% CO2. When cell confluence reached about 70%-90%, trypsin digestion method was used for cell passage, and the first 3-6th generation cells were used for experiments.

Total RNAs of peripheral blood and cultured HUVEC cells were extracted by Trizol (Invitrogen, California, USA) method. Then, RNA was reverse transcribed into cDNA. For the detection of miR-16b, the primers for miR-16b were 5’- AGCAGCACGTAAATATTGG-3’ and universal primer. The 20 μl reaction system included 10 μl qRT-PCR-Mix, 0.5 μl forward primer, 0.5 μl reverse primer, 2 μl cDNA template and 7 μl ddH2O. The cycle conditions were the following: 95°C for 10 min, and followed by 40 cycles of 95°C for 1 min, 60°C for 30 s. The relative expression level was calculated by the 2- ΔΔCT method.

The HUVEC cells were divided into Control group, Negative Control (NC) group, and miR-16b inhibitor group. The cells were cultured in antibiotics free DMEM medium containing 10% FBS. When cell confluence reached about 70%-90%, the cells were used for transfection. Totally 1.25 ul of 25 pmol/ul miR-16 inhibitor and 1 ul of Lipo 2000 (Invitrogen Co., Carlsbad, CA, USA) were added into EP tubes containing 50 ul DMEM medium, respectively. The 2 tubes were mixed together after 5 min incubation at room temperature. The mixture was added to each well after incubation for 20 min at room temperature. After 6 h, fresh DMEM with 10% FBS was used to replace medium, then cultured for 72 h.

After transfection with miR-16b, each group of cells were washed by PBS twice and digested by trypsin. The cells were then seeded in 96-well plate. Each well contained about 2 × 103 cells and each well had 3 replicates. At 24 h, 48 h and 72 h, CCK-8 solution was added into each well and incubated for 1 h at 37°C. The absorbance of cells was measured at 450 nm wavelength to estimate the proliferation of cells.

Each group of HUVEC cells was collected by centrifugation after trypsin digestion, and then washed by pre-cooled PBS twice. The apoptosis was detected with the ANXN V FITC APOPTOSIS DTEC KIT I (BD Biosciences, Franklin Lakes, NJ, USA) based on the standard protocol of manufactures. Briefly, cells were collected by trypsin digestion. After centrifugation at 500 g for 5 min, the cell pellet was collected. After washing with pre-cooled PBS for 3 times, cells were incubated with Annexin V and PI in the dark. Cell apoptosis was detected by flow cytometry.

Target Scan software was used to analyse target genes of miR-16. For validating whether miR-16 can bind to ATG14, dual luciferase assay was applied. Based on the bioinformatics prediction, the wild-type 3’ UTR and the mutant 3’ UTR of ATG14 were synthesized in vitro and were cloned into the downstream of pMIR-REPORT luciferase vector by Spe-1 and Hind III enzyme. HEK293T cells were co-transfected with agomiR-16 (100 nM) mimics and wild-type ATG14 3’ UTR or the mutant 3’ UTR. After transfection for 24 h, cells were lysed and luciferase intensity was measured by GloMax 20/20 luminometer (Promega, Madison, WI, USA) based on the standard protocol of the luciferase kit (Promega, Madison, WI, USA). The intensity of Renilla was used as control, and the fluorescence intensity in different groups was analysed.

Analysis of autophagy by electron microscope

After transfection with miR-16 inhibitor for 48 h, cells were collected and were fixed by 2.5% glutaraldehyde at 4°C overnight. After washing once with PBS, the 1% osmium tetroxide was added and incubated for 1 h. Then electron microscopy was used to observe autophagy bodies.

The SPSS 16.0 software was used to do statistical analysis. All the data were shown as the mean ± SD. Standard t-test was used to compare difference between groups. P<0.05 was considered as statistically significant. 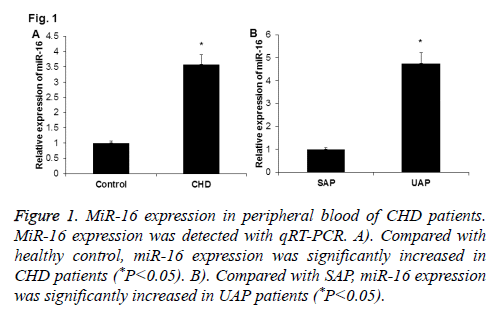 Effects of miR-16 on proliferation of HUVEC 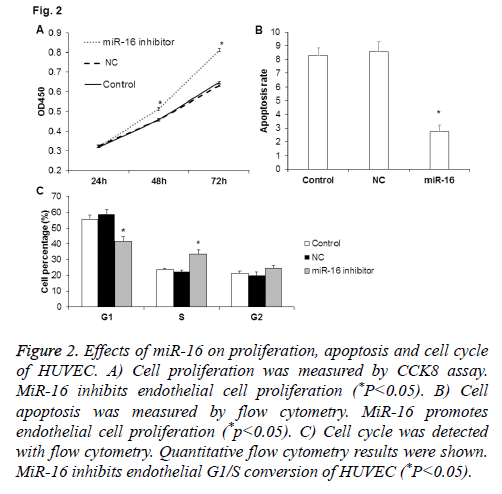 Effects of miR-16 on apoptosis of HUVEC

To check the influence of miR-16 on HUVEC apoptosis, we inhibited miR-16 expression in HUVEC after transfection with miR-16 inhibitor. Then PI/ANNEXIN double staining method was used to detect the changes of cell apoptosis. As shown in Figure 2B, the apoptosis rate in miR-16 inhibitor group was significantly lower than NC group and control group (P<0.05), which indicate that miR-16 may promote the apoptosis of HUVEC.

Effects of miR-16 on cell cycle of HUVEC

To determine the effect of miR-16 on HUVEC cell cycle, flow cytometry analysis was performed. As shown in Figure 2C, the percentage of cells in G1 phase was significantly lower and that in S phase was significantly higher in miR-16 inhibitor group (P<0.05). The results indicate that miR-16 may inhibit proliferation of HUVEC through inhibiting G1/S transition.

ATG14 is directly targeted by miR-16

To determine whether ATG14 was directly targeted by miR-16, dual luciferase assay was performed after co-transfection of agomiR-16 and pMIR-REPORT plasmid. The binding sequence of miR-16 on ATG14 was shown in Figure 3A. As shown in Figure 3B, fluorescence value was significantly down-regulated in cells co-transfected with agomiR-16 and pMIR-REPORT-ATG14-wild type plasmid than in negative control group (P<0.05), while there was no significant difference between group co-transfected with agomiR-16 and pMIR-REPORT-ATG14-mutant and negative control group (P>0.05). The results from dual luciferase assay indicate that miR-16 can regulated ATG14 expression through complementary binding to 3’-UTR of ATG14 mRNA. 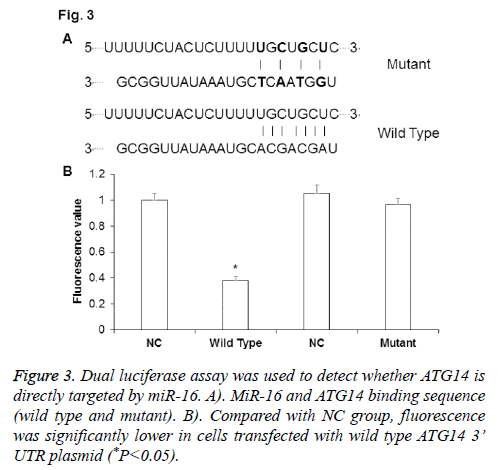 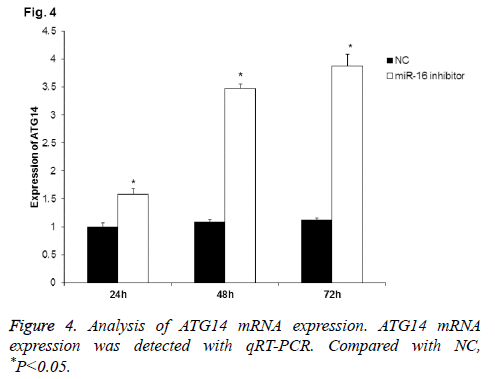 Expression of ATG14 and autophagy associated proteins by Western blot

To explore the function of miR-16 in HUVEC, Western blot was used to detect the expressions of autophagy related proteins after abnormally expressing miR-16. As shown in Figure 5, ATG14 protein expression was significantly increased when down-regulating miR-16 (P<0.05). The autophagy associated proteins Beclin1 was up-regulated, and the ratio of LC3B I/II was significantly increased (P<0.05). These results indicate that miR-16 may suppress cell autophagy of HUVEC. 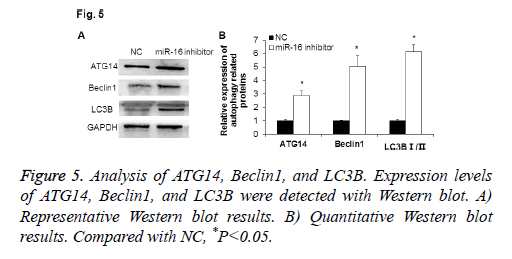 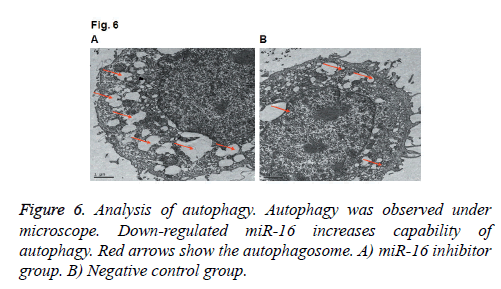 Vascular endothelial cell damage is an initiation process of atherosclerosis, which further leads to CHD, stroke and other complications [20]. It is reported that a variety of miRNA are changed during processes of cardiovascular diseases. For example, Wang et al. found that the expression levels of miR-1, miR-133a, miR-499, and miR-208a were lower in plasma of healthy human, while these expression levels were significantly increased in peripheral blood of acute myocardial infarction patients [21]. Among these miRNAs, miR-208a has better sensitivity and specificity in the diagnosis of myocardial infarction [21]. Other study demonstrated that miR-122 can be used as an early diagnosis marker for liver injury as it was significantly increased in plasma in patients with liver tissue damage [22]. In this study, the expression and the role of miR-16 expression in patients with CHD were analysed.

Furthermore, we found that ATG14 was one of target genes of miR-16 by bioinformatics analysis. ATG14 is one of the autophagy related genes, which plays important roles in the development of autophagy [30]. We hypothesized that miR-16 might inhibit cell proliferation, promote apoptosis and inhibit cell autophagy. After transfection with miR-16 inhibitor, we found that autophagy associated genes (Beclin1, LC3B, and ATG14) were up-regulated, which indicated that cell autophagy was increased. The electron microscopy observation showed that the number of autophagosomes was significantly increased after down-regulating miR-16, which further validated that miR-16 can inhibit the development and progression of cell autophagy.

It is of great importance to identify molecular markers for diagnosis of CHD. For example, soluble ST2, a receptor of IL-33 may be used as a novel cardiac bio-marker [31,32]. Whether miR-16 could be used as a diagnostic marker for CHD is unknown and needs further investigation.

In summary, up-regulated miR-16 in peripheral blood was related to the development and progression of CHD.