Lung cancer is the most common cancer in the world with more than 1 million cases diagnosed every year, and remains the second leading cause of cancer death in both men and women [1]. Advanced Non-Small Cell Lung Carcinoma (NSCLC) accounts for >80% of lung cancer cases [2]. More than half of these patients have developed metastasis at the time of diagnosis and chemotherapy remains the most effective treatment option [3]. Platinum-based doublets are considered to be the standard treatments for NSCLC [4]. The clinical effectiveness of the chemotherapeutic agents used in the treatment of NSCLC is often negated by drug resistance [5,6].

Yes-Associated Protein (YAP) was first discovered and named in 1994, it is a multifunctional intra-cellular junction protein and transcriptional co-activator. YAP plays important roles in regulating signal transduction and gene transcription in normal cells. Studies have confirmed that YAP is the target molecules in Hippo pathway which is a newly discovered cell signal transduction pathway and plays a critical role in regulating the volume and size of organs [7,8]. Researches have shown that YAP was over-expressed in a variety of cancers including liver cancer, gastric cancer, ovarian cancer, prostate cancer, lung cancer, etc., and it was related to the differentiation, proliferation, metastasis, and chemotherapy sensitivity, indicating that YAP is involved in the development of tumor [9-13]. Recent studies indicated that YAP could confer the resistance of cancers to chemotherapy drugs [14], and high expression of YAP was associated with poor patient prognosis [15].

Taxol is an important anti-tumor agent that is particularly effective in the treatment of ovarian and breast cancers, although its usefulness is often hampered by the development of drug resistance. As a new anti-tubulin drug [16], taxol can enhance the binding ability of 14-3-3 protein with YAP without changes of tublins stability and YAP phosphorylation status [17]. This limits the function of YAP as a transcription factor. However, the suppression of taxol on YAP function can be reversed by YAP up-regulation [18].

Based on previous reports, we hypothesized that YAP may be aberrantly expressed in lung cancer cells with chemo-resistant ability and regulation of YAP may affect the chemo-sensitivity of lung cancer cells to chemotherapeutic agents. In this study, we firstly evaluated the YAP expression in A549 (normal lung cancer cells) and A549/TAX (lung cancer cells resistant to taxol). Then YAP-siRNA was transfected into A549/TAX cells to decrease the expression of YAP. The cellular sensitivity to taxol was measured by MTT assay and cell apoptosis was examined by flow cytometry. The underlying molecular mechanism was revealed through QRT-PCR and Western blot.

To determine the drug resistance of taxol to A549 cells, halfmaximal inhibitory concentration (IC50) values were calculated. Cells were seeded into a 96-well plate and cultured in RPMI-1640 media for 24 h, then the cells were treated with various concentrations of taxol (Sigma, Santa Clara, Utah, USA) for 48 h. Subsequently, MTT solution (5 mg/ml) (Eli Lilly, Co. Ltd., Indianapolis, IN, USA) was added to culture medium and incubated at 37°C for 4 h. The Optical Absorbance (OD) at 450 nm was measured using a SynergyTM 2 Multi-function Microplate Reader (Bio-Tek Instruments, Winooski, VT, USA). Each experiment was independently repeated three times.

After certain treatment, qRT-PCR was performed for gene mRNA expression level detection. GAPDH acted as an internal control. Total RNA was obtained from cells using TRIZOL reagent (Takara, Japan) in accordance with the manufacturer’s instructions. Then, RNA was transcribed into cDNA using RTPCR detection kit (Invitrogen, Carlsbad, CA, USA) according to manufacturer’s instructions. Real-time PCR was performed to analyse the synthesized cDNA and the conditions were 95°C for 10 min, followed by 40 cycles of 95°C for 10 s, 60°C for 60 s. All the primers were performed by Sangon Biotech (Shanghai, China). The primer sequences of real-time PCR are as shown in Table 1.

All quantitative data were displayed as the mean ± Standard Deviation (SD). Student's t-test was used to identify significant differences in multiple comparisons. For all statistical analyses, P<0.05 was considered statistically significant.

To confirm the taxol resistant ability of A549/TAX cell line, which was obtained from ATCC, MTT assay were firstly performed on A549 and A549/TAX cell lines after treated with taxol. As shown in Figure 1A, a significant inhibiting effect of taxol on cell viability was observed in A549 cell line, thus suggesting that A549 cells were more sensitive to taxol. That is, the obtained A549/TAX cell line was resistant to taxol as expect. To investigate the biological role of YAP in the taxol resistance of non-small cell lung carcinoma, we compared the expression level of YAP in A549 and A549/TAX. The results were shown in Figures 1B and 1C. Compared with A549 cells, the YAP expression was significantly upregulated in A549/TAX cells, indicating a possible involvement of YAP in drug resistance in lung cancer, especially NSCLC. 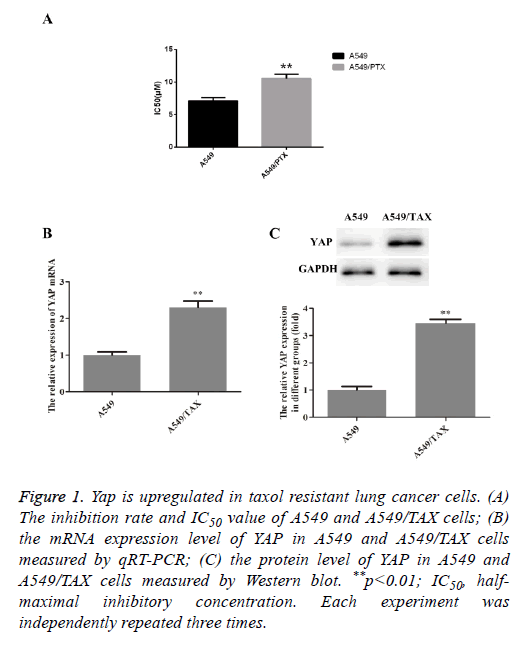 Decrease of YAP mRNA and protein expression after YAP-siRNA 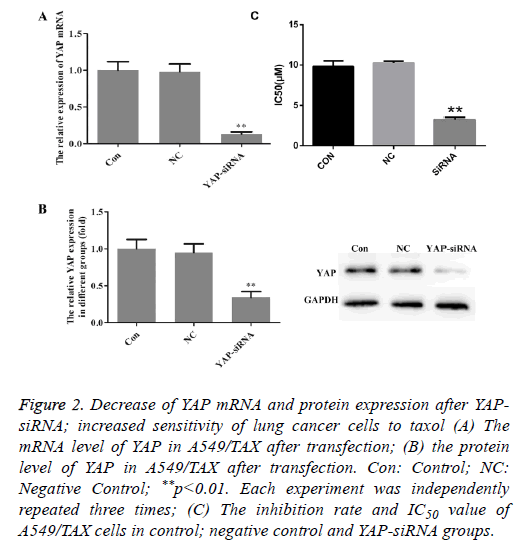 Figure 2: Decrease of YAP mRNA and protein expression after YAPsiRNA; increased sensitivity of lung cancer cells to taxol (A) The mRNA level of YAP in A549/TAX after transfection; (B) the protein level of YAP in A549/TAX after transfection. Con: Control; NC: Negative Control; **p<0.01. Each experiment was independently repeated three times; (C) The inhibition rate and IC50 value of A549/TAX cells in control; negative control and YAP-siRNA groups.

MTT assay was utilized to determine the change of sensitivity to taxol after silence of YAP expression in A549/TAX cells. As shown in Figure 2C, a significant inhibiting effect of taxol on cell viability was observed in YAP-siRNA transfection group, indicating that YAP knockdown significantly increased the sensitivity of A549/TAX cells to taxol. 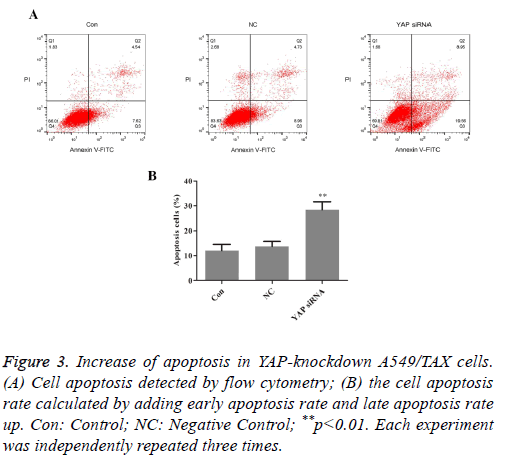 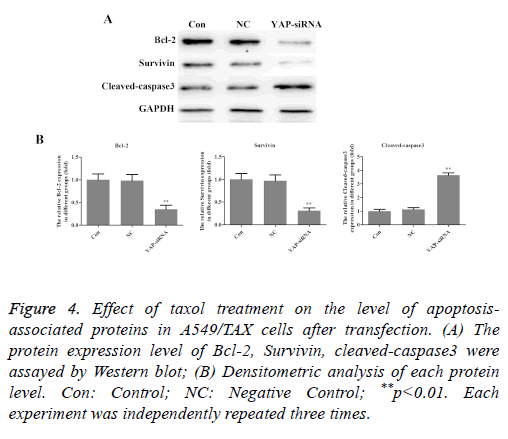 Figure 4: Effect of taxol treatment on the level of apoptosisassociated proteins in A549/TAX cells after transfection. (A) The protein expression level of Bcl-2, Survivin, cleaved-caspase3 were assayed by Western blot; (B) Densitometric analysis of each protein level. Con: Control; NC: Negative Control; **p<0.01. Each experiment was independently repeated three times.

To explore the underlying molecular mechanisms of the roles that YAP played in taxol resistance, the expression of drug resistance related genes, MDR1, MRP1 and BCRP was examined in A549/TAX cells. As illustrated in Figure 5, both the mRNA and protein levels of MDR1, MRP1 and BCRP were decreased in A549/TAX YAP-siRNA cells. These findings suggested that YAP may induce taxol resistance through regulating drug transportation. 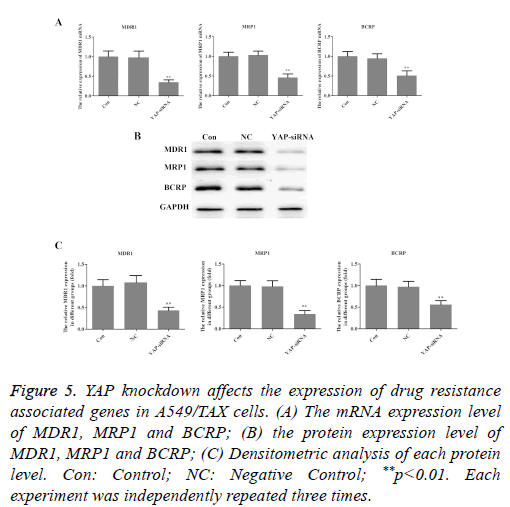 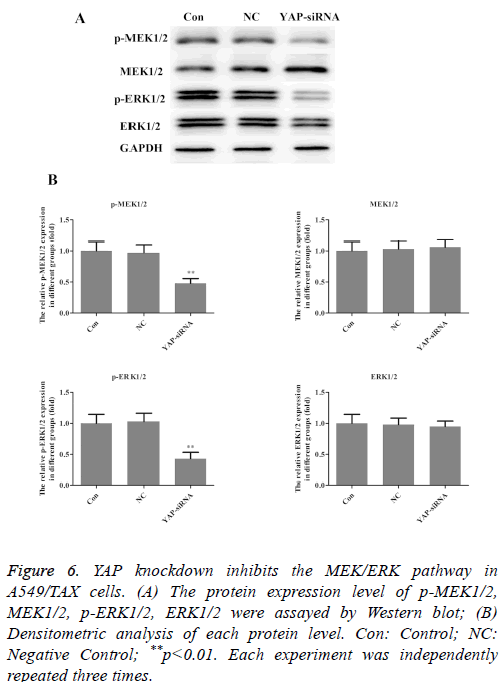 Drug resistance is the major factor that affects the efficacy of chemotherapy in patients with lung cancer. There are many factors that affect the resistance of NSCLC drug resistance, including the increases of the expression of resistant multi-drug (MDR) gene, multidrug resistance associated protein (MRP) genes and their product, as well as the decreased expression of Topoisomerase II (Topo II) and Glutathione (GSH) and the increased expression of Glutathione S Transferase (GST) system. In addition, studies have shown that the abnormal expression of related factors in cell signal transduction, the abnormal of DNA repair in tumor cells and the aberrant expression of other related genes are closely related to lung cancer drug resistance [22]. Therefore, exploring novel therapeutic targets and effective molecular markers to predict the sensitivity of patients to drugs is extremely critical for NSCLC treatment.

YAP, a critical effecter of Hippo signaling pathway, is one of the major transcription activation factors and is highly active. Studies have suggested that YAP is highly expressed in both nuclear and cytoplasm of lung cancer cells and involved in the development of lung cancer [23]. Recently, a growing number of evidence indicated that the expression of YAP may associate with multi-drug resistance [24]. However, the relationship of YAP gene expression and Taxol chemoresistance in human lung cancer cells is still unclear. In the present study, the expression of YAP was significantly elevated in A549/TAX cell line both in protein and gene levels, thus indicating a possible involvement of YAP in drug resistance in lung cancer.

As an effective antitumor drug, taxol is an effective therapeutic agent to various tumor cells and it can limit the function of YAP as a transcription factor [25]. In order to precisely and definitely elucidate the role of YAP on the resistance of taxol in lung cancer, we suppressed YAP gene by siRNA in A549/TAX cells and then examined the chemo-sensitivity to taxol of A549/TAX cells. We found that YAP knockdown significantly increased the sensitivity of A549/TAX cells to taxol. Intrinsic or acquired drug resistance limits the effectiveness of chemotherapy. One of the most studied mechanisms of drug resistance in cancer cells is associated with altered anticancer drug transport, mediated by members of the ATP-Binding Cassette (ABC) superfamily of transport protein such as Multidrug Resistance Protein-1 (MRP1) and Breast Cancer Resistance Protein (BCRP) [26-28]. This resistant type has been termed Multidrug Resistance (MDR) [29]. Multi Drug Resistant Protein 1 (MDR1) has been linked to multi drug resistance and disease progression in cancers such as NSCLC [30]. Overexpression of MRP1 has been detected in a variety of tumor types, and has also been associated with drug resistance or poor patient outcome in lung cancer [31]. BCRP, which is a novel ABC transport protein, functions as an energy-dependent efflux pump. Elevated expression of BCRP in vitro causes resistance against at least two classes of anticancer drugs, anthracyclines and topoisomerase I inhibitors [32]. In the present study, we found that both the mRNA and protein levels of MDR1, MRP1 and BCRP were decreased in A549/TAX YAP-siRNA cells, thus suggesting YAP may induce taxol resistance through regulating drug transportation.

Apoptosis is cell suicide under the control of the activities of individual development. Apoptosis disorder is an important reason for tumorigenesis. caspases play the role of initiators and executioners in programmed death. And caspase-3 is directly responsible for cell demise [33]. As a well-known member of the inhibitor of apoptosis protein family, Survivin is completely down-regulated and undetectable in normal adult tissue and becomes prominently overexpressed in many human malignancies, including NSCLC [34]. The anti-apoptotic proteins Blc-2 serving as a binding groove for pro-apoptotic factors belongs to the Bcl-2 family, which is regarded as a central regulator of the apoptosis process [35]. Literatures have revealed one of the main mechanisms of chemoresistance is related to defects in the apoptotic pathway especially the alteration of apoptotic markers caspase-3, survivin and Blc-2 [36,37]. In this study, YAP knockdown significantly decreased the expression level of Bcl-2 and survivin in A549/TAX cells, while the expression level of cleaved-caspase-3 was increased remarkedly, which indicating YAP may involve in the regulation of cell apoptosis in A549/TAX cells.

The MEK/ERK signaling pathway is one of the bestcharacterized kinase cascades in cancer cell biology [38]. MEK1 and MEK2 are tyrosine and serine/threonine dualspecificity kinases and subsequently phosphorylate ERK1 and ERK2, resulting in their activation. Upon activation, they activate multiple nuclear and cytoplasmic targets (>600), including transcription factors, kinases, phosphatases and cytoskeletal proteins [39]. Taru et al. [40] have revealed that the activity of MEK/ERK pathway positively influences drug resistance and YAP can be regulated at several levels to promote resistance to multiple targeted therapies including through MEK/ERK pathway. In our experiments, we found that phosphorylation of MEK and ERK were reduced in YAPsiRNA group, which suggested YAP knockdown inhibits the MEK/ERK pathway in A549/TAX cells.

In conclusion, we show that YAP knockdown could reverse the resistance of A549/TAX cells to TAX. Therefore, YAP may be used as a novel therapeutic target in the treatment of lung cancer in the future, as well as an effective molecular marker to predict the sensitivity of patients to drugs, which can better guide the individual treatment, improve the efficacy of chemotherapy.