Role of total antioxidant capacity and lipid peroxidation in fertile and infertile men.

Infertility is a worldwide problem and approximately 8- 10% of couples within reproductive age group are infertile. It is estimated that globally 60-80 million couples suffer from infertility every year, of which probably between 15-20 million are in India alone. In spite of extensive research, no identifiable cause can be found in 25% of infertile males [1].

Oxidative stress has become the focus of interest as a potential cause of male infertility. High concentration of reactive oxygen species (ROS) was detected in the semen of 30-80% infertile men. Normally, equilibrium exists between ROS production and antioxidant scavenging activities in the male reproductive tract. Under physiological conditions, spermatozoa produces small amount of ROS, which are needed for capacitation, acrosome reaction and fertilization. However, excessive amount of ROS produced by leukocytes and immature spermatozoa cause damage to the normal spermatozoa by inducing lipid peroxidation and DNA damage [2]. Thus, reduction of oxidative stress may be effective in the treatment of male infertility.

It has been postulated that oxidants interfere with normal sperm function via membrane lipid peroxidation and fragmentation of nucleic acids, which result in sperm dysfunction. Due to membrane polyunsaturated fatty acids (PUFAs) and their capacity to generate ROS, human spermatozoa are highly susceptible to oxidative stress [4]. The more important marker of lipid peroxidation is MDA. This by-product has been used in biochemical assays to monitor the degree of peroxidative damage sustained by spermatozoa. The results of such assay exhibit an excellent correlation with the degree to which sperm function is impaired. High levels of seminal MDA represent increased lipid peroxidation rates, which diminishes fertility [5].

The quantification of antioxidants is a complicated, expensive & time-consuming task. In comparison, single measurement of total antioxidant capacity (TAC) is less costly and also useful in routine practice. The oxidative stress (OS) adversely affects sperm function by altering membrane fluidity, permeability and impairs sperm functional competence. Therefore, the purpose of our present study was to evaluate the TAC & MDA profiles of infertile men and their impact on semen parameters.

Forty infertile subjects were selected from the couples attending the infertility clinic in the Department of Obstetrics & Gynaecology. Fifteen normal healthy men were taken as control. A total of 55 subjects were divided into four groups

Infertility of this group was defined mainly by sperm concentration (< 20 × 106 sperm/ml), with normal levels for sperm motility (> 30%) and morphologically normal sperm (> 30%).

This study group was consisted of asthenozoospermic men in which infertility was determined less than normal levels for sperm motility (< 30%), with normal sperm morphology (< 30%) and sperm concentration (> 20 × 106 sperm/ml).

Subjects of this group presented sperm concentration >20×106 spermatozoa/ml with >30% sperm motility and <30% normal forms of sperms.

Inclusion and exclusion criteria for selection of infertile males

Inclusion criteria: Subjects’ age should be between 25- 40 years. Couples living together with regular unprotected coitus for a reasonable period of time and without contraception. Semen examination showing normal pH, normal viscosity with spermatozoa concentration >20 million /ml, motility >30% and >30% spermatozoa should be normal.

Exclusion criteria: A detailed medical history was performed for all studied cases. Subjects currently on any medication or antioxidant supplementation were not included. In addition, subjects with testicular varicocele, genital infection, leukocytospermia, chronic illness and serious systemic diseases, smokers and alcoholics were excluded from the study because of their well-known high seminal ROS levels and decreased antioxidant activity.

Study consent: A written consent of each subject was taken after explaining the aims and objectives of the study and its benefits on individual and society. The study was approved by the Ethical Committee of the University.

Total progressive motility was defined as the combination of ‘Type a’ rapid motility and ‘Type b’ slow progressive (at least 30% of sperm should have normal motility (categories a + b). Sperm concentration was determined with an improved Neubauer Hemacytometer® counting chamber and normal values of concentration were “> 20 × 106 sperm/ml".

Total Antioxidant Capacity measurement [7]: TAC was measured spectrophotometrically (UV Spectrophotometer, Shimadzu, Japan) at 532 nm. The reaction mixture contained 0.5 ml of phosphate buffer (100m mol/ l, pH 7.4), 0.5ml of sodium benzoate (10m mol/l), 0.2ml of ethylenediaminetetraacetic acid (Fe- EDTA), 2m mol /l EDTA + 2m mol/l of ferric ammonium sulphate (FeNH4(SO4)2, 0.2 ml of H2O2 (10m mol/l) and 20μl of seminal plasma was incubated for 60 minutes at 37ºc. The reaction was then stopped by addition of 1 ml of 20% acetic acid. Each sample also served as its own control. TAC of the sample was then calculated by the following formula:

Assessment of oxidative stress by measurement of Lipid Peroxidation [8]: Lipid peroxidation was measured by determining the MDA production using thiobarbituric acid (TBA) method. After liquification, semen samples were centrifuged at 4000 rpm for 10 min to get seminal plasma. Then, 0.1 ml of seminal plasma was added to 0.75 ml of TBA reagent (0.8 g of 2-TBA dissolved in 80 ml of distilled water with 0.5 ml of NaOH). Perchloric acid (7%) was added to this mixture in order to adjust the pH = 7.4). This mixture was heated for 1 hour at 95°C in a warm water bath. After cooling, the tube was centrifuged for 10 min at 4000 rpm and the supernatant's absorbance was read on a spectrophotometer at 535 nm.

Mean ± SD were calculated for each of the quantitative value. The differences were considered to be significant at values of P <0.05. Pearson's correlation was performed to examine the correlation between parameters and semen quality. 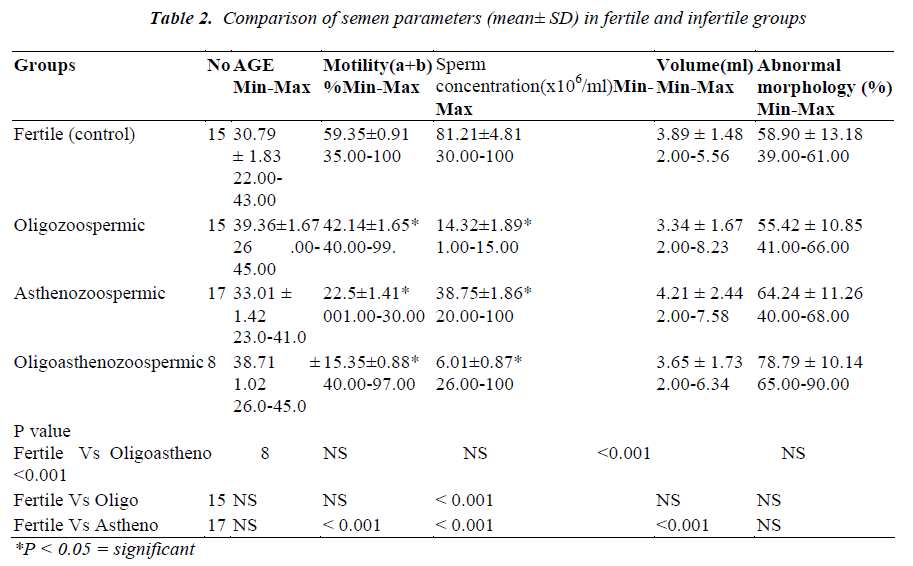 Rates of seminal MDA were negatively associated to sperm motility (r = -0. 24) and sperm concentration ( r = - 0.35). There was a positive correlation between seminal lipid peroxidation and the percentage of abnormal morphology (r = 0.19) (Table 4). 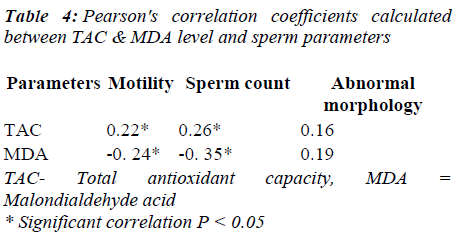 The relationship between total antioxidant capacity and male infertility has been a subject of investigation for a long period of time. Mahafouz et al. [9] observed that fertile subjects showed higher TAC value in comparison to infertile men. They proved that fertile donors showed higher TAC values (median and range: 1700; 1440-2290 microM); compared to infertile patients: (1310; 1040- 1600 microM). The best cut-off to distinguish between fertile (controls) and infertile subjects was 1420 μM. In contrast, our findings confirmed the findings of Koca et al. [10] that seminal plasma TAC level is lower in asthenozoospermic and asthenoteratozoospermic groups in comparison to control group. The decreased level of TAC in seminal plasma may be one of the causes of male infertility. They also reported a positive correlation between seminal plasma TAC and sperm motility. Our findings, moreover support the results of Khorrowbeygi [11] that levels of TAC have a positive correlation with sperm motility (r=0.45, p<0.05) and morphology. Their study showed that decreasing seminal plasma antioxidants status especially TAC might have significant effect on impaired sperm function. Siciliano et al. [12] reported that non-enzymatic antioxidant capacity does not alter in asthenozoospermic males than normozoospermic males.

Increased formation of ROS has been correlated with reduction of sperm motility [15]. The link between ROS and reduced motility may be explained by a cascade of events that result in a decrease in axonemal protein phosphorylation and sperm immobilization [16]. Another hypothesis is that H2O2 can diffuse across the membranes into the cells and inhibits the activity of enzymes such as G6PDH leading to a decrease in the availability of NADPH and an accumulation of oxidized glutathione and reduced glutathione. These changes can cause a decrease in the antioxidant defences of the spermatozoa, which ultimately leads to the peroxidation of membrane phospholipid [17].

Guzman et al. [18] also observed that there is an inverse significant correlation between seminal plasma TAC and ROS levels. They suggested that the inverse correlation between TAC and ROS might be associated with an increase in the consumption of soluble, non-enzymatic antioxidant in seminal plasma, which results from overproduction of ROS. The findings of the present study suggested that decreased antioxidant capacity in infertile groups may be due to either increased ROS production or insufficient antioxidant capacity

Altered antioxidant status was observed in the seminal plasma of infertile men which is responsible for oxidative damage and makes the sperm highly susceptible to lipid peroxidation. Lipid peroxidative degradation of sperm membrane may be responsible for abnormal sperm motility, concentration and morphology. MDA production reflects the peroxidation of membrane polyunsaturated phospholipids [19, 20]. Our results showed a significant increase in the amount of seminal MDA in abnormal groups compared to normozoospermic. Our results were corroborative with Hesham et al. [21] and Ben Abdallah et al. [22] who reported that MDA content was elevated in oligozoospermic and asthenozoospermic groups. However, there was controversy about seminal MDA activity and sperm quality. We showed that higher seminal MDA levels were negatively associated with sperm motility and sperm count. A positive relationship was observed between increased lipid peroxidation and abnormal sperm morphology, which was similar with the findings of Suleiman et al. [23]. Increased MDA levels in seminal plasma of abnormal groups could represent the pathological impact of lipid peroxidation on the spermatozoa membrane and consequently on sperm motility and viability.

A negative correlation of motility with seminal MDA indicates that sperm membrane lipid peroxidation affects the fluidity and mobility of sperm axoneme. This affects functional competence of the sperm and acts like a biological safeguard. It was also shown that increased MDA levels in the abnormal groups could represent the pathological effects of lipid peroxidation on sperm function. Present findings suggested that routine determination of antioxidant status of semen during infertility investigation is useful. Furthermore, future research should focus on cohort study, with genetic susceptibility and their repercussions on semen quality.