Paraffin-embedded tissue samples from 60 patients with clinical stage I-IIIA NSCLC were obtained from China-Japan Union Hospital of Jilin University from January 2013 to February 2014. There were 22 women and 38 men in 60 patients. The patient's age was from 36 to 73 years old. The average age was 58.78 years. All the samples were confirmed by histopathological examination. The results found that there were 39 cases of squamous cell carcinoma and 21 cases of adenocarcinoma. All of the samples were installed strictly in accordance with the requirements of medical ethics Association, and obtained the permission of patient's own or family member.

Human lung cancer samples were fixed by 10% formaldehyde for 30 min and desiccated and embedded in paraffin. Xylene was used to remove paraffin for 10min, and 100%, 95%, 80% and 75% ethanol solution was used to replace xylene. Sections were washed with distilled water, stained with hematoxylin for 1 min. Dehydrated, transparent, mounting, camera.

Sections of human lung cancer tissue were sliced and roasted for 1 hour at 80°C. After deparaffinization and rehydration, antigen unmasking was performed by heating sections in 10 mm. The sections added to human Rock 1 antibody (1:200) at 4°C overnight, and washed three times with PBS and incubated with SP Kit (USA) for 20 min in light-shielded conditions. Sections were mounted with antifade reagents, covers lipped, and visualized microscopically.

Total RNA (mRNA) was extracted from Cancer and adjacent tissues according to the manufacturer's recommendations of TRIzol reagent (Invitrogen, Carlsbad, CA). 1 μg sample of total RNA was reverse transcribed to complementary DNA (cDNA) with oligo (dT) primers. We used amplified PCR fragments spanning different exons to prevent amplification of contaminated genomic DNA. The sense primer of ROCK1 was AAAATTGTGTGAGGAGGACATGG and the antisense primer was of TTCATCCCAACATTCTTGGATCT, which products were 279 bp in size. The house keeping gene GAPDH was used as an internal control. The sense primer was AGAAGGCTGGGGCTCATTTG and the antisense primer was AGGGGCCATCCACAGTC TTC, which products were 285 bp in size.

All statistical analysis was performed using SPSS software version 15.0. The expression of Rock 1 was analyzed in triplicate. Numeric data were shown as means ± SD. Statistical significance between groups was analyzed by Student's t-test and one-way ANOVA. P<0.05 was considered statistically significant.

The patients were diagnosed by CT. Results showed that the patient was diagnosed with a small lung cancer. This diagnosis has laid a foundation for exploring the expression of Rock1 in lung cancer (Figure 1). 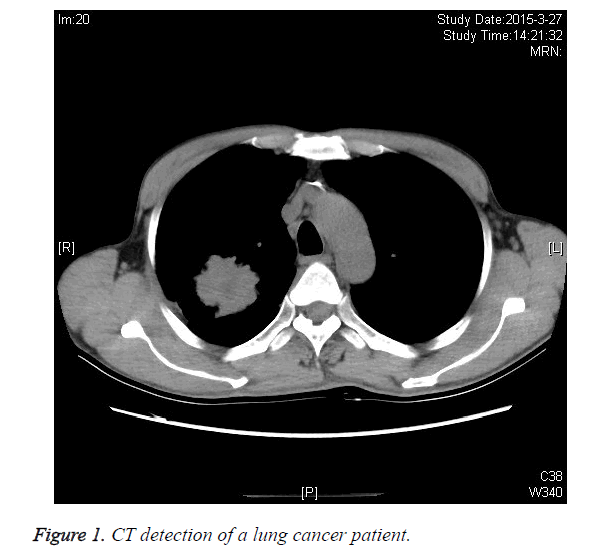 HE staining of squamous cell carcinoma

Sections of lung cancer were embedded in paraffin and stained, and then which sections were observed under the light microscope. The results showed that there was a part of the pearl or the partial horn within the nest of the cancer. The pathological mitotic figures were more obvious than the abnormal cells (Figure 2). 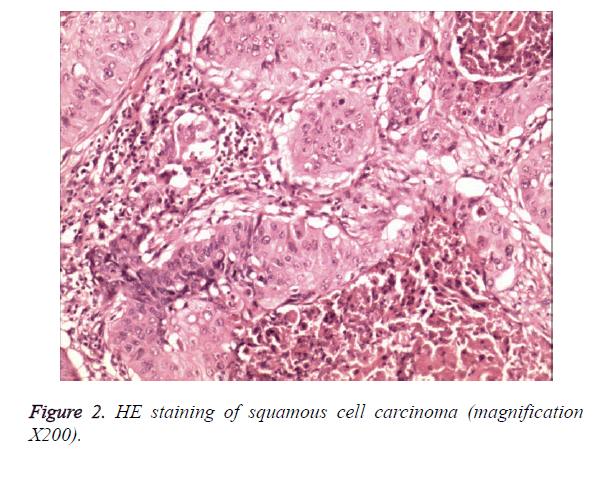 HE staining of adenocarcinoma

Sections of lung cancer were embedded in paraffin and stained, and then which sections were observed under the light microscope. The results showed that Adenocarcinoma cells arranged in adenoid or papillary. The atypia of cell was more obvious (Figure 3). 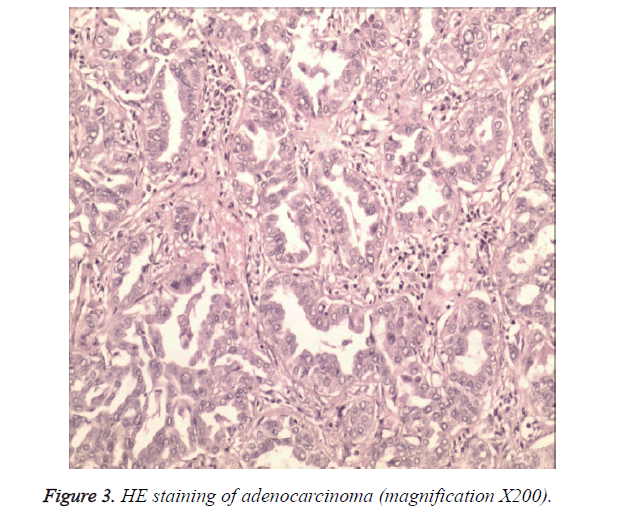 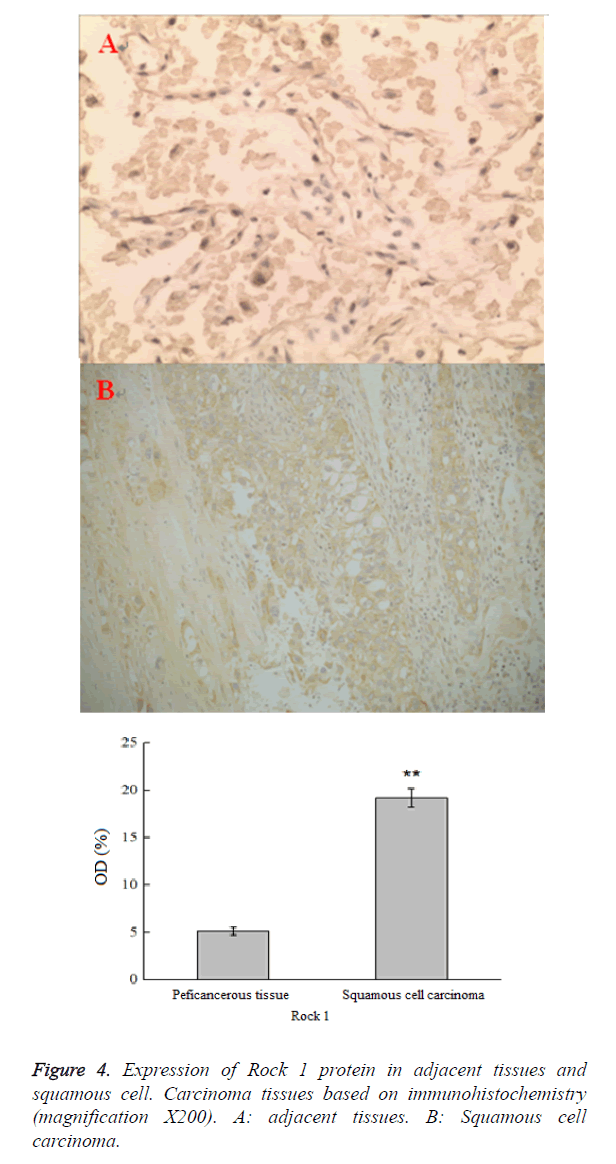 Expression of Rock 1 in lung adenocarcinoma 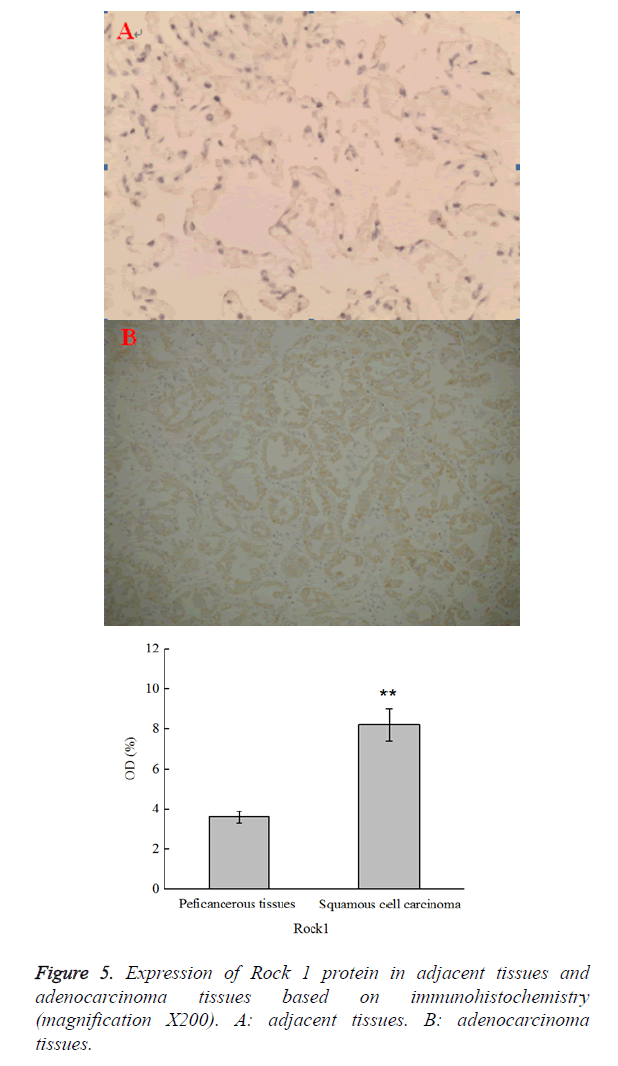 As shown in Table 1, the expression of Rock 1 mRNA in lung cancer was increased as compared with Paraneoplastic (P<0.01). These results showed Rock 1 have played an important role in squamous cell carcinoma and adenocarcinoma.

Table 1. the radio of Rock I/GAPDH on Squamous cell carcinoma and Adenocarcinoma.

The development of tumor involves in many factors, such as activating of oncogene, invalidating of cancer suppressor genes and abnormal expressing of apoptosis genes [15]. Previous studies found that local invasion and metastasis of tumor cells included the complex biological processes of cell adhesion, the decomposition of the matrix around the cell, the invasion and metastasis [16]. In addition, the infiltration and metastasis of malignant tumor mainly depend on the migration of cells [17]. The change of cell morphology and adhesion is an important part of its ability to exercise and realize the infiltration and metastasis [18]. A large number of studies have shown that ROCK protein plays a significant role in the development of tumor [19]. Expression of ROCK was increased obviously in osteosarcoma, hepatocellular carcinoma, skin cancer tissue [20-21]. Effect of the substrate on many ROCK protein play a significant role in tumor development and related phenotypes, at the same time ROCK inhibitors can inhibit ability to migrate to a wide variety of tumor cell lines. ROCK protein involved in regulating tumor cell survival and apoptosis, invasion and metastasis of malignant tumor cells and other biological behavior [22].

In conclusion, the current study demonstrated that the expression of Rock 1 was significantly increased in NSCLC tissue and the relationship between Rock 1 protein and non-small cell lung cancer.