The aim of this study was to investigate the proliferation, adhesion, and migration function of chloride ion channels in HLEC B-3, a human lens epithelial cell line, and provide experimental basis for studying the mechanism of human after-cataract as well as the effective methods for controlling and treating it. MTT and Scratch assay methods were applied to detect the proliferation, adhesion, and migration of HLEC B-3 after applying 5, 10, 20, 50, 100, and 200 μmol/L of chloride ion channel blockers (NPPB). In the cell proliferation experiment, no apparent difference was found in the first 12 and 24 h after treatment with 10, 20, 50, 100 and 200 μmol/L NPPB or 48 h after treatment with 20, 50, 100 and 200 μmol/L NPPB. The cell proliferations were obviously inhibited compared with the control group(without NPPB treatment), and the difference was significant (P < 0.05 or P < 0.01). Cell adhesion experimental results showed that when the cells were treated with 10, 20, 50, 100, and 200 μmol/L NPPB for 12 or 24 h, cell adhesions were obviously inhibited. The difference was very significant (P < 0.05 or P < 0.01) compared with the control group. The activity of chloride ion channels can inhibit the proliferation, adhesion, and migration of LECs; therefore, inhibiting its activity can control the occurrence of human after-cataracts.

The chloride ion channels (CIC), located in the cell membrane or intracellular membrane, are made up of proteins that can transport chloride and other anions [1,2]. They are widely distributed in different tissues and cells and participate in maintaining the dynamic balance of cell volume, proliferation, secretion, and cell death, as well as in the regulation of all kinds of cell functions [3,4]. Studies have found that most CICs also exist in epithelial cells such as the corneal, ciliary, lens, and retinochrome epithelia of ocular tissues [5,6]. CICs figures prominently in the liquid transport of lens epithelial cells (LECs) and in maintaining lens transparency [7].

Cataract is one of the leading causes of human blindness. Current preferred methods for cataract treatment include extracapsular cataract extraction, phacoemulsification, and artificial lens implantation. However, issues such as surgical trauma and after-cataract, which are caused by rebounding proliferation, migration, and differentiation of residual LECs, often emerge because of such treatment methods, which seriously affect the visual recovery of patients [8]. Statistics on infant patients reports a 100% incidence rate of after-cataract induced by surgery [9-11].

LECs are single-layer cells located close to the anterior surface of the lens capsule. These cells are most actively involved in metabolism and are the only cells in the lens with the ability to divide. They are responsible for the growth, differentiation, and damage repair of the lens and primarily functions in maintaining lens transparency and internal environment stability [12,13]. Studies have shown that the formation of after-cataract originates from abnormal proliferation, differentiation, and migration of LECs [14]. Therefore, studying the function of CICs in the LECs is significant in revealing the mechanism of the after-cataract as well as the effective measures to control or treat it. In this paper, the effect of CIC is presented in the proliferation, adhesion, and migration process of LECs, which provides an experimental basis of studying the mechanism of after-cataract.

HLEC B-3 cells were obtained from the Harbin Medical University (Harbin, China), cultured in a DMEM/F12 medium (Life Technologies Co., Taiwan, China), and supplemented with 10% inactivated FBS (Hangzhou Sijiqing Biological Engineering Materials Co. Ltd., Hangzhou, China) at 37 °C and in the presence of 5% CO2. Cell viability was determined using a 0.4% Trypan blue solution (Sigma-Aldrich Inc., Wisconsin, USA). Cell synchronization was achieved via the serum starvation method. After 2 to 3 days, the medium was refreshed once. Upon reaching full confluence, the cells were digested with 0.25% trypsin (Beijing Dingguo Biotechnology Co. Ltd., Beijing, China) and respectively cultured in different cell plates until the cell proliferation reached 70% or 80% completion for the experimental study.

Detection of HLEC B-3 proliferation

HLEC B-3 cells were cultured in individual wells on three different 96-well plates (8×103/well) at 37 °C in a 5% CO2 incubator. After 24 h, all wells were filled with 200 μL of the medium at final concentrations of 0, 5, 10, 20, 50, 100, and 200 μmol/L NPPB (Sigma-Aldrich Inc., Wisconsin, USA), respectively, with each concentration replicated in three wells. After the cells were cultured for 12, 24, and 48 h, each well was added with 20 μL of thiazolyl blue tetrazolium bromide (MTT, Sigma-Aldrich Inc., Wisconsin, USA) solution (5 g/L) and incubated at 37 °C with a CO2 incubator. Four hours later, the supernatants of each well were removed, 150 μL of dimethyl sulfoxide (DMSO, Beijing Dingguo Biotechnology Co. Ltd., Beijing, China) was added, and the plates were agitated by shaking for 10 min at a constant speed. Finally, the optical density (OD) of each well was determined at a wavelength of 570 nm (Enzyme Microplate Elx800), and the proliferation rates were calculated and compared.

Detection of HLEC B-3 adhesion

The cells were cultured and treated using a similar methodology as in section 2.2. After culturing the cells for 12, 24, and 48 h respectively, each well was gently washed twice with PBS to remove the supernatant cells. Finally, the optical density (OD) of each well was determined via MTT assay, and the adhesion rates were calculated and compared.

Detection of HLEC B-3 migration

HLEC B-3 cells were respectively cultured in individual wells on 24-well plate (1×105/well) at 37 °C in a CO2 incubator until the cells fully covered the wells. The central bottom of each well was then streaked using a special tip. After the wells were gently washed twice with PBS, the scratch width (Wi) of each well was captured by a 100X optical microscope. The wells were then filled with 500 μL of the medium at final concentrations of 0, 5, 10, 20, 50, 100, and 200 μmol/L NPPB. Cultivation was then resumed for 24 and 48 h. The scratch widths Mi for 24 h and Ni for 48 h were measured, and the relative migrations ratio of the cell was calculated using the equation:

Where i refers to the different concentration groups, and i=0 for the blank group.

Data was analyzed using the SPSS11.5 software and presented as mean and variance ( 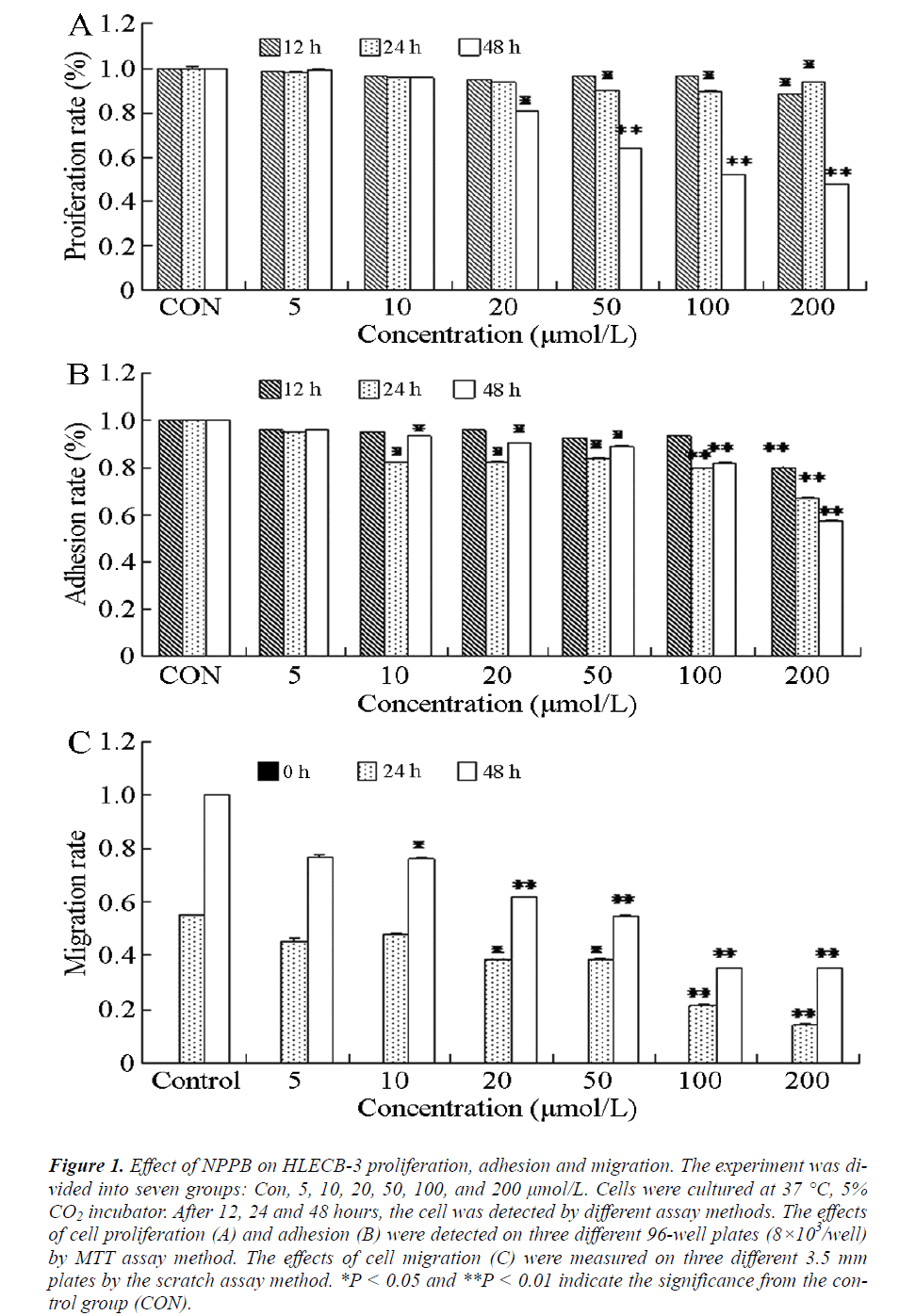 To prove further the effect of CIC in after-cataract formation and to elucidate its mechanism, MTT assay was performed to detect the adhesion effect of NPPB. The experimental results are shown in Figure 1B. After 12 h of treatment with 200 μmol/L NPPB, cell adhesion was significantly inhibited (P < 0.01) compared with the control group. Cell adhesion was also inhibited (P < 0.05) by treatment with 10, 20, and 50 μmol/L NPPB for 24 h. The difference between 100 μmol/L and 200 μmol/L NPPB was even more significant after 24 h treatment (P < 0.01). Treating the cells with different concentrations of NPPB for 48 h yielded the same results as the 24 h experiments. These results indicated the time- and concentrationdependence of the human LECs adhesion inhibition by NPPB, with the highest inhibition at concentrations more than 100 μmol/L NPPB in the 24 h treatment.

Cell migration is an important indicator in estimating cell viability and functions prominently, in multiple physiological and pathological processes. Abnormal migration of LECs can lead to human after-cataract [17]. In the present study, the migration effect of HLECB-3 was detected via scratch assay after adding NPPB. In Figure 1C, cell migration was significantly inhibited (P < 0.05) after subjecting the cells to 24 h treatment with 20 and 50 μmol/L NPPB or 48 h with 10 μmol/L NPPB. The most significant cell inhibition effect (P < 0.01) was observed in cells treated with 100 μmol/L and 200 μmol/L NPPB for 24 h or with 20, 50, 100, and 200 μmol/L NPPB for 48 h. These results showed that different concentrations of NPPB could variably inhibit human LECs migrations at different durations of treatment. The inhibition was greatest at concentrations of more than 20 μmol/L NPPB for 48 h.

After-cataract, which is also known as secondary cataract, is a common disease after extracapsular cataract extraction and perforated trauma and is the major cause of malignant postoperative vision. Currently, the pathogenesis of after-cataract is unclear because of the migration, proliferation, and collagen deposition of remaining LECs post-operation as well as the thickened basement membrane and tissue fibrosis [18]. Recent studies have revealed the complexity and diversity of CIC and have shown that the transformation of function of CIC directly influences the ionic balance of the cell exterior and interior and results in disease progression [19,20].

NPPB is a sensitive CIC blocker that can hinder Cl- by inducing the lipid membrane to change the channel protein conformation [21]. NPPB could inhibit the proliferation of ovarian cancer cell in a concentration-dependent manner, increase the amount G0-phase cells amount, and decrease the number of S-phase cells. Cell proliferation is inhibited when CIC is blocked [22]. In our experiment, NPPB was used to investigate the function of CIC on human LECs proliferation. The results showed that after the LECs were treated with different concentrations of NPPB for 24 or 48 h, cell proliferation was significantly inhibited. Decreasing the duration of treatment with NPPB could alleviate this inhibition. These results suggest that CIC could regulate the proliferation of LECs.

In summary, our results prove that ClC functions prominently in the occurrence and development of aftercataract. The inhibition of CIC may prevent posterior capsular opacity as well as improve and restore vision. This study not only offers experimental basis for further investigations on the mechanism of the human after-cataract but also demonstrates the importance of effective control, treatment, and prognosis of after-cataract development.