A total of 198 patients of various bone disorders like osteoporosis, chronic renal failure, fractures and bone malignancy attending the OPD between October 2002 to May 2005 at Dr. D.Y. Patil Medical College, Hospital and Research Centre and Command Hospital, Pune were selected for the study. Assessment of the basal serum levels of biochemical markers like Tartarate resistant acid phosphatase (TrACP), Malondialdehyde (MDA), Alkaline phosphatase, free calcium (Ca++), Inorganic phosphorus (Pi), Superoxide dismutase (SOD) and erythrocyte reduced glu-tathione (GSH) was done. Then, the patients were divided into groups A (Vitamin E- Evinal 400 mg), B (Vitamin C- Celin 500 mg) and C (E+C) for administering antioxidants over a period of 90 days. Biochemical markers were reassessed in all the groups after 45 and 90 days of supplementa-tion. The results revealed that after 90 days supplementation there was significant reduction in serum MDA and serum ALP as compared to basal levels (p<0.001) in all three groups. Serum SOD and erythrocyte GSH showed significant increases compared to basal level (p<0.001 ) in all three groups . Serum TrACP was significantly reduced in group A and B (p<0.001) as compared to basal levels. Serum free calcium and phosphorus were unaltered. To conclude antioxidant vitamins E and C individually or conjointly improve bone meta-bolic status in skeletal disorders.

In bone disorders there is imbalance of osteoclastic and osteoblastic activity leading to overproduction of free radicals like superoxide [1]. Normally they act as chisels and are responsible for bone remodeling [2]. The free radicals though a cutting tool, their destructive action is reconciled with discrimination, and thus controlled pro-duction of free radicals is probably the key to make this destructive activity to complement the construction ef-fected by osteoblasts. Thus the correct blend of the two leads to the ultimate goal of remodeling [3,4,5].

These free radicals if produced in excess, in turn, are ex-pected to produce oxidative stress mainly through lipid peroxidation. A pilot study which was conducted in our institute has, precisely corroborated this expectation. Thus the osteoblastic activity is likely to be eclipsed by osteo-clastic activity in all bone disorders namely osteoporosis, renal osteodystrophy, bone malignancies and fracture [1]. The natural correction of the imbalance to restore the con-struction and to ameliorate the condition obviously cannot cope with the onslaught of oxidative stress. Thus external intervention by way of supplementation of antioxidants to beef-up whatever natural metabolic effort, seems in order without which the system may succumb to oxidative stress.

In view of this the present study was undertaken to assess the plausible role of antioxidant vitamins in bone disorders.

The patient selected were those attending the OPD at Dr. D Y Patil Medical College, Hospital and Research Centre and Malignant disease training centre, Command Hospi-tal, Pune from October 2002 to May 2005. The patients with bone disorders were in the age group between 25-70 years. Patients suffering from non-osteoid metabolic dis-orders like Diabetes Mellitus, Hyperparathyroidism, those on antioxidant supplementation or anti-resorptive therapy and smokers were excluded. Fifty age and sex matched healthy controls were selected for comparison of altered bone metabolism in skeletal disorders. The controls were not suffering from any disease and were not on any medi-cation or vitamin supplementation before and during the study period. All patients and controls gave informed consent for the study.

Fasting venous sample (10 ml whole blood) was col-lected, under aseptic conditions, from both the control and study groups around 8.00am. 6 ml of it was collected in a plain sterile bulb for the estimation of ALP; Pi, SOD and MDA

After assessment of baseline concentrations of biochemi-cal markers, the test group was subdivided into three groups A, B and C randomly but maintaining the ratio of various disorders in each group. Group A was adminis-tered only Vitamin E (Evinal 400 mg), Group B were ad-ministered only Vitamin C (Celin 500 mg). Group C were received conjoint therapy of Vitamin (E+C) i.e. for a pe-riod of 90 days. Samples were collected and analyzed at 45 and 90 days after supplementation.

The present study involved the comparison of alteration in the biochemical markers in the skeletal disorders with healthy controls (Table I). The results revealed significant increase in baseline levels of serum MDA, TrACP and ALP in bone disorders as compared with controls (p < 0.001, p < 0.05, p<0.001 respectively) No statistical dif-ference was observed in concentration of serum Ca++, Pi, SOD and erythrocyte GSH.

After administration of antioxidants individually and con-jointly to the test group for a period of 45 days, serum MDA is significantly reduced (p < 0.001). No significant change was seen in serum TrACP levels (Tables II,III and IV ). 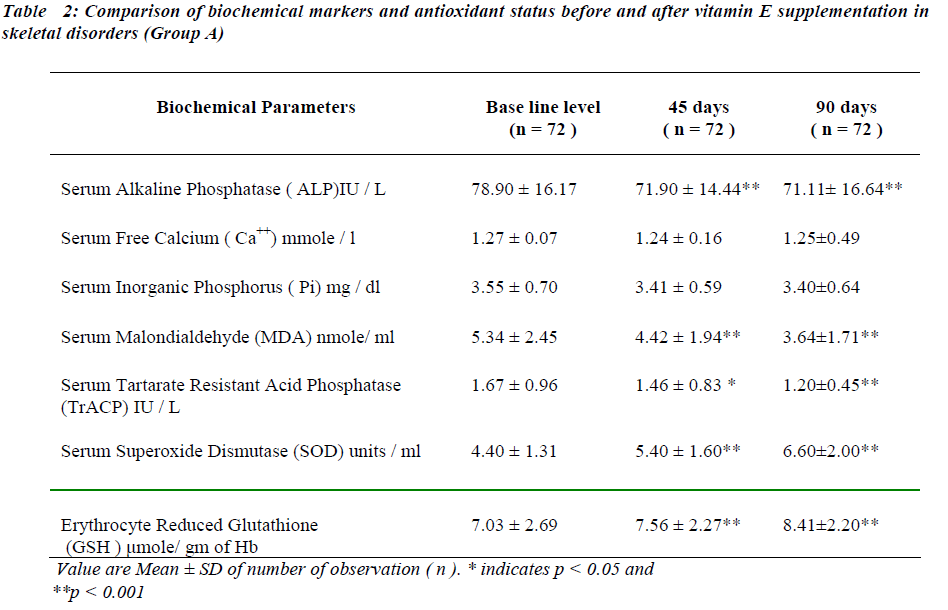 Table 2: Comparison of biochemical markers and antioxidant status before and after vitamin E supplementation in skeletal disorders (Group A) 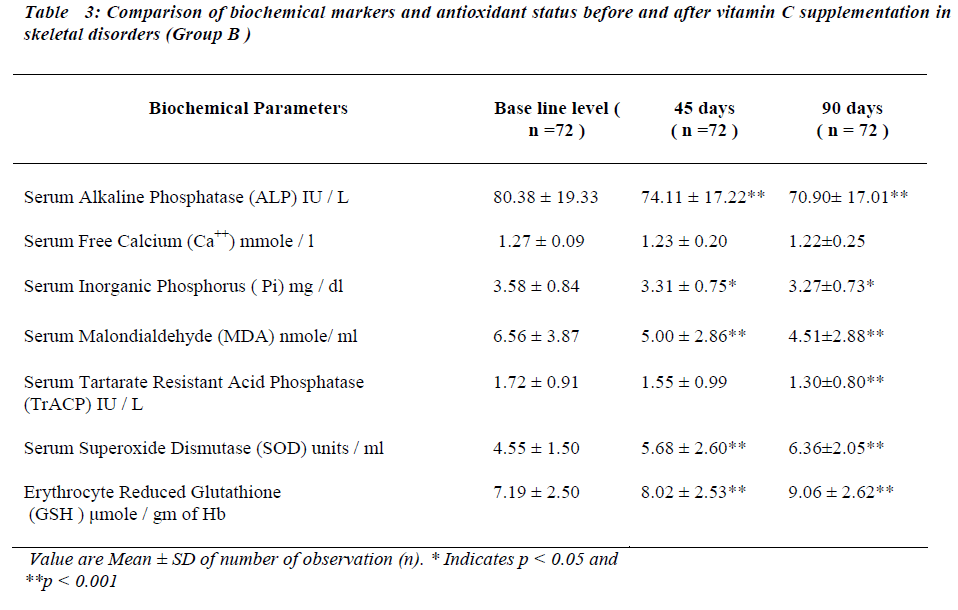 Table 3: Comparison of biochemical markers and antioxidant status before and after vitamin C supplementation in skeletal disorders (Group B ) 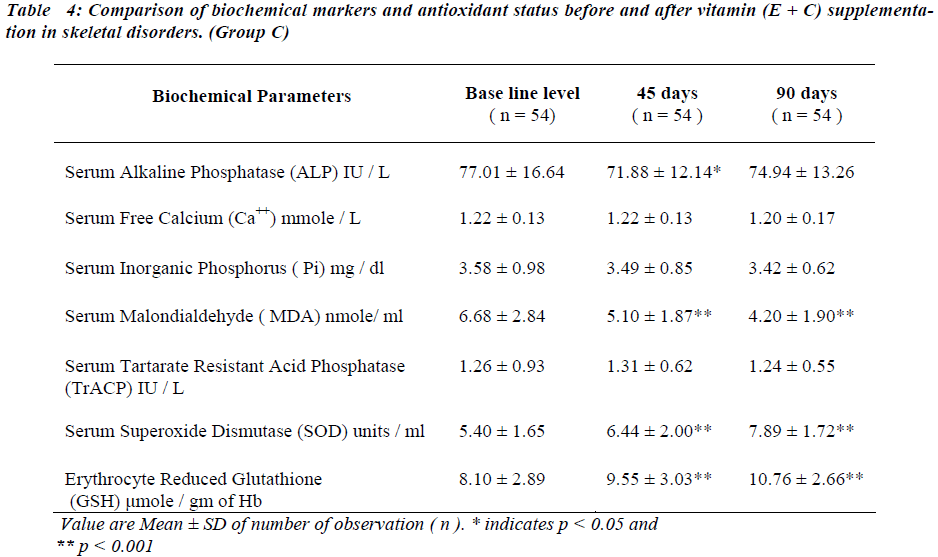 Table 4: Comparison of biochemical markers and antioxidant status before and after vitamin (E + C) supplementa-tion in skeletal disorders. (Group C) 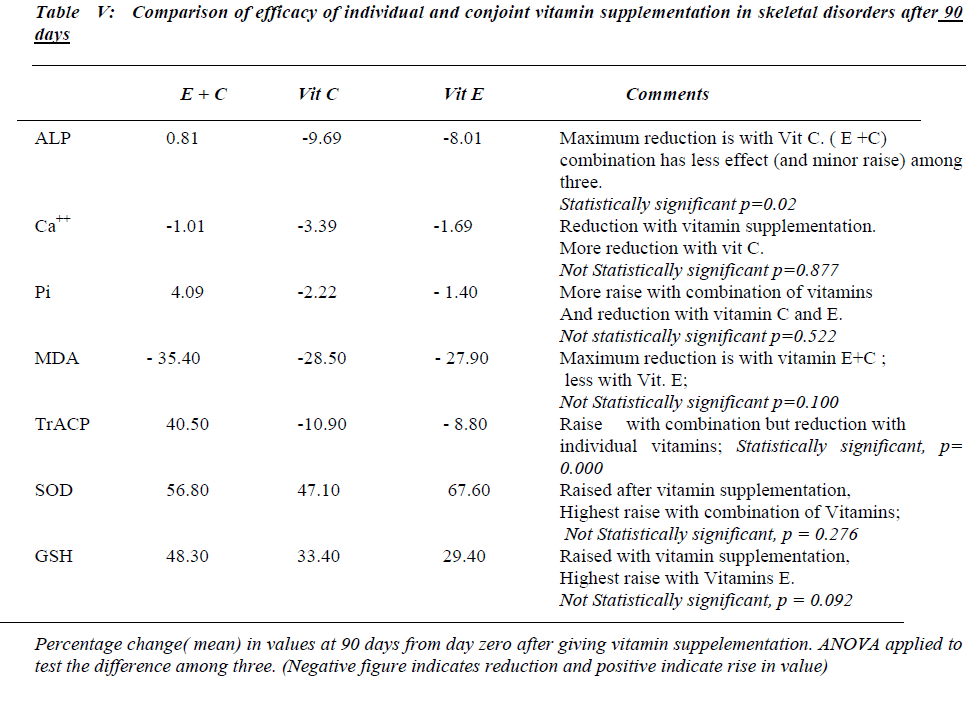 Table 5: Comparison of efficacy of individual and conjoint vitamin supplementation in skeletal disorders after 90 days

Serum SOD and erythrocyte GSH levels are significantly increased in all the groups after 45 days of antioxidant supplementation (Table II, III and IV).

Serum MDA levels continue to decrease significantly ( p<0.001) and serum TrACP levels are significantly re-duced in group A and B (Table II,III) after 90 days of antioxidant supplementation.

Serum free Ca++ and Pi remain unaltered in all groups and serum alkaline phosphatase levels continued to decrease at 90 days in group A and B. Serum SOD and erythrocyte GSH levels continue to increase significantly after 90 days in all the groups.

Referring to Table No IV number of subjects in group C differs from group A and B due to drop out of cases for subsequent follow up.

The skeletal disorders are associated with complex inter-play of osteoclastic and osteoblastic activities. The pilot study of this project revealed increased oxidative stress in skeletal disorders [1,2]. The role of antioxidants in con-trolling free radical formation and hence alleviating oxi-dative stress is well established [13,14]. The present study, hence, was an attempt to assess role of antioxi-dants, vitamin E and C in reducing oxidative stress in cer-tain skeletal disorders. Biochemical markers of bone me-tabolism used for assessing the response of the antioxi-dants included osteoblastic and osteoclastic markers [15,16]. The correlation of the markers with antioxidant status was also studied. The mean values of all the parameters in the control group were found to be in agreement with the quoted mean values obtained by other workers [6-12].

In the skeletal disorders under consideration, all bio-chemical markers are increased except serum free Ca++ and Pi. Serum SOD and erythrocyte GSH remain unal-tered as compared to their healthy counterparts. The rise in serum MDA may be due to overwhelming of osteoblas-tic activity by osteoclastic activity due to activation of osteoclasts. They use a variety of chemical agents to de-grade bone. One important component is generation of superoxide radicals [3,4,5,17]. This study reveals no change in basal values of serum SOD and erythrocyte GSH concentration in skeletal disorders, which may ex-plain rise in serum MDA levels, occurring due to in-creased lipid peroxidation as a result of increased produc-tion of superoxide by osteoclasts.

Osteoclasts being active during the process of bone re-sorption, secrete large quantities of TrACP in resorption lacunae leading to the rise in TrACP levels in skeletal disorders [18].

After antioxidant supplementation for 45 days there seems to be improvement in the lipid peroxidation index i.e. fall in serum MDA indicating inhibition of lipid per-oxidation. Vitamin E exerts it′s antioxidant property by preventing chain propagation [13,19]. Vitamin C acts as water soluble antioxidant by inhibiting initiation of lipid peroxidation13. The net result is reduction in lipid peroxi-dation resulting in reduced serum MDA levels. Serum TrACP concentration is not altered in the patients of skeletal disorders in different groups of supplementation.

In skeletal disorders the antioxidant status is improved in all the groups of vitamin supplementation, which explains the decrease in MDA levels after 45 days of supplementa-tion. Rise in serum SOD is seen in concordance with find-ing of other workers [19].

After 90 days of antioxidants supplementation, further significant fall in concentration of osteoclastic marker i.e. TrACP , lipid peroxidation index i.e. serum MDA and osteoblastic marker serum ALP along with rise in anti-oxidant status i.e. serum SOD and erythrocyte GSH is observed. Vitamin E in addition to inhibition of lipid per-oxidation enhances the bioactivity of nitric oxide which is interrelated with raised serum SOD levels [3,21,22]. This may be responsible for the decrease in the serum TrACP levels as a reflection of the inhibition of the osteoclastic activity. Vitamin C improves the antioxidant status by i) increasing erythrocyte GSH levels by being a cofator for NADP reductase. This enzyme plays a key role in the regeneration of GSH from oxidized glutathione. ii) Re-generating alpha tocopherol [23,24].

Serum free Ca++ and serum Pi remain unaltered indicating that basically in skeletal disorders an imbalance is seen in osteoclastic and osteoblastic activity rather than defect in mineralization due to calcium and phosphorus availability [25].

We acknowledge the financial assistance given by ICMR, failing which the publication of this paper would not have been possible. We also acknowledge the cooperation of the departments of Biochemistry, Medicine, Obstetrics & Gynecology and Orthopedics, Dr. D. Y. Patil Medical College; Pune and Malignant disease training centre, Command Hospital, Pune in completing this project.