Department of Foods and Nutrition, Faculty of Family and Community Sciences, The Maharaja Sayajirao University of Baroda, Vadodara-390002, Gujarat, India

Type 2 diabetes is increasing in prevalence in all populations world wide. The workplace has been internationally recognized as an appropriate setting for health promotion. The investi-gation was carried out to determine the prevalence of risk factors and trends of dyslipide-mia and hypertension in an industrial diabetic (type 2) population. A total of 54 type 2 dia-betic subjects were enrolled in the study from an industry in Vadodara. Anthropometric data (height, weight), fasting blood sugar, lipid profile values and blood pressure measure-ments were obtained from medical records. Student’s t test and ANOVA were applied. A high prevalence of risk factors was found among the diabetic subjects including pre-hypertension (37%), hypertension (53.7%), overweight (14.8%), obesity (57.4%), hypercho-lesterolemia (25.9%) and hypertriglyceridemia (39.6%). Around 87.2% of the subjects had ≥ 5 risk factors. Tracking data revealed consistently elevated blood sugar, lipid profile and blood pressure values. In conclusion, the results obtained indicate that there is a lot of scope for and benefit in initiating low cost and comprehensive diabetes prevention programs at the workplace for employees.

Non communicable diseases, especially cardiovascular disease, cancer and Type 2 diabetes mellitus, are pro-jected to account for 53% of all deaths in India [1]. The prevalence of diabetes is increasing globally. India leads the global top ten in terms of the highest number of peo-ple with diabetes, with a figure of 50.8 million for 2010 [2]. In the period from 2005-2015, deaths from diabetes in India have been projected to increase by 35% [1]. This huge disease burden puts an enormous load on the coun-try's health care infrastructure. Contrary to what is found in developed countries, where the majority of persons with diabetes are age 65 years and above, most diabetics in the South-East Asia Region belong to the young and economically productive age groups (45-64 years) [3]. A healthy workforce is essential in the context of optimal productivity and enhanced competitiveness. The work-place has been recognized internationally as an appropri-ate setting for health promotion. Health promotion in the workplace has been broadly recommended by interna-tional bodies through numerous charters and declarations [4] [5]. The workplace is an advantageous setting because of the significant proportion of time spent at work by the large majority of the population, and also because it offers an opportunity to utilize peer pressure to encourage em-ployees to make desirable alterations to their health hab-its. As highlighted in the World Health Report 2002, for non-communicable diseases, the most important risk fac-tors are high blood pressure, high concentrations of blood cholesterol, inadequate intake of fruit and vegetables, overweight/obesity, physical inactivity and tobacco use [6]. Risk factor data are especially important as predictors of future disease or injury. This type of information is vital to promoting disease prevention and control pro-grammes. Studies in many developed and developing countries worldwide have used subjects in industrial populations to track changes in coronary risk factors and to determine incidence of cardiovascular end points suc-cessfully. Examples include the Railroad Workers Pro-spective study, Chicago Firemen Study, and others in USA, Whitehall Study in UK, Norwegian and Finnish studies, many international cohorts in WHO-MONICA (MONItoring trends of CArdiovascular risk factors) study, the Chinese workplace study in Joint USAPeople’s Republic of China cardiovascular (USA-PRC) risk factor study, Japanese and Korean studies [7]. Few studies with focus on the risk profile of a diabetic industrial population and tracking the trends of dyslipidemia and hypertension in the diabetic industrial population are available in litera-ture. The present study thus made an attempt to evaluate the diabetes risk profile in an industrial productive popu-lation of Vadodara.

In the study, a total of 54 type 2 diabetics were identified from an industry of Vadodara. Information pertaining to various risk factors like heredity, lifestyle factors and medical history was obtained using a structured question-naire. Anthropometric data (height, weight), fasting blood sugar, lipid profile values and blood pressure measure-ments were obtained from medical records. Data on fast-ing blood sugar, lipid profile and blood pressure for the past four years (2005-2008) was obtained for 43 of the 54 diabetic subjects. This data was used to arrive at the trends of dyslipidemia and blood pressure over a period of four years. Results are expressed as Mean ± S.D and per-centages. The significance of the data was evaluated using ANOVA and Student’s t test. A result was declared to be statistically significant only if the p value of an analysis was less than 0.05. The statistical analysis was carried out using Microsoft® Office Excel 2003. The study was ap-proved by the local medical ethics committee.

All the subjects were in their productive years with the subjects in the age range of 39-57 years. Mean age was 50.1 ± 4.7 years. Family history for diabetes, hypertension and heart disease was found in 57.4%, 38.9% and 16.7 % of the subjects respectively. Information on the medical history showed that the complication of hypertension was common in the diabetic subjects. Around 35.2 % of the subjects confirmed having blood pressure as a complica-tion in addition to diabetes.

Data on the prevalence of risk factors is given in Table 1. Hypertension remains undetected and uncontrolled even in organized sector industries with medical facilities. Based on blood pressure values, pre-hypertension (≥120/80 mmHg - < 140/90 mmHg) and hypertension (≥ 140/90 mmHg) were prevalent in 37% and 53.7% sub-jects respectively. Based on the Asia Pacific classification 14.8% of the study population was overweight and 57.4% were obese. The habit of smoking, tobacco usage and al-cohol consumption was present in 14.8%, 22.2% and 13% of the study population respectively. Physical activity and diet, are among the leading causes of the major noncom-municable diseases. Around 70.4% of the subjects re-ported exercising > 3 hours a week. About 57.4 % of the subjects reported that their consumption of fruits was more than thrice a week and 77.8% of the subjects re-ported that their consumption of green leafy vegetables was more than thrice a week. 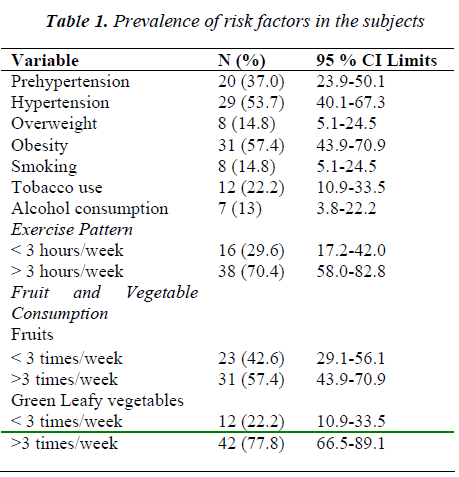 Table 1: Prevalence of risk factors in the subjects

Glycemic and Lipemic Status of the T2DM Subjects 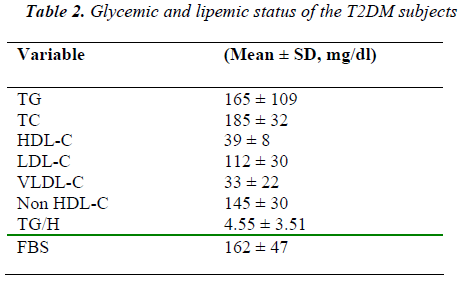 Table 2: Glycemic and lipemic status of the T2DM subjects 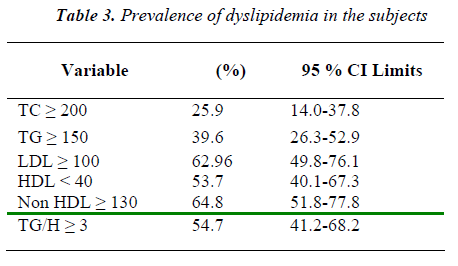 Table 3: Prevalence of dyslipidemia in the subjects

Diabetics are recommended to undergo certain tests on a routine basis to help them monitor their glycemic status and for early detection of the development of secondary complications. Table 5 gives the percentage of subjects who had undergone these tests for diabetes in the past one year. Among the various tests, majority of the diabetic subjects (85.2%) used to get their serum lipids tested fol-lowed by eye examination (for spectacles) (72.2%) and
kidney function tests (68.5%) excluding microalbuminu-ria. Less than 50% got their GHb monitored. Around 40% got ECG/Stress test done and only 20% underwent a foot examination. 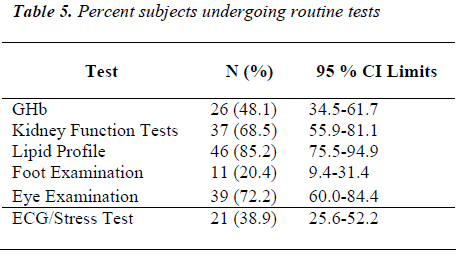 Table 6 gives the mean FBS, lipid profile, SBP, DBP and BMI values of the diabetic subjects over a period of four years. As can be seen from the table the subjects consis-tently had elevated levels of FBS, TG, LDL, Non HDL, TG/H, SBP, DBP and BMI. In 2006, 2007 and 2008 the FBS levels were significantly higher as compared to the levels in 2005. There was high prevalence of dyslipidemia among the diabetic subjects over the four year duration (Table 7). It was observed that high LDL values were present in about 44-74% of the subjects over this four year duration. More than 40% of the subjects consistently had low levels of HDL and high TG levels. Around 90-100% of the subjects had high risk AIP values thus pre-disposing them to CHD in the future. 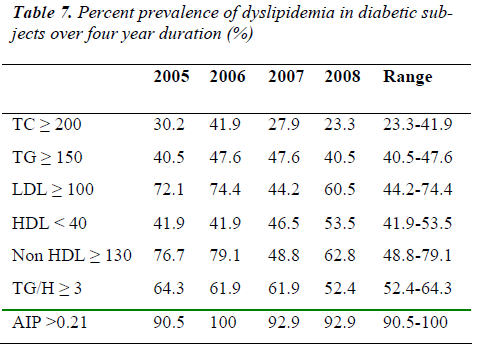 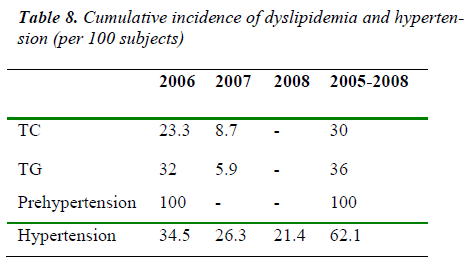 Table 8: Cumulative incidence of dyslipidemia and hyperten-sion (per 100 subjects)

There is robust evidence of increased vascular risk even in the presence of pre-hypertension (or high-normal blood pressure) [13]. This risk category has a high rate of pro-gression to hypertension. The high prevalence of pre-hypertension (37%) in the present study suggests that there is a large vulnerable population which can develop an overt adverse risk profile and CVD in the future. Health education among employees can thus improve early detection and management.

Around 57.4% and 77.8% subjects reported more than thrice a week consumption of fruits and green leafy vege-tables respectively. This observation is contrary to other studies that have observed lower fruit and vegetable in-take than recommended [11] [12]. Over reporting as a possibility cannot be ruled out. A recent paper reported lower intake of vegetables and fruits among south Asians as compared to other ethnic groups based on Interheart study data [14]. It was also emphasized that vegetarianism in Indians does not necessarily mean adequate intake of fruits and vegetables. There is a need to improve aware-ness among Indians to increase fruit and vegetable intake. An attempt to quantify fruit and vegetable intake may substantiate the claims made by the diabetic subjects. Nevertheless the positive habit needs to be encouraged for maintaining health benefits.

Early diagnosis and regular monitoring is of prime impor-tance for controlling the behavioural risk factor profile which can be modified by adopting a healthy lifestyle. Corporate health departments are frequently required to perform routine health examinations for occupational health and safety reasons. Meeting these obligations can provide opportunities to intervene in a positive way to reduce the burden of diabetes. Detection of previously unrecognized diabetes and pre-diabetes cases is possible by integrating a diabetes screening strategy into an exist-ing occupational medical programme. In this study, apart from the parameters monitored by the medical centre in the health check ups, anthropometric measurements like the waist circumference (an indicator of abdominal obe-sity), GHb, microalbuminuria (the earliest clinical evi-dence of nephropathy) and foot examination also need to be carried out. Upon identification of the at risk individu-als regular monitoring of this group also needs to be car-ried out. This target group needs continuous monitoring to prevent secondary complications associated with glucose toxicity.

Longitudinal data on blood sugar, blood pressure and lipid profile for four consecutive years revealed consis tently elevated levels of BMI, SBP, DBP, FBS and lipid profile over the four year duration. A study in employees of an industrial plant which measured height, weight, BMI and blood pressure successively for 5 years observed a significantly increasing trend in weight and BMI, a sig-nificant decline in mean SBP and unchanged DBP [7]. Adding to the existing problem was the identification of new cases of dyslipidemia over the years. The persistently high risk AIP values indicate a high risk for CVD among the industrial diabetic population. This underlines the im-portance of identifying the employees at risk by regular monitoring and by taking preventive measures. The track-ing data highlight the need for tighter glycemic control along with blood pressure control to arrest the progression of macro and micro complications in diabetes mellitus.

The high prevalence of risk factors present in the indus-trial population despite having an annual health check up calls for action on the part of the management to take ap-propriate remedial measures. Health screening of the em-ployees should be carried out on a regular basis in order to identify the at risk individuals. Nutrition health aware-ness programs should be implemented in the industries to help reduce the future prevalence and incidence of chron-ic diseases.

Our results reinforce the need for initiating low-cost workplace intervention programs to identify and manage individuals at high risk for diabetes and its complications. The ultimate goal is to develop medical strategies to max-imize good health in employees and to minimise the mor-bidity and mortality related to diabetes mellitus.

Financial assistance from the University Grants Commis-sion in the form of Junior Research Fellowship in Science (RFSMS) is duly acknowledged. This study forms a part of the doctoral dissertation work of Ms. Shonima Venugopal submitted to the M S University of Baroda, Vadodara, Gujarat, India.