This is a retrospective review of data of 70 patients who underwent endoscopic nasal septoplasty . The case records of 70 patients who underwent endoscopic septoplasty during the period from January 2009 to December 2011 at the Saudi German Hospital, Aseer Region, Kingdom of Saudi Arabia were reviewed. Patients had septal deviation and symptomatic nasal obstruction for at least 3 months, and medical management had failed. Preoperatively, nasal endoscopic findings were septum deviations (34 patients, 48.6%), spurs (30 patients, 42.9%) and septum deviations + spurs (6 patients, 8.6%). The most common presenting symptoms were nasal obstruction (55 patients, 78.6%), headache (42, 60%) and posterior nasal discharge (34, 48.6%), which improved significantly postoperatively. After the end of the follow up period of 6 months, there were no recorded immediate or late postoperative complications among all patients. Endoscopic nasal septoplasty is an effective technique that can be performed safely with a significant postoperative improvement in patient’s symptoms and minimal or no postoperative complications.

Endoscopic septoplasty is an attractive alternative to traditional septoplasty, whose primary advantage is the reduced morbidity and postoperative swelling in isolated septal deviations by limiting the dissection to the area of the deviation. In addition, endoscopic septplasty provides improved visualization, particularly in posterior septal deformities; improved surgical transition between septoplasty and sinus surgery; preservation of septum structure to provide adequate support of the nasal framework and to resist the effects of scarring. Moreover, it provides a significant clinical and an excellent teaching tool when used in conjunction with video monitors over traditional approaches [4].

Nasal endoscopy is an excellent method for the precise diagnosis of pathological abnormalities of the nasal septum. It permits the correlation between these abnormalities and the lateral nasal wall [6]. A directed approach using endoscopic septoplasty results in limited dissection and faster postoperative healing. Endoscopic septoplasty as a minimally invasive technique can limit the dissection and minimize trauma to the nasal septal flap under excel lent visualization. This is especially valuable for the patient having had previous nasal septal surgery [7,8].

In this study, we carried out a retrospective analysis of 70 patients who underwent endoscopic septoplasty from January 2009 to December 2011.

The files of 70 patients, who had undergone endoscopic septoplasty during the period January 2009 and December 2011 at the Saudi German Hospital, Aseer Region of Saudi Arabia, were studied. These files were reviewed for indications of endoscopic septoplasty, preoperative findings and postoperative complications. Included patients had septal deviation and symptomatic nasal obstruction for at least 3 months for which medical management had failed. Preoperatively, all patients were evaluated by nasal endoscopy and CT scan.

This study has been approved by the Research and Ethical Committee at the College of Medicine, King Khalid University (REC# 2012-10-04).

Under endoscopic visualization with a 0 degree endoscope, topical nasal packing with oxymetazoline was applied for decongestion; 1% lidocaine with 1:200,000 epinephrine was injected subperichondrially along the septum. A vertical incision was made caudal to the deviation and for a broadly deviated septum, a standard Killian or hemi-transfixion incision was used. For more posterior isolated deformities, the incision was placed posteriorly in the immediate vicinity of the deformity. Mucoperichondrial flap elevation was performed with a Cottle elevator under direct endoscopic visualization with a 0-degree endoscope. The flap elevated was limited as it was raised from over the most deviated portion of the nasal septum, without disturbing the anterior normal septum. Septal cartilage was incised parallel but posterior to the flap incision and caudal to the deviation. If the deviation was found to be mainly bony, the incision was made at the bony-cartilaginous junction. The contra-lateral mucoperichondrial flap elevation was then performed. Flap elevation was continued bilaterally until the complete extent of the septal deformity had been dissected. Luc's forceps was used to excise the deviated portion. Once satisfactory correction had been achieved the nose irrigated with saline to clean the blood then the flap was repositioned .Insertion of nasal splint for one week used. Patients were discharged next day of surgery to be seen in the clinic after one week, then monthly for 6 months. 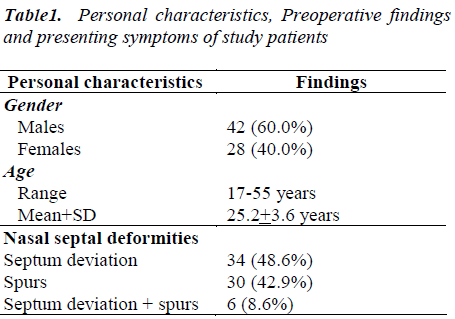 The most common presenting symptoms were nasal obstruction (55 patients, 78.6%), headache (42, 60%) and posterior nasal discharge (34, 48.6%), which improved significantly postoperatively, as shown in Table 2.

Figure 2: Patients’ symptoms before and after endoscopic septoplasty

After the end of the follow up period of 6 months, there were no recorded immediate or late postoperative complications among all patients.

This study revealed that all the included 70 patients had nasal septal deformities (i.e., septum deviation, spurs or combined). Postoperatively, there were significant improvements in all patients’ complaints. These findings may explain why the preferred surgical technique among patients was the endoscopic septaplasty, not the traditional headlight septoplasty.

Brennan et al. [9] noted that to obtain good results in septal surgery, there should be good exposure; safe elevation of flaps; and resection of the deviated part of the septum only. These could be obtained only by endoscopic septoplasty which has the advantage of a targeted approach to the specific septal problem, without the need for exposing excessive bone and cartilage, thereby improving healing time and decreasing tissue trauma.

Jain et al. [10] stated that applying the traditional technique of septoplasty improves the nasal obstruction but does not fulfill the above mentioned criteria in most instances. This is due to the difficulty to evaluate the exact pathology, especially in the posterior part of septum, and poor visualization. On the other hand, the nasal endoscopic technique allows precise preoperative identification of the septal pathology and associated lateral nasal wall abnormalities.

Lanza et al. [11] added that the rationale for developing an endoscopic technique from a traditional "headlight" approach came from the fact that during common nasal procedures, the surgeon's view is obstructed due to the narrowing caused by septal spurs or septal deviations. So, endoscopy usually enables the ENT surgeon to localize deviations, spurs and to remove them under direct vision, thus minimizing surgical trauma.

Jain et al. [10] stated that early reports of endoscopic septoplasty described several advantages associated with the technique, e.g., it makes easier for surgeons to see the tissue planes and it offers a better way to treat isolated septal spurs. Additionally, the endoscopic approach makes it possible for others to simultaneously observe the procedure on a monitor, making the approach useful in a teaching hospital.

The present study revealed that, after the end of the 6- months follow up period, there were no recorded postoperative complications among all patients. This finding is in full agreement with those of Park et al. [12], who observed that endoscopic septoplasty has much fewer complications compared with the conventional headlight septoplasty. They reported that the incidence of synechiae is significantly less in patients who underwent endoscopic septoplasty compared with those who underwent traditional septoplasty.

Similarly, the complication rates after endoscopic septoplasty were reported by Hwang et al. [7] to be 5%, and by Gupta et al. [3] to be 2.08%, while Nawaiseh and Al- Khtoum[13] reported no immediate postoperative complications in their series.

On the other hand, since the traditional approach to septoplasty involves headlight illumination, visualization through a nasal speculum, and surgical instruments that are different from those used during endoscopic procedures, these circumstances can be suboptimal when treating a narrow nose, or during approaching posterior deviation. Moreover, impaired visualization may predispose to nasal mucosal trauma, which can compromise endoscopic visualization during sinus surgery, thus leading to much higher rates of postoperative complications [10].

Paradis and Rotenberg [14] stated that the endoscopic approach for septoplasty is superior to the traditional approach for the correction of septal deviation. Moreover, Sautter and Smith[15] concluded that nasal endoscopy is an excellent tool for outpatient surveillance following septoplasty during the initial postoperative healing period and beyond. Moreover.