Retrospective assessment of 173 patients diagnosed with preeclampsia (in-cluding eclampsia): A study of 6 years

Preeclampsia is a multisystemic, multiphasic, multitheoretical and preventable disorder de-teriorating both mother and child’s health. One hundred seventy three preeclampsia (in-cluding eclampsia) cases admitted to our clinic evaluated retrospectively between 1996 and 2002, in Izmir, Turkey, which is a socioeconomically challenged country. 66.5% of patients were primiparas. Mean gestational week was 35.8 ± 4.75. According to the gestational week, 60.1% were preterm (<38th week), 37.6% term (38-40th week) and 2.3% postmature (>40th week). Mean arterial pressure levels were 126±4.9 mmHg before treatment and 98.2±11.7 mmHg after treatment. An associated edema was found in 85.5% and proteinuria in 80.4% of patients. After treatment, 60.1% of patients had recovered. Caesarean section delivery incidence was 37.6%. Early diagnosis of preeclampsia is essential for the diminu-tion of perinatal mortality, especially where dominate poor socioeconomic conditions exist.

Preeclampsia (including eclampsia) is multisystemic, multiphasic, and multitheoretical, with an unknown ori-gin, and can develop due to inadequate follow-up during pregnancy more frequently in areas with a low socioeco-nomic status [1].

Preeclampsia could be defined as a progressive hyperten-sion (>140/90 mmHg) occurring after the 20th week of gestation, most frequently in the last 6 weeks. It occurs in 14-20% of the primigravidas, in 5.7-7.3% of multigravi-das and in 25% of chronic hypertensives. It could be responsible for 15% of all maternal mortality during pregnancy [2]. The course of hypertension caused by pregnancy could vary from pure hypertension to pree-clampsia, eclampsia, and HELLP (Hypertension, Elevated Liver Enzymes, Low Platelets) Syndrome [2]. Hyperten-sion due to pregnancy is the most common cause of ma-ternal and perinatal mortality and morbidity all over the world [3,4]. This situation requires early diagnosis, an appropriate approach, and urgent treatment. These preg-nant women must be monitored carefully and intensively. When the fetus reaches a state in which s/he may not survive, delivery must be performed. In our study, the importance of early diagnosis of preeclampsia, determina-tion of risk factors, training of the patient, careful and regular antenatal evaluation, and appropriate treatment for prevention and conservation of the mother and the child are emphasized.

In this study, the demographic values, obstetrical histo-ries, laboratory findings and clinical evaluations of 173 patients hospitalized and treated for a diagnosis of pree-clampsia (including eclampsia) between September 1996 and May 2002 in Atatürk Research and Training Hospital in Izmir were evaluated retrospectively. Concerning the rearrangement of antihypertensive therapy, the use of α-methyl-dopa as the primary step of treatment is thought convenient to patients who had severe preeclampsia, with unresponsiveness to diet and rest therapy. During MgSO4 therapy, deep tendon reflexes and hourly urinary output were observed carefully. All patients’ information was obtained from protocol registers and patients’ files. Demographic obstetrical histories, laboratory findings and clinical parameters of all patients were entered in tables in Microsoft Office Excel Pocket Program format. The statistical significance of mean average and percentages of all enrolled patients was evaluated. Chi-square and variance analysis were performed using SPSS v9.0 Pocket Program. P<0.05 is defined as statisticcally significant. 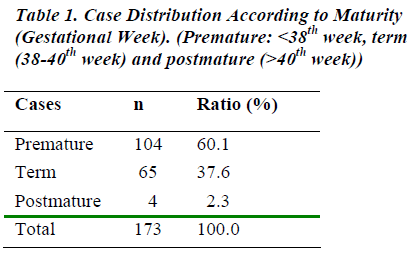 A significant relation was found between platelet count at submission and a good prognosis (p<0.05). If the number of platelets were reduced, the prognosis was worse. Simi-larly, a relationship was found between platelet count at submission and incoming patient’s status (p<0.05). As the platelet count was lower, the probability of severe pree-clampsia (including eclampsia) increased (Table 2) (χ2: 12.313, p<0.05). As the gestational week progressed, the probability of fetal distress was increased (Table 3) (χ2: 24.037, p<0.05). The incidence of primiparity was sig-nificantly greater than (66.5%, 115 patients) multigravid-ity (33.5%, 58 patients) in patients with preeclampsia (including eclampsia) (Table 4). The dwellings of 91 patients (53.9%) were rural (midtown, village, peripherals of towns and midtowns). 82 patients (46.1%) had urban localizations (town, district). Mean gestational week was 35±4.75. 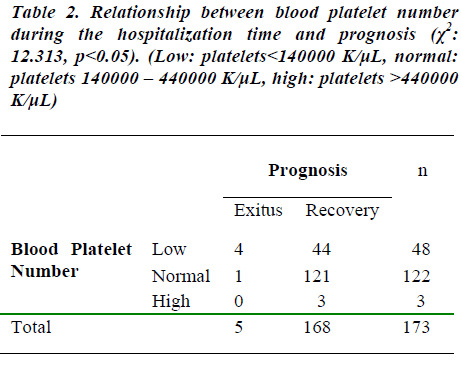 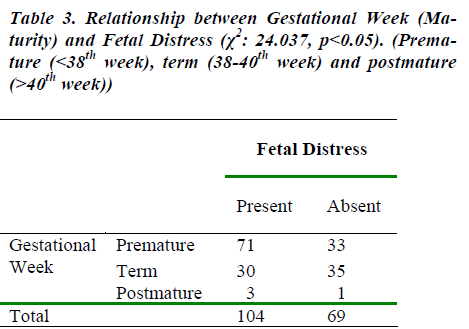 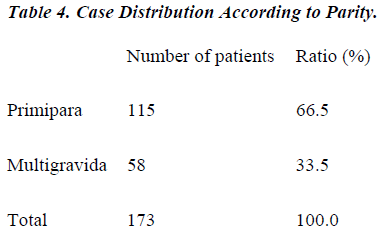 Table 4: Case Distribution According to Parity.

Hypertensive retinopathy was encountered in 11.6% (20 patients) of cases. Retinopathy was found in 20 out of 23 (86.9%) severe preeclamptic cases. Total blood protein level and albumin levels were properly related to edema. In 51.5% of cases (69 patients), baby’s weight was found under normal ranges. In 47% of patients (63 patients), birth weight was within normal range. In our study a significant relation was established between WBC and preeclampsia-eclampsia occurrence probability at hospi-tallization (p<0.05).

In addition, a relationship was established between reduc-tion of platelets and worsening of prognosis (p<0.05). The incidence of preeclampsia was found to be 3.8% in December in our trial. Preeclampsia was diminished in spring and summer (in August 2.46%). In our study, incidence in February was 11.6% (20 patients) and 5.2% in August.

The incidence of hypertension induced by pregnancy is very high [2]. If the conceptional age is advanced, the incidence of chronic hypertension and superimposed preeclampsia-eclampsia is increased. When pregnancies over the age of 35 years old and under age of 20 years old were compared, the risk significantly increases for over-35 year olds [3]. Our findings were similar regarding age of parity. In the literature, the notion that in some re-gions the illness is found much more frequently among poor women is often derided [3].

Preeclampsia (including eclampsia) generally occurred in the 3rd trimester, especially between 30th and 36th week of gestation. In the literature, it is described that accompany-ing renal and hypertensive diseases are usually seen with preeclampsia, which worsen the prognosis [5,6,7]. This finding is notified as arteriolar vasospasm in 80% of cases [2,8]. It is also described that retinal edema is rare and hemorrhage and exudation are less than 2%. According to the literature, arteriolar vasoconstriction is properly related to the severity of the syndrome [2,3,9]. Our find-ings support this claim. With decreased total blood pro-tein and albumin levels, the incidence and severity of edema increases [6]. Proteinuria is the major sign of pree-clampsia as described in literature [5,6]. In preeclamptic patients with proteinuria, the risk of premature delivery and perinatal mortality is significantly increased [7,10]. Waugh et al, described that there is a significant relation between mean arterial pressure and neonatal weight [11]. With increased levels of hypertension, the probability of low birth weight increases. However, we could not find any statistically supportive findings about this fact. Nev-ertheless, in the literature, perinatal mortality and mean blood pressure were found to be closely related [1]. As the mean blood pressure increases, the perinatal mortality increases.

Despite various therapies (α-methyl-dopa, MgSO4 e.g.), the patients in whom blood pressure couldn’t be con-trolled, especially those with a blood pressure greater than 110 mmHg, with liver enzymes levels elevated, with thrombocytopenia and pulmonary edema beginning to develop, proceeding to HELLP Syndrome, or deepening of fetal hypoxia occurring, must immediately be delivered. In mild cases, MgSO4 therapy was not the first choice of therapy. In eclampsia and severe preeclampsia, MgSO4 was the first and only choice of therapy. There was a significant correlation between our clinic’s protocol and that of the literature. Superiorities of MgSO4 therapy are described in the studies of Sibai et al. [4], Monico et al. [9] and Graham [12].

In addition, the literature supports our finding by describ-ing preeclampsia as being a high inflammatory response of the mother against pregnancy [13]. The literature also describes that thrombocytopenia and increasing of throm-bocyte volume are the most valuable criteria for designa-tion of severity of preeclampsia [14,15]. In their study of 1869388 patients in Norway between 1967 and 1988, Per Magnus & Anne Eskild (2001), reported that they en-countered preeclampsia in 2.7% (51801 patients) [16].

Similar studies performed in other countries describe that preeclampsia has a systematically seasonal variation [16]. They indicate that preeclampsia can occur frequently in winter and rarely in summer. Similarly, in the literature, incidence of preeclampsia in autumn and in winter was 50.9% and in spring and in summer 9.1%. Accordingly, we get the hypothesis that the probability of preeclampsia is higher in a cold climate, increasing the vasoconstric-tion, which plays an important role in the pathogenesis of preeclampsia as it does in myocardial ischaemia [8].

In conclusion, platelet number and gestational week at hospital admission time are a predictor of the prognosis of the patient.