Aim: The aim of this study was to present the effectiveness of continuous intraluminal aspiration for treating postoperative intestinal fistulas.

Methods: Continuous intraluminal aspiration was conducted on nine patients who underwent surgery for upper or lower Gastrointestinal (GI) tract diseases in our General Surgery clinic from January 2014 to March 2016 and developed an intestinal fistula after the surgery. The clinical and demographic results of the patients were analyzed retrospectively. A double-lumen system consisting of a nasogastric catheter and an implanted endoscopic retrograde cholangiopancreatography cannula was used for aspiration.

Conclusions: Although treatment duration is longer when using continuous intraluminal double-lumen catheter aspiration, it is an effective method to treat postoperative intestinal fistulas with a low mortality rate and cost.

Fistulas and anastomotic leakage are complications of surgical attempts to treat benign and malignant diseases of the Gastrointestinal (GI) tract. Various treatments have been used, but surgery is the first-line treatment [1-4]. Today, surgery is still used, but less frequently due to developments in endoscopic technology and assistant’s tools. The success of treatments methods that are less invasive and easier than surgery has increased, and reduced complications from these methods have decreased the requirement for surgery remarkably in recent years [5-12]. In this study, we share our experience of patients who received continuous intraluminal aspiration to treat a fistula and anastomotic leakage.

The demographic, clinical, and endoscopic data of nine patients who underwent surgery for upper or lower GI tract diseases at the General Surgery clinic of Kahramanmaraş Sütçü İmam University Faculty of Medicine from January 2014 to March 2016, and who developed an intestinal fistula or anastomotic leakage after the surgery and received continuous intraluminal aspiration treatment, were analyzed retrospectively. Food consumption was restricted in all patients before the treatment. A double-lumen system using a thinner (5F) lumen Endoscopic Retrograde Cholangiopancreatography (ERCP) cannula, which enabled continuous aspiration and prevented mucosa from sticking during aspiration, was placed inside a soft 18F nasogastric catheter. All procedures were conducted using a flexible gastroscope or colonoscope under sedation. The distal end of the system was placed within 1 cm of where the fistula or leakage developed. Placing the catheter endoscopically at the treatment site was considered a technical success. A low pressure negative vacuum was applied to provide continuous aspiration for 24 h following placement of the double lumen catheter. The openness of the ERCP cannula used to form the air channel was checked three or four times daily.

Any obstructions were removed by injecting 5-10 mL of normal saline, which was aspirated from the proximal ends of the catheters. Patients did not eat during these procedures. Patients who had a feeding jejunostomy distal to an upper GI fistula were fed enterally and parenterally, whereas total parenteral support treatment was used for patients who did not have a jejunostomy. Patients with a lower GI fistula had a deflector ileostomy and ate normally during the aspiration process. All patients were given wide-spectrum prophylactic antibiotics.

Abscess fluid collected secondary to a fistula, leakage or surgery-causing complications was drained by drains placed using ultrasonography. Ultrasonography or computed tomography was used to determine when no fluid was in the drains, and oral opaque leakage control was done fluoroscopically, the aspiration process was terminated, the drains were removed, and oral intake was started. Oral intake was not started until the upper GI fistulas had completely filled. Healing of the fistula was considered as clinical success (recovery). If the complication continued, surgery was attempted. Any patient who died secondary to a complication was considered a clinical failure.

Table 1. Clinical and demographic characteristics of the patients. 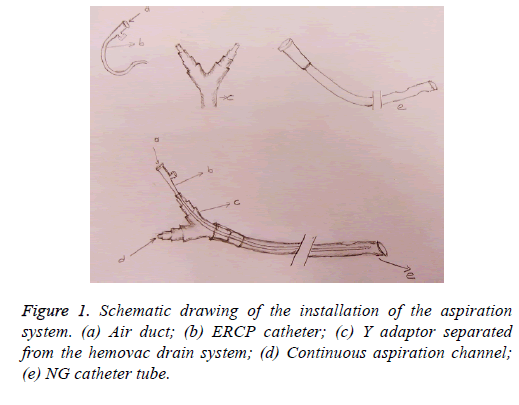 On the date of 21st September 2016, approval number 228 was obtained from the Ethics Committee of our faculty for this study.

Nine patients suffered complications; three had esophagojejunostomy leakage after gastric cancer surgery, one developed esophagomediastinal and tracheomediastinal fistulas after an Ivor Lewis esophagectomy was performed for esophageal cancer, one developed leakage in the pyloroplasty line after a duodenotomy due to a bleeding peptic ulcer, one duodenal fistula emerging from the iatrogenic duodenal injury after laparoscopic cholecystectomy, and three had a colo-anal anastomotic leakage after low anterior resection due to rectal cancer in the lower GI tract. Four patients underwent Chemoradiotherapy (CRT). The first session was technically successful in all patients. All patients developed obstructions that were eliminated easily with normal saline injected from the catheter. Mean hospitalization duration was 41.77 ± 15.74 d. Mean drainage volume from upper GI tract fistulas before aspiration was 2,700 mL/d, which was decreased to 650 mL/d. Abscess pouch volume and necrotic material decreased in patients with rectal cancer. Mean drainage volume from fistulas in lower GI leaks before aspiration was 300 mL/d, which dropped to 50 mL/d (Table 2).

Clinically successful results were achieved in eight of the nine patients (89%) who underwent continuous negative intraluminal aspiration, and all (100%) were fully recovered at discharge. 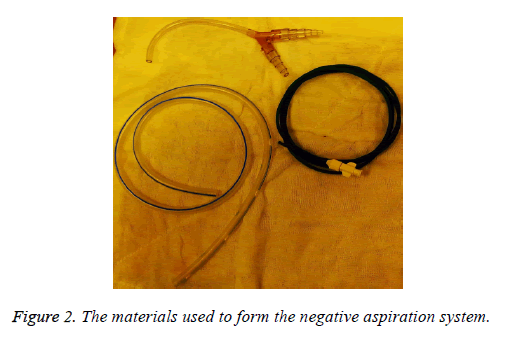 Figure 2: The materials used to form the negative aspiration system. 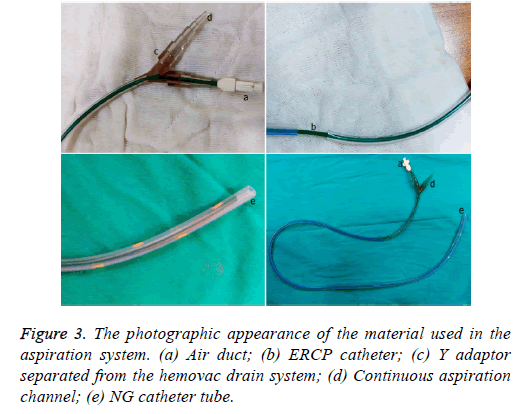 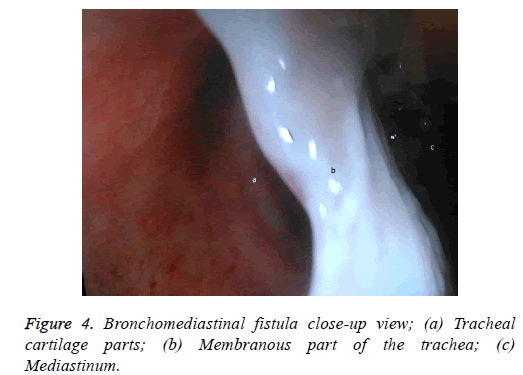 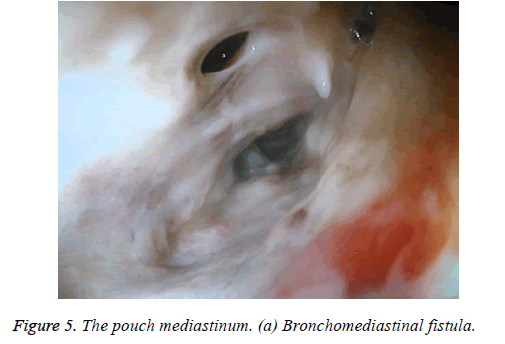 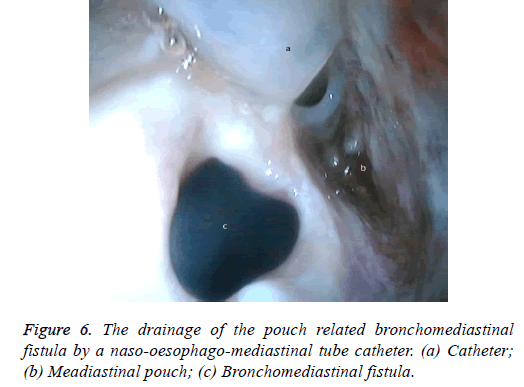 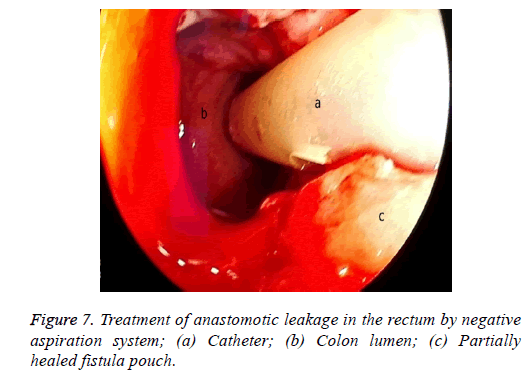 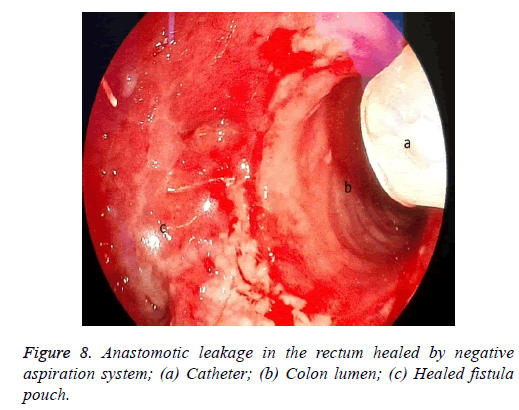 Invasive methods are commonly used to treat fistulas and complications due to anastomotic leakage that develop after surgery for many benign and malignant GI diseases, which previously had only one treatment [5-12]. Because of the high morbidity and mortality of patients with a fistula and/or anastomotic leakage, the search for treatments has continued due to the lack of a demonstrably effective method.

Providing total parenteral nutritional support and restricting oral intake decreases morbidity and mortality in these patients [13-15]. Other studies have reported that antibiotic therapy and medical treatments that decrease GI tract secretions, such as somatostatin, are useful to treat these same patient groups [16,17].

Kale et al. studied five patients with duodenal fistulas who underwent continuous negative intraluminal aspiration for the first time, with the results being published in 1998 [21].

Stents or clips, band ligation, and injection of tissue adhesive agents have become popular methods to treat fistulas and an anastomotic leakage [5-12]. Several methods of nonsurgical fistula closure have been attempted but none has been proved in a randomized, prospective trial.

For example, the injection of fibrin glue, other injectable treatments include histoacryl glue into the fistula tract, porcine small intestinal submucosa has been used less commonly, in small bowel fistulas [25,26].

However, complications, such as moderate, medium, or serious chest pain, bleeding, stent folding, pneumomediastinum, esophago-tracheal fistula, obstruction of the stent with food, and tracheal pressure have been reported after placing stents in the GI system [27-29].

Inserting a stent can also lead to serious morbidity and mortality due to stent migration and perforation [30]. The high cost is another disadvantage, and none of these issues were present when performing continuous negative aspiration on our patients.

Our application is simple and effective and can be performed with easily accessible materials at a low cost in every healthcare organization in which endoscopic operations are performed. Similar to a stent, our continuous negative aspiration method is limited to endoscopically accessible areas in the GI tract. In addition, oral intake in patients who have undergone conducted continuous negative aspiration cannot start until 13 d after the procedure, whereas patients who receive a stent can eat orally 1-2 d later [31]. Similarly, our method does not have the same wide indication area as that of the stent, such as for an intestinal obstruction or stenosis.

Stents or surgery is preferred for esophagobronchial and esophagomediastinal fistulas. Preoperative requirements may take up to 6 months to fulfil, and it is not unreasonable to wait that long to progress to definitive surgical intervention [32]. Recommendations vary but usually specify waiting 3 to 6 months or longer after the original operation [31-33].

The success of our negative aspiration system, particularly for lateral fistulas, is due to continuous aspiration inside the intestinal lumen decreasing pressure and increasing the flow of liquid contents outside the lumen. We noticed this affect due to the dramatic decrease in drainage volume when we started intraluminal aspiration on our patients with an upper GI tract fistula. The method decreases leakage of GI contents outside the lumen, and the decreased size of the abscess pouch in the area and recovery of the fistula shortens hospitalization duration.

The situation is similar in patients with a rectal leakage, although these patients have a deflector ileostomy so the GI contents do not reach the anastomotic leakage site. However, an abscess emerging around the anastomosis can lead to serious septic complications. In these patients, the doublelumen catheter placed in a transanal position, along with the negative pressure applied, drains the perianastomotic abscess, which helps the abscess pouch shrink and the fistula defect to recover.

In summary, although only nine patients were evaluated in this study, the continuous intraluminal aspiration method was very effective, cost efficient, reliable, minimally invasive, and successful for treating fistulas and anastomotic leakage in a short period and with a low complication rate.

Reoperations for intestinal fistulas and anastomotic leakage result in high morbidity and mortality. Thus, non-surgical methods with lower mortality and morbidity rates are preferred for a reoperation. Although this was a low volume retrospective study, the treatment success rate is notable. This aspiration method using a continuous intraluminal doublelumen catheter is relatively longer in duration but is costeffective and results in a low mortality rate in appropriate cases. More extensive studies should be performed with more patients to determine the effectiveness of this method and render it widely applicable.

The authors have no financial conflicts of interest.