Lipomas, benign tumor of the fat, are the most common soft tissue tumors of the adulthood but the lipoma of retropharyngeal space is very rare. Usually they do not give rise to symptoms and rarely obstruct airway until they are of large size. Such fatty tumors also carry rare possibility of being liposarcoma, which further warrants their surgical excision. We are reporting an interesting case of retropharyngeal lipoma that remained asymptomatic for long time, and then patient gradually developed the obstructive sleep apnea [1] and respiratory distress.

A 48 year old man presented with 4-5 years history of abnormal sensation in the throat and progressive dysphagia, more with solid foods. Patient also noticed a swelling in left retromandibular region and in the posterior pharyngeal wall for last 18 months, which was gradually increasing in size. Patient also stated that from last 18 months he had more snoring, disturbed sleep and daytime sleepiness, for last 8-9 months he noticed a change in his voice. Difficulty in breathing started 2-3 months back, which used to get aggravated in supine position and during sleep. On physical and endoscopic examination a soft to firm swelling in left retromandibular region, which was not fixed to undersurface, and a bulge on the posterior pharyngeal wall that reach up to piriform fossa was observed. The X-Ray neck with barium swallow showed a large soft tissue mass pushing the larynx and trachea forward. The Magnetic Resonance Imaging revealed a sharply circumscribed lesion measuring 9.5 × 6.7 × 3.8 cm mass that was hyper intense on T1W and T2W images (Figure 1) and hypo intense on fat suppressed mode suggestive of fat (Figure 2). The mass was well encapsulated and extended from superior border of C1 to C6 cervical vertebra and both common carotid artery and internal jugular vein were displaced posterolateraly. However, there was no alteration of flow signal. Although a Polysomnographic or full sleep study was not done but on “Mini Sleep Study” with observation during sleep with Oximeter monitoring of Oxygen saturation and ECG for 4 hours showed that he had Apnea-hypopnea index 6 of 18. The FNAC diagnosis was lipoma. 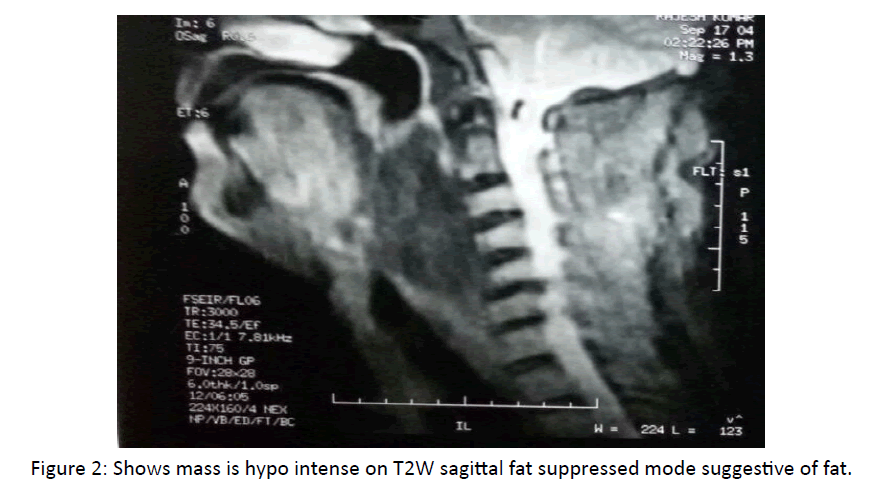 In his second follow up he had no problem of snoring, disturbed sleep and daytime somnolence. On Mini Sleep Study his Apnea index was 4 and very little fluctuation in oxygen saturation level.

The lipoma is relatively common benign tumor in head and neck region and it only produce few symptoms. On the other hand retropharyngeal lipoma are extremely rare and there are only few reports available in literatures, and retropharyngeal lipoma as a cause of obstructive sleep apnea syndrome is even more rare [2], The tumor described here was in retropharyngeal space, this space is bounded by pharynx anteriorly, the prevertebral fascia posteriorly, base of skull superiorly and is continuous with mediastinum inferiorly. It remains filled with loose areolar tissue and is divided by midline raphe that extends from the fascia covering the constrictor muscle to the prevertebral fascia. Obstructive sleep apnea is a sleep disorder typified by a functional narrowing of the pharynx. Most commonly this is caused by bulky or retropostioned soft tissue of the palate, base of tongue, or retropharynx. Patients with sleep apnea frequently have multiple anatomic abnormalities and, neuromuscular dysfunction causing airway collapse. Less common causes of obstructive sleep apnea include tumors of pharynx and larynx [3]. In present case complete polysomnograghy was not done, he had the typical sign and symptoms of obstructive sleep apnea; loud snoring at night, apneic episode while sleeping and day time somnolence [4]. “Mini sleep study” test confirmed the obstructive sleep apnea syndrome [5].

Fine needle aspiration cytology of lipoma yields fragments of benign adipocytes that cannot be distinguished cytologically from normal fat. The MRI (in fat suppression mode) is very much diagnostic of lipoma and useful in preoperative assessment of the size of tumor and adherences to the adjacent structures.

The lipoma usually preset as slow growing mass, and deeply situated lipoma may remain undiagnosed for years because patient usually become habituated to their symptoms. Our patient had symptomatic history of 5 years before he was diagnosed as retropharyngeal lipoma. It is likely that the patient developed the lipoma many years before his symptomatic presentation. The liposuction and surgical excision of the mass are the two alternatives [6] of the treatment. In this case we chosen the surgical excision because in liposuction there are always chances to redevelop the lipoma, secondly we wanted to rule out the possibility of liposarcoma. Liposuction, although is less invasive than open surgical excision but our patient also opted for surgical excision on after explaining the pros and cons of both the procedures. The surgical excision of lipoma in this patient led to resolution of all the symptoms including obstructive sleep apnea syndrome and dysphagia.

Large retropharyngeal lipoma can be challenging and difficult to resect because of their location and proximity to the vital structures. Preoperative assessment of the tumor size and its adhesion to adjacent structure like carotid artery, jugular vein and muscles are must for hassle free complete excision.