Objective: To discuss the effect of ultraviolet B (UVB) on inducing the senescence of human skin fibroblasts and investigate its mechanism.

Methods: The tissue explants method was used to isolate and culture the primary human skin fibroblasts, and after the observation of changes in cell morphology and β-galactosidase (β-gal) cell senescence staining via irradiation with different doses of UVB, the single irradiation dose of UVB in the induction of senescence of skin fibroblasts in subsequent experiment was determined. The cells and supernatant were collected at different time points (12, 24, 48 and 72 h) after irradiation with established doses of UVB. Western blotting was performed to detect the expression of marker P16 protein in induced senescent cells, and the expression of type I collagen, type III collagen, matrix metalloproteinase (MMP)-1 and MMP-3 of senescent cells was detected via ELISA.

At present, senescence is an irreversible biological phenomenon [1]. Skin senescence is part of the body senescence, which is manifested as skin relaxation, thinning, wrinkle formation and gradual increase and deepening in wrinkle [2], and it is the most intuitive external manifestation of the body senescence. Studies [3] have shown that the skin senescence is related to the decrease in skin fibroblast proliferation and dermal collagen content. At present, the specific role and mechanism of skin fibroblasts in the skin senescence process remain unclear [4]. In this study, the senescence of skin fibroblasts was induced via ultraviolet B (UVB), the expression of senescence-related protein P16 and changes in synthesis and secretion of type I and III collagen and matrix metalloproteinase (MMP) 1 and MMP3 were observed, and its possible mechanism was investigated.

Separation and culture of human skin fibroblasts [5]: The excess foreskin tissues resected via urinary surgery (with informed consent of patients' guardians) were collected from the Third People's Hospital affiliated to School of Medicine, Shanghai Jiaotong University, and the subcutaneous fat and blood vessels were removed, and the foreskin fibroblasts were obtained using the tissue explants method. The tissues were cultured in the high-glucose DMED with 10% fetal bovine serum, and when the cells grew until 90%, they were digested via 0.25% trypsin-0.02% EDTA, followed by passage culture. The third-generation cells were taken for experiments.

Skin fibroblast senescence induced by UVB: The thirdgeneration human skin fibroblasts were irradiated with UVB (312 nm) using the UV cross-linker; the irradiation dose was 0 (blank control), 10, 20, 30, 40, 50, 60, 70 and 80 mJ/cm2; after 48 h, they were re-inoculated in the 6-well plate (700 cells/ cm2); after 24 h, the β-gal cell senescence staining kit was used to detect the cell senescence; according to the cell morphological changes and β-gal staining results, the single irradiation dose of UVB was determined.

Cell grouping and induction of senescence:

1) Irradiation group: The third generation of human skin fibroblasts were taken and inoculated into the culture dish with a 10 cm diameter (1 × 106/dish); after the cell fusion of 80%, they were irradiated with the single dose of UVB determined in the preliminary experiment. 2) Control group: It received no UVB irradiation, and other treatment was the same as that in irradiation group.

Western blotting: The cells were collected since the UVB irradiation (at 0 h) and at 12, 24, 48 and 72 h after irradiation. The cells were split via 2 × SDS protein lysate and the protein was collected. The cells were soaked in boiling water for 10 min, followed by 30% SDS PAGE (1:1); then the cells were sealed via 5% skim milk for 2 h, incubated using rabbit antihuman P16 (1:1000) at 4°C overnight, washed for three times with TBS (10 min per time), and then the mouse anti-rabbit secondary antibody (1:2000) was added for incubation at room temperature for 2 h, followed by color development via ECL kit, image scanning via image analyzer, and semi-quantitative analysis with GAPDH as the internal control.

SPSS 10.0 software was used for statistical analysis of experimental data. Metrological data were presented as x̅ ± s, and the one-way analysis of variance and paired t test were adopted. P<0.05 suggested that the difference was statistically significant.

Morphologic observation of skin fibroblasts after in vitro separation and culture: The cells began to climb out from the edge of tissues since the 4th day of tissue explants culture, and the cells were fused at 10-14 d. Porous stone cells could be found in the middle of the long spindle cells, the fused cells received the passage at 1:3, and the cell growth accelerated. On the second day, cells could be fused after passage; since the second generation of cells, they showed the typical long spindle shape, and the porous stone cells disappeared. 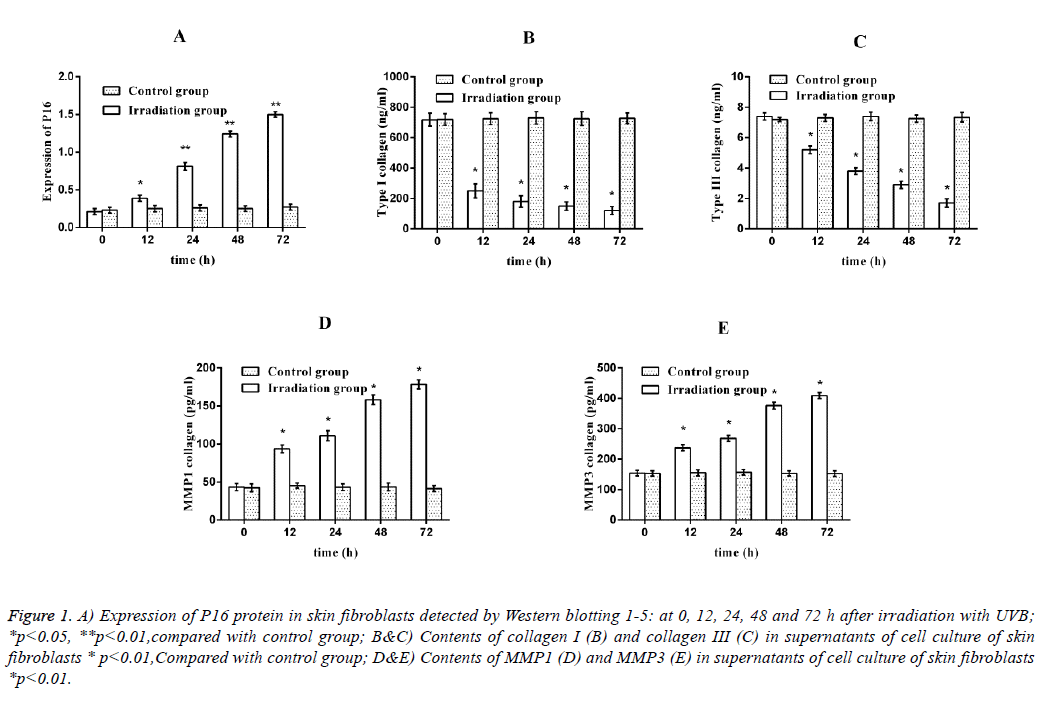 Fibroblasts are the main cell components in the dermis of skin, and the collagen fibers, elastic fibers and matrix components secreted by them form the main body of dermis together with fibroblasts [6]. With the increase of age, the skin gradually became senescent. The senescent dermal layer is reflected, at the cellular level, in the fibroblast senescence and decline in its function [7]. Studies have confirmed that the external stimuli can accelerate the skin senescence, such as ultraviolet light, chemical contamination and smoke pollution, among which UV-induced skin senescence has been studied for many years and is easy to be controlled [8]. Therefore, this experiment intended to treat skin fibroblasts with UV to establish the UVinduced skin fibroblast senescence model.

Studies have shown that UV is mainly composed of UVB (wavelength of 280-320 nm) and ultraviolet (UVA) (wavelength of 320-400 nm). Studies [9] have also revealed that UVB radiation can penetrate the skin for 160-180 μm, and can penetrate the skin layer of human skin and reach the dermis layer, causing skin sunburn and pigmentation, also increasing skin senescence [10]. With the increase in environmental pollution, more and more UVB exposes to the earth's surface gradually, and its damage to the human body is also more serious. Therefore, this study selected UVB to establish the skin fibroblast senescence model to study its damage to skin fibroblasts. The results showed that after 40 mJ/cm2 UVB was irradiated to human skin fibroblasts for 72 h, the cell growth was stagnated; the cell morphology showed typical senescence (large and flat cells, transparent cytoplasm, and more nuclear particles); β-gel senescence cell staining showed the strongly positive, and the senescent marker protein P16 was highly expressed, suggesting that UVB successfully induces the human skin fibroblasts senescence.

In UVB induction, the synthesis and secretion of type I and III collagen via skin fibroblasts are lost, accompanied by increased collagen degradation. MMP is a family of zincdependent enzymes encoded by MMP gene, which can specifically degrade the proteins in connective tissues [15]. MMP1, also known as collagenase, can degrade I, III, VII and X collagen; MMP3, also known as stromelysin-1 or aggrecanase, which can degrade type III, IV, V and X collagen, fibronectin and denatured collagen [16]. In this study, it was found that the expression of MMP1 and MMP3 in skin fibroblasts was significantly increased at 12 h after the induction of senescence, suggesting that the UVB irradiation of skin fibroblasts not only reduces the secretion of type I and III collagen, but also degrades the collagen secreted outside the cells via increasing the expression of MMP.