An overview of major causes of cerebral infarction

The retrospective analysis of the major causes of silent cerebral infarction suggests that it has strong association with major risk factors such as carotid artery disease, metabolic syndromes, hypertension, homocysteinemia, chronic kidney diseases etc. (Figure 1) [5]. In hypertensive patient's blood pressure usually rises when the patient's arteries have begun to harden, and the two are usually accompanied by each other. At the same time, in patients suffering from diabetes, patient's blood lipids will increase, and these symptoms may also make the patient's artery atherosclerotic burden, thus speeding up the hardening speed. Therefore, the arteries of a patient with a diameter of more than 500 microns will harden rapidly, and the lumen of an artery in the brain of patients will gradually shrink and become narrower, so the patient will suffer from the cerebral thrombosis which can affect the health of patient's brain [6,7]. 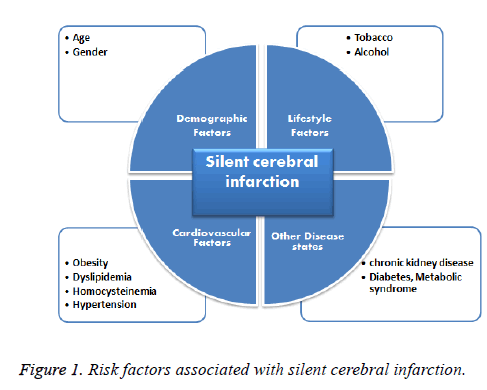 The recent reports on pathological analysis of silent cerebral infarction, mentions that the possibility of SBI’s in the patient's internal carotid artery accounts for 80%, while the possibility of such a disease in the patient's vertebrobasilar artery generally accounts for a lesser percentage of about twenty. Therefore, the most likely place of resting cerebral infarction in the human body is the internal carotid artery followed by the cerebral artery, and the last one is the vertebral basilar artery. In the blood vessels of these lesions, we can observe some of the blood clots that occur after the onset of atherosclerosis, and they will hinder the entire local blood supply and cause nerve cell necrosis [8-10].

The balanced test was carried out to the research objects and the above data was analysed. The results from this study are as follows. The study analysed various factors such as the average age of the cases, gender of the cases as well as the hemodynamic parameters of the cerebral vessels in the cases. The results showed that the minimum, maximum, mean blood flow velocity and blood flow of the patient were slowed down whereas the patient's cerebral vascular resistance and pressure showed a phenomenon of improvement. There was a significant decrease in the total score of cerebrovascular function. The following Figure 2 shows the patient's minimum, maximum, mean blood flow velocity, the patient's cerebral vascular resistance, pressure, the patient's total score of cerebrovascular function and so on. 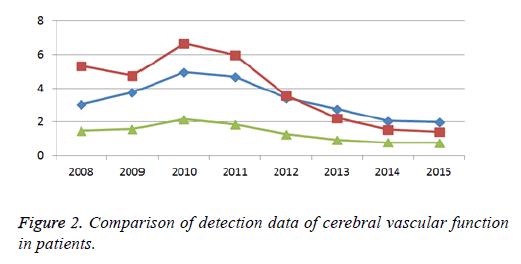 These findings of the study hint that the detection of cerebrovascular function in patients has very important clinical significances for the prevention and treatment of silent cerebral infarction.

This work was supports by key medical talents fund of People’s Hospital of Quzhou.