Background: The prevalence of ESRD has risen rapidly worldwide due to congenital anomalies of the kidney and urinary tract (CAKUT). In the developing countries, these abnormalities could be delay in diagnosed, and treatment. The aim of this study was to analyzed renal survival patients of CAKUT and outcomes in chronic kidney disease. Methods: In this cohort study, 53 CAKUT patients were followed up. Clinical end points were censored on 31st September, 2017. ESRD or death was assigned as a dependent variable. Renal survival was measured from the date of patient chronological ages to the date of initiation of renal dialysis or to the date of ?rst eGFR <15 ml/min per 1.73 m2 (stage 5) or death secondary to renal causes. Results: The frequency of renal diagnosis based on CAKUT abnormalities are 38 in obstructive type and 15 in non obstructive type. Mean age for obstructive type was 8.9 ± 4.42 years and for non obstructive type 9.92 ± 2.42 years. Mean basal glomerular filtration rate was 52.8 ml/min/1.73 m2 for obstructive type and 55.4 ml/min/1.73 m2 for non obstructive type. Median follow-up of all CAKUT patients was 15 years (14.54-15.46 years). The median renal survival for obstructive type was 14.50 (8.09-20.90) years and for non-obstructive type 15.00 (6.92-23.07). There was no significant difference them. Conclusion: The understanding management of CAKUT makes it possible for children with CAKUT to have fewer complications, have longer renal survival, and survive even with ESRD through renal replacement therapy.

The prevalence of ESRD has risen rapidly in worldwide due to congenital anomalies of the kidney and urinary tract (CAKUT). These anomalies are the spectrum of malformations that occur in the kidney, ureter, bladder and urethra [1] result from defective development of the kidney and the urinary tract. Most CAKUT cases in developing countries lack of pre natal screening, delay treatment and progression to end stage renal disease (ESRD), it accounts for 34-59% of pediatric population and has important impact on renal survival. Renal survival in pediatric population markedly varies depending on the cause of renal diseases, such as CAKUT are more common in infant, toddler and school-age children [2].

Depending on their types and severity, children with CAKUT often have varying degrees of a reduced number of nephrons at birth. Renal scarring can further increase the risk of decline glomerular filtration rate (GFR) in children. Once the loss of nephrons and functional renal mass reaches a certain point, the remaining nephrons begin irreversible sclerosis process that lead to ESRD. Apparently, tubuloglomerular feedback mechanisms are disturbed in patient with ESRD [3]. Hypertension and proteinuria may develop in children with CAKUT and further aggravate renal function unless they are treated. We hypothesized that many patients with CAKUT manifest ESRD and determined rates progression between obstructive and non-obstructive type of CAKUT.

The records of 53 children patients diagnosed with CAKUT were included in the analysis of this retrospective cohort study. Inclusion criteria were children who were admitted to the H. Adam Malik Hospital from 2007 to 2017 with CKD (stages 2-4) and had at least 1 year of follow-up.

Renal survival time, defined as the time from onset of the cause to confirmed ESRD, was calculated from the index date to the first date of confirmed ESRD diagnosis. Renal survival time indicated the duration of an enrolled patient with ESRD who had preserved renal function independent of renal replacement therapy. Because of CAKUT is lifelong disease so chronologic age was used as the index date instead. To ensure the validity of the index date, the patients were followed-up for at least 1 year and those with incomplete observation were not included in this study. ESRD was defined as eGFR <15 ml/min per 1.73 m2 or requiring renal replacement therapy for 3 months. eGFR was calculated using the formula of Schwartz [4]. Renal function was graded according to the Kidney Diseases Outcomes Quality Initiative guidelines: stage 1, ≥ 90 ml/ min per 1.73 m2; stage 2, 60-89 ml/min/1.73 m2; stage 3, 30-59 ml/min/1.73 m2; stage 4, 15-29 ml/min/1.73 m2 and stage 5, <15 ml/min/1.73 m2 [5].

Clinical end points were censored on 31st September, 2017. ESRD or death was assigned as a dependent variable. Renal survival was measured from the date of patient chronological ages to the date of initiation of renal dialysis or to the date of first eGFR <15 ml/min/1.73 m2 (Stage 5) or death secondary to renal causes.

The data are presented as mean ± SD or median (interquartile range) or percentage as appropriate. Kaplan- Meier survival analysis was used to estimate patient and renal survival and the log rank test was used to compare the difference between the survival curves. Univariate and multivariate analyses of survival were performed by Cox regression. The results were expressed as hazard ratios (HRs) with 95% confidence intervals (95% CIs).

The Ethics Committee of Medicine Faculty University of Sumatera Utara approved the study and the parents for children gave written informed consent to participate in this study.

Table 3: Mean and median for survival time for all CAKUT patients 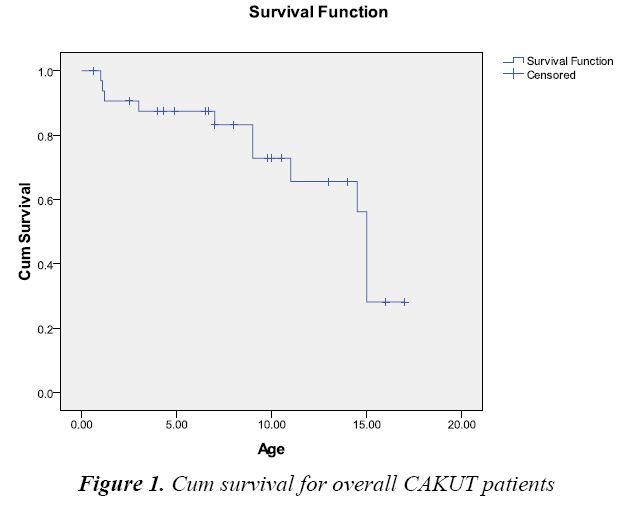 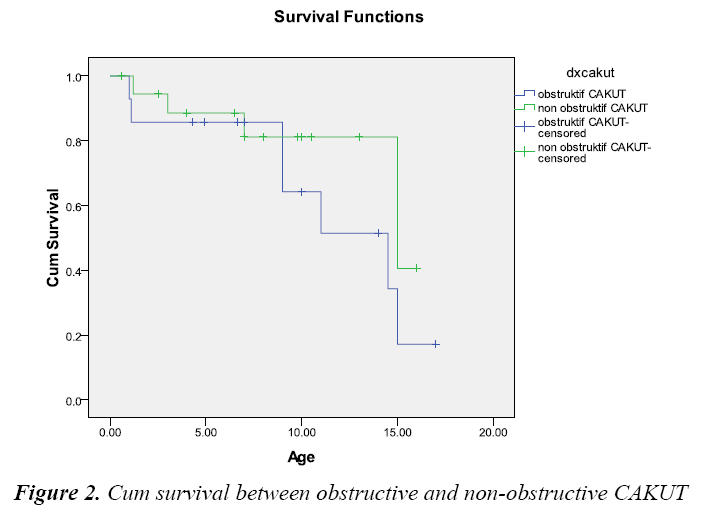 One hundred and ten bacteria were isolated from 20 CAKUT and VUR patients with 110 episodes of recurrent UTI. Micro-organisms causing UTI and antibiotic sensitivity pattern could be seen from Table 5.

CAKUT was the most prevalent primary renal disease that caused to ESRD in pediatric population. They represent a highly heterogeneous group, with a few being incompatible with life while minor abnormalities can be asymptomatic for long periods of time. In CAKUT pediatric population with stage 2 and or stage 3 CKD, had a high incidence of ESRD over 5 years. Anomalies of the kidney are more common than those of the lower urinary tract and often lead to ESRD [6]. CAKUT patients have unique survival renal analysis so to address this hypothesis; we compared rates of progression and outcomes in a subgroup of patients with CAKUT as obstructive and non obstructive. Our data demonstrate that non obstructive CAKUT do not have better survival rates compared to patients with obstructive CAKUT. One factor that almost certainly contributes to this outcome is the lead-time disease and comorbidity burden that affects CAKUT.

Because of high prevalence of CAKUT that delayed presentation in to health centre and usually reported more harmless, patient with CAKUT must be monitored throughout life [7]. Understanding the rate of decline renal function and predicting outcome are crucial for accurate management of CAKUT patients [8]. Some caused of CAKUT such as PUJO and PUV could severely compromise renal function if untreated. In our study, prevalence PUJO and PUV was close to 42.5% (based on all referral to pediatric nephrology in our hospital). The reasons for high prevalence of PUJO and PUV could be due to present early with symptoms of obstructive uropathy. Others such as ureterocele, duplex kidney indication increases risk for UTI and compromise renal function. These abnormalities are often recognized late, mostly when the child has had recurrent UTI. Recurrent UTI and VUR are also risk factor for renal scarring. All of these insults such as VUR, recurrent UTI and voiding disorders may also be increased risk of irreversible renal damage [9]. The severity of a renal insult is a wellestablished risk factor for progression to ESRD. Renal insults that are severe and/or prolonged can disrupt the balance of inflammatory and anti-inflammatory factors required to facilitate adaptive repair processes and thus compromise renal recovery [10].

The increasing accuracy of prenatal ultrasound screening (between 16 to 20 weeks of gestation) has contributed to the increase detection of CAKUT. The frequency of CAKUT as detected sonographically in unselected population has been reported to be between 0.1 to 0.7% [11]. In developing countries such as Indonesia, prevalence of CAKUT was probable underestimated because some of CAKUT cases detected after 4 to 6 months of life after perinatal period or if sign and symptom of CKD was happened. Routine postnatal evaluation by renal USG is recommended within first 24 h of live for infants with a history of oligohydramnions or a solitary affected kidney or bilateral renal involvement because of increased risk for serious renal anomaly. On the other hand, infant with unilateral renal involvement is recommended for renal USG within the first week of live to ensure adequate urine output and avoid underestimate hydronephrosis. Recent technical advances for fetal with CAKUT such as amnioinfusion, fetal paralysis and more-precise catheter placement are widely performed [12,13].

The prognosis in CAKUT depends on initial therapy, compliance to therapy, renal function before and after correction of the obstruction, age at diagnosis, the presence of VUR at the time of diagnosis, accompanying prevention and treating of UTI or Catheter-Associated Urinary Tract Infection (CAUTI), proteinuria and hypertension [14]. All of these factors are helpful to predict the progression of the disease and determine a long-term prognosis [15,16]. The understanding management of CAKUT make it possible for children with CAKUT to have fewer complications, have longer renal survival and survive even with ESRD through renal replacement therapy.

The understanding management of CAKUT makes it possible for children with CAKUT to have fewer complications, have longer renal survival, and survive even with ESRD through renal replacement therapy.

This study was funding by research Hibah Terapan from Ministry of Research Technology and High Education with grant number: 003/SP2H/LT/DRPM/IV/2017.