Psoriasis may bring damage to kidney damage. We conducted a seven-year retrospective study focusing on blood examination of renal function of psoriatic patients. Only those first-time hospitalizations with psoriasis were included. We mainly evaluated the renal function indexes on the first day of hospitalization, including Blood Urea Nitrogen (BUN), Serum Creatinine (Scr) and Blood Uric Acid (BUA) of psoriatic patients and 42 non-psoriasis control subjects. We also analysed the correlation between hospital stays and renal function indexes. A total of 123 moderate-to-severe Psoriasis Vulgaris (PV), 55 Erythrodermic Psoriasis (EP) and 33 Generalized Pustular Psoriasis (GPP) were reviewed. The abnormality rate of BUA in EP was significantly higher than that in PV, GPP and Control Group (CG). The abnormality rate of BUN or Scr presented no significant difference between PV, EP and GPP. The absolute value of BUN in PV was significantly higher than that in EP and GPP. The Scr value in PV was obviously higher than that in GPP. The BUA value in EP was clearly higher than that in GPP and CG. There was no significant correlation between hospital stays and the value in BUN, Scr or BUA. Taken together, EP had more significant hyperuricemia and the patients with EP or GPP need to take in protein actively because of their relative low-level of BUN.

Psoriasis is an immune-mediated inflammatory disease that could bring about increased mortality and various comorbidities, such as cardiovascular diseases, metabolic syndrome, even the kidney damage [1]. T cell activation and the production of cytokines, such as tumor necrosis factor α, play their roles in these abnormal conditions [2]. The chronic inflammatory psoriasis that steadily deteriorate organs like the kidney through producing cytokines and “psoriatic nephropathy” has been talked about in case reports of glomerulonephritis in patients with psoriasis [3,4].

Herein we conducted a seven-year retrospective study focusing on the blood examination of renal function of first-time hospitalized patients with psoriasis.

This retrospective study was approved by the institutional review board of the First Affiliated Hospital of Nanjing Medical University, and all the patient records were anonymized and de-identified prior to analysis.

We collected the inpatients with psoriasis in Department of Dermatology of the First Affiliated Hospital of Nanjing Medical University in China from July 2009 to February 2016. We mainly evaluated the renal function indexes in blood examination on the first day of hospitalization, including Blood Urea Nitrogen (BUN), Serum Creatinine (Scr) and Blood Uric Acid (BUA) of psoriatic inpatients and non-psoriasis control subjects randomly selected from the medical examination center in the same hospital. We also analysed the correlation between hospital stays and renal function indexes.

All statistical analyses were performed by using SPSS version 22.0 software. The normal distribution of continuous variables was verified with the Kolmogorov-Smirnov test. Statistical analyses included Kruskal-Wallis H test and independent-samples T test for quantitative data, and Pearson chi-square test for qualitative data. Linear regression was used to model the relationship between variables. Significance was defined as P ≤ 0.05.

From July 2009 to February 2016, 241 psoriatic inpatients in Department of Dermatology of the First Affiliated Hospital of Nanjing Medical University were recorded, and only 219 cases met the inclusion criteria, including 123 with moderate-to-severe PV (PASI>10), 55 with Erythrodermic Psoriasis (EP), 33 with Generalized Pustular Psoriasis (GPP) and 8 with Psoriatic Arthritis (PsA). The analysis on PsA was neglected because of its small sample size. Some of the patients received topical or systemic treatment; however, none of them was given systemic immunosuppressive therapy within one month before hospitalization. We chose 42 non-psoriasis control subjects randomly from the medical examination center. The age structure of PV, EP, GPP and control group were approximate. The ratio of smokers in our patients was low and similar to control group.

67 of 211 patients were females. The age of patients ranged from 3 to 81 years old, a mean age of 54. The history of psoriasis was from 4 days to 50 years. The abnormality rates showed by renal function indexes and the comparison between the three types of psoriatic patients are listed in Figure 1. The abnormality rate of BUA in EP is significantly higher than that in PV and GPP (P=0 and 0.033, respectively), and GPP has clearly a higher BUA rate than PV (P=0.013). All the three types of psoriatic patients have low abnormality rates of BUN and Scr; there are no significant differences between PV, EP and GPP. All non-psoriasis control subjects have normal renal function indexes except that two cases presented hyperuricemia. Compared with the Control Group (CG), EP has a significantly higher abnormality rate of BUA (P=0). 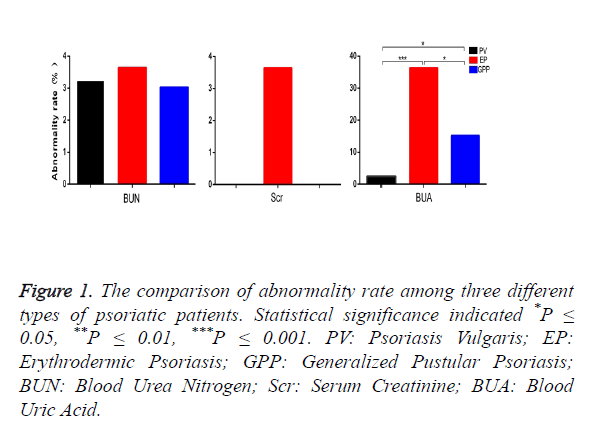 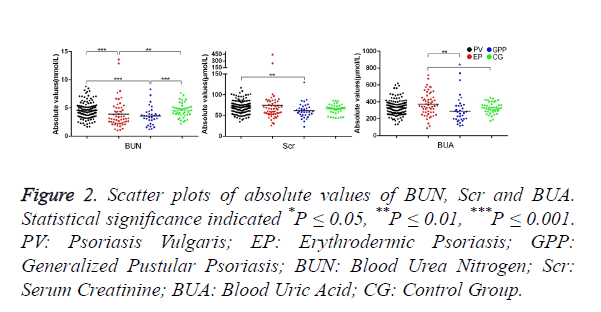 Wan et al. have confirmed a tie between risk of chronic kidney disease and psoriasis, independent from comorbidities, such as diabetes mellitus and metabolic syndrome [6]. Szepietowski et al. revealed an increased prevalence of micro-albuminuria among patients with psoriasis, and proposed microalbuminuria as a subclinical marker of renal impairment in those with psoriasis vulgaris [7]. In our study, the abnormality rate of BUA in EP was significantly higher in comparison with GPP, PV and CG. Meanwhile, the absolute value of BUA in EP was clearly higher than that in GPP and CG. Taken together, EP seemed more vulnerable to hyperuricemia than those with other types of psoriasis or non-psoriasis, in parallel, EP has higher PASI scores. On the other hand, age, course of disease and smoking habit had no significant effect on BUA of EP patients.

Eisen et al. reported the metabolism of BUA in patients with psoriasis, and found that patients with extensive skin involvement had a higher incidence of hyperuricemia and that the level of BUA might have link with excessive epidermal proliferation [8]. Based on these, we think the significantly higher BUA in EP might be induced by severer systemic inflammation and epidermal proliferation, and the incidence of hyperuricemia might be associated with the declined ability of uric acid excretion of the kidney. Hyperuricemia, one of the high risk factors of gout, may be independent of cardiovascular disease [9].

We found the absolute values of BUN in both EP and GPP were lower than that in PV and CG. EP and GPP, two kinds of severe debilitating diseases with extensive desquamation, might exacerbate the nutrient consumption, a condition of hypoalbumineamia, and thereby reduce the level of BUN. BUN reduction is mainly achieved by liver-failure-caused protein malabsorption, poor protein intake or excessive protein-losing. The latter is often found in EP and GPP.

However, attention should be paid to drug’s effect on renal function, such as immunosuppressive agents. MTX has once been recognized as a highly efficacious and safe agent in treating both psoriasis and PsA [11]. It’s an anti-metabolic drug that blocks the chain elongation of DNA [12]. Its elimination is mostly done through renal glomerular filtration and tubular secretion; so the renal etiological damage induced by MTX can precipitate the drug to secrete its metabolites into the renal tubules and furthermore damage the tubular cells [13]. Cyclosporine is a routinely-used immunosuppressive drug to treat psoriasis through blocking the transcription of cytokine genes in T cells. Cyclosporine could change renal structure. With a small decline in glomerular filtration rate, it could increase the level of serum creatinine [14]. About the chronic renal damage, some evidence showed a link between renal disease and psoriasis (along with the deficiency of vitamin D), especially with plaque-like psoriasis [15]. Our patients were not given systemic immunosuppressive therapy within one month before hospitalization, there were no significant effect of immunosuppressive drug on actual data. Because the level of serum vitamin D of most of the patients was absent, for this reason regrettably, we could not analyse the relation between renal function and serum vitamin D.

The major limitation of this study lies in its retrospective nature, or its single center research.

In conclusion, psoriatic patients could develop a category of renal function abnormalities, as is mainly shown by hyperuricemia in EP patients which is related to high PASI scores, but not age, course of disease or smoke. The patients with EP or GPP need to take in supplementary protein actively because of low-level of BUN.

This work was supported by the National Natural Science Foundation of China (81301387), and the Priority Academic Program Development of Jiangsu Higher Education Institutions (JX10231801).

The authors have no conflict of interest to disclose.