Removal of NOx in the presence of oxygen over Mn/BaO/Al2O3 catalysts.

In this study, the influence of Mn content on the NOx decomposition in the presence of oxygen over xMn/BaO/Al2O3 catalysts (x is molar ratio of Mn/Ba) was investigated. Samples were characterized by N2 adsorption, XRD and SEM-EDX. The Mn loading, the dispersion of Ba on the surface and the BET surface area are the key factors affecting the NOx removal activity of the catalysts. The maximum conversion of NOx was obtained with 0.5 MnBa/Al sample. Lower and higher Mn loading resulted in a significant loss of the overall efficiency of NOx conversion. The lower NOx conversion at lower Mn loading (x=0.1) demonstrated that oxide manganese is the catalyst active site. The loss in efficiency observed at higher Mn loading is attributed to the lower dispersion of Ba on the surface, which could decrease the NOx storage ability, and the lower BET surface. There is no NOx conversion on support γ-Al2O3 or Ba/γ-Al2O3.

As a result of environmental legislations on the CO2 emission from automotive source [1], the development of diesel and leanburn engines is in perpetual growth since several years. Due to the presence of excess of oxygen in the exhaust gas, abatement of NOx remains very difficult and industrial or academic research groups are forced to propose new technological solutions. Three main processes can be used to eliminate NOx in excess of oxygen [2,3]. The first one is the Selective Catalytic Reduction (SCR) of NOx. Numerous reducers have been investigated in the literature, such as hydrocarbons [4-8], oxygenated compounds [9,10] and nitrogen containing compounds (ammonia, urea, …) [10-14]. Although selective catalytic reduction by ammonia is currently the most widespread method for the cleanup of flue gas from stationary sources, many problems still exist because of the dangers of storage, leakage and transport of liquid ammonia [15]. The second possible solution is the use of the NOx storage reduction (NSR) catalyst [16], working in transient periods. During the lean condition, NOx are firstly oxidized and stored as nitrites or nitrates on a basic material, usually barium oxide. Periodically, the catalyst is regenerated: the stored NOx are reduced in N2 during a short excursion in rich condition. Nevertheless, the major drawback of this system is the deactivation of the catalyst, mainly due to sulphur poisoning [17,18] and the thermal aging [19,20]. The third solution is the catalytic decomposition of NO into N2 and O2 (2NO Δ N2 + O2). This reaction is one of the most attractive methods because this reaction is thermodynamically favorable and does not need any reductants [15]. Thus, several studies on the direct decomposition of NOx were performed on the catalytic systems based on noble metals [21-23]. However, the problem in using a single crystal metal to dissociate NO is that in the presence of excess oxygen, the active metal can be oxidized easily to metal oxides or makes an oxygen ad-layer over the metal surface that hinders the dissociation process.

The purpose of this study is to develop new catalyst formulations based on manganese oxide supported on alumina with modification of its basicity by Ba addition for NOx removal by direct decomposition pathway in the presence of an excess of oxygen.

The catalyst was prepared by deposition of Ba (20 wt% BaO) and Mn on γ-Al2O3 (150 m2/g) by impregnation method as reported on [24-28]. Alumina powder was immersed in an ammonia solution (pH=10) at 60°C and was impregnated using a barium nitrate and manganese (II) nitrate. After 30 min, the solution was evaporated at 80°C under air and the resulting powder was dried at 120°C. After drying, the catalyst was calcined at 550°C for 4 h. The Mn/Ba molar ratio (noted x) was varied between 0.1 and 1.5. The obtained catalysts are noted xMnBa/Al.

A fixed bed reactor was used to measure the NOx conversion on the catalysts. Before each test, the catalyst (0.1 g) was pretreated in situ for 1 h under 10% H2 in N2 mixture at 450°C. The samples were then cooled down to 350°C under N2. The NOx conversion was studied at 350°C with lean mixture as reported in Table 1. The gas was introduced to the reactor using mass-flow controllers and the GHSV was maintained at 36.000 h-1. Both NO, NO2 were followed by chemiluminescence. For each studied sample, the activity of the catalysts was followed during 3 h. In this study, NOx conversion was calculated as [NOx outlet]/[NOx inlet] × 100%.

The BET surface areas were deduced from N2 adsorption at −196°C carried out with a Micromeritics apparatus. Prior to the measurement, the samples were treated at 250°C under vacuum for 8 h to eliminate the adsorbed species. X-ray powder diffraction was performed at room temperature with a Bruker D8 using a Kα Cu radiation (λ=1.54056 Å). The powder was deposited on a silicon mono-crystal sample holder. The crystalline phases were identified by comparison with the ICDD database files. Energy-dispersive X-ray spectroscopy of the catalysts was obtained using a JEOL JSM-7401F apparatus.

The X ray diffractogram obtained with 1.0 MnBa/Al is reported in Figure 1. The main crystallized phases detected by X-ray diffraction are BaCO3 and MN2O3. However, the average oxidation degree of manganese (obtained by TPR, result not shown) is between 3 and 4. 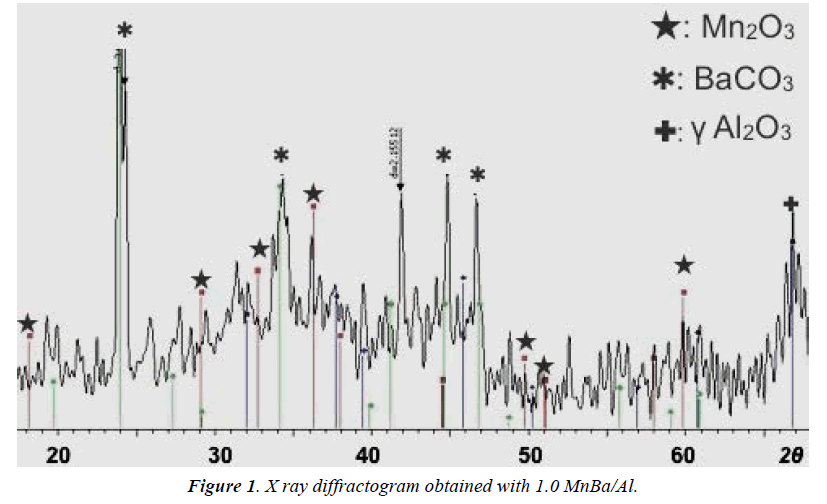 Results obtained at 350°C are reported in Table 2. First, it was observed that some NO conversions are negatives. As a consequence, it can be deduced that NO2 was partly decomposed into NO at 350°C and leads to the decrease of NO conversion. However, as the concentration of NO in the NOx mixture is small (1%), the real value of NO conversion cannot be examined. From now on, we focus only on NOx total conversion.

The NOx conversion on the support alumina decreases strongly with the test duration, from 22% (after 1 h) to 3% (after 3 h). This result induces that there is no NOx conversion over alumina but only some NOx storage capacity of alumina which rapidly tends to be nil with the saturation of NOx storage sites.

The role of BaO

In our previous studies on NOx-trap catalysts [24-28], BaO was used in order to store NOx during the lean phase. So, in this study we decide to add BaO to the catalysts NOx direct decomposition in order to increase the residence time of NOx on catalysts. The same trends as gamma alumina were observed for Ba/Al catalyst. The NOx conversion decrease from 49% to 1% with the increase of test duration from 1 h to 3 h). However, the Ba addition leads to the higher NOx storage capacity, which could be positive for the NOx residence time on catalysts.

The role of manganese

NOx conversion efficiency is presented in Figure 2 as a column style with the surface B.E.T (m2/g) of catalysts. For comparison, Ba/Al is also reported. Concerning the role of Mn in the NOx conversion, the presence of Mn leading to higher NOx conversion. NOx conversion after 3 h the reaction over xMnBa/ Al catalysts are always higher than Ba/Al. Two different trends of catalysts performances are observed depending on the Mn loading. With 0.1 MnBa/Al and 1.5 MnBa/Al: NOx conversions decrease strongly with the test duration. For example, NOx conversion drops from 30% (after 1 h) to only 7% (after 3 h) over 1.5 MnBa/Al. On the contrary, with 0.5 MnBa/Al and 1.0 MnBa/Al samples: NOx conversion becomes near constant at around 52-55% during 3 h. This result is totally different with the support alumina or Ba/Al and indicates that Mn is the active site of NOx removal via direct decomposition pathway. In the other hand, with the presence of Mn, the NOx storage sites could be regenerated during 3 h of test.

Figure 2. NOx conversion efficiency (%) over Ba/Al, xMnBa/Al catalysts during 3 h of test and surface B.E.T of these samples.

In order to have a better understanding of the role of manganese depending on its loading, further investigations were done. First, the increase of the manganese content leads to a significant decrease of the specific surface area. It drops from 122 m2/g for 0.1 MnBa/Al to 116, 104 and 82 m2/g for 0.5 MnBa/Al, 1.0 MnBa/Al and 1.5 MnBa/Al, respectively. The EDS measurements (Figure 3) indicate that with increasing Mn content in the samples, the amount of the Mn sites (red) on the surface also increases. As an active site for NOx removal, a higher amount of Mn sites on 0.5 MnBa/Al catalyst (compare with 0.1 MnBa/Al) leads to a better NOx conversion. However, a higher Mn loading also induces a blockage of Ba sites by Mn sites on the surface: the moles ratio Ba/Mn on the 1.5 MnBa/ Al sample obtained by EDS is only 5/95 while this ratio must be 40/60 (theory). A strong decrease of the amount of Ba sites on the surface leads to a significant losses of NOx removal efficiency.

The NOx conversion efficiency via direct decomposition pathway strongly depends on catalyst formulation. The catalysts without Mn (γ-Al23 and Ba/Al) show no ability to convert NOx but only able to store NOx. Mn addition induces different behaviors depending on the Mn loading. With 0.5 MnBa/Al and 1.0 MnBa/ Al, a significant enhancement of the NOx conversion is observed after Mn addition. However, lower or higher Mn loading resulted in a significant loss of the overall efficiency of NOx conversion. The lower NOx conversion at lower Mn loading (x=0.1) demonstrated that oxide manganese is the catalyst active site. The loss in efficiency observed at higher Mn loading is attributed to the lower BET surface and the lower dispersion of Ba on the surface, which could decrease the NOx storage ability.