Biomass has great potential to become an economic source of renewable energy; however, its high chlorine and alkali metal content may cause series problems (e.g. slagging and corrosion) thus limiting its utilization. This paper reviews the release of potassium during biomass thermal conversion. Organic potassium is released first when the temperature is relatively low, starting at about 473 K and slowing down at about 773 K; the release of inorganic potassium occurs with the increase of processing temperature. The potassium vapors are mainly in the form of KCl, KOH and K2SO4. In addition to the temperature, the properties of biomass, fuel-air ratio, pressure and heating rate also significantly influence the release rate of alkali metals. Future studies are required to develop accurate kinetic models of potassium release to address the ash related challenges when firing and co-firing biomass with high inherent alkali content.

Biomass is material derived from living or recently living organisms and is a potential source of energy with very specific properties. Biomass has great potential to replace fossil fuels in energy systems, offering environmental benefits due to its carbon neutrality and renewability. However, the firing and co-firing of biomass can lead to problems such as slagging, fouling and metal corrosion, due to its high chlorine, potassium and sodium content. During thermochemical conversion, the alkali species can be released from biomass through vaporization; the gaseous species can react further or undergo physical transformations to either condense on fly ash or form aerosols, which can further deposit on heat transfer surfaces and lead to complex metal reactions [1] resulting in corrosion on these surfaces due to the interaction between the alkali species and metals.

Ash related slagging and fouling remains a major technical challenge in the thermochemical conversion of biomass. Better understanding of the release behavior of alkali metal species is crucial to overcome these problems. Consequently, there have been several studies to determine the yield and release rate of alkali metals, especially potassium [2-5]. Generally, potassium is an essential macro-nutrient for growing plants, especially woody plants, while sodium is not an essential stimulant and actually toxic at higher concentrations. In fact, the proportion of potassium is approximately one to two orders-of-magnitude larger than that of sodium in wood [6,7]. This has also been reflected by the size of the literature, as studies of the release and influence of potassium are more common than those of sodium [8]. In consequence, this paper considers potassium as representative alkali metals and its release behavior during the biomass thermal conversions will be reviewed.

Alkali metals in biomass mainly exist in three forms: organic form (e.g. R-COO-K+), inorganic salts (e.g. KCl, K2SO4) and mineral form (e.g. K2O3Si). Minor amounts of bounded potassium are considered stable and nonvolatile during thermal conversion, so the study of release of potassium focuses on the organic and inorganic forms. During devolatilization, organic alkali metals and loosely bonded free ions are primarily released at relatively low temperatures, while the release of more strongly bonded alkali metals requires a higher temperature that normally occurs at the char oxidation stage [1]. The occurrence of chemical reactions and phase transformations of alkali metals in the different stages depends on the temperatures of the gases and solids and the presence of other compounds in the ash, such as chlorine and sulfur. Analysis of these aspects of gas-phase potassium release during biomass combustion has been presented in recent years [9-14].

Experiments carried out in Ref [15] showed that only a small amount of potassium is released, mainly in elemental form at the early stage of devolatilization. During devolatilization, potassium is mainly released as KCl, while the amount of KOH released is relatively small. The release of KOH increases at the char burnout stage. KCl, K2SO4 and KOH are the common potassium species released from biomass during thermochemical conversation [16]; also, the potassium most likely exists in biomass as a dissolved salt in the moisture or as a cation bound to a functional group, e.g. –COOH [17], and the released potassium is likely to form KCl that highly depends on the chlorine content.

Biomass combustion can be described as an initial pyrolysis (to produce gaseous, liquid products and char) followed by char oxidation. Pyrolysis dictates the quantity and type of alkali metals to be distributed into solid, liquid and gas phases. The release of potassium into the vapor phase during biomass pyrolysis happens in two stages [18]. The first stage occurs at temperatures in range of 473 K to 773 K, during which the release of potassium accompanies the evaporation of volatiles during biomass pyrolysis and is independent of the chlorine content of biomass. Organic potassium in biomass is released at low temperatures [16], which occur at the first stage of pyrolysis. When the temperature of pyrolysis is higher than 773 K, at the second stage, the potassium release is highly dependent on the chlorine content, and the inorganic potassium (KCl and KOH) is vaporized into a vapor phase, as illustrated in Figure 1. 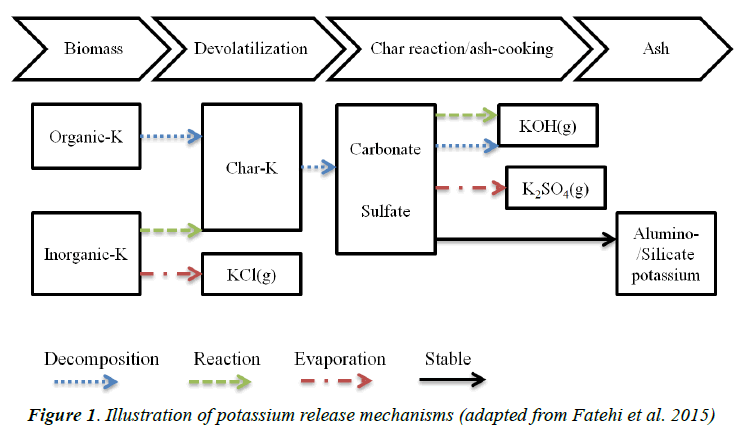 Figure 1 depicts a reaction mechanism for the release of potassium from biomass with low chlorine content [18]. The mechanism reveals, at the pyrolysis stage, that inorganic potassium is partly released into the gas phase in the form of KCl, while the rest of the inorganic potassium and organic potassium remains in the char residue (Char-K). Following the ash-cooking stage, the char reacts with CO2/O2/ H2O to form carbonate, sulfate and silicate groups. The reaction of carbonate with O2/H2O produces gaseous potassium in the form of KOH, which is dependent on the partial pressure of water vapor in the surrounding gas; the evaporation of potassium sulfate can lead to the formation of K2SO4, and the remaining potassium stay in the ash in alumino-/silicate form.

Using a lab scale combustion simulator for different types of biomass, the investigation of [20] found that potassium release in the gas phase is significant; however, the correlation with its original concentration in biomass is not linear, and the presence of other inorganic species (e.g. silicon, aluminum, calcium, and magnesium) have potential impact on the gas phase releases of potassium and sodium. The aluminum and silicon content in biomass act as a buffer [21], which makes the alkali metals significantly less volatile during thermal conversions. In addition, the density, shape and particle size of biomass may also influence significantly the contribution of the inorganic releases during thermochemical conversions [20,22].