Infant Mortality Rate (IMR) is a comprehensive index reflecting the politics, economic, culture, education and health status of a country or region. In the process of building a welloff society in an all-round way, the IMR is an important index to measure the life-off index [1]. The economy is one of the important factors for IMR. In 2000-2009, the Gross Domestic Product (GDP) per capita and the percentage of Government Health Expenditure (GHE) to GDP significantly affect the IMR in 53 African countries [2]. In 2004-2013, the GDP per capita and GHE per capita have a negative correlation with IMR in members of Organization of Petroleum Exporting Countries (OPEC) [3]. A higher GDP per capita in 73 countries with armed conflict is associated with a reduction in IMR [4].

Researches also show that, there is a significant negative correlation between economic growth and IMR in China [5,6]. Have this negative relationship turned from a previous period of the past? Does this negative correlation exist in the future? These issues are still lack of in-depth study. Previous scholars have studied the relationship between rapid economic growth and IMR, and distinguished two successful types of model in reducing IMR. The first is growth-mediated type, which plays a role by high-speed economic growth. The second is supportled type, which plays a role not by high-speed economic growth, but by a well-planned social assistance program. When using China before the reform as the object of study, it is found that the rapid economic growth has not been achieved but the IMR rate has been reduced effectively. This is a typical example of “support-led” [7]. In the past 30 years of reform and opening up in China, what kind of type is suitable for the decline of IMR? This problem should be paid attention. Understanding the turning point of economic growth to the change of IMR has the guiding significance for the development and implementation of effective investment policies in poor areas and underdeveloped areas. Summarizing the successful types of prevention and control experience and exploration of new operating mechanisms will help to further reduce IMR. Based on the data of historical IMR [8-10] and national surveillance of IMR in China [11], this study investigated the relationships among GDP per capita, GHE per capita and IMR in China, and explored the new model to reduce the IMR. The objective was to provide a decisionmaking reference for benefiting the health of children's investment and support policies.

IMR, GDP per capita and GHE per capita were calculated in the Excel worksheet. The bivariate Pearson’s correlation analysis was performed using the SPSS 17.0 statistical software. P<0.05 was considered as statistically significant. If there was statistical significance, the degree of correlation was judged according to the size of |r|. |r| ≥ 0.95, 0.95>|r| ≥ 0.8, 0.8>|r| ≥ 0.5, 0.5>|r| ≥ 0.3 and |r|<0.3 presented significant, high, moderate, low and no correlation, respectively.

Correlation among GDP per capita, GHE per capita and IMR

Table 3. Correlation among of IMR, GDP per capita and GHE per capita in China at different stages in 1952-2014.

Table 4. Comparison of the average development level in IMR, per capita GDP and per capita GHE in China. 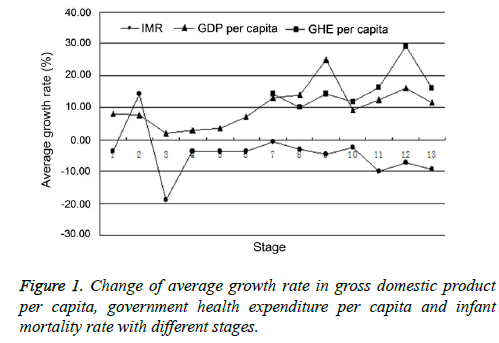 Results of this study indicated that, the negative correlation between per capita GDP and IMR did not always exist. During early years of the new nation of China, the IMR was as high as 200%. In 1960-1965, the decline rate of IMR was accelerated after the rebound. The main reason was that, during the three years of natural disasters, the IMR rebounded. After the famine was corrected, the IMR dropped to normal levels. It dropped to 82.2% in 1970. There was no correlation between per capita GDP and IMR in the 4 stages of 1952-1970. This indicated that China had made remarkable achievement in making IMR fallen significantly. Before liberation of China, the people are very destitute. During the early years after liberation, China was still very poor. However, with the gradual stability of the social order, the people's nutrition and health status had been improved after the basic life was gradually guaranteed. The country promoted the popularization of laws on new midwifery, birth control and vaccination, and gradually established a service system of MCH. Particularly, the barefoot doctors were popularized in rural areas, and the IMR decreased rapidly [14]. Foreign research showed that, during the Iraq war, the IMR rebounded [15]. After the end of the war, the IMR rapidly declined. In 1989-2012, the implementation of the peace agreement was linked to the mortality rate of new-borns, infants and children below 5 years old in 73 armed conflict countries in the world. The continued armed conflict led to large-scale migration of population, destruction of the economic, medical and human infrastructure, which hindered the improvement of children's survival [4].

China's achievements are not only the result of the founding of the new China, but also the implementation of national support policy. In the beginning of the last century, the IMR and economic growth began to show a negative correlation, and the average growth rate of per capita GDP was only 3.58%. The economic growth not only played a role in the decline of infant mortality, but also fully explained the key synergic effect of “support-led” national policy in the same period. With the deepening of reform and opening up and the rapid economic growth, this kind of negative correlation still existed, excepting 1980-1985 years. This was related to the fluctuation of IMR in the late 70s and early 80s, which might be due to the fact that, the children death reporting system had not been established. The IMR after reconstruction and adjustment was still lower than the actual level at that time. Perhaps a decline in IMR was not with a smooth and uniform decline, which was due to an annual fluctuation in the course of the decline in IMR. Whether this role would continue to exist in the future? It is speculated that, when the IMR continued at a low level [16], its cause was a difficult problem to be solved in medical science, and the economic growth would be difficult to play a significant role in the decline of IMR. So this kind of negative relationship would not exist. After entering the initial relevant turning period, the orderly and appropriately increased GHE and timely regulating prevention and control strategies could promote the decline in IMR. Social development, economic growth, material wealth, income growth and improvement of living conditions help to improve the quality of life and health conditions. At the same time, the economic development is the foundation of national health investment. It can promote the progress of medical science, make the health care possible, and create conditions for the prevention and control of the disease and promotion of health. In addition, with the development of the social economy and the popularization of education, the population health and health care awareness have been continuously strengthened. As a result, the economic growth plays an indirect role in the decline of IMR.

In the early ten years of reform and opening up, the prototype of the framework system of maternal and child health policy in China was established. In 1990s, the policy of maternal and child health was fully improved. Since 21st century, the policy of maternal and child health developed to the equalization of the direction of the people. In following 30 years, this policy transferred from the prevention and treatment of disease to the improvement of the quality of life. The “support-led” is the government's active function. Once the “support-led” effect is lost, and the measure of prevention and control to infant mortality carry out unsuccessfully, the IMR world not decline or even rebound. The “growth-mediated” has the amplification effect on economic growth, and the effect on IMR is indirect and passive. The only way to change the passive to active role is to increase the health investment. Columbia government actualizes the fiscal decentralization, decentralizes the health care spending, and improves the medical insurance system, which has reduced the IMR [17]. Uganda government implements a path of decentralization, and increases the supply of public goods such as health services, which has promoted the decline in infant IMR [18].

The “surpass-growth and support” is the inevitable requirement of the new model. On the one hand, it is required to closely link to the national development strategy, change the mode of economic growth, cultivate new economic growth point, and explore the sustainable development mode to promote a healthy economic growth. On the other hand, it should be based on the benefit of the people's livelihood, and it is required to increase the health investment, maintain the health investment growth rate. The health work should be vigorously implemented, and the effectiveness of the protection of people's health should be fully developed.