Relationship of metformin with the risk of pancreatic cancer in patients with type 2 diabetes: a meta-analysis

Aims: This study is to systematically investigate the relationship between metformin and risk of pancreatic cancer in patients with type 2 diabetes mellitus.

Pancreatic cancer mainly refers to pancreatic exocrine adenocarcinoma that has the characteristics of high malignancy, rapid development, and poor prognosis [1]. In the United States, 43,920 pancreatic cancer patients are diagnosed each year, resulting in approximately 37,390 deaths [2]. Pancreatic cancer is the fourth most common cause of cancer death worldwide [1,3]. Radical surgery is one of the treatment methods for pancreatic cancer [4]. However, early diagnosis is difficult with low general surgical resection rate from 10% to 30% [4]. Chemotherapy may improve the quality of life but not the long-term survival [5]. Radiotherapy can relieve the pain, but not other symptoms [6]. Smoking, excessive drinking, chronic pancreatitis and family history of cancer are widely recognized as potential risk factors for pancreatic cancer [7]. In addition, epidemiological studies have shown that diabetes, especially non-insulin-dependent diabetes mellitus (Type 2 Diabetes, T2DM) can increase the risk of pancreatic cancer [2,8,9]. In recent years, the incidence of pancreatic cancer in T2DM patients significantly increased, and the prognosis is poor in most patients because of difficulty in early diagnosis, high degree of malignancy, rapid development and lack of treatment with 5-year survival rate of less than 5% [10].

We included studies that met the following criteria: 1) published studies on the relationship between metformin and pancreatic cancer in T2DM patients; 2) similar study aims and statistical methods with complete data; and 3) cohort study or case-control study. In the cohort study, the metformin group was treated with metformin, and the control group was treated with other antidiabetic drugs (including sulfonylureas, thiazolidinediones, or insulin). In the case-control study, case group were T2DM patients with pancreatic cancer, control group were T2DM patients without pancreatic cancer, and exposure was metformin.

We excluded studies that met the following criteria: 1) flawed study design flaws with incomplete data; 2) exposure factors were not metformin; 3) no evaluation of relationship between metformin and pancreatic cancer; or 4) duplicates.

All articles were reviewed by two reviewers to independently screen titles and abstracts, and review the full-text of the eligible articles. Two reviewers extracted and compared information of all included articles, and evaluated their quality. When they disagreed with each other, disagreements were either discussed to reach a consensus between the two reviewers or decided by a third reviewer.

Studies were evaluated for methodological quality based on Newcastle-Ottawa Scale (NOS) score [23] in terms of selection of case and controls, comparability of cases and controls and ascertainment of exposure. The evaluations were performed by the two independent reviewers, and ≥ 7 points were considered as high-quality literature with the highest score of 9 points.

Meta-analysis was performed using RevMan5.2 (Cochrane Collaboration) [24]. Quantitative data used relative risk (RR) for efficacy analysis and categorical data used Weight Mean Difference (WMD), presented as 95% Confidence Interval (CI). χ2 test was used for heterogeneity analysis, and heterogeneity was assessed by I2. If P>0.1 and I2<50%, the fixed effects model was used; otherwise, the heterogeneity was assessed to determine whether random effects model can be used. If there was obvious statistical heterogeneity but clinical homogeneity among all studies or subgroups, random effect model was used. Sensitivity analysis was performed for each outcome. A funnel plot was used to detect the presence of publication bias.

A total of 425 references were reviewed, and 9 studies were finally included after reviewing abstracts, inclusion and exclusion criteria. Seven of them [20,25-30] were cohort studies and two were [31,32] case-control studies. The characteristics of all included study were shown in Table 1, and the diagram of literature screening was shown in Figure 1. 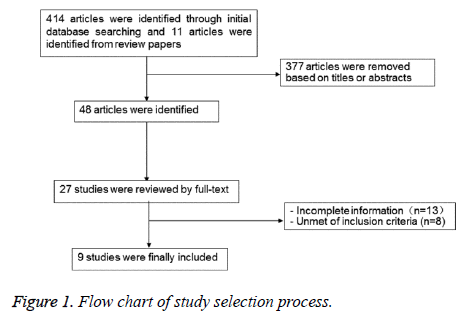 NOS score was used to evaluate the quality of all studies. As shown in Table 2, the NOS score suggested that the included studies were of high quality.

Comparison of metformin and non-metformin drugs

Figure 2: Comparisons of metformin and non-metformin in the treatment of pancreatic cancer in patients with type 2 diabetes mellitus by meta-analysis.

Comparison of metformin and sulfonylurea drugs

Figure 3: Comparisons of metformin and sulfonylurea drugs in the treatment of pancreatic cancer in patients with type 2 diabetes mellitus by meta-analysis.

Comparison of metformin and insulin

Figure 4: Comparisons of metformin and insulin in the treatment of pancreatic cancer in patients with type 2 diabetes mellitus by metaanalysis.

This study showed that Metformin could effectively reduce the risk of pancreatic cancer in patients with diabetes when compared with sulfonylureas, insulin and other non-metformin drugs from analysis of nine high-quality clinical studies. Metformin was associated with a 61%, 57% and 61% decrease in risk compared with non-metformin, sulfonylureas and insulin. The sensitivity analysis showed that the results were stable. In a meta-analysis, Wang et al. [40] showed that metformin may reduce the risk of pancreatic cancer in T2DM patients. However, the meta-analysis was limited in that 1) it included both cohort study and case-control study with completely different data extracted from the treatment and control group; 2) two studies (Currie et al. [25] and Little et al. [41]) reported no data for RR calculation; and 3) incomplete literature review with low NOS score after 2012. Yu et al. [42] showed that metformin reduced the risk of pancreatic cancer by 51% and 53%, respectively, compared with sulfonylurea and insulin group; however there were no analysis of case-most obvious (normalized relative risk of incidence SRR=0.54, 95% CI 90.35, 0. 830; mortality SRR=0.64, 95, 95% CI (0.48, 0.86)). However, in their study, subgroup comparisons with other specific hypoglycemic agents were not analysed. Sadeghi et al. [44] showed that the use of metformin was associated with an increased survival rate in T2DM patients with pancreatic cancer. Consistently, we found that metformin had protection effects on pancreatic cancer in T2DM patients. Furthermore, the literatures included in this paper were of high quality and published in the near 10 years with NOS score of 7 to 9 points, indicating the robustness of the conclusions.control studies. In a meta-analysis of relationship between metformin use and cancer [43], it showed that metformin may reduce the incidence and mortality of multiple malignancies, including liver, pancreas, colon and lung cancers. The reduction in incidence and mortality of pancreatic cancer was

However, there are still some limitations in this study. Only a few cohort studies were included, and some of the literature did not provide detailed information on age, gender, dosage of metformin and other hypoglycemic agents, and length of use. Therefore, the above calibration parameters cannot be excluded. In addition, most of the included studies were in English language, indicating language bias. Calibration parameters including smoking, alcohol, race, region, and pancreatic cancer lesions were not analysed, introducing potential bias of this study. Last but not least, clinical randomized controlled trials were not identified.

This work was supported by General project of Hangzhou Health Science and Technology project (No. 2015A53).