Relationship between the poor glycemic control and risk factors, life style and complications

Diabetes Mellitus (DM) prevelance of which is growning gradually is one of the major causes of morbidity and mortality worldwide. DM is the most common chronical illness at adults. It is estimated that 300 million people will have DM by 2025 and it will reach approximately 439 million and the prevelance is estimated as 7.7% by 2030. It is anticipated that 3.96 millions of patients with DM will die annually related to the diabetes and it will compromise 6.8% of all the causes of death [1-3]. Awareness of DM in Turkey is still quite poor as a developing country. The decrease of blood glucose levels in patient with DM decreases the mortality and morbidity rates significantly. The main purpose in patients with DM is to achieve and to prevent the glycemic control. In randomised prospective clinical trials and epidemiologic studies, it has shown that microvascular and macrovascular complications are reduced by obtaining the glycemic control. Achieving the glycemic control is the most important issue to prevent the organ damage and not to occur other complications of DM [4].

The study included 757 patients who were undergoing treatment and follow-up by Sisli Etfal Education, Research Hospital Internal Medicine Department and Bezmialem Vakıf University Internal Medicine Department, with diagnosis of type 2 DM were aged 18-70 years. Our study was designed as a sectional observational study. We included patients were admitted to our hospital with the diagnosis of type 2 DM between August 2013 and September 2015. The diabetic patients who were diagnosed as type 1 diabetes mellitus were excluded.

Demographic information (i.e., age and gender) was documented for all patients. Height (m) and weight (kg) measurements were obtained to calculate the BMI. BMI was calculated by dividing weight in kilograms by the square of height in meters. Waist circumference (cm) was measured midway between the lower rib margin and the iliac crest. Systolic and diastolic blood pressures were measured using an automatic sphygmomanometer with an appropriate cuff size on the right arm after a resting period of 10 min. Patients were diagnosed as DM according to the criteria of American Diabetes Association (ADA). Duration of the illness and DM disease onset age were documented. Patients whose systolic/ diastolic blood pressure is ≥ 140/90 mmHg or who is on an antihypertensive treatment were accepted as hypertensive patients [7]. Patients whose BMI is <25 kg/m2 were considered as normal, 25-29 kg/m2 as overweight and ≥ 30 kg/m2 as obese [8].

Furthermore, dietary compliance, physical exercises, blood glucose monitoring at home and medicine compliance have been questionized. Smoking, alcohol consumption and patients’ medical treatments for diabetes (only oral antidiabetics (OAD), only insulin or both) have been documented. Data on self-management behaviors included diet, exercise, and self-monitoring of blood glucose. These were collected to assess the adherence to diabetic control measures that included physical exercise, diet, and blood glucose testing [9]. Self-management behaviors were assessed using the Summary of Diabetes Self-Care Activities Measure scale [10], which contains eleven question items designed to ask the patients about their diabetes self-care activities during the past 7 days. If patients were sick during the past 7 days, they were asked to think back to the last 7 days that they were not sick. Medical adherence was determined by self-reporting with the use of the eight-item Morisky scale [11]. The scale contains questions asking the patient to respond “yes” or “no” to a set of eight questions. A positive response indicates a problem with adherence. Therefore, higher scores indicate that a patient is least adherent to medications. In this study, a positive response was awarded one point and a negative response was awarded zero points. Patients were classified as highly and moderately adherent (score of 0-2), and least or not adherent (score of 3-8).

Patients fasted after midnight and blood samples were drawn in the morning of the next day from an antecubital vein into vacuum tubes for laboratory tests, which were sent to the central laboratory. The levels of Hemoglobin A1c (HbA1c) and fasting glucose levels, lipid profiles (high density lipoprotein (HDL), low density lipoprotein (LDL), triglyceride, and cholesterol) were measured for each patient. Blood glucose and lipid profile were measured by enzymatic methods. HbA1c were measured by immunoturbidimetric method and high performance chromatography respectively and lipid profile was analyzed by automatic spectrophotometer. Patients whose HbA1c levels <7% were considered as with good glycemic control; and whose HbA1c ≥ 7% were considered as poor glycemic control [7]. Based on the values of ≥ 200 mg/dl for cholesterol; <50 mg/dL (women) and <40 mg/dL (men) for HDL; ≥ 100 mg/dL for LDL and ≥ 150 mg/dL for triglyceride; the patients whose values are higher of these values or who are on treatment in spite of the normal results were considered as dyslipidemic [7].

All participants provided written consent for participation in the study. Ethics approval for conducting this study was received from the Ethical Committee of the Sisli Etfal Education and Research Hospital (Istanbul, Turkey). All procedures were in accordance with the ethical standards of the committee on human experimentation of our institution and with the Declaration of Helsinki. 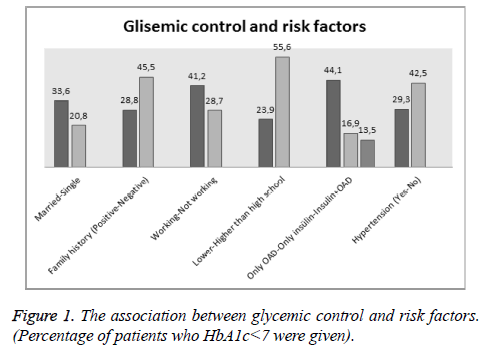 Figure 1: The association between glycemic control and risk factors. (Percentage of patients who HbA1c<7 were given).

Table 1. The association between poor glycemic control and demographical, clinical and antropometrical factors. 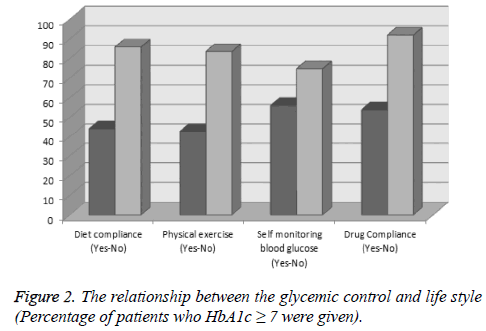 Figure 2: The relationship between the glycemic control and life style (Percentage of patients who HbA1c ≥ 7 were given). 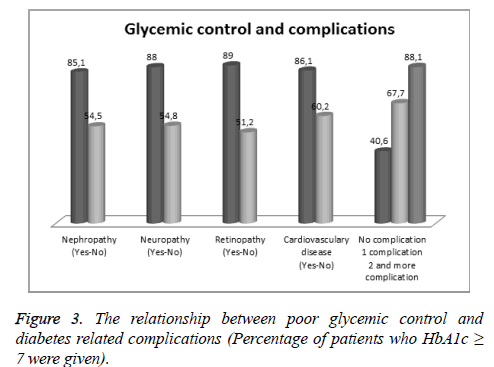 Figure 3: The relationship between poor glycemic control and diabetes related complications (Percentage of patients who HbA1c ≥ 7 were given).

DM is one of the most important diseases of this era which is complicated, hard to control and increasing in numbers gradually. Several environmental and genetical factors such as family history, medical status, obesity, sociodemographic features, life style play role in glycemic control. Majority of the patients cannot reach the targeted HbA1c levels as we have shown in our study. EURIKA study which includes the data from 12 European countries showed that only 36% of type II diabetic patients obtain the targeted value [12]. In the study performed in Brasil, HbAc level less than 7 is obtained in 36% of patients [13]. Similar to European countries and Brasil, our study showed that the targeted value of HbA1c<7, was achieved low percentage in Turkish population as well.

In our study it has been shown that the disease onset younger were related to poor glycemic control. In the meta-analysis of ten studies, it has shown that glycemic control is better at patients who are 60 years or older [14]. We suppose that the reason of poorer glycemic control in younger populations compared to elders can be associated with the fact that the young people do not pay importance to their treatments as elders. As like the other reported studies, we have also found a significant relationship between the poor glycemic control and the duration of disease [5,15,16]. Longer duration of diabetes is known to be associated with poor control, possibly because of progressive impairment of insulin secretion with time because of β cell failure, which makes the response to diet alone or oral agents unlikely [17]. When the relationship between the poor glycemic control and medical status is investigated in Turkish population, as parallel to several previous studies, poor glycemic control levels of the patients who is on insülin and oral antidiabetic treatment concurrently have found significantly higher [5,15]. This may be related to the fact that patient treated by insulin or combination therapy have more severe disease that requires more aggressive treatment to control their disease, while patients with milder disease are more easily controlled by diet or oral hypoglycaemic agents.

Type 2 diabetes, a chronic degenerative disease of epidemic proportions, is one of the major challenges to public health in the world. Although effective interventions to reduce the longterm complications are available, the complex interventions required and the size of the diabetic population have made the application of such therapies problematic [20]. For this reasons early and aggressive treatment modalities are recommended. Glucose control remains a major focus in the management of patients with type 2 diabetes. However, this should always be in the context of a comprehensive cardiovascular risk factor reduction program which include smoking cessation and adoption of healthy lifestyle habits, blood pressure control, lipid management and, in some circumstances, antiplatelet therapy [21]. Diet and exercise in the treatment of all stages should be in the forefront. Ideal and personalized medical nutrition therapy applicable though out the life should be planned. While in the recent past only lifestyle changes was the cornerstone treatment of type-2 DM, nowadays the medical treatment is recommended because of insufficiences of nonmedical approaches. In addition to lifestyle changes, current treatment for type-2 DM includes oral antidiabetic agents, insulin or any combination of the above. For the success of stepwise treatment of type-2 DM, drug choices should be based on the different pathophysiological processes. In summary, the effective treatment for type-2 DM depends on the balance between lifestyle changes, diet, exercise and personalized medical treatment. A healthy communication between the patient and health team is of great importance.

In the conclusion, we have shown the relationship of glycemic control with sociodemographic, medical status, life style, lipid levels and complications. Diabetes is a disease which is affected by several enviromental and genetical factors and require multidisciplinary approach for glycemic control. Successfull results can be obtained solely by eradication of the factors (job satatus, marital status, educational status, diabetic medicine treatment, hypertension, BMI, obesity, hyperlipidemia and life style) related to poor glycemic control. To achieve this aim, enhancement of awareness of patients about the disease and providing the life style modifications must be targeted initially.