Methods: The study population consisted of 89 subjects (54 patients with SCF and 35 controls). Coronary flow rate was assessed using the Thrombolysis in Myocardial Infarction (TIMI) Frame Count (TFC) method. The serum endocan and sTM levels of all subjects were analysed.

Conclusions: The endocan level in SCF patients was significantly higher than in controls and the sTM level was also increased, although the difference was not significant. These results suggest that endocan may serve as a biomarker to predict SCF.

The Slow Coronary Flow (SCF) phenomenon is an angiographic finding described as retarded flow of contrast agent to the end branch of a coronary artery without significant coronary stenosis [1]. Although it is well-known among interventional cardiologists that coronary angiography is performed in approximately 1% of patients, the mechanisms underlying this entity have not yet been elucidated [2]. Microvascular dysfunction, endothelial dysfunction, diffuse atherosclerosis, and platelet and vasomotor dysfunction have been proposed in the etiology of SCF [3,4].

Endothelial cell-specific molecule-1, or endocan, is a soluble proteoglycan secreted by human vascular endothelial cells and can be found in the circulation [5]. Previous studies have suggested that endocan plays a key role in the pathophysiology of endothelial dysfunction [5,6].

Thrombomodulin (TM) is an integral membrane type-1 glycoprotein that is widely distributed on the lumenal surface of vascular endothelial cells and has been implicated in the endothelial regulation of fibrinolysis and coagulation. Soluble Thrombomodulin (sTM) can be detected in serum after proteolysis of TM on the endothelium [7]. Previous studies have suggested that the sTM concentration reflects the degree of endothelial damage [7,8].

Because endothelial dysfunction plays an important role in the pathophysiology of SCF, we aimed to determine whether sTM and endocan, two endothelial dysfunction biomarkers, are associated with SCF. Therefore, we investigated the relationship between these two biomarkers and SCF. Few studies have investigated the relationship between endocan and SCF; to the best of our knowledge, this was the first study to measure the concentration of sTM in the circulation of SCF patients.

This was a cross-sectional study, in which 6,517 patients underwent coronary angiography between February 2015 and January 2016. During this period, a total of 89 patients with an initial diagnosis of stable angina pectoris, and who had angiographically confirmed normal coronary arteries without any atherosclerotic lesions and SCF, were enrolled in the study. These subjects were divided into two groups based on flow rate: 54 patients with isolated CSF and 35 subjects with Normal Coronary Flow (NCF) were included in the final analysis.

Coronary angiography was performed using the standard Judkins technique and 6F catheters inserted through the femoral and radial arteries with a Siemens Axiom Sensis XP device (Siemens, Munich, Germany) at a rate of 30 frames per second. Iopromide (Ultravist 370; Schering AG, Berlin, Germany) was used as the contrast agent. Two cardiologists blinded to the study reviewed the angiograms and evaluated the coronary blood flow rates using the Thrombolysis in Myocardial Infarction (TIMI) frame count method (TFC) [9]. The intra- and inter-observer coefficients of variation were 5.2 and 7.8, respectively. The beginning frame was the first frame in which the contrast agent entered the artery completely. The last frame was defined as that when the contrast agent reached the distal endpoint of each vessel. The following distal endpoints of each coronary artery were reviewed: the distal bifurcation in the Left Anterior Descending artery (LAD), the distal bifurcation of the segment with the longest total distance in the Left Circumflex artery (LCX), and the first branch of the posterolateral artery in the Right Coronary Artery (RCA). A normal TFC is considered 36.2 ± 2.6 frames for LAD, 22.2 ± 4.1 frames for LCX, and 20.4 ± 3 frames for RCA. The LAD frame count was divided by 1.7 to obtain a corrected TFC (cTFC) as the longer length of the LAD compared to other coronary arteries. The standard cTFC for the LAD coronary artery is 21.1 ± 1.5 frames. All subjects with a TFC greater than 2 standard deviations above the previously published range for the particular vessel were considered to have SCF [9]. In our study, SCF in any of the three coronary arteries was sufficient to include patients in the SCF group.

Venous blood samples were obtained from all subjects following a fasting period of 12 h. All biochemical and hematologic values were taken on the day of sample collection. Hematologic measurements were determined using the Coulter LH 780 Hematology Analyzer (Beckman Coulter Inc., Co. Clare, Ireland). All biochemical parameters were determined using the Abbott Diagnostics C8000i auto-analyzer (Abbott, Wiesbaden, Germany). Blood samples were collected into plain tubes and serum was separated after centrifugation at 1,500 g for 10 min and stored at -80°C until the levels of endocan and sTM were analysed. Both serum endocan and sTM levels were measured using a sandwich enzyme-linked immunosorbent assay (ELISA) kit with high sensitivity and specificity for the detection of human endocan (Cusabio Bioscience Inc., Wuhan, China). The minimum detectable concentration of endocan and sTM was 0.039 ng/ml and 7.8 pg/ml, respectively. The intra- and inter-assay coefficients of variation were less than 8% and 10%, respectively, for both biomarkers.

The SCF and NCF groups included 54 and 35 subjects, respectively. The baseline characteristics of all study samples are shown in Table 1.

There were more smokers in the SCF group (p<0.013). The levels of serum endocan and high-sensitivity C-reactive protein (hsCRP) were also higher in SCF patients relative to controls (p=0.009; p<0.001, respectively) (Figure 1). The serum lymphocyte count was lower in the SCF group (p=0.005). The TFC of each coronary artery and the mean TFC were higher in SCF subjects (p<0.001). The other baseline characteristics of the study population did not differ significantly between groups (Table 1).

Figure 1: Boxplot graphics for endocan (A) and high-sensitivity Creactive protein (hsCRP) (B) biomarkers.

Figure 2: Scatter plots of correlations of endocan (A) and hsCRP (B) biomarkers with mean variables. 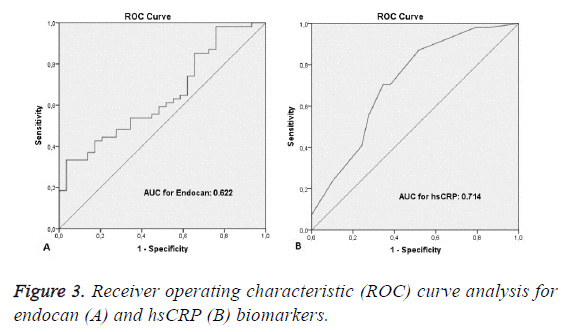 such as endothelial dysfunction, diffuse atherosclerosis, and coronary vasomotor dysfunction, have been associated with this clinical entity [3,4,12].

Endocan is an endothelium-derived soluble proteoglycan that is believed to play a role in the pathogenesis of endothelial diseases, such as hypertension, atherosclerosis, and obstructive sleep apnea [6,17,18]. Moreover, significantly higher endocan levels were detected in subjects with vascular-Behçet disease [19]. In our study, the endocan concentration was higher in SCF patients than in controls, confirming previous reports [10,11].

According to our multivariate logistic regression analysis, circulating endocan was identified as an independent predictor of SCF. A powerful correlation between TFC value and endocan level, and a higher endocan concentration in subjects with SCF involving three vessels versus two vessels or one vessel, allowed us to conclude that endocan may serve as a promising biomarker for the detection and evaluation of SCF. We hypothesize that endocan activates adhesion molecules and increases the secretion of potent chemokines, leading to endothelial dysfunction. It may also enhance the stimulation of vascular smooth muscle proliferation and migration, which could lead to atherosclerosis via neointima formation and, ultimately, SCF [20]. Further studies will help elucidate the exact mechanism.

TM is an integral protein that is widely detected on the endothelial lumen of all vascular structures and is believed to play a role in coagulation, inflammation, and endothelial dysfunction [21]. During endothelial pathologies, TM is released from the endothelium and can be detected in the serum in its soluble form. A significant increase in sTM level has been reported in vascular diseases, such as atherosclerosis, cardioembolic stroke, and sepsis-associated disseminated intravascular coagulation, indicating that sTM may represent a useful marker to assess endothelial dysfunction and vascular risk [22,23]. We also found increased levels of sTM in SCF subjects relative to controls, although the difference did not reach statistical significance.

Several studies have suggested that inflammation may lead to SCF. Li et al. [24] reported increased levels of hsCRP and interleukin-6 in SCF patients. Another inflammatory parameter, NLR, was also reported to be correlated with SCF [25]. Supporting previous reports, higher concentrations of hsCRP and NLR were found in the SCF group relative to controls in our study. These factors were also identified as independent predictors of SCF according to our multivariate analysis.

The relatively small sample size was the main limitation of our study. Although the sample size was sufficient to detect a significant association between endocan and SCF, we were not able to prove an association between SCF and sTM. The crosssectional design was another limitation of the study. Lastly, we did not use intravascular ultrasound or optical coherence tomography to detect cases with normal coronary arteries. Rather, our diagnosis depended on the visible angiograms, which may have biased the randomization of our study population.

We demonstrated that the endocan concentration was significantly higher in SCF patients than in controls and positively correlated with the severity of SCF. Moreover, sTM levels were increased in SCF patients, although the difference did not reach statistical significance. These findings suggest that the endocan level may serve as an indicator to determine the presence and extent of SCF. Further larger investigations are needed to determine the exact role of both endocan and sTM in the pathophysiology of SCF.

We thank the staff of Cathater Laboratories, Şanlıurfa Mehmet Akif İnan Training and Research Hospital, and Harran University (Faculty of Medicine and Department of Cardiology).