#These authors Contributed equally to this work

Objective: To determine the mechanism by which muscle-specific microRNA (miR-206) and the miR-206 target gene insulin-like growth factor (IGF-1) cause myocardial damage in hypothyroidism rat models.

Hypothyroidism-induced cardiac functional changes are caused by myocardial systolic functional changes [1,2]. The cardiac Myosin Heavy Chain (MHC) α subtype expression is regulated by thyroid hormones; the combined influence of T3 and the nuclear receptor TH adjusts α-MHC and β-MHC expression at the transcriptional level. The pathological process of hypothyroidism-induced heart disease is mainly regulated by the decline in, and dysfunction of, myosin ATP enzyme activity. However, the effects of other elements on this process remain to be elucidated [3,4].

Studies have shown that miR-206 expression shows a 58.9-fold increase in the hypothyroidism rat model, compared to the normal rat model [5]. Although the abnormal expression of miR-206 was only observed in the muscle tissue, studies have indicated that it can also be expressed outside the muscle tissue, which results in the manifestation of relative pathological changes [5-9].

The potential regulated targeting of miR-206-insulin-like growth factor-1 (IGF-1) results in the expression of many pathological processes related to cardiac disease, such as alteration of the cardiac ion channel, stimulation of the growth of myocardial cells, increases in cardiac output, and promotion of cardiac blood discharge [10-12]. Simultaneously, IGF-1 also facilitates the relaxation of blood vessels, protects the ischemic myocardium, promotes cardiomyocyte hypertrophy, and enhances myocardial contractility [13-15]. IGF-1 at a low level could be an independent risk factor for cardiovascular diseases [10,16]. The role of IGF-1 in myocardial infarction and hypertension has been extensively researched in recent years. However, the effect of IGF-1 on hypothyroidism has not yet been reported.

In this study, the expressional changes occurring in the myocardial pathological conditions of hypothyroidism rat models were evaluated. In addition, the changes in miR-206 and the miR-206 target gene (IGF-1) expression in the myocardium of hypothyroidism rat models were analysed to determine their roles in myocardium damage. These results could serve as a basis for further discussions and investigations regarding the elements affecting hypothyroidism-based myocardial diseases.

Thirty 8 w old male Wistar rats weighing 200-220 g were obtained from the Dalian Medical University SPF Animal Center (experimental animal certificate number: SCXK (Liao) 2008-0002). These rats were maintained at the Dalian Medical University SPF Animal Center at a room temperature of 20 ± 2°C, relative humidity of 50%, and a light/dark cycle of 12/12 h. The rats were provided with free access to food and drinking water. The cages and bedding material were changed every day; the animal room and drinking bottles were also cleaned regularly. The experimental animals were maintained for 1 w, and then randomly divided into three groups, two primary groups and a secondary group. The primary groups were a normal control group (group C, n=8; fed with normal fodder and deionized water for 28 w) and a hypothyroidism group (group H, n=22; thyroid gland removed via surgery) whose Thyroid Stimulating Hormone (TSH) and Total Thyroxine 4 (TT4) content were measured after 4 w. Thyroid gland removal caused a significant increase in TSH expression and a corresponding decrease in TT4 content, which indicated success in modeling the hypothyroidism rat. These rats were fed with normal fodder and deionized water for an additional 24 w. From this group, a hypothyroidism Levothyroxine (LT4) treatment group (group HL (secondary), n=8) and a hypothyroidism group (group H, n=8) were randomly chosen 16 w after hypothyroidism was confirmed. The rats of group HL were injected with L-T4 (1.25 μg/100 g/d) every day for 8 w, while those of group H were maintained as above. All three groups were subjected to the same total observation period of 28 w; the myocardial tissue was taken from all rats during the 28th w.

The protocols in this study were approved by institutional review board and the Animal Care and Use Committee of the First Affiliated Hospital of Dalian Medical University (Dalian, China).

The myocardial tissue was incubated (24°C) in 4% paraformaldehyde for 24-48 h, and transported to the pathology department of The First Affiliated Hospital of Dalian Medical University for pathology sampling.

Real-time PCR analysis of α-MHC, β-MHC, and IGF-1 mRNA expression in the myocardium

The overall quantity of RNA extracted and the measured concentration and purity of the RNA were determined using the procedures outlined in the previous section. cDNA formation by reverse transcription was accomplished using reaction conditions of 37°C for 60 min and 85°C for 5 s, with the One Step PrimeScript® miRNA cDNA Synthesis reagent kit (Takara Bio Inc.) response system. The samples for realtime PCR were prepared using the SYBR green PCR amplification kit. The ABI 7500 PCR platform was used for amplification; the primers for amplification, miR-206 and U6, were obtained from Takara Bio Inc. (no sequences provided). The PCR system was configured according to the standards set by the SYBR Premix Ex Taq™ II (Perfect Real Time, Takara Bio Inc.) reagent kit response system. Consequently, the following reaction conditions were applied to obtain the required response: 40 cycles of pre-degeneration at 95°C for 30 s, degeneration at 95°C for 5 s, and annealing at 60°C for 34 s.

Approximately 50 mg of rat myocardial tissue was mixed with 100 μL protein extraction reagent (KeyGEN BioTECH; NianJan, China) and protease inhibitor. The sample was ground on ice and incubated for 30 min. This was centrifuged at 9,500 Xg and 4°C for 20 min. The supernatant was extracted, mixed with a coloring agent (KeyGEN BioTECH; NianJan, China), and incubated at room temperature (24°C) for 10 min. The absorbance of this solution was measured at 595 nm. The quantity of sample protein (mg/ml) was calculated using the equation: quantity=OD sample/OD standard × standard concentration. Based on the values obtained, the sample protein concentration was adjusted using a lysis buffer. Fifty microliters of the protein (loading quantity) was added to a buffer solution (5X) and boiled for 5 min. The supernatant was separated by 13% sodium dodecyl sulfate-polyacrylamide gel electrophoresis (SDS-PAGE) (Thermo Scientific ABgene; Waltham, MA, USA) using Bio-Rad electrophoresis plates (Bio-Rad; Hercules, CA, USA) at plate conditions of 150 V and 30 mA for 2 h. A nitrocellulose membrane was equilibrated in blotting buffer for 10 min and then glued onto the negative pole and the membrane of the positive pole. The membrane was subjected to 120 mA of wetting for 1.5 h, and subsequently washed once with Tryptone-Buffered Saline and Tween-20 (TBST). The sample was sealed with TBST containing 5% bovine serum albumin (BSA) and agitated vigorously in a shaker at room temperature for 1 h. The membrane was removed and washed thrice with TBST for 5 min. IGF-1 (Abcam; Cambridge, UK)/β-actin (Santa Cruz Biotechnology; Santa Cruz, CA, USA) primary antibodies (1:400) were added to the membrane, agitated at room temperature for 1 h, and incubated overnight at 4°C. The membrane was incubated with secondary alkaline phosphatase IGF-1/β-actin antibodies (ZSGB-BIO; Beijing; China) (1:1000) for 1 h at room temperature. The membrane was subsequently washed thrice with TBST for 5 min. According to the size of the membrane, equal sample volumes from solutions A and B of the Enhanced Chemiluminescence (ECL) reagent kit (Beyotime-BIO; Shanghai, China) were mixed evenly. The membrane was transferred to a dark room, placed on a plastic wrap membrane, mixed with the blended ECL solution, and allowed to rest for 3 min to allow for ample contact between the membrane and the solution. The membrane was subsequently removed and the redundant solution absorbed; the membrane was then wrapped in another plastic wrap membrane. All bubbles and folds were smoothed out with a glass rod; the membrane was then placed in the dark with an X-ray film fixed on top of it. The time of exposure was estimated according to the brightness of the protein bands. The film was placed into a processing machine to develop the images, then the film was scanned using the FluorChem V 2.0 Gel Imaging Analysis Software (ProteinSimple; San Jose, CA, USA); the gray value of each protein electrophoresis band was analysed and recorded for quantitative analysis.

The data were processed and analysed using the SPSS 20.0 statistical software (IBM; Armonk, NY, USA). All values are presented as the mean ± standard deviation. The mean in each group was then compared by single-factor analysis of variance; comparison between two groups was made with the LSD method, and all comparisons within groups were made with paired t-tests. Differences of P<0.05 were considered statistically significant.

Table 1. Weight and thyroid function changes in the three groups. 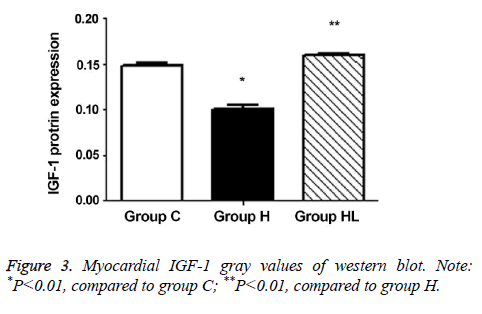 Recent research using immunohistochemistry, reverse transcription (RT)-PCR, and in situ hybridization has demonstrated that human thyroid cells produce the IGF-1 protein. IGF-1 is known to reinforce iodide symporter activity in the cellular membrane, which assists in the intake, transfer, and organization of iodide, and further promotes the release and combination of TH in thyroid cells [28]. Miell et al. [29] studied the conditions of withdrawal and retreatment during thyroid hormone therapy, which was applied following total thyroidectomy due to a thyroid tumor. Analysis of the data obtained in their study demonstrated that the level of blood circulation positively affected thyroid hormone conditions. Harkawa et al. [30] measured the IGF-1 mRNA level in rats affected by hypothyroidism to determine the effect of thyroid hormone on IGF-1. The results revealed that T4 treatment led to a reduction in the IGF-1 mRNA level, as well as normalization of hypothyroidism in the rat liver after 2 w, which indicated that the thyroid hormones affected the expression of liver IGF-1 mRNA. This study obtained similar results; there was no significant difference in the IGF-1 mRNA expression level among the three groups. However, IGF-1 protein expression decreased significantly in group H, while myocardial IGF-1 mRNA and protein expression did not differ significantly between group C and group HL. Therefore, it can be assumed that the thyroid hormones affect IGF-1 expression by adjusting the level of post-transcription within the rat myocardium.

In addition to the above-mentioned effects, TH is known to affect other micro processes. TH mainly plays a role at the nuclear level: the TR nuclear receptor interacts with TH in the cell nucleus, which in turn interacts with the specific target gene of the TH Thyroxine Reaction Element (TRE) as a single form, homodimer, or heterodimer (TRE, located upstream of the start point of transcription, initiates specific TH transcription of the response gene). This facilitates the THmediated promotion of the transcription of target genes. In addition, the mRNA level of transcription is altered; that is, target gene expression is altered at the transcriptional level. The experiments conducted by Dong et al. [9] indicated significant differences between the expression levels of the two miR-206 target genes, demonstrating that TH controls the expression of some genes by adjusting the miRNA. Although miR-206 is only expressed in muscular tissues under physiological conditions, it has been known to be expressed in non-muscle tissues under some specific physiological conditions. In this study, there was an increase in myocardial miR-206 expression in group H rats. However, this was significantly reduced after L-T4 treatment, to almost the same level as that seen in group C. Therefore, miR-206 expression in the myocardium of hypothyroidism rat models was controlled by TH, and showed an increase when the myocardial functions were damaged. In addition, miRBase analysis (http//microrna.sanger.ac.uk) revealed that IGF-1 was a potential target of miR-206. miRNA is known to control gene expression via mRNA, post-transcription. In other words, miRNA is thought to affect expression at the protein level; the results of the present study reinforce this hypothesis. That is, there were no significant differences in IGF-1 mRNA expression in the myocardium of the hypothyroidism rat models compared to that of the normal control group. However, IGF-1 protein levels showed a significant decrease, with the miR-206 effectively restraining IGF-1 activity. Thus, TH appears to adjust IGF-1 expression via miR-206 activity.

The study was supported by The Natural Science Foundation of Liaoning Province (Grant No. 2013023023) and The Dalian Science and Technology Project (Grant No. 2010E15SF171).