2Department of Biology, Faculty of Sciences, University of Brawijaya

4Department of Chemistry, Faculty of Sciences, University of Brawijaya

The increasing level of serum pancreatic enzyme indicates an inflammation of exocrine pancreas, known as pancreatitis. One of the pancreatic enzymes that evaluated in pancreatitis is lipase. The aim of the study was to evaluate the correlation of increasing level of serum lipase with duration of disease and progression of diabetes in Indonesian T2D subject. Subjects were categorized according to ADA 2013 into three groups: healthy controls (n=21), prediabetes (n=12), and diabetes (n=34). The data were analyzed statistically and expressed as mean ± SD. Multivariate analysis of variance was used for showing the differences of the variables. Multiple regressions were applied for correlation studies of the variables and it was continued with Structure Equation Modelling-Generalized Structure Component Analysis (SEM-GCSA) for evaluating the coefficient contribution of each variable in Hypothetic Model. The results showed there were elevated levels of blood glucose, insulin resistance, creatinine, and serum lipase activity in T2D. The increased serum lipase activities were positively correlated with duration of diseases, plasma glucose, HbA1c level, Insulin Resistance Index, and creatinine level, but did not correlate with lipid profile (Cholesterol, Triglyceride, HDL and LDL), and insulin level in Indonesian T2D Patients. Hypothetic structural model showed that decreasing level of insulin contributed to increase insulin resistance, likewise, insulin resistance contributed positively to glucose level, and glucose level contributed to increase HbA1c level and also lipase activity, but the increasing activity of lipase was not contributed significantly to increase glucose level. So, the high serum lipase has correlation with progression of T2D

Diabetes Mellitus is a common and serious disease with a chronic complication, such as kidney failure, blindness and cardiovascular disease [1,2]. The prevalence of Diabetes Mellitus is increasing rapidly worldwide [3]. The vast majority of cases of diabetes is Type 2 diabetes (T2D). The main pathophysiological feature of T2D is impaired insulin secretion and insulin resistance, so it is characterized by hyperglycaemia condition [3-5]. There are multiple defects in insulin secretion and signalling in T2D, which may affect the enzyme synthesis and release from pancreatic exocrine [6]. One of the enzymes which primarily produced in pancreas is lipase. Lipase (triacylglycerol acyl-hydrolase) catalyze the ester bonds hydrolysis on the glycerol backbone of the lipid substrate. Pancreas is the primary source of serum lipase. Increased activities of serum lipase have also been associated with pancreatitis, pancreatic duct obstruction, pancreatic cancer, kidney disease, and other pancreatic disease [7,8].

Pancreatitis is defined as an inflammatory process of the pancreas which may result fibrotic injury in irreversible parenchymal damage [9]. Pancreatitis is classified as Type 3c Diabetes, according to American Diabetes Association 2013 [5]. It is not easy to diagnose patient with pancreatitis or patient with Type 3c correctly. Prevalence of pancreatitis has been increasing rapidly in Western country and also in Asian [9,10]. The incidence and etiology of pancreatitis vary in different country. Al though the most common etiology of pancreatitis is alcohol abuse, some research showed that consumption of healthcare resources, and using anti-diabetic therapies can increase the risk factor of pancreatitis [11-13]. Longstanding Type 2 Diabetes Mellitus (T2D) is associated with exocrine pancreatic failure and patient with T2D is at higher risk for developing acute or chronic pancreatitis. Otherwise, longstanding T2D and poor glycemic control are the major risk factors of Diabetic complication, such as retinopathy, nephropathy, neuropathy, and so on [9], [14]. Our recent study has demonstrated the elevated serum pancreatic enzymes (amylase and or lipase) activity that indicated an increased incidence of pancreatitis in Indonesian T2D patients compared with normal and prediabetes subjects [15]. Abnormally high levels of serum lipase activity can be compounded in disease other than pancreatitis, such as kidney disease, hyperglycaemia, and ketoacidosis [7,8,12]. Although incidence of pancreatitis was found in Indonesian T2D, the pathogenic mechanism is still unclear. This study was conducted to elucidate a possible correlation between insulin resistance and the pancreatic exocrine inflammation in Indonesian T2D subject and also evaluate the correlation of increasing level of serum lipase with progression of the disease.

The study was approved by the institutional Human Ethics Committee of School Medicine, Brawijaya University (No. 393/EC/KEPK-S3/12/2012) and Informed Consents were obtained from all participants. This study included 67 subjects came from outpatient and also patients who were attending to the Saiful Anwar Hospital and agreed to participate in this study as a volunteer. All participants were fully informed about the study and their voluntary informed consents were taken. Inclusion criteria for participants aged > 40 years old, males and females with Type 2 Diabetes Mellitus (T2D) with or without complication, and also non diabetic healthy individual as control, according to American Diabetes Association (ADA) 2013.

The diagnostic criteria of normal or healthy control, prediabetes, and diabetes were assessed according to the American Diabetes Association (ADA) 2013. Subjects with a fasting plasma glucose (FPG) > 126 mg/dl and/or 2 hour plasma glucose level > 200 mg/dl and/or glycosylated Haemoglobin (HbA1c) > 6.5 % were considered to have diabetes; subjects with a FPG 100 to 125 mg/dl (IFG) or 2 hour plasma glucose level 140 to 199 mg/dl (IGT) or HbA1c 5.7 to 6.4% were considered to have increased risk for diabetes (prediabetes); subjects with a FPG < 110 mg/dl or 2 hour plasma glucose level < 140 mg/dl or HbA1c < 5.6 % were regarded as having a normal glucose tolerance (NGT) [5]. Based on ADA criteria, the subjects were categorized into three groups which include: healthy controls (n=21), prediabetes (n=10), and diabetes (n=36). Since diabetes is a multifactorial disorder, lipid profile which include Triglyceride (TG), total cholesterol (CHOL), high density lipoprotein (HDL), low density lipoprotein (LDL) are mostly observed.

Blood tests were carried out after an overnight fast. Venous blood was collected, and then it was centrifuged (at 1500g for 15 minutes). The separated plasma was used to assay the HbA1c. HbA1c was measured with ionexchange high-performance liquid chromatography using an automated analyzer (Bio-Rad D10). The separated plasma was divided into four aliquots. One was designed for immediate assay of glucose and lipid profile which included Triglyceride (TG), total cholesterol (CHOL), high density lipoprotein (HDL), and low density lipoprotein (LDL). The other aliquots were stored at -20°C for subsequent assay for lipase, and insulin.

The results were analyzed statistically using SPSS version 16.0 statistical software. The results were expressed as mean ± SD if the variables were continuous. Multivariate analysis of variance was used for showing the differences of the continuous variables. Multiple regressions were applied for correlation studies of the variables and it was continued with Structure Equation Modeling-Generalized Structure Component Analysis (SEM-GCSA) for evaluating the coefficient contribution of each variable in Hypothetic Model. All statistical tests were two-side and a p < 0.05 were considered to be significant.

Table 1: Characteristics of the study subjects

Lipase is produced mainly by exocrine pancreas with normal value 30-210 U/L. The increasing activity of lipase more than five times may cause inflammation in exocrine pancreas, which is called pancreatitis. In this study, the pancreatitis condition was found in 2 of 12 prediabetes patients and 24 of 34 diabetes patients, so we categorized it in new groups called prediabetes and T2D with increased lipase activity. That group not only show increased lipase activity but also the level of creatinine increased significantly, as shown in Figure 1. The correlation of creatinine and FPG level with lipase activity was analysed using multiple regression analysis. There is positive correlation of creatinine value and FPG value to lipase activity of Indonesian T2D, as shown in Figure 2. Additionally, the increasing activity of lipase has correlation with the duration of diabetes, FPG, HbA1c, Insulin Resistance Index (IRI) and creatinine value. Otherwise, it has no correlation with lipid profile and fasting insulin value, as shown in Table 2. The contribution of glucose, TG, Insulin, HbA1c, IRI, and lipase activity in the hypothetical structural model of T2D pathophysiology were analysed by SEM-GSCA. As shown in the Figure 3, there are four contributions in hypothetical model of lipase enhancement in T2D pathophysiology. 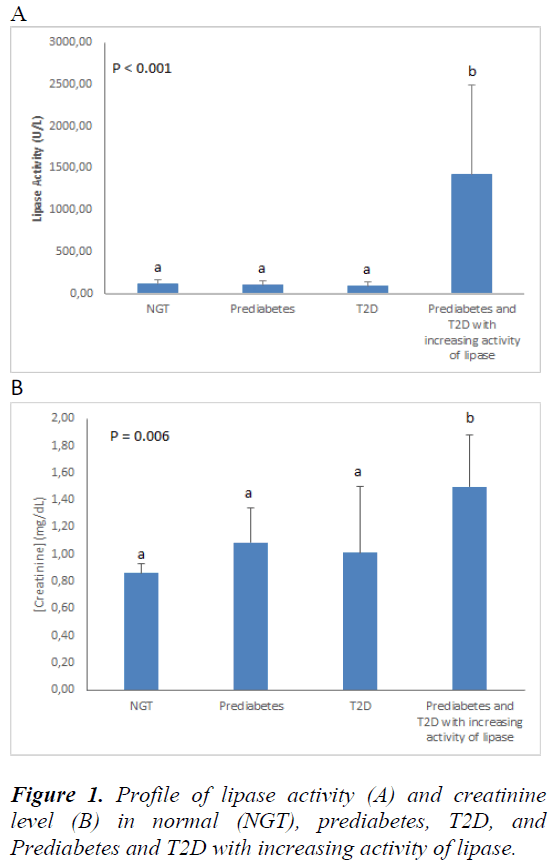 Figure 1: Profile of lipase activity (A) and creatinine level (B) in normal (NGT), prediabetes, T2D, and Prediabetes and T2D with increasing activity of lipase. 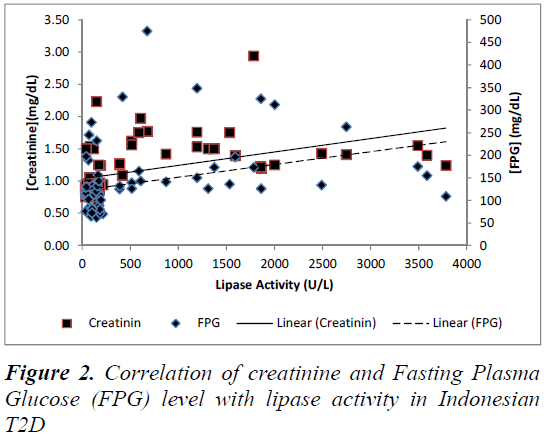 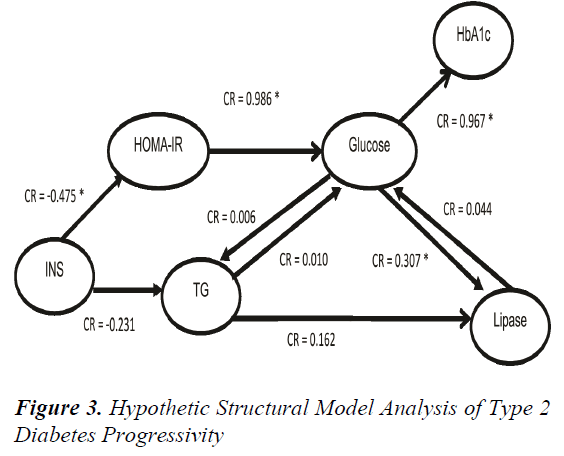 Nevertheless, this study explain the increasing of lipase activity that caused by other factors was not sigificantly contribute to enhance glucose value.

The main pathophysiological feature of T2D are impaired insulin secretion and increased insulin resistance [4]. Insulin resistance is defined as reduced sensitivity of target organ to the insulin biological effects [18]. The insulin resistance quantification can be performed by evaluating the peripheral insulin sensitivity using mathematical formula, such as Homeostasis Model Assessment (HOMA-IR) [19]. Our study showed that the insulin resistance of diabetic groups significantly higher than normal and prediabetes groups. On the contrary, fasting insulin significantly decreased in all of the groups. Insulin resistance has a correlation with the decreasing of fasting insulin value. Because of insulin function keeps maintain the glucose blood homeostasis by facilitating cellular glucose uptake, so the increasing of serum glucose will induce β-cell pancreatic to increase insulin secretion, but unfortunately, pancreatic Langerhan fail to process proinsulin as precursor to be mature insulin [20,21]. This will affects the increasing of blood glucose value. The more FPG value increase, the more HbA1c value increase. It indicates that the increasing of plasma glucose values contribute to bind glucose-haemoglobin more (glycation reaction) and give consequenty to make higher value of glycosylated haemoglobin (HbA1c) [20].

Some researches report that the glycation accour over span of 90-120 red blood cell day life, so that, HbA1c show as average present in the blood glucose during 3-4 months. HbA1c is more comprehensive measure for exposing total glycemic than FPG due to it representation in the blood glucose of postprandial state, in addition to the fasting state [22-24]. This study shows the high value in triglyceride and low value in HDL, this is called dyslipidemia. Dyslipidemia is one of other features that follow diabetes and has a correlation with insulin value. Insulin functions are preventing uncontrolled triglyceride hydrolysis and limiting gluconeogenesis [19,25]. Decreasing level of insulin can cause uncontrolled triglyceride hydrolysis and make the free fatty acid (FFA) level will increase. The key enzyme which is mainly produces by exocrine pancreas and has responsible for hydrolising triglyceride into FFA is called lipase. The increasing of FFA concentration will reduce the inhibiting effect of insulin upon the gluconeogenesis and glycogenolysis, hereby the blood glucose value will rise. The increasing of blood FFA concentration and cellular triglyceride happened mainly in the liver, muscle and pancreatic Langerhans which specify the lipotoxicity of diabetogenic effect. Chronic exposure of abnormal glucose high level over many years and lipotoxicity can lead to toxic effects on β-cell that will defects insulin secretion and worsen insulin resistance [4,26-28].

The high serum lipase activity in diabetes and prediabetes groups can interfere the pancrease exocrine-endocrine interactions. Because of the insulin stimulates enzyme synthesis and release in the exocrine pancreas, the high activity of lipase both in diabetes and prediabetes groups are associated with an impaired insulin action due to insulin resistance and inadequate insulin secretion [29]. The increasing activity of lipase in T2D indicates pancreatic exocrine inflammation, named as Pancreatitis [30]. As showed in the result that the elevation activity of lipase has a correlation with long duration of diabetes, decreasing level of insulin, increasing level of FPG, HbA1c, creatinine, insulin resistance and dyslipidaemia profile (increasing level of total cholesterol, triglyceride, and small dense LDL particles). The hypothetical structural model analysis shows that there is a significant positive correlation between the increasing of glucose level and lipase activity, but not significantly contribute glucose elevation. Thus, we predict that the pancreatitis or the high value of serum lipase has correlateion with glycaemic control impaired or the duration of Indonesian T2D. Uncontrolled glucose levels can stimulate level of triglyceride, and it will stimulate the lipase secretion to degrade triglyceride into free fatty acid [15]. In this study, we found that increasing of lipase activity correlate with plasma creatinine level and also fasting plasma glucose. The increasing of plasma creatinine value indicates a kidney damage or the kidney is not functioning properly. Some studies also showed abnormal high level of serum lipase activity which can be cofounded in glycaemic control impaired correlate with progressive renal impairment maker in T2D [7,8,12,14,31].

The Authors are thankful to DGHE Ministry of Education and Culture RI for supporting this research.