Recent years have seen the advances of a number of automated and semi-automated systems to support physiotherapy and rehabilitation [1]. Automatic rehabilitation is a type of therapy that aims to partially or totally recover the neurocognitive function and motor abilities of a patient. Thus, the affected person needs a perfect machine- controlled recovery system that is easy to operate, can provide the correct result without delay, and is cost effective for the users. As a result, the whole process can help the patients return to their previous stage promptly. Due to the fast advances in medical technology worldwide, rehabilitation systems are currently used by patients after a major operation, chronic pain, sensory loss, stroke, unpredicted pain, severe accident, orthopaedic anarchy, brain injury, Parkinson’s disease (neurological disorder), psychological disorder, and sports-related injury and by older individuals [2,3]. Briefly, the cardiopulmonary, neurological, orthopaedic, paediatric, and integumentary (skin and related organ) systems are the most essential and common areas in the human body that are subjected to rehabilitation treatment [4]. The full recovery process may be accomplished after several days of daily rehabilitation, and the duration of the program depends on the patient’s health [5]. To monitor their progression, end users need vast and deep experiences with the rehabilitation devices that can aid a patient’s quick recovery.

A system for biosignal based device applications contains a biosignal sensor (e.g. biosensor) or multiple biosensors (e.g. multiple biosensors for EEG detection, or multiple biosensors that can each detect different types of biosignals), a biosignal processing unit, the apparatus (hardware), and a software application(s) that operate the biosignal information for different applications [6]. Biosensors are analytical devices that have two components: one is a bioreceptor and the other is a transducer. The bioreceptor is a biomolecule that recognises the target analyte, and the transducer converts the recognition event into a measurable signal [7]. In short, a biosensor converts a biological response into an electrical signal. There are several supported mechanisms that are used to actively monitor the rehabilitation process in real time. Physio logical sensors are one of the fundamental parts of biosignal processing, and are thus important in automatic rehabilitation systems because they offer considerable advantages in the clinical and biomedical industry, such as specificity, small size, faster response, and low cost [8].

Until now, several authors have discussed, developed and reviewed rehabilitation systems with different procedures. For example, Silvia et al., studied a novel mechatronicdependent neurorehabilitation system that can evaluate the post-stroke functional recovery through whole-body isometric force measurements [9]. Majdalawieh et al., explained the relationship between biomedical signals and rehabilitation engineering using EMG, EEG, neural network, wavelet transforms, and Fourier transforms [10]. In other studies, some scholars have reviewed home-based telerehabilitation systems for stroke patients. These studies focused on a few number of biosensors and applications of these biosensors in physical recovery systems and compared with the results obtained with the different sensors/ applications. Pantelopoulos et al. studied the uses of wearable biosensors for health monitoring systems [11,12]. Katherine et al., reviewed the clinical aspects of robotic assistive technology and human-robot interaction for rehabilitation but did not clearly mention the biosensors used in the study [13]. However, we did not find any previously reported work in which the authors summarised the biosensors, computer, hardware, and software used in various rehabilitation systems and the applicability of the different rehabilitation devises.

This review paper is organised as follows. In the Methods section, details on the overall searching process that was used to obtain the results are discussed, including the different keywords, the online databases, and the time frame. The biosensors, hardware, software, and computer process models that were found in the literature are summarised and presented briefly in the Results section through the use of a table. The Discussion section presents an overall discussion in which the new finding related to the development of new biosensors that may aid recovery systems are presented. The Conclusion section recaps the review paper.

A systematic search of the existing literature was performed using a combination of the keywords “rehabilitation system”, “sensor”, and “computer” to find the related studies published between 2007 and 2012 in the following electronic databases: PubMed, Scopus, and Google Scholar. During the article search, the relevant titles and abstracts were analysed. If the expected criterion was matched, the full text was then reviewed. The inclusion criteria were the following: (1) any rehabilitation and/or assistive system that is assisted by a biosensor and computer, (2) systems developed for the human body, and (3) papers written in English. The exclusion criteria were the following: (1) rehabilitation systems assisted by a robot or other devices (except a computer, PDA, smart phone, mobile etc.), (2) no information on the biosensor/ biosignal, and (3) not a real-time system for monitoring the signals.

The three electronic databases contained 2,140 articles with the keywords “rehabilitation system”, “sensor” and “computer”. After the articles from the three databases were collected, all of the duplicate articles were removed to obtain 1,200 articles. All of the articles were then filtered to determine whether the systems are automatic, real-time, and assisted by a computer and biosensor, which resulted in a total of 165 articles. Then, 129 articles were rejected because these did not fulfil the review criteria. As a result, 36 articles went used in the analysis. 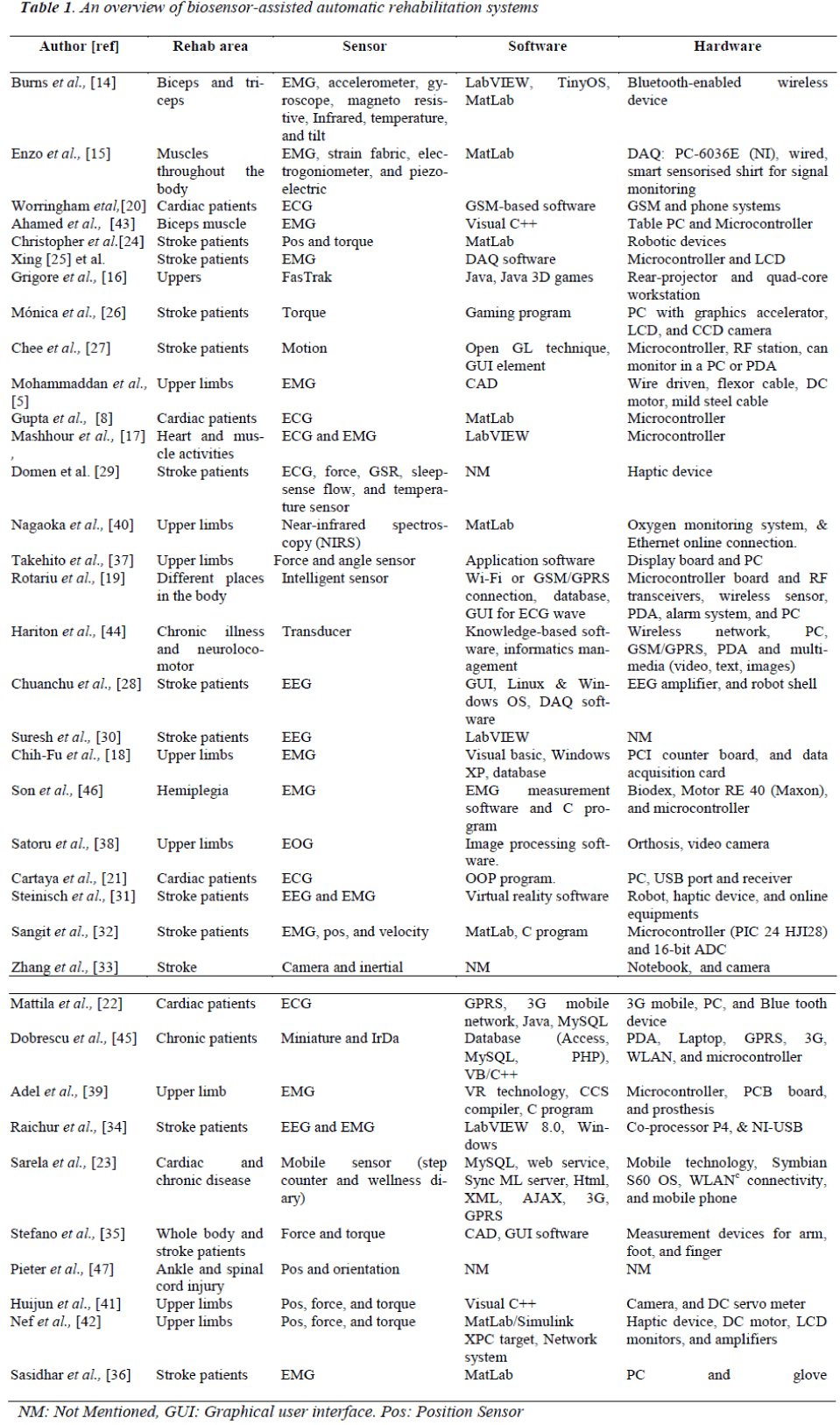 The wide range of study designs included and reflected in this review paper incorporated various types of biosensors. Researchers mainly used electromechanical, electrical, optical, and thermal biosensors, acoustic signal transducers, or mass-sensitive biosensors to develop rehabilitation systems. In this systematic review, a total of 54 types of biosensors were used for rehabilitation systems; these are itemised in Table 1. Some of the most commonly used biosensors that were applied in rehabilitation systems are electromyography (EMG), galvanic skin response (GSR) Electrocardiography (ECG), electroencephalography (EEG), grip sensors, inertial measurement units, orientation, and torque. In addition, most of the developed systems used EMG for musculoskeletal rehabilitation. However, all the biosensors and their applications are listed in Table 1. Figure 1 represents a graphical view of the EEG signal recording of a child brain. 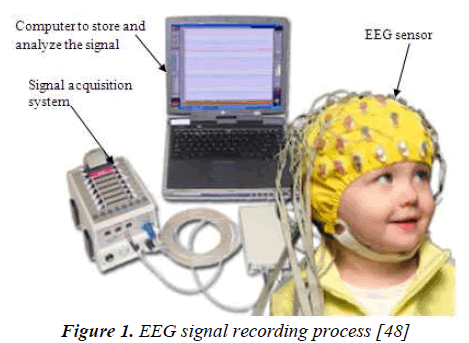 Both wireless and wired systems were preferred for signal recording.

Assistive technology devices and accurate rehabilitation systems for individuals with motor disabilities caused by the aging process or stroke need a good human-friendly actuator that is compact and environmentally beneficial [49]. The review attempted to answer the following question: “which sensors are used in combination with various software programs, hardware, and other supporting methods to develop an automated rehabilitation system for an impaired human body?” This review attempted to gather the maximum number of software, hardware, sensors, algorithm, prototype, and framework options that are used in rehabilitation systems. Additionally, some restrictions in the rehabilitation mechanism were found. The key finding of this study are the following: 1) a total of 36 articles were reviewed, 2) 54 different types of biosensors have been used in recovery systems, 3) of all of the sensors, EMG and ECG were used more frequently for rehabilitation system development (Table 1), 4) the applicable areas of rehabilitation systems are the brain, heart, ankle, shoulder, finger, biceps, triceps, stroke, cardiac, post stroke, stress, eye, whole body monitor, chronic pain, and older individual (most of the systems were developed for the rehabilitation of the upper limb and stroke and cardiac patients), 5) subjects prefer to feel comfortable with noninvasive electrode placement than needle-based systems, 6) all of the rehabilitation systems provided assistance with a desktop computer or personal digital assistance (PDA), 7) modularity, portability, cost, compactness, and user friendliness are the main concerns of rehabilitation systems, and 8) a number of hardware and software are used to engineer real-time and online systems, e.g., different programming languages, such as C, Visual C++, Java, MatLab, LabVIEW, and web programming tools, microcontroller chips, operating systems, DAQ techniques, application of databases, 3-D models, web technologies, different PDA systems, and client-server database technologies.

The authors of this brief review are confident that recommendations should be based on strong and clear evidence. A powerful level of proof, which is based on reliable findings from a number of high-quality studies, is required, as described in this goal. Thus, based on the evidence, we make the following recommendations, 1) to date, some parts of the body have not been targeted for biosensor-assisted rehabilitation systems because these are out of the sight of the human body, e.g., inner muscles of the human body, muscle tendon area, abdomen, and pre- and post-pregnancy, 2) the advantages in the development of rehabilitation systems have been presented to facilitate future researchers on this endeavour, 3) the existing software and hardware technologies discussed are useful if combined to build a proposed computerised rehabilitation mechanism, and 4) feedback in real time is also important because a physically inactive person (and the therapist) expect clear and live data without delay, and 6) the aim of brief reviews should be to guide rehabilitation researchers toward the most effective and latest techniques. Moreover, this paper suggests that the following issues should be taken into account during the developing of a biosensor-assisted automatic rehabilitation system; first and foremost: online process, non-invasive sensor, affordable cost, various automated signal processing moralisations, not cumbersome, and interactive GUI. Secondary: Portable, i.e., small size, weight and space. There are a number of important limitations to this review. We do not include the robot supported rehabilitations systems or systems without any sensors. Consequently, the present review is unable to explore the availability of the the existing systems on the market (i.e. commercialized rehabilitation systems).

This reviews uncovered 36 papers that matched the defined search criteria: rehabilitation systems with various sensors, software, and hardware. The review also highlights that inexpensive, real-time, non-invasive, effective, easy-to-use, and portable systems are preferred by the end user. The authors of this review hope that this paper provides researchers a good understanding of biosensorassisted rehabilitation systems and their analysis procedures. This knowledge will assist them in the development of more powerful, flexible, real-time, and wellorganised applications related to recovery systems.