Objective: To explore the expression of microRNA-489 (miR-489) in osteosarcoma, so as to figure out the role and mechanism involved in proliferation and invasion control of osteosarcoma cells for miR-489.

Methods: By comparison miR-489 expression levels in osteosarcoma and normal colonic tissues, or in osteosarcoma cell lines with different metastasis potency by qRT-PCR. In SW480 cell stably overexpressing miR-489 by transfection of miR-489 mimics, proliferation was assessed by MTT(3-(4,5- dimethyl-2-thiazolyl)-2,5-diphenyl-2-H-tetrazolium bromide), and the cell cycle and apoptosis of SW480 was assayed by FACS(fluorescence activated cell sorting). We predicted SOX4 as the specific target gene of miR-489 with the approach of bioinformatics. Then, the protein level of SOX4 in osteosarcoma cells was detected after transfection miR-489 mimics by Western blotting.

Results: The expression level of miR-489 in osteosarcoma tissues was decreased when compared with the matched adjacent non-tumorous colonic tissues. The expression level of miR-489 in HR8348 and HCT116 cells with low metastasis potency were higher than those in HT29 and SW480 cells with high metastasis potency. After transfection with miR-489 mimics for 48 h, the growth speed was significantly inhibited in miR-489 mimic group than those of control group and blank group (P<0.05). Compared with control group, the distribution of cell cycle was not changed but apopotic cells were significantly increased in miR-489-overexpression group (P<0.05). Western blot analytic results confirmed that SOX4 was inhibited in miR-489-transfected cells.

Conclusion: miR-489, acting as an anti-oncogene microRNA, inhibited proliferation and invasion in osteosarcoma. Overexpression of miR-489 could suppress the growth of osteosarcoma cells through induction of cell apoptosis.

Osteosarcoma is one of the most common malignant tumor of digestive tract, the morbidity of which has gradually increased [1]. Despite the continuous advances in the treatment of surgery and chemotherapy, 5 years survival rate of patients with osteosarcoma is still low [2]. At present, the proliferation of osteosarcoma tumor cells is known to have close relationship with occurrence, development and prognosis of osteosarcoma [3]. In recent years, many studies have confirmed that MicroRNAs plays a very important role in the occurrence and development of tumor. MicroRNAs are a small molecule RNA of endogenous non encoding, and participate in the pathological process of many kinds of tumors’ occurrence [4]. Recent studies showed that miR-489 could regulate and become the tumor suppressor gene of a wide variety of tumors [5,6]. In addition, the downregulation of miR-489 in breast cancer cells can eventually affect the prognosis of patients with breast cancer through influencing proliferation of tumor cell [7]. This study made a quantitative analysis of the expression of miR-489 in osteosarcoma tissues and the surrounding normal bone cancer tissues of 30 cases. At the same time, it used the miR-489 overexpressing SW480 clone transfected and constructed by miR-489 to further explore the effects of overexpressed miR-489 on the biological behaviors of osteosarcoma cells, providing a theoretical basis for the treatment of osteosarcoma.

Osteosarcoma specimens come from the inpatients in the department of general surgery in People’s Hospital of Hubei Province from January 2011 to December 2015. After acquiring the fresh specimens of patients who underwent surgical resection, each cancer tissue and adjacent (5 cm away from the cancer margin) of the normal tissue were immediately kept in liquid nitrogen for spare. All cases were proved by histopathology, and 30 cases of osteosarcoma were classified as 14 cases of high differentiation, 10 cases of middle differentiation, and 6 cases of low differentiation as well as 20 cases of lymph node metastasis, 10 cases without lymph node metastasis. HR8348, HCT116, HT29 and SW480 cells were from the Wuhan University archives center for cells.

The SW480 cells in logarithmic growth phase were collected and inoculated in 96 pore plates with 3 × 104 per pore plate. According to the above grouping and methods, transfection was conducted as 5 parallel holes set for each group, transfecting after 24 h, 48 h, 72 h. MTT 20 μl (5 mg/ml) was added to each hole and continuously cultured in the incubator under 37°C, 5% CO2 for 4 h, and culture solution was carefully sucked from holes after centrifugation. Then DMSO 150 μl was poured into each hole with oscillation under protecting form light for 15~20 min. At last, microplate reader was adopted to detected the absorbance value (A490) for each hole at the site of 490 nm.

Collect the cells after 48 h transfection from each group, wash them with PBS for twice, and make centrifugation in 1000 g for 5 min. Discard liquid supernatant, slowly add 75% ethanol after precooling at -20°C, and save it under 4°C. Take the cell suspension with washed by PBS, and discard the supernatant after centrifugation in 2000 g for 5 min. Dye for 30 min with PI dye 1.0 ml , use 488 nm excitation wavelength for sample determination, and 620 nm bandpass filter for PI fluorescence detection. Collect more than 10000 fluorescence signals from each sample, and obtain the percentage of cells in each phase from the total cells number. Repeat 3 times in each group.

Put total protein 40 μg into 10% Polyacrylamide gel for electrophoresis. Transfer the protein to nitrocellulose membrane by semi dry electroblotting, and separately add the first corresponding antibody (1:1000 dilution) for overnight under 4°C after 5% skim milk closing for 40 min. Conduct room temperature balance on the second day for 40 min, respectively add the second antibody labelled by horseradish peroxidase enzyme after washing the membrane, and incubate for 1 h under 37°C. After washing the membrane, add Enhanced Chemiluminescence reagent (ECL), and put the membrane into the X-ray cassette for pressing, developing and fixing. Compare the gray value between the target band and internal reference band with the expression of GAPDH as a reference. 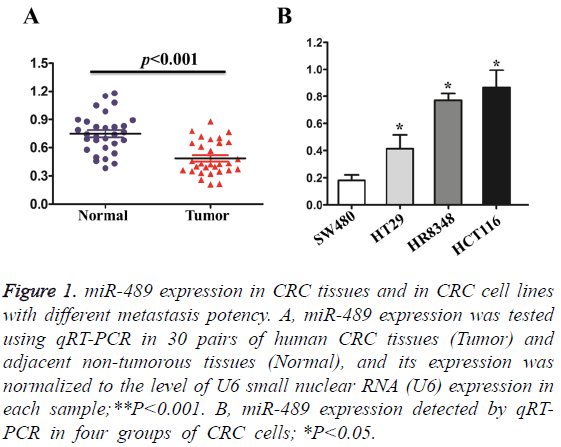 Respectively use negative control agent or treat SW480 cells by miR-489 mimics for 24, 48, 72 h, and measure absorbance value at the site of 490 nm by microplate reader to express the proliferation of SW480 cells. The results showed that compared with non transfection group and negative control group, absorbance value at the site of 490 nm in miR-489 mimics group decreased significantly (P<0.05), which could be seen in Table 1. The experimental results suggest that low expression of miR-489 in osteosarcoma tissue may promote tumor cell proliferation.

The detection by flow cytometry method (FCM) on the effect of miR-489 on cell cycle distribution and apoptosis of osteosarcoma cell line SW480 was detected by FCM results showed that after the transfection of miR-489 mimics for 48 h, there were no statistically significant differences in the number of cells in each phase of cell cycle between the groups (P>0.05). However, it was observed that after overexpression of miR-489, the apoptosis of SW480 cells was promoted, and compared with control group, cell apoptosis rate of miR-489 mimics treatment group was significantly higher with statistically significant differences (P<0.05). The experimental results indicated that overexpression of miR-489 could induce the apoptosis of osteosarcoma cells, which could be seen in Table 2.

The miRNA target gene prediction software (Miranda, Pictar and Targetscan) was used to analyze downstream target genes of miR-489, and it was found that 15 candidate target genes might be combined with miR-489 (Figure 2A). It is shown in Figure 2B the possible combination region of miR-489 and SOX4 gene 3’UTR.Western blot results showed that after the transfection of miR-489 mimics for 48 h, comparing with the control group, the grey level of SOX4 protein band in the miR-489 mimics treatment group decreased significantly, as shown in Figures 2C and 2D. The results suggested that the low expression of miR-489 in osteosarcoma could promote tumor cells’ growth through up-regulating the expression of SOX4 gene. 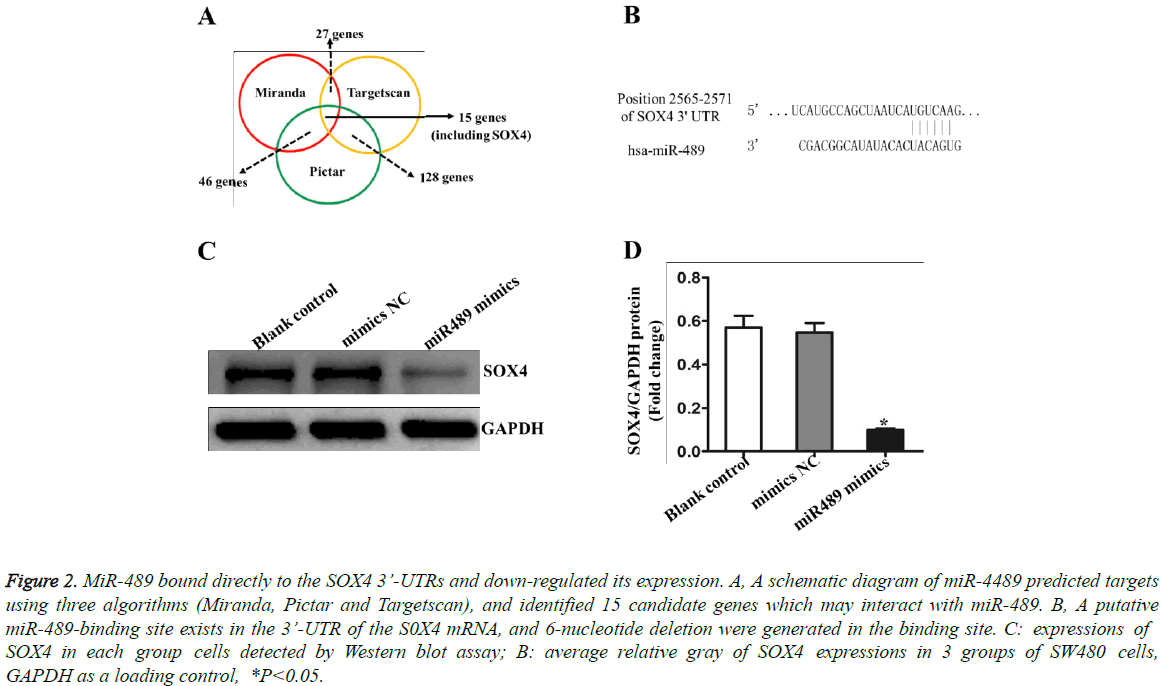 Figure 2: miR-489 bound directly to the SOX4 3’-UTRs and down-regulated its expression. A, A schematic diagram of miR-4489 predicted targets using three algorithms (Miranda, Pictar and Targetscan), and identified 15 candidate genes which may interact with miR-489. B, A putative miR-489-binding site exists in the 3’-UTR of the S0X4 mRNA, and 6-nucleotide deletion were generated in the binding site. C: expressions of SOX4 in each group cells detected by Western blot assay; B: average relative gray of SOX4 expressions in 3 groups of SW480 cells, GAPDH as a loading control, *P<0.05.

The abnormal expression of mircroRNA and up-regulated expression mircroRNA in tumors from a variety of human tumor phases including osteosarcoma, generally have effects of oncogenic genes, and promote the occurrence and development of tumor through negative regulation of tumor suppressor gene or regulation of differentiation and apoptosis channel of tumor cells. However, mircroRNA with the down-regulated expression in tumor tissues usually acts as a tumor suppressor gene, because of its down-regulated expression, the inhibition function of cancer genes is removed, promoting the development of tumors [8]. This topic study showed that the expression amount of miR-489 in osteosarcoma was significantly reduced compared with that of adjacent normal bone tumor tissues. It indicates that miR-489 acts as a tumor suppressor gene in the occurrence and development of osteosarcoma and it is helpful for the early diagnosis of osteosarcoma to detect its expression amount.

As known to all, the function of micoRNA mainly depends on the regulation of the target gene expression. Due to imprecision of the pairing between mircroRNA and target mRNA in mammalian, each mircroRNA can regulate multiple target genes, and multiple mircroRNAs can have a mutual target gene, thus forming a complex regulatory network to precisely regulate the expression of functional genes [9]. Therefore, it is very important for understanding the role of mircroRNA in the occurrence and development of cancer to successfully predict the target genes of mircroRNA. SOX4 gene is an important member of SOX (SRY (sex determining region Y) -box) family, and participates in the regulation of embryonic cells development, decisions of cells’ fate through encoding transcription factor as well as takes part in various types of biological behavior from tumors [10]. Certain studies showed that the expression of silencing SOX4 gene could lead to decreased expression level of activation factor Bcl-10 of nuclear transcription factor κB in tumor cell, while the stability of apoptosis inhibitor Survivin protein was enhancing, so that tumor apoptosis increased [11]. In addition, in liver cancer cells, SOX4 protein can promote apoptosis of tumor cells through activating the approach of Caspase [12]. In this study, the author used a variety of miRNA target gene prediction software to predict tumor cell regulating factor SOX4 as downstream target gene of miR-489. This topic study found that compared with the control group, the expression amount of SOX4 in overexpression miR-489 of osteosarcoma cells decreased significantly. These results indicated that miR-489 inhibited the growth of tumor cells and induced their apoptosis, which was mainly achieved through the down-regulation of SOX4 gene expression.

It has showed a rising trend in the morbidity and mortality of osteosarcoma in recent years, which may be gradual process involved by many factors and accumulated by multiple stages. miR-489 can inhibit the growth of osteosarcoma by regulating the multiple target genes, however, miR-489 still has many unknown target genes to be identified and verified. The interaction between the target genes and the role of miR-489 in the regulation network of cancer inhibition genes remains to be elucidated. Besides, the mechanism of down-regulated expression in miR-489 from osteosarcoma tissues needs further confirm. It is believed that with in-depth understanding of miR-489, using miR-489 as marker for diagnosis and targets for biological treatment will bring new hope for the diagnosis and treatment of osteosarcoma.