Purpose: This study was carried out to investigate whether Pavlik harness affects motor performance in premature infants with Congenital Dislocation of the Hip (CDH).

Methods: A total of 62 children were enrolled and divided into two groups: CDH group (30 infants with CDH) and control group (32 normal). The motor performance of CDH group infants was evaluated before and after using Pavlik harness, and their scores were compared with scores for controls and American standard scores for premature infants.

Conclusion: Premature infants with congenital dislocation of the hip showed reduction in motor performance after using Pavlik harness, which may mask some anomalous synkinetic movements and affect clinical assessments. These results suggest the need for care when applying Pavlik harness and similar devices for premature infants.

Several methods for evaluating the motor development of preterm infants during the first year of life have been developed, including Alberta Infant Motor Scale (AIMS), Test of Infant Motor Performance (TIMP), and Gesell Developmental Scale (GDS) [7]. Due to the fact that Pavlik harness is usually used for premature infants (aged 2 months) in our hospital, we decided to evaluate changes in their motor performance after using the device. The method chosen was TIMP because it is designed to detect more subtle changes in quality of movement quality in pre-term infants. Such changes are strongest in early infancy (age 4 months or less) [8].

Sixty-two premature infants aged about 2 months were enrolled from July 2014 to January 2016 in Department of Paediatric Surgery, Qilu Children's Hospital of Shandong University of Shan Dong. CDH infants were 30 in number, (CDH group) while 32 infants were without CDH (control group). All infants were free from pneumonia and jaundice, and had no history of hip joint surgery after birth. CDH was diagnosed by Magnetic Resonance Imaging (MRI), excluding fracture of neck of femur [9,10]. Basic information of patients were recorded in advance, including gender, age (in months), weight (in kg), and height (in cm). All the CDH infants were treated with Pavlik harness. The research was approved by the medical ethics committee of our hospital, and all the parents of the infants agreed and signed informed consent forms.

This study employed TIMP (Version V) for the evaluation of motor performance of the CDH before and after using Pavlik harness. In compliance with the requirements and standard of the test, the indoor temperature of evaluation room was kept between 25 and 29°C. All the infants were lightly dressed to facilitate their movement on the supporting plane of the TIMP equipment, and to enhance their observation by doctors. To get reliable results, the evaluation was done during the quiet awakening period and activity awakening period instead of the sleeping or crying period. Two qualified doctors were used for every TIMP evaluation. Video recordings were made for motor performance of these infants at every evaluation period. Doctors discussed the recordings and assigned scores.

The whole process was based on assessment of 42 indices and total original scores ranged from 0 to 142 points. Each index was evaluated in strict compliance with the standards of TIMP.

SPSS 19.0 statistical software was used to analyse the data. Ttest was used for comparison among groups before and after treating with Pavlik harness. p<0.05 was taken as significant difference. 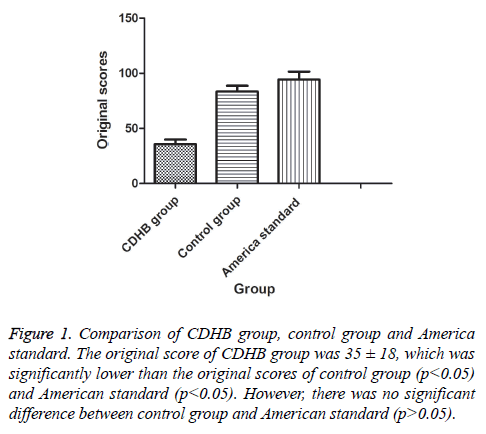 Comparison of CDH group (CDHB) before and after (CDHA) using Pavlik harness, and America standard

All CDH group infants accepted evaluation when they recovered after using the Pavlik harness. Their mean original scores was 21 ± 12 which was significantly different from their original scores as well as American standard scores for premature infants aged 4 months (98 ± 18) (p<0.05). However, the new original scores of control group infants when they were 4 months old was 91 ± 12, which is not significantly different from American standard score (t=1.51, p>0.05) as shown in Figure 2. 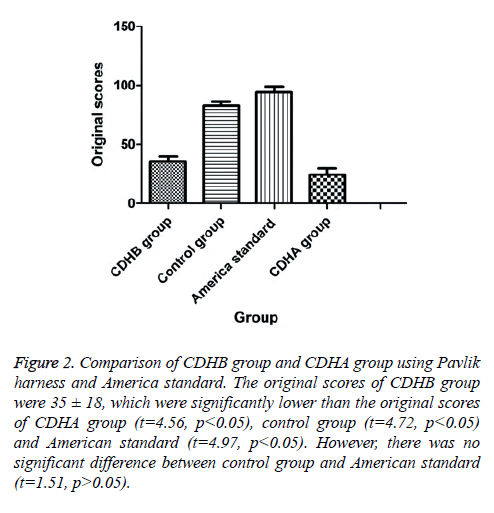 Results of the current study suggest that motor performance of premature infants with CD diminished after using Pavlik harness. This is contrary to what was expected. Previous studies showed that infants with CDH are usually corrected with the use of Pavlik harness when CDH is detected at birth [11]. If the hip is not dislocated at birth, the condition may not be noticed until the child begins walking. At this time, treatment is more complicated, with less predictable results [12].

Pavlik harness is just a kind of fixed method which is always different for infants of different ages [13]. For new-borns, the baby is placed in a Pavlik harness for 1 to 2 months to keep the thighbone in the socket [14]. This special brace is designed to hold the hip in the proper position while allowing free movement of the legs and easy diaper care. The Pavlik harness helps tighten the ligaments around the hip joint, and promotes normal hip socket formation. Treatment for children aged 1 to 6 months is similar to that of the new born: the baby's thighbone is repositioned in the socket using a harness or similar device [13]. This method is usually successful, even with hips that are initially dislocated. It is usually worn full time for at least 6 weeks, and then part time for an additional 6 weeks. For children aged 6 months to 2 years, they are also treated with closed reduction and spice casting. In most cases, skin traction is used for a few weeks prior to repositioning the thighbone. Skin traction prepares the soft tissues around the hip for the change in bone positioning, which may be done at home or in the hospital. Indeed, a harness or similar device is an efficient tool for managing CDH children [15].

Therefore, the disadvantages of Pavlik harness and similar devices for premature infants should be carefully considered because they may affect the motor performance of these infants thereby masking some specific and anomalous synkinetic movements from physicians.

The results of the current study show that Pavlik harness decreases the motor performance of premature infants with congenital dislocation of the hip, which may mask some anomalous synkinetic movements and affect the observation of doctors. Thus, the use of Pavlik harness and similar devices needs to be carefully evaluated. In addition the results suggest that premature infants with CDH may should do moderate exercise every day in order to restore their athletic ability.