Methods: Data from consecutive old patients who underwent cardiac surgery with cardiopulmonary bypass were retrospectively analysed according to the inclusion and exclusion criteria. The primary outcome was AKI within the first postoperative day. Multivariable logistic regression and Receiver’s Operating Characteristic (ROC) curves were used to explore the association between RDW and AKI among old patients after cardiac surgery.

Conclusion: RDW is a novel risk predictive factor of AKI after cardiac surgery in old Chinese patients. Physicians should consider the possible occurrence of AKI and apply a pre-emptive therapy for these patients.

Acute Kidney Injury (AKI) is a rapid kidney function deterioration that occurs within 7 days [1,2]. AKI is characterized by detained nitrogenous waste and (or) urine output reduction. The cause of AKI is prerenal, intrinsic or postrenal. AKI may be caused by some systemic diseases, and the most common is dehydration and sepsis combined with nephrotoxic drugs, especially after surgery or use of contrast agent. AKI is a common complication of cardiac surgery and a challenge in clinic. The incidence rates of AKI after cardiac surgery and after renal replacement therapy are 3%-30% and 1%-5%, respectively, depending on the study population and diagnostic criteria [3-5]. With the medical development, growing attention has been paid to the rising prevalence among old patients in intensive care units. This field of interest in the elderly is warranted by the fact that the number of old population is rapidly growing. The elderly frequently suffer from comorbidities such as chronic heart failure and renal vascular disease, and the therapy of comorbidities may accelerate kidney injury. Along with the ageing population, kidney structure and function are marked by the changes similar to those seen with Chronic Kidney Diseases (CKDs), which is an independent risk factor of AKI [6]. Thus, the old age may be also a risk factor of AKI after cardiac surgery. The prognosis of old AKI patients may be worse compared with the young. A study enrolling 1056 patients with cardiac surgery showed with the increase one-year-old, the risks of postoperative AKI and hospital morality increased by 1.35 and 1.32 times, respectively [7]. AKI is an important challenge and heavy burden to the society. Epidemic studies reported that the in-hospital stay, morality and costs of AKI patients were all higher compared with non-AKI patients. Even recovery of AKI was associated with CKDs, End-Stage Renal Disease (ESRD) and cardiac disease [8]. Hence, early diagnosis of AKI after cardiac surgery is of great importance, as AKI could also be a risk factor of adverse cardiovascular outcomes in the future.

Red-blood-cell Distribution Width (RDW) is a part of a standard completion and available from routine blood examination [9]. RDW is associated with cardiovascular outcomes [10]. RDW could predict the renal injury in some setting populations [11]. RDW is an independent predictor of mortality in AKI patients after continuous renal replacement therapy [12]. Considering the above evidences, we conducted this retrospective cohort study to explore the association between RDW and AKI among old patients after cardiac surgery.

With a retrospective design, we enrolled patients from the Department of Critical Care Medicine of our hospital between November 2013 and March 2015. Patients receiving cardiac surgery (age ≥ 60 years old) were considered as potential candidates. This study was reviewed and approved by the Ethics and Research Committee at the First Hospital of Changsha. This study was not involved in any intervention or protected health information. 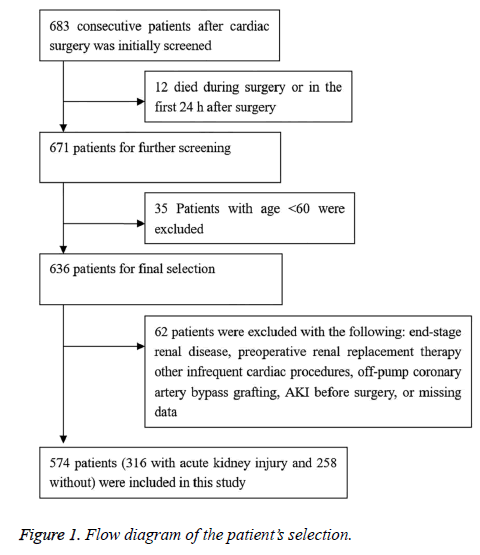 The study population was divided into an AKI group and a non-AKI group, and the indices were compared between groups. Continuous variables obeying normal distribution were expressed mean ± standard deviation and otherwise were shown as quartiles. Category variables were expressed as percentages. Continuous variables and category variables were examined by t-student test and χ2 test, respectively, if appropriate. RDW was separated into four quartiles. The association between RDW and AKI after cardiac surgery among old patients was explored via multi-variable logistic regression by controlling some potential factors. Diagnostic collinearity within variables was performed before the logistic regression. Eigenvalue close to 0 or condition index ≥ 30 indicated the existence of multi-collinearity. The relationship between RDW and AKI was shown by risk ration (OR) with 95% Confidence Interval (CI) and predicted by Receiver Operating Characteristics (ROC) curves. All statistical analyses were conducted on SPSS 19.0 (SPSS Inc. Chicago, Illinois, USA), with the significant level at P<0.05.

The AKI patients have significantly larger RDW compared with non-AKI patients (14.7 ± 0.9 vs. 13.4 ± 0.6, P<0.001), lower red blood cell count and lower haemoglobin level. There are also significant between-group differences in triglyceride, serum creatinine, uric acid, eGFR, and sex ratio, but not in high-density lipoprotein, low-density lipoprotein, total cholesterol, aspartate aminotransferase or alanine aminotransferase. Besides, the AKI group has significantly longer cardiopulmonary bypass and aortic cross-clamping time (P<0.001), and more frequent use of diuretics, lipid-lowering agents and ACEI/ARB than the non-AKI group. The use rate of Digoxin is higher in the AKI group versus the non-AKI group, though not significantly (P=0.085). The results are shown in Table 1.

Table 1: Clinical characteristics of elder patients with and without AKI after cardiac surgery.

Results show that there is no obvious multi-collinearity between variables. The eigenvalues (all close to 0) and condition index (max=18) are in reasonable ranges. In the multiple logistic regressions, the occurrence of AKI was treated as the dependent variable and the quartiles of RDW (25th, 50th, and 75th) as the independent variables after some potential factors were controlled. Results show the second quartile is not associated with the risk of AKI after cardiac surgery (OR=1.05, 95% CI: 0.72-1.53) compared with the lowest quartile. However, the patients with the third or fourth quartile of RDW have higher risk of AKI after cardiac surgery. Patients with the fourth quartile have higher risk than those with the third quartile (OR=2.03 vs. 1.90; 95% CI: 1.66-4.86 vs. 1.27-.83). Male gender, hypertension, high uric acid level, baseline eGFR<60 ml/min and cardiopulmonary bypass>120 min are all associated with the occurrence of postoperative AKI. The uses of diuretics and ACEI/ARB are both protective factors of AKI. The results of other potential risk factors are shown in Table 2. We also performed ROC to explore the predictive effects of RDW on postoperative AKI. The area under the ROC curve is 0.766 with a cut-off value of 13.9. The RDW predicted the occurrence of postoperative AKI among old patients with sensitivity of 69.4% and specificity of 68.6%. The results are shown in Figure 2. 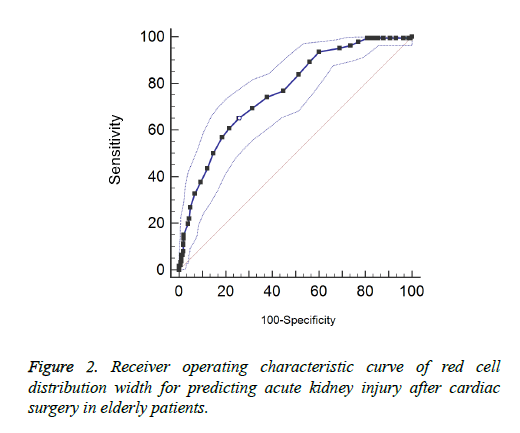 The present retrospective study shows that the AKI patients after cardiac surgery have significantly higher RDW than the non-AKI patients. High RDW is associated with the occurrence of AKI after cardiac surgery in old patients. These data are slightly larger than those in other populations. As reported, RDW is related to early renal function damage in hypertensive patients [11,16]. With a value of 12.8, the results need to be further studied due to the normal range of this cut-off. As reported, RDW>14.5 predicts left ventricle geometric patterns with sensitivity of 81% and specificity of 59% in untreated hypertensive patients [17]. Another study suggests that RDW is also associated with renal function injury in diabetes mellitus patients. The cut-off value of RDW still falls into a normal range [18]. All these three studies are cross-sectional design and one of them involves a small sample size.

AKI is an independent predictor of death, and even a small increase in serum creatinine level is associated with prolonged hospitalization and higher mortality. With higher severity of AKI, the risks of CKDs, ESRD and death are aggravated accordingly. As estimated, the risk of mortality increases by 2 to 5 folds when the plasma creatinine level rises more than 2- fold from baseline [18,19]. Identifying high-risk patients with kidney dysfunction is an important objective in clinic, prior to significant changes of serum creatinine levels. The most widely-used diagnostic system for Cardiac Surgery-Associated AKI (CSA-AKI) is based on the plasma creatinine level. However, plasma creatinine is not a direct indicator of kidney injury and its change can only be detected after about half loss of kidney function, so this creatinine-based diagnostic system often delays the diagnosis and therapy [20]. However, the use of new biomarkers for early AKI detection is limited in evaluation of kidney injury severity and prediction of prognosis. RDW, an easy and inexpensive index, could be a new biomarker involved in the etiology of CAS-AKI and responds earlier to severe kidney injury.

The relationship between RDW and AKI after surgery might be explained by the inflammatory response. As reported, RDW is positively associated with the inflammatory markers, such as hs-CRP level [21]. Another study from community- dwelling women with two-year follow-up shows that serum selenium could adjust the RDW level through interleukin-6 [22]. Inflammatory response is an early-stage trigger of kidney injury in many population settings [23]. The mild elevation of serum creatinine level could activate the rennin-angiotensin-aldosterone system, followed by the launch of inflammatory response. The latter could promote the proliferation of vascular endothelial cells, which reduces the blood flow volume of kidney medulla [24]. Oxidative stress could be the other reason of the cause and effect. There are diverse RDW-associated antioxidants. Oxidative stress is pivotal in the pathogenesis of kidney injury through some important inflammatory response factors. As reported, oxidative stress could shorten the lifespan of red blood cells and improve their haemolysis [25]. The two reasons above also explain the connection between kidney injury and adverse cardiovascular outcomes. Another possible explanation is the malnutrition status. It is acknowledged that malnutrition could affect the clinical outcomes of AKI patients [26]. Malnutrition was found associated with elevated RDW. Some malnutrition markers such as cholesterol could affect the mortality and are strongly related to the elevated RDW. Meanwhile, RDW is significantly associated with the white blood cell count, which is a routine examination of inflammatory response. These reports highlight the importance of malnutrition among some severe patients and RDW is probably an integrative index of these abnormal conditions.

This study has some limitations. First, this is a single-center retrospective study. The results may have some biases. For instance, patients with renal arterial stenosis before surgery or hypovolemia were not excluded. Second, the patients who had renal insufficiency and lacked pre-admission serum creatinine could not be confirmed to have AKI after admission. There lies the rub and challenge in the present study. Third, if a factor is associated with development of a disease or syndrome, a dose-response relationship may be expected. However, the odd ratios of RDW for the second, third and fourth quartiles versus the first quartile are 1.05, 1.90 and 2.03, respectively, suggesting there is a significant jump between the second and third quartiles. Nevertheless, further study is needed. Finally, the generic background should also be considered in the future.

We found high RDW was a novel risk predictive factor of AKI after cardiac surgery in old Chinese patients. In future clinical practice, physicians should consider the possible occurrence of AKI and apply a pre-emptive therapy for these patients.

We thank the colleagues’ help in data collection in the First Hospital of Changsha.

You Xia, and Dong Chen participated in the design of the study and data collection. Lin Li and You Xia performed the statistical analysis. You Xia and Lin Li conceived of the study and participated in its design as well as coordination. You Xia and Dong Chen helped to write and revise the manuscript. All authors read and approved the final manuscript.