Varicella is an acute infectious disease caused by primary infection with VZV (Figure 1). It has an extremely high infectious rate. Varicella is a common and usually mild disease but it has great importance with regard to general infectious morbidity. The disease manifests as a mild skin rash but complications are possible and more frequent in new-borns, elderly adults, pregnant women and immunocompromised individuals. Although rare, fatal cases also exist and represent 0.01-5.4% of hospitalized varicella patients in Europe [1]. This disease is more likely to be seen in pre-school children, where the morbidity is over 95% [2,3]. Varicella is a childhood infection and it spreads fast through mixing in the younger population groups [4]. 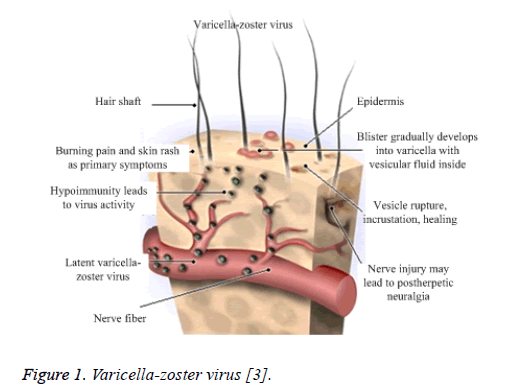 Varicella is mainly found in infants. In clinical practice, the symptoms of the disease include emergence of red maculopapules, herpes and scab in batches on the entire body area. Varicella is a vaccine-preventable disease and the World Health Organization advises routine childhood immunization in countries with a significant public health impact of the disease [5]. Varicella is a self-limiting disease. In most situations, the patient can acquire life-long immunity after being healed, while in few situations, re-infection may occur years later [6]. In winter and spring when varicella is more likely to occur, infected people are extremely infectious through contact or body fluid droplets. Therefore, in a dense crowd, especially in a collective unit such as school, the infectivity of varicella is increased and the outbreak rate will be extremely high [7].

Prepared by VZV train, varicella vaccine is the only effective approach to preventing varicella infection [8]. Inoculation with varicella vaccine not only prevents varicella infection, it can also prevent complications caused by varicella zoster. Related researches have shown that a healthy child, after inoculation with single dosage of varicella vaccine, can reach seroconversion rate of 95% [9]. However some studies pointed out that teenagers and adults do not enjoy significant clinical effects after being inoculated with single dosage of varicella vaccine [10]. In most cases, the patient will show premonitory symptoms such as fever, headache and general malaise after being infected with varicella. Within the next 24 h, they will experience rash, which will be quickly develop into circular blisters ranging in size from rice grain to pea, with flush red around, and umbilication in the middle of blister. These manifestations will seriously disturb the patient's normal life activities, especially for students. Therefore, for those who have been inoculated with single dosage of varicella vaccine, and who live and study in school settings where mingling is high, there is still need to take preventive measures against the disease.

The current study was aimed at investigating the incidence and extent of the disease in people who received a single dose of varicella vaccine, and to further increase the efficiency of preventing varicella. Specific analysis of situations of epidemic varicella was made in 15 schools in a certain city (details below).

The research subjects were 1450 students made up of 821 boys and 629 girls from 15 high schools in a certain city from February 2011 to January 2012. The mean age of all selected students was 19.2 ± 1.3 y. Among them, there were 1377 students comprising 756 boys and 621 girls, who had been inoculated with single dosage of varicella vaccine, 13-60 months earlier (mean period after inoculation was 34.64 ± 6.72 months). This research was approved by the Ethical Committee of the People's Hospital of Zoucheng according to the declaration of Helsinki promulgated in 1964 as amended in 1996; the approval number is 2011003.

Varicella was diagnosed by referring to "Shanghai German Measles, Mumps, Varicella Outbreak". Through observation and judgment of patient's disease condition, it was confirmed whether the patient was infected with varicella or not.

Statistical analysis was carried out on the probability of getting varicella during outbreak period of epidemic varicella in school, and specific symptoms of infection were observed and recorded.

There were 74 cases of varicella infection, 67 of whom had been previously inoculated with a single dosage of varicella vaccine (Experience group). The remaining seven people were the control group.

Measurement data are expressed as mean ± SD, and analysed using t-test. Data on reason for epidemic varicella among people who had been inoculated with single dosage of varicella vaccine were analysed with SPSS19.0 statistic software. Enumeration data was expressed in form of n and %, and tested with Chi-square. P<0.05 was taken as indicative of statistical significance.

Through observation, it was seen that all 74 infected students showed different degrees of symptoms such as fever, exhaustion, and skin rash. However, in terms of disease severity, those who had been inoculated with vaccine had much lighter symptoms than those who had not been inoculated with vaccine. The 67 students with inoculation history suffered slight fever and rash (Figure 2), with average body temperature of 38.84 ± 1.24°C during the illness. The number of skin lesions was less than 50, with a mean value of 38.13 ± 6.43.

One major reason concerns the too-enclosed teaching environments and poorly-ventilated classrooms. These factors resulted in accelerated spread of varicella virus infection during the early spring and late winter. Another factor was poor management on the part of the school teachers. After epidemic varicella outbreak in some classes, the teachers did not pay enough attention to the students, and the examination method used was not scientific enough to make students with slight symptoms to accept timely treatment. Moreover, the students with slight symptoms did not fully recognize the serious infectivity of the virus, and so timely treatment measures were not taken.

The third factor is that analysis of data of the 67 students who had been inoculated with single dosage of varicella vaccine showed that the RR value was only 0.8, which was not enough for effective prevention against epidemic varicella [11]. Moreover, in terms of inoculation time, there were 14 students who were inoculated in the previous 12 months, while the remaining 53 students were inoculated 30-60 months prior to the study. Since the average time interval from being inoculated to being infected with varicella is 3.9 y, there were majority of students whose inoculation history exceeded this timeframe. Therefore, the immunity levels of these students were low.

In order to further enhance prevention of varicella virus and avoid outbreak of epidemic varicella in a large scale, especially in the crowded school environment, it is suggested that schools should strengthen morning checks and implement isolation measures according to national regulation on treatment measure for epidemic varicella outbreak [12,13]. They should enlighten parents on the critical features to look out for during morning checks, and ask parents check their kids every day, so as to reduce the workload and difficulty of conducting the checks in schools [14]. Greater attention should be paid to those who have ever had contact with infected patients. For those students who have been diagnosed with varicella, the school should guide their parents to isolate them at home until the incrustation and the herpes dry up, and also until they are medically certified fit to resume school [15,16]. In addition, medical observation should be implemented in any class where epidemic varicella occurs, and if need be, school activities should be temporarily suspended [17]. Finally, schools should strengthen disinfection and cleaning of public areas such as classrooms and dormitories. During outbreak periods, full ventilation of all classrooms should be maintained [18]. Teachers should embark on publicity and education on prevention of varicella, to create awareness amongst students.