Background: Ocular trauma has a wide variety of presentation. The most common cause of loss of vision after ocular trauma treatment is corneal opacity in the visual axis. The following two cases illustrate medical management of scar and significant improvement in visual acuity after scar management with topical, Loteprednol etabonate ophthalmic suspension 0.5% w/v and Flurbiprofen Sodium ophthalmic solution 0.03%. Case presentation, treatment and interventions: These two young male adults of ocular trauma where after initial treatment, first a case of penetrating injury right eye and the second case of blunt trauma with a vegetative foreign body causing fungal keratitis, have been described. The first case is of a young male presenting with penetrating injury with corneal laceration, he was treated with surgery. The second case is a case of vegetative injury (blunt trauma) and diagnosed as fungal keratitis and treated with antifungals, cycloplegics and antibiotics. After receiving the initial treatment successfully, both cases finally presented with central corneal scar leading to visual impairment. Treatment of central corneal scar: The corneal scar has been treated with topical 0.03%flurbiprofen and 0.5% loteprednol in tapering doses have shown significant improvement of vision as the scar has shown significant thinning. Aim of submitting this case report is to highlight the importance of treatment of corneal scar with a combination of both these drugs. Using this very simple method of treating the cases of central corneal scar a near-complete removal of the scar with good visual recovery could be attained. This is the first time such treatment of corneal scar has been reported using a combination of topical flurbiprofen and loteprednol. Conclusion: The early treatment with the above two easily available topical medication has been beneficial in maintaining the transparency of the cornea. These are just case reports and a more detailed study will be required to establish the utility of such regime in all cases of the central corneal scar.

The corneal scar is one of the common complications after treatment of ocular trauma and if the scaring is in the pupillary or visual axis the impairment of vision is significant and needs treatment. Once the corneal scar is formed it has to be treated surgically for obtaining a clear visual axis. This case report aims at addressing the corneal scar with a conservative approach using topical Ophthalmic suspension 0.5% loteprednol etabonate and Flurbiprofen Sodium solution 0.03% in tapering doses and the visual recovery has been excellent and patients did not have to undergo keratoplasty or any other surgical procedure.

Eighteen years old male undergoing training for armed forces was brought with a history of injury to right eye with cartridge shell during firing practice with a rifle. The patient was brought to the hospital after five hours and the eye was patched by a local doctor. Initial examination showed severe lid oedema, blepharospasm, conjunctival chemosis, cornea showed a linear laceration from one O’clock to six O’clock position. It was a full-thickness laceration with a collapsed anterior chamber. There was no other associated injury of the head and neck.

As the extent of the injury could not be assessed due to severe lid edema and chemosis. After clinical examination and confirming that the patient had no head injury or any other life threatening injury the patient was planned to be taken to operation theatre to explore the wound and further decide the management. Peribulbar anaesthesia was given and a self retaining lid speculum applied. After washing the conjunctival sac with betadine and ensuring that no external foreign body is left, the extent of the injury and any involvement of sclera were assessed. The anterior chamber was entered from the corneal wound and viscoelastic used to form the anterior chamber and protect the endothelium. The anterior chamber was then washed with Simcoe irrigation aspiration cannula.

The intraoperatively anterior chamber was found to be normal and the absence of any foreign body or hyphaema. The pupil was round dilated due to traumatic mydriasis. Anterior chamber reformed with viscoelastic and corneal wound was sutured with 10’0 Ethicon suture. Special care was taken to ensure that suture at the pupillary axis was smaller and those away were bigger. After anterior chamber wash, it was reformed with an air bubble. Postoperatively B scan ultrasonography was done and no intraocular foreign body was found. The post-op period was uneventful and the patient showed gradual recovery. After eight weeks the sutures were removed and the vision was noted to be BCVA 6/18. There was a linear scar a part of it in the papillary axis. The patient was treated with topical 0.5% loteprednol and 0.03% flurbiprofen 6 hourly for 2 weeks.

The corneal scar showed significant improvement. In the next 4 weeks the frequency of topical loteprednol was reduced to 8 hourly, 12 hourly, and once a day and finally stopped. However, the second topical medication, i.e. 0.03% flurbiprofen was continued 6 hourly. At the end of therapy, the patient showed significant improvement and the central cleared of the scar and the patient’s BCVA improved to 6/6 (p). There was no increase in intraocular pressure during the entire course of therapy. The corneal scar was then treated with 0.3% flurbiprofen and 0.5% loteprednol. After six weeks of treatment, the scar became insignificant and recovered to give 6/6(p) vision (Figure 1). 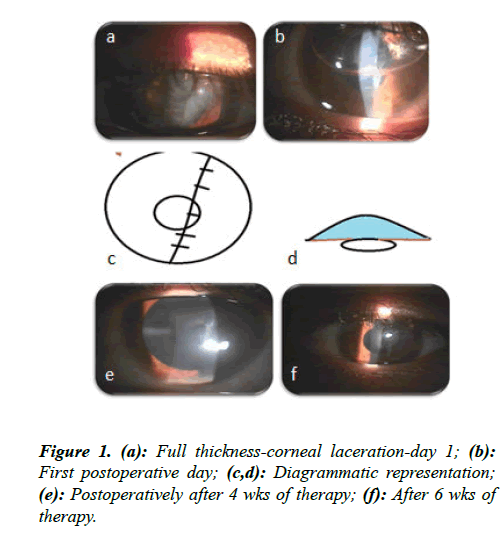 A 25 years old patient presented with a history of injury with an injury with a tree branch and came to eye centre after five days of the injury. In the intermittent period, the patient was treated with topical moxiflox and mydriatics by a general practitioner. Clinical examination showed intrastromal abscess with hypopyon. The corneal and conjunctival swab was sent for KOH mount and fungal culture. The swab was also sent for Gram stain and culture ABST. Though the lab reports did not give a positive report for fungus, based on clinical features of fungal keratitis the patient was treated with topical natamycin, antibiotics, and mydriatics. The patient recovered after 12 wks of therapy with a central scar macula-leucomatous grade scar and vision of 6/60 in the affected right eye. The scar was treated with 0.03% flurbiprofen and 0.5% loteprednol in tapering doses. Six hourly for two weeks followed by eight hourly and twice a day in the next four weeks.

After six wks of topical therapy with loteprednol and flurbiprofen, there was a significant decrease in scar, and the patient ’ s vision improved to 6/6 unaided. Throughout the treatment, the patient’s IOP was monitored and no increase in IOP was noted (Figure 2).

Figure 2: (a): Central corneal scar after heled fungal keratitis; (b): Final outcome after treatment with.

The cornea comprises 1/6th of the anterior part of the eye and is responsible for 2/3 of the Refractive power of the eye. For the cornea to be functional the most important part is Transparency [1]. Ocular trauma involving the cornea often results in scarring and loss of transparency. Any of the layers of the cornea, the epithelium, Bowman’s membrane, trauma, Descemet's membrane, and the endothelium can contribute to this lack of transparency.

The primary functions are- transmission of the incident light, refraction, maintenance of the structure, and protection to intraocular structures from trauma and pathogens [2]. The cornea becomes opaque when the regular arrangement is disrupted. After ocular trauma corneal scar often remains and is the major cause of visual impairment. Each layer of the cornea is important for maintaining corneal transparency. Corneal wound healing is a complex process involving cellular changes and signalling molecules from cells of every layer of the cornea. Immediately after the injury, some of the corneal haze is due to corneal edema. Trauma can cause the release of various inflammatory mediators and the recruitment of neutrophils and macrophages and hence the haze [3].

The transmission and refraction of light through the cornea depends primarily on the transparency of the cornea which in turn is due to the highly specialized ultrastructure. The human cornea is approximately 500-590 microns thick. The stroma is comprised of lamellae of collagen bundles keratocytes lying between, collagen type IV is the main constituent of Descemet's membrane [4]. Collagen fibrils have a diameter of approximately 10 nm-20 nm, while the wavelength of light is 500 nm [5]. Each collagen fibril lies at a fixed distance from the other (20 nm) and makes a lattice pattern [6]. The main bulk of the corneal tissue is due to the stroma. Boote C et al. proposed that the small distance between collagen fibrils relative to the wavelength of light decreased the possibility of scattering regardless of fibril arrangement [6]. After ocular trauma, the corneal epithelium heals by a sequence of three processes: migration, mitosis, and differentiation. The activated keratocytes become fibroblast-like and secrete extracellular matrix components and later these fibroblasts differentiate into myofibroblasts, which have contractile properties.

Thus, the new collagen fibrils are not placed as orderly as the original fibres and hence lose their transparency. Slowly the scar becomes dense and transmission of light is severely impaired. Corneal opacity forms. All layers of the cornea must heal to maintain corneal transparency, but the layer that most crucial to corneal haze in response to injury is the corneal stroma. The opacity can be removed surgically with penetrating or lamellar keratoplasty. This is the first case report of the removal of corneal scar without surgical intervention using medication. Both the cases have shown complete visual recovery without any surgery and with no complications.

Corticosteroids are effective in treating inflammation and immune-related diseases but they have side-effects. Corticosteroids act by suppression of arachidonic acid formation by producing phospholipase A inhibitory proteins called lipocortins. They temporarily block the exudative phase of inflammation and inhibit fibroblast formation in the tissue repair stage. In the acute phase of inflammation, the corticosteroids decrease the permeability of capillaries and the cellular exudation is reduced. In late stages, the formation of granulation tissue is decreased. Loteprednol is a mild steroid, and does not cause many steroid-related ocular complications and doesn’t cause a rise in IOP while preserving the useful anti-inflammatory action. Loteprednol is an ester glucocorticoid with a 17-β chloro-methyl ester group and binds to the glucocorticoid receptor, and the remainder is metabolised to an inactive metabolite. Hence, it produces lesser systemic adverse effects. There are numerous NSAIDs for topical application on the eye which include; Flurbiprofen Diclofenac, Ketorolac, Nepafenac, Bromofenac, and Amfenac [3,7]. The anti-inflammatory action of the NSAIDs is primarily due to the inhibition of the cyclo-oxygenase enzyme (COX-1 and COX-2) and due to a decrease in the biosynthesis proinflammatory factors.

Additional mechanisms like suppressing the leukocyte motility and chemotaxis, inhibiting the inflammatory cytokines and the free radical scavenging activity, may also contribute to their anti-inflammatory action [7-10]. Topical NSAIDs are used for management of anterior segment inflammation and Flurbiprofen ophthalmic solution 0.03% has good corneal penetration and is an effective anti-inflammatory agent. The use of a steroid for treating scars after herpetic keratitis has been known but the combination of topical steroid and nonsteroidal anti-inflammatory agents for scar reduction has never been reported. This is the first time that such a case reports medical management of corneal scar has ever been reported. In the above two case reports it has been seen that treating corneal scar with a mild steroid in tapering doses along with 0.03% flurbiprofen over four to six weeks has resulted in the disappearance of a leucomatous scar. However, further studies with a larger number of cases may be required for assessing the complete utility of this regime.

Visual acuity is impaired due to corneal scar formation in the visual axis as the transparency of the cornea is lost. These two cases where topical loteprednol and flurbiprofen were used in combination helped in the clearance of the scar and restoration of the refractive function of the cornea. This is an attempt to treat a corneal scar using topical medication and has never been described before. The aim of reporting these cases is to show the impact of simple measures to treat the corneal scar after treating ocular trauma and get very good visual potential.

Availability of data and material

Only one author: corresponding author

The author has none to declare. 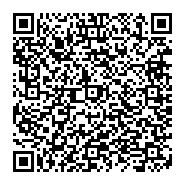