Rapid Prototyping of Polymethyl Methacrylate as Replacement and Support of Spine in Human.

Rapid Prototyping is a process of manufacturing which finds a wide range of applications in the field of mechanical, industrial, aerospace and also in the electronics. Now-a-days due to their ease in the manufacturing of different materials and also the less time required for manufacturing and also some other advantages, they are being used in the field of medical and dentistry. Replacing the spine for humans or using biomaterials for support in the spinal cords is a place where rapid prototyping could be used for the manufacturing of those biomaterials. Spine is the backbone that encloses and also houses the spinal cord and protects them. There are various reasons that causes the fracture in the spine of the humans and this results in serious consequences to the spi-nal cord and also affects the human body from many doing operations. Some of the materials could be used for support in the human spine in case of injury and they can be used to replace the spine in case of some serious fractures and they should possess the properties and the strength to bear the weight and also to withstand the body conditions like temperature, pH level and also should protect the spinal cord effectively with a longer lifePolymethyl methacrylate (PMMA) is a reliable biomaterial that could be used for the replacement and also for support for spine in the humans to withstand the weight and the body conditions and have a longer life. The rapid proto-typing is a reliable method to manufacture the Polymethyl methacrylate (PMMA) to make the model of the human spine into the product. The model of the human spine could be made in some 3D modeling softwares and they can be also analyzed with some suitable software before manu-facturing. The integration between the modeling software and the rapid prototyping machine could be done before the manufacturing and by this method the injuries in the spine could be rec-tified in a cheaper and effective way.

Spineis a vertebral column also known as the spinal col-umn or vertebrae and it plays a major role in the human body as it supports the weight of the upper body and also allows the posture of the body during movements and also flexibility. [2] The most important function of the spine is to protect the spinal cord. The spinal cord forms the Cen-tral Nervous System along with the brain and it starts from the medulla oblongata in the brain and it connects to the peripheral nerves and the most important function that it does is it carries the information from the brain and it transports to the peripheral nerves. If there is damage to any part of the spinal cord in the humans, it may lead to serious effects or also disasters to the humans. [6] Thus, to protect the spinal cord, the spine is provided. The spine consists of tough outer portion and soft and smooth inner portion and they consists of a large amount of calcium in them which give them the strength to support the spinal cord. [1] There are various types of injuries that happen in the spine due to various reasons like accidents and also constant posture for a prolonged period. To replace the fractured or damaged part of the human spine a similar spine could be made with a suitable material which has the strength to hold the weight and also has a good life in the environment of the body and they do not undergo cor-rosion or erosion or any other chemical reactions. Some of the polymers which are extensively used as biomateri-als can also be used in this application; one of these suita-ble materials is Polymethyl Methacrylate (PMMA). The 3D software model of spine can be manufactured easily in less time and cost with Rapid Prototyping process.

The spine inin the human body also known as vertebral column extends from medulla oblongata in the brain to the coccyx. It supports the weight of the upper body and also allows the posture of the body during movements and also flexibility. In an adult body, the vertebral column or spinal column consists of 26 bones. There are various regions in the human vertebrae but the weight bearing region in the vertebra is the body. The transverse process-es are extending out of the body and they are thin col-umns of bone. The spinous process extends in the posteri-or direction from the transverse processes. Vertebral fo-ramen is present between the transverse process, spinous process and the body and it is a hollow space and contains meninges and spinal cord. [10] Thin regions of cartilage are present between the vertebrae and they are called as intervertebral discs. [1] There are five major regions of spine, which are cervical, thoracic, lumbar, sacral and coccygeal. [1] The picture of the human spine is shown in the Fig. 1. 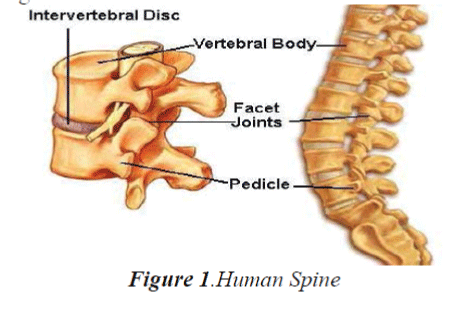 The PolymethylMethacrylate (C5O2H8)n is obtained by the polymerization of an ester called methyl methacrylate. PMMA is light-weighted material that has good mechani-cal properties and can withstand high loading for a pro-longed period. It has good impact strength which is higher than that of polystyrene and glass. Addition of co-monomers like butyl acrylate increases the impact strength. PMMA has a high degree of compatibility with tissue of human and also other animals and also they are less toxic in nature. The PMMA bone cement can be used in the bone implantations and also for remodelling lost bones. PMMA bone cement does not bond to implant or bone but they fill the spaces separating the prosthesis and it prevents the bone motion. The properties of PMMA play a major role in the application an in the ease of man-ufacturing of the product. The properties of PMMA are shown in the Table 1. 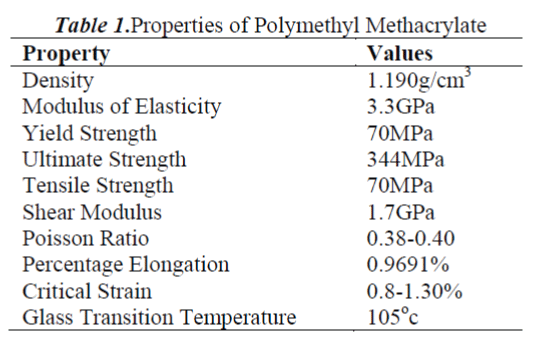 Rapid prototyping is a technique that is used to fabricate a model of a part or an assembly of 3D CAD data. There are various techniques in Rapid Prototyping, but the relia-ble technique for the fabrication of this part is Fused Deposition Modelling (FDM). It is a filament based pro-cess of rapid prototyping which allows building the part by the extrusion of a semi-molten polymer composite. [8] In this a movable nozzle is situated on to a substrate and deposits the thread of molten polymer material. [8] The build material is then heated slightly above its melting point temperature so that it will be able to solidify in a short time after the small extrusion process. [8] The FDM systems posses’ two nozzles, one for part material and the other for support material. The support material is usually made of low quality and they will be removed and then the high quality material will be used. The working of FDM is explained in the Fig 2. 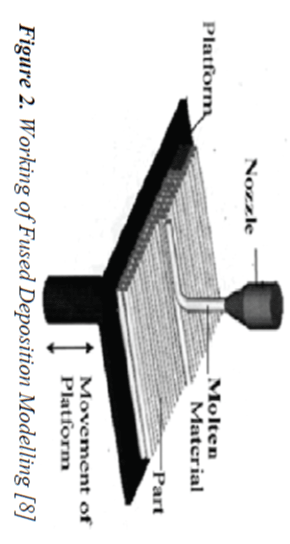 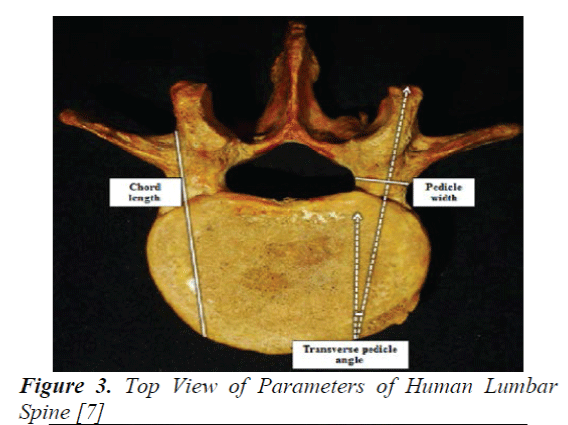 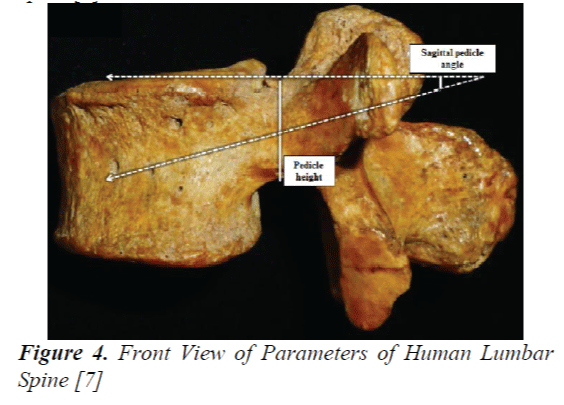 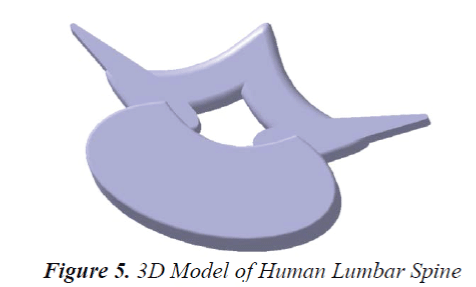 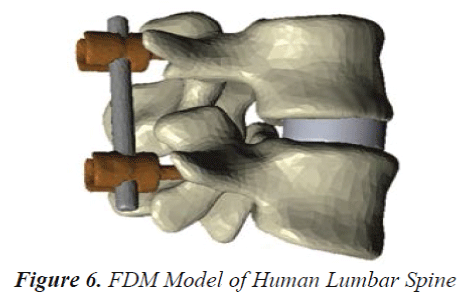 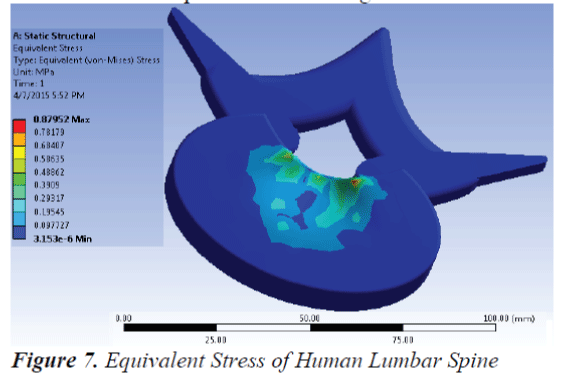 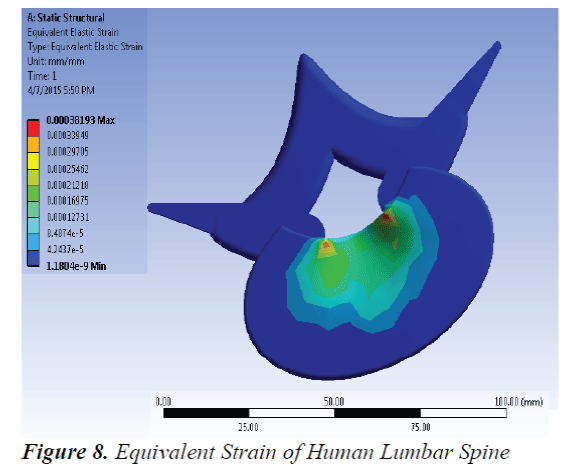 It was found that the human spine could be replaced by a spine made of Polymethyl Methacrylate (PMMA) in case of damage or disintegration to the human spine due to any accidents or disorders, as they can bear the load for a long time that is applied onto them. The PMMA material has a longer life and they are non-toxic in nature and this makes them suitable and reliable for their use in the human body. The PMMA material maintains the homeostasis of the temperature, pH level, etc., in the human body for a long-er period of time. The manufacture of the PMMA human spine can be donewith the FDM machine which is inte-grated to the modelling software. The Fused Deposition Modelling (FDM) process manufactures the product in an easy manner in less time with high accuracy. The pro-duced PMMA spine resists corrosion and erosion and they can be implanted inside the human body by suitable surgeries.