The specific plate which is pre-contoured to the specific bone shape and the fracture type, can promote the bone healing of patients. However, methods of developing plates for specific patients reported in recent studies are almost time-consuming, and little attention has been paid to improve the efficiency of plate development. This paper proposed a novel methodology to develop and optimize the fixation plate rapidly for a femur based on the parameterization and finite element analysis. The proposed method was tested and simulation experimental results indicated that it allowed design users to develop and modify the plate conveniently according to the information of a specific patient.

Femur fractures are the results of high-energy trauma to young patients or low-energy trauma to older population with osteoporosis bone, especially in distal femur, fractures are difficult to treat because of comminuted fracture segments [1]. Plates pre-contoured based on specific femurs can promote the anatomic recovery and achieve fracture healing [2], therefore, the development of patient specified plates has been regarded as a research trend of next generation medical device [3]. In recent two investigations [4,5], theoretical reference and operation reference models were proposed for orthopaedic surgery and fracture fixation assembling. However, little attention has been devoted to consider the develop efficiency.

The goal of this study is to provide a rapid method for the development of plates based on the surface model construction reported in our previous study [7], so that, parametric models of femur plates can be quickly created and modified with a few semantic parameters. Combining with the thought of feature parameterization [8], the main contribution of this paper lies in the development of a rapid method for creating and modifying plate according to the fractured femur of a patient.

The normal femur model of an adult female volunteer whose height was 163 mm, was obtained from CT scans (MSCT, Aquilion 64, Toshiba, Zoetermeer, Netherlands), and the solid femur model was constructed with the cortical and cancellous bones in the medical software package, MIMICS (Materialise Inc., Belgium), then a fracture gap was cut 12 cm above the knee joint to simulate a 33A1-C3 type fracture (AOClassification). To implement the proposed methodology and algorithms, Microsoft Visual C++ and Dassault System CATIA V5 R21 were used as the development platform.

With the consideration of the significance of femur shapes in the plate development, the surfaces of the fractured solid femur were previously extracted to obtain a surface model, as shown in Figure 1, the fractured femur model with fractured evidences (fracture curves) was restored by using the methods in our previous studies [7,9]. 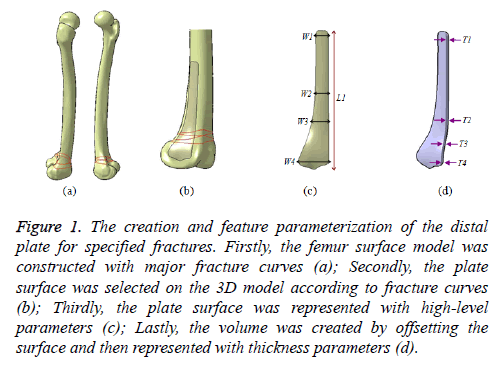 Figure 1: The creation and feature parameterization of the distal plate for specified fractures. Firstly, the femur surface model was constructed with major fracture curves (a); Secondly, the plate surface was selected on the 3D model according to fracture curves (b); Thirdly, the plate surface was represented with high-level parameters (c); Lastly, the volume was created by offsetting the surface and then represented with thickness parameters (d).

Feature parameterization of the plate

The constructed surface model of a fractured femur which can represent major shapes of the detailed femur anatomy and the information of specific fractures, so the plate surface between the bone and the femur was selected from the constructed surface model, and it was extracted with unequal distances to construct the plate volume, then features of the plate were defined and represented with parameterizations (Figure 1). The algorithm for constructing and parameterizing the plate was expounded as follows. Firstly, the closed curve on the lateral surface was created from the orthographic projection of the contour sketch, and the projection curve was selected to cut the surface model to obtain the plate surface. Secondly, the shape of the plate surface was represented with semantic parameters. Thirdly, the attached surface was extruded outwards with nonisometric distances to obtain a volume model of the plate, and volume features of the model were presented with semantic parameters to create the model of the specific plate.

Analysis and modification of the plate

A fracture gap (12 mm) was generated through a Boolean subtract operation to represent a transverse fracture of the distal femur. To conserve computing time, the geometry of the locking screw was simplified to a cylinder (D=6 mm) matching the geometry of the distal femur. The plate/screw and screw/ bone interfaces were all assumed to be bonded. Therefore, the screws were securely fixed to the plate and bone during loading. The entire solid model was imported into a commercial FE package (ANSYS Workbench 14.0) to measure the mechanical stress. All materials were assumed to have linear and isotropic properties in these models, and their values were adopted from the available study [10], 15 Gpa was selected for the Young modulus for the plate and screws, while 16.7 MPa and 155 Mpa were defined as the Young modulus for the cortical and cancellous bone, respectively. 0.3 was defined as the values of Poisson’s ratio for all materials.

For validation purposes, boundary conditions used for the analysis were similar to the axial compression tests. The knee joint of the femur was fixed, restraining rotation and motion in all directions. The total load of 1800 N, around 3 times of the body weight, was applied downwards to the superior node on the head along the direction of the head centre to the knee joint [10]. The maximum von Mises stresses were recorded to calculate the axial bending stiffness of the structure.

By modifying recursively the values of plate parameters, the maximum stress of the plate system can reach a desired value based on FEA to improve its biomechanical performance. 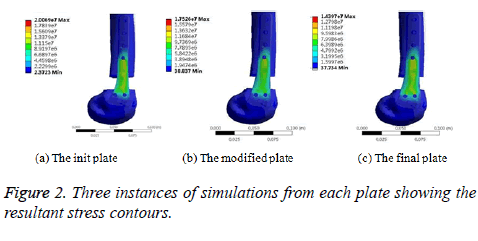 Figure 2: Three instances of simulations from each plate showing the resultant stress contours.

To improve the mechanical strength of the plate, the holes near to the fracture gap were removed to match the fracture type and complex [11]. The anatomic shape and thickness are very important factor in the plate design [3,6], the thickness and the width parameters, especially in the fracture site, have significant meanings in the plate development. How to edit conveniently the shape of the plate is a challenge in the development of specified plates. By adjusting the values of the high-level parameters of origin plates, such as the width, thickness and length, the final optimized plate can be constructed and modified effectively.

In this study, the plate model can be constructed according to the patient’s femur shape and the fracture information. With the feature parameterization of the plate, the plate can be modified and the stress can be reduced effectively. In the first instance, the init plate exhibited significantly lower maximum von Mises' stress (20.067 MPa), and the stresses of the modified and the final plate (17.526 and 14.397 MPa) were all reduced markedly than the one of the init plate.

To avoid processing massive discrete geometric objects and processes in the plate development for distal femur fractures, this paper proposed a mechanism for plate construction, modification and optimization through CAD and CAE technologies. The proposed method simplifies the process of developing plate for distal femurs, and achieves the efficient development of the plate according to the information of a specific patient.

This work was supported by High University Science Research Project of Jiangsu Province under Grant 16KJB520047; Foundation of Changzhou Vocational Institute of Engineering under Grant KJ15303.