Objective: The objective is to explore the clinical efficacy and safety of intermediate frequency ultrasound combined with potent opioid analgesic in treating malignant pancreatic cancer.

Conclusion: Intermediate frequency ultrasound combined with opioid analgesic can effectively alleviate cancerous pain, decrease VEGF and HGF, and inhibit the progress of the cancer in malignant pancreatic cancer patients, which is a safe and effective therapeutic regimen. It is significant in prolonging the survival time of patients.

Pancreatic cancer is a common malignant gastrointestinal cancer, the incidence rate of which is increasing year by year [1,2]. The early stage symptoms are not obvious, which can cause misdiagnosis and missed diagnosis; meanwhile, pancreatic cancer is highly invasive in the early stage, and many patients are already in the advanced stage once confirmed [3-5]. Over 80% patients have lost the chance to receive surgical treatment, thus appropriate and effective conservative treatment is the key to improve the survival quality of patients [4,6-8]. Some scholars suggest treating patients by routine supportive treatment combined with potent opioid analgesic, which can improve the cancerous pain and the life quality of patients [9-11]. In the recent years, novel non-invasive and non-radioactive therapies presented by high intensity focused intermediate frequency ultrasound have received extensive attention [12-14]. Thus, intermediate frequency ultrasound combined with morphine is expected to have good effects in treating malignant pancreatic cancer. In this study, a prospective randomized controlled analysis was conducted.

A total of 162 pancreatic cancer patients admitted in our hospital during February, 2010-February, 2013 were selected. Inclusion criteria: Confirmed as pancreatic cancer by pathological puncture biopsy and imageological examination; Not suitable for the surgical resection; predicted survival time ≥ 3 months; Patients and surrogates both understand and agree to this study and sign the conformed consent. Exclusion criteria: Complicated with severe heart, liver or kidney disease; Have psychological or neurological disease history; Received radiotherapy or chemotherapy previously before inclusion; Complicated with coagulation dysfunction or obvious bleeding tendency; The case data is not complete or lost to follow up.

Routine treatment: The patients in the both groups received routine treatment for malignant pancreatic cancer, including fluid infusion, nutrition support, electrolyte recovery and acidbase balance et al, and symptomatic treatment was applied according to the symptoms. The patients with liver metastasis received liver protection drug (bifendate), and the patients who had severe jaundice received percutaneous transhepatic cholangial drainage (PTCD) to reduce the jaundice.

Analgesia therapy: Based on the routine treatment, the patients in the both groups received potent opioid analgesic. The patients orally took morphine hydrochloride pill (Qinghai Pharmaceutical Factory Co. Ltd., Xining, China), 1-1.5 pill every time (20 mg-30 mg) for every 12 hours. The morphine dose was adjusted accordingly. The analgesic treatment was continued for 21 days.

Safety: The blood pressure, respiration, liver and kidney function, blood and urine routine test were closely monitored, the adverse reaction was observed, and the intermediate frequency ultrasound related adverse reactions such as skin burn and organ perforation were also observed.

The patients were followed up for 2 years to observe the survival situation.

Table 2. Comparison of the VAS and morphine dose during treatment between two groups (x ± s).

After treatment, the serum VEGF and HGF were both significantly decreased in the observation group (P<0.05), but were not changed in the control group (P>0.05) (Table 3).

The vital signs in the two groups were not obviously changed, and there was no adverse reaction such as skin burn or organ perforation. 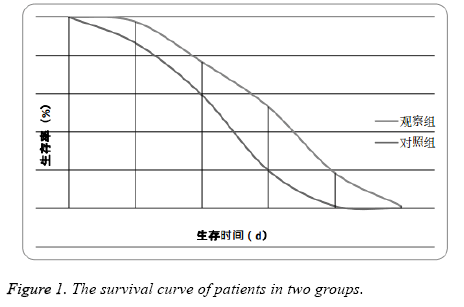 Figure 1: The survival curve of patients in two groups.

Pancreatic cancer is one of the malignant cancers that have the worst prognosis, and at present the MST of advanced pancreatic cancer is only 3-4 months [17,18]. To the patients who don’t meet the indications of surgery, the most common therapeutic regimen is radiochemotherapy or combined therapy. However, the tolerance of those patients is poor. Although the above treatment can inhibit the progress and metastasis of the cancer to a certain extent, it has no obvious effect on improving the surviving of patients [19-24]. The pain caused by pancreatic cancer is an important reason that decreases the life quality of patients [25-27]. Thus, some scholars suggest prolonging the surviving of patients by palliative treatment combined with analgesic drugs.

In this study, the potent opioid drug morphine was selected for analgesic treatment. After 21 days when the treatment was completed, VAS in the control group was significantly decreased, suggesting that morphine is effective in inhibiting cancerous pain. Morphine can simulate the effect of endogenous analgesic substance enkephalin to active opioid receptor in central nervous system, which can cause analgesic effect just like in a dream. This effect is optimal to the continuous dull pain caused by cancer. Meanwhile, morphine can decrease the excitability of central nervous system, and alleviate the tension and anxiety of patients to a certain extent, which is significant in improving the confidence of patients, ensuring the compliance and tolerance of patients [23,28]. However, some scholars point out that long term administration of morphine will cause drug addiction, decrease drug efficacy, also increases the smooth muscle tension and decrease sensitivity of respiratory center to carbon dioxide which easily causes respiratory failure and even death [23,24]. In this study, the morphine dose is not decreased during the treatment in the control group, suggesting that the alleviation of the pain is completely dependent on analgesic drug, which also verified the above conclusion.

The intermediate frequency ultrasound presented by high intensity focused ultrasound has received extensive attention. The technical principle is that due to the focusing and penetrativity of ultrasound wave in the body, it can produce instantaneous high temperature, and the heat effect and cavitation effect caused by local high energy can rapidly solidify the cancer cells to cause the degeneration and necrosis [29]. In this study, high intensity focused ultrasound was applied based on morphine analgesic in the observation group and we got better analgesic effect. The CBR was up to 84.0%. To further analyze the mechanism we also detected VEGF and HGF and found that VEGF and HGF were continuously decreased during the treatment. The growth of tumor is dependent on the formation of new vessels. VEGF can combine with the vesicae in the cytoplasm to form membrane channels, which provides the condition for the passing through of big molecule substance such as protein. This can increase the permeability of vessels, promote the formation and progress of cancer [30-33]. HGF is a polypeptide growth factor, which can promote the angiogenesis of cancer vessels, however the mechanism remains unclear [32,33]. In the control group, the VEGF and HGF levels were not obviously changed during the treatment, which might be the main reason that causes a poor MST. We consider that high intensity focused ultrasound can kill the local cancer cells, and also control the VEGF and HGF levels, which is the key to improve the life quality of patients. In this study, VEGF and HGF were increased slightly after the treatment was finished, which also verified that this was beneficial from intermediate frequency ultrasound.

The body of advanced stage pancreatic cancer patients is usually weak, and whether they can tolerate the treatment is the key of clinical efficacy. In this study, there was no obvious adverse effect in the observation group, suggesting that intermediate frequency ultrasound combined with opioid analgesic has good safety. However, we also found that the MST was only increased by 2 months, thus the efficacy still needs further improvement. This issue will be explored in the further study.