Rabies features encephalitis and neurological symptoms. Although its clinical course can be prolonged by life support measures, its fatal outcome is virtually inevitable. Coronary artery disease has become so common that anyone complaining of chest discomfort is suspected. Despite the fact that rabies encephalitis is often complicated with heart impairment or myocarditis, it can still be ignored when cardiac symptoms like chest discomfort or shortness of breath act as chief complaints. This case report demonstrates a rabies patient presenting with conditions similar to acute coronary syndrome; he even underwent coronary angiography. He was the only rabies patient admitted by cardiologists in our hospital. This case reminded us that some unusual cause of cardiac manifestations needs to be considered during daily management of chest discomfort.

Encephalitis and neurological signs are iconic symptoms of rabies [1]. Coronary artery disease has become so common that anyone with the complaint of chest discomfort is suspected. Despite the fact that rabies encephalitis is often complicated with heart impairment or myocarditis, it can still be ignored when cardiac symptoms like chest discomfort or shortness of breath act as chief complains. No reports have been published on rabies misdiagnosed as coronary artery disease. Here, we present a case of a rabies patient who underwent coronary angiography and was admitted in coronary care unit.

A 34 y old man came to the emergency room of our hospital with a chief complaint of intermittent chest discomfort and shortness of breath for 3 days. The symptom showed no distinct relationship with exercise and the duration was not clear. The patient used to be a drug user, but had quitted recently. He had no history of hypertension, diabetes mellitus, or hyperlipidemia. Immediate electrocardiogram displayed ST segment depression on lead V4-V6 (Figure 1A). Laboratory tests in ED showed elevated levels of cardiac biomarkers (cTnI 1.24 ng/ml, CK-MB 5.9 ng/ml). With these results, acute coronary syndrome could not be ruled out. Dual antiplatelet therapy with aspirin and clopedogrel 300 mg was adopted, and the patient was then transferred to the catheterization room for coronary angiography. Immediate CAG showed normal coronary arteries without any plaque or intimal rupture (Figures 2A-2D). He was then suspected with myocarditis. Antiplatelet therapy was stopped and he was admitted to coronary care unit for further treatment. 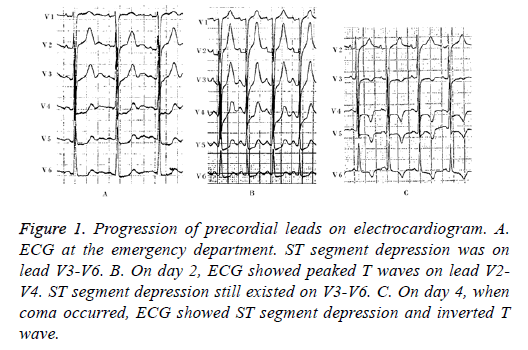 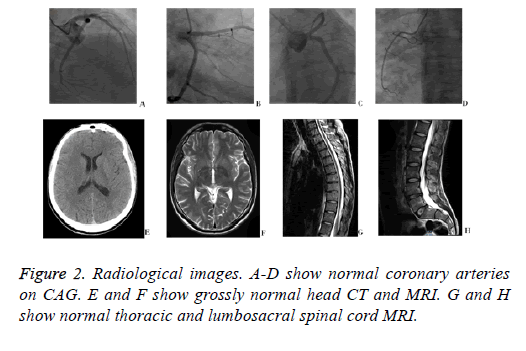 On day 2, the patient presented hyperpragia and inappetence. Strangely, he manifested signs of dysphagia when asked to drink water. The diagnosis of drug withdrawal syndrome was suspected, so he was treated with diazepam 10 mg intramuscular injection. Laboratory results showed slight increase in cardiac biomarkers (cTnI 2.43 ng/ml, CK-MB 11.2 ng/ml) in comparison with those from ED 16 hours ago. On the same day, he developed muscle weakness and myodystonia. Lab results showed continuous elevation in cTnI and CK-MB, but the level of CK elevated disproportionately (CK 321 U/L). Antibodies for viruses that cause myocarditis-EB virus, cytomegalovirus, and Coxsackievirus-were negative. His ECG continuously displayed ST depression and high T wave on lead V3-V6.

On day 4, the patient intermittently had loss of consciousness and drop in blood pressure and oxygen saturation. So an oxygen mask and dopamine was used to maintain blood oxygen and pressure. Cerebral and spinal cord MRIs were performed but revealed nothing abnormal (Figures 2E-2H). Routine and chemistry of cerebrospinal fluid were normal as well. Tests of common narcotics were negative.

On day 5, mechanical ventilation was used because of severe dyspnea and hypoxia. Having reviewed the patient’s history, especially his progressively deteriorating hydrophobia and neurological symptoms, consultants from communicable disease center proposed the diagnosis of rabies. His family member remembered that he was bitten by a stray dog on his right arm during his travel in India 2 months ago. Samples of saliva and cerebrospinal fluid were transported to communicable disease center for viral certification. Despite advanced critical care, the patient started to have ventricular escape beats on day 6; soon after, he died due to respiratory failure and drop in blood pressure and cardiac arrest. Nested PCR was used to detect rabies virus in saliva and cerebrospinal fluid. The complete sequence of the N gene was amplified with two pairs of primers (Table 1). Agarose gel electrophoresis was performed on the secondary PCR products. Result was positive for rabies virus in saliva sample (Figure 3). All staff members having contact with the patient received post exposure prophylaxis. Postmortem study was not performed.

Note: “F” for forward primer and “R” for reverse primer. The positions of primers are based on the PV strain of RABV (accession no.M13215). N127 and N8m primers were used for the first half segment. N577 and N829 primers for the latter half. 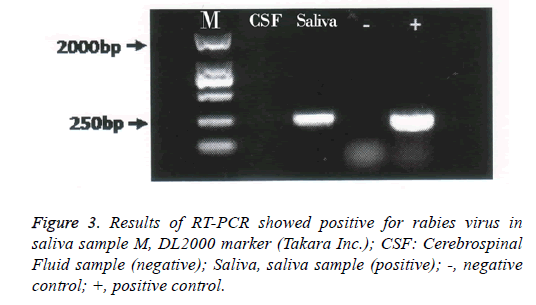 As bullet-shaped, single-stranded, negative-sense RNA virus, rabies virus is the causative agent of the ancient zoonosis rabies known to cause acute encephalomyelitis, and is almost universally fatal in unimmunized patients [2]. The total number of reported human rabies deaths by WHO have been mostly estimates, varying between 40,000 to 60,000 cases annually over the past 3-4 decades [1]. The majority of deaths are caused by unvaccinated dogs, and often in poor and remote regions, where post exposure rabies prophylaxis is neither readily available nor affordable [3]. Survival cases were scarce [4]. With the improvement of sanitation conditions and vaccination of domesticated canines, rabies in urban China seems to have become a forgotten story. Despite the fact that China is the second after India in the annual incidence of human rabies cases [5], ordinary medical practitioners may not be able to recognize this disease before its neurological symptoms develops.

Although rabies is notorious for its causing encephalomyelitis, it is not constrained to the nerve system [6]. Rabies spreads in human body in three steps. After the initial bite, the virus duplicates itself in myocytes near the wound, and invades peripheral nerves in the vicinity. Then it reaches spinal cord and multiplies there. By reverse transmission the virus eventually breaches into the brain. Finally, the rabies virus is known to reach peripheral organs, especially the saliva gland, taste buds and olfactory nerve epithelium through centrifugal spread. The cardinal inflammatory process is described as following the conduction system of the heart, as the virus spreads along the sensitive and autonomic nerves [7], which eventually lead to myocarditis. Involvement of the heart in the form of myocarditis is a well-known complication of rabies. A postmortem case report demonstrated rabies ribonucleoprotein in the heart, supporting the hypothesis that rabies virus replication could occur in both cardiac neurons and in cardiac myocytes [8]. But experiment with rabbits demonstrated that rabies virus antigen was not found in the hearts, so the myocardial lesions were classified as neurogenic cardiomyopathy [9].

Coronary artery disease, especially acute coronary syndrome has become so pervasive that most patients presenting symptoms of chest comfort will be suspected, and coronary angiography is always the next step in their management to confirm or sometimes exclude this diagnosis. Occasionally we may forget that there are other conditions that also cause ST-T changes on ECG and elevated cardiac enzymes [10]. Clinical manifestations of coronary artery disease and myocarditis may be similar to each other; their ECG presentations, however, are distinguishable. In acute coronary syndrome, changes on ECG usually reflect the exact affected area supplied by culprit arteries. But for myocarditis, ST-T changes are more diffuse because of the diffuse inflammation. In this case, T wave inversion since the 3rd day may be attributed to neurological impairment.

Five general stages of rabies are recognized in humans: incubation, prodrome, acute neurologic period, coma, and death (or, very rarely, recovery). The incubation period after exposure in rabies is variable, typically 20 to 90 d, but ranges from a few days to a year or more [11]. The prodromal phase can last for 2-4 d, during which the patient may develop signs of fatigue, headache or nausea followed by fear, dysphoria or insomnia. The acute neurologic phase lasts for 1-3 d, during which hyperpragia and the iconic symptom of hydrophobia emerge. Hydrophobia occurs in about 50% to 80 % patients and consists of contractions of the diaphragm and accessory muscles of inspiration with swallowing [11]. The phase of coma may last for just 6-18 h. Muscular spasm turns into whole body flaccid paralysis, and the patient eventually dies from respiratory and circulatory collapse. In this case, the patient, bitten 2 months ago, suffered from throat tightness and chest discomfort for 3 d before seeking medical help and 1 d after hospitalization. His symptoms of hydrophobia, hyperpragia and muscular spasm lasts for 3 d. He died at midnight of 6th day in hospital from cardiac arrest and respiratory failure. Acute coronary syndrome was suspected at the onset because of his blurring chest discomfort, elevated cardiac enzymes and ECG changes. Optimal coronary angiography and disproportionate elevation of creatine kinase and CK-MB along with negative results of drug abuse finally led us to focus on the patient’s neurological symptoms. However, neurophathological features of rabies meningoencephalitis may be variable and do not correlate with clinical manifestations. The brain is usually grossly normal on MRI [12]. The spread of RABV to salivary glands occurs alongside the observed centrifugal propagation of virus to diverse end organs [13].

For cardiologists, this case was a lesson of infectious disease misdiagnosed. It reawakens the awareness of rabies for daily medical practice. Current management of patients with chest discomfort, elevation in cardiac enzymes and ECG changes has almost become rigid, and tend to act like a pipeline for coronary angiography. But physicians must never forget that similar symptoms can be caused by other diseases, some of which are no less deadly than acute coronary syndrome. Careful history taking, other than complete laboratory or radiological examination, should always be the priority.