To establish a method for qualification and quantification of gallic acid in Hedyotis diffusa Willd. and to investigate its proapoptotic mechanism on lung cancer cells. Gallic acid content was determined by HPLC under the following conditions: stationary phase: Diamonsil C18 column; mobile phase: 0.2% methanol acetonitrile-0.1% phosphoric acid: 0.1% triethylamine aqueous solution (3:97); detection wavelength: 216 nm; and column temperature: 40°C. Apoptosis was detected with a flow cytometer by observing the apoptotic cell morphology, and livin, survivin protein expressions were detected by Western blot. Injection amount of gallic acid was in a good linearity with the peak area at a range of 0.02-0.41 μg, r=0.9997. Average recovery was 99.55%, RSD=2.25%. Hedyotis diffusa Willd. extract had a dose-dependent proapoptotic effect on NCI-H460 cells and suppressed the expressions of surviving and livin proteins in NCI-H460 cells. Quantitative determination of Hedyotis diffusa Willd. of different origins proves that the method is sensitive, accurate, reliable and reproducible. Induction of apoptosis in NCI-H460 lung cancer cells is achieved primarily by inhibiting the NCI-H460 cells from expressing survivin and livin, which provides a theoretical basis for use of Hedyotis diffusa Willd. extract for lung cancer treatment.

At present, lung cancer has become the leading cause of cancer death in China. Preliminary experiments found that HHD extract had an inhibitory effect on NCI-H460 lung cancer cells, which was consistent with the literature reports. Nevertheless, what was studied was the extract of HHD, whose effective constituents were unclear. This paper aims to investigate the proapoptotic mechanism of HHD extract on lung cancer cells, in order to provide a theoretical basis for the treatment of lung cancer. Besides, the paper also aims to determine gallic acid,the major constituent of HHD, by HPLC; to control the quality of the extract; and to improve test reproducibility.

Comparison test of different mobile phases showed that under 0.2% methanol acetonitrile-0.1% phosphoric acid: 0.1% triethylamine aqueous solution (3:97), the peak of gallic acid in sample was baseline separated from the adjacent peaks, which was sharp and symmetrical in shape as well (Figure 1). Measurement of UV absorption spectrum of reference solution found that its maximum absorption wavelengths were 216 nm and 269 nm. Since gallic acid absorption was more sensitive at 216 nm, which could reduce the sampling amount, minimize the column contamination and allow steady baseline, 216 nm was selected as the detection wavelength. Figure 1 presents the chromatograms. 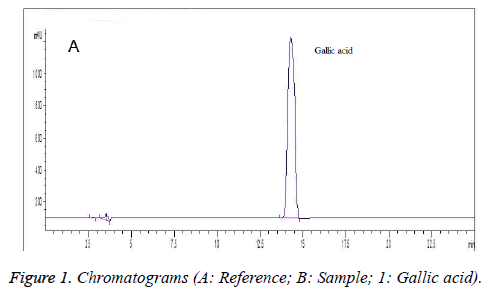 Appropriate amount of gallic acid reference was accurately weighed and added with 50% methanol to prepare an 8 μg/ml reference solution.

Appropriate amount of HHD was taken and crushed, 0.3 g of which was then accurately weighed and cold soaked in 30 ml of chloroform. After discarding the chloroform, the remaining was ultrasonicated with 50% methanol for 30 min, and then let cool and filtered. Afterwards, the filtrate was placed in a 50 ml volumetric flask, diluted to the mark with 50% methanol and shaken well to give the sample solution. According to the predetermined method, solvent was removed from the filtrate to yield an extract, which was precisely HHD extract.

0.0102 g of gallic acid reference was accurately weighed, placed in a 200 ml volumetric flask, diluted to the mark with 50% methanol and shaken well, 0.5, 1.0, 2.0, 4.0, 6.0, 8.0 and 10.0 ml of which were then precisely drawn and placed separately in 50 ml volumetric flasks, diluted to the mark with 50% methanol and shaken well. Each 20 μL of reference solutions of different concentrations was precisely drawn and injected into the HPLC system for determination of gallic acid peak area. Standard curve was plotted with peak area as the ordinate and injection volume as the abscissa to obtain the regression equation: A=4963.95C-36.17, r=0.9997, which indicated good linearity within a gallic acid injection amount range of 0.02-0.41 μg.

The same reference solution was precisely drawn and injected repeatedly five times for measurement of peak area. RSD was found to be 0.8%.

Samples of the same batch were taken and prepared into five sample solutions as per the above method for separate determination of gallic acid contents. The result revealed an average content of 1.47 mg/g, RSD=1.5%.

Each 20 μL of reference and sample solutions were accurately drawn and determined according to the above chromatographic conditions. The results of gallic acid contents in samples are listed in Table 1.

NCI-H460 cells were seeded in RPMI1640 medium containing 10% FBS and cultured in a 37°C, 5% CO2 incubator. Logarithmic phase NCI-H460 cells were collected and added with different amounts of HHD extract to final concentrations of 0, 50, 100 and 200 mg/L, respectively, which corresponded to the control group, low-dose group, medium-dose group and high-dose group.

Experimental data were expressed as x̄ ± s and statistically analysed using SPSS 17.0 software. Comparison between multiple sets of data was done by ANOVA at a significance level of α=0.05.

Under fluorescence microscope, the control group showed very low fluorescence intensity, while in the treatment groups, strongly green fluorescent apoptotic cells and red and green double fluorescent necrotic cells appeared. Apoptotic cells were rounded or shrunk, with intact membrane. Nuclear chromatin of partial cells condensed into blocks, lobules or unevenly thick fragments and separated from each other, which were unevenly dispersed in the cytoplasm. Vacuoles appeared in the cytoplasm to form apoptotic bodies. These suggested that HHD had a proapoptotic effect on NCI-H460 cells.

HHD contains a variety of chemical constituents, including liposoluble ones [10]. Low polar liposoluble constituents not only affect the separation of peaks, but also cause serious column contamination. Based on the chloroform insolubility of gallic acid, the present method firstly treats sample with chloroform, then extracts the sample with 50% methanol to yield satisfactory results.

The search for effective antineoplastics from the natural medicines is extremely important for lung cancer treatment. HHD has a marked antitumor activity, which can inhibit the proliferation of various tumor cells such as colon, lung and cervical cancer cells; suppress relevant signaling pathways such as nuclear transcription factor-KB (NF-KB), Mitogen- Activated Protein Kinase (MAPK) and epidermal growth factor receptor; and induce apoptosis of tumor cells [4,5,11]. Currently, there have been reports on the effect of HHD on lung cancer cells, which claim that HHD can induce A549 and SPCA-1 cell apoptosis. However, its proapoptotic mechanism on lung cancer cells is unclear yet, which requires further experimental study.

Livin and surviving are important Inhibitors of Apoptosis Proteins (IAP) discovered recently, which are specifically expressed only in the tumor and embryonic tissues [12-14]. Both contain domains inhibiting caspase proteases and play important roles in the occurrence and progression of tumors. Survivin is so far the strongest inhibitor of apoptosis, which is highly expressed in tumor cells such as esophageal, stomach, colon and breast cancer cells and can indirectly inhibit caspase activity by directly binding to caspase-9 or binding to auxiliary mitochondria-derived caspase activator to suppress apoptosis. Livin is a recently discovered novel IAP that is highly expressed in esophageal, stomach, breast and bladder cancer cells. After binding to caspase, Livin can block the protein removal function of caspase proteins, thereby inhibiting apoptosis.

Results of this study show that the HHD can induce apoptosis of NCI-H460 lung cancer cells and inhibit livin and surviving expressions in them, which provide a theoretical basis for the use of HHD extract for lung cancer treatment.