Purpose of present research was to prospectively test in dog model of ARF with hypothesis that the CEUS can quantitatively evaluate the perfusion changes of renal cortex in the early stage of the disease. The 15 healthy adult ARF dog models were injected intramuscularly with 50% glycerin into the hind legs followed by i.v. bolus 0.2 ml Sonovue in leg vein. Real time samples from dogs were collected with conventional and CEU examinations. The Blood serum Urea Nitrogen (BUN) and Serum Creatinine (SCr) level were tested along with kidney tissue sample of randomly selected dog. The converted parameters and blood test were compared using statistical software. Initial values of slope of Ascending curve (A), derived Peak Intensity (PI), Time to Peak (TTP), Area under Curve (AUC) were significantly high than the values before injection. In histopathological analysis no significant change was observed in 6 h after the injection of glycerin (P>0.05) and might be seen after 24 h (P<0.05). Quantitative analysis of CEU could monitor the changes of blood perfusion image of the renal cortex of the early renal function changes of dogs than SCr and BUN, has been more and more used in the diagnosis of clinical disease.

Acute Renal Failure (ARF) is characterized as the clinical syndrome which is identified by gradual and reversible reduction in Glomerular Filtration Rate (GFR). ARF is complicated in diagnosis by pathological process [1]. In very early stages of ARF, perfusion impairment is very common which usually precedes functional impairment. Valuable information can be obtained by accurately measuring renal perfusion rates in the early stage of ARF. Renal dysfunctions of ARF can be evaluated by various invasive and non-invasive techniques [2]. Among these techniques Magnetic Resonance Imaging (MRI), Single Photon Emission Computed Tomography (SPECT), multidetector Computed Tomography (CT) and positron Emission Tomography (ET) are most popular and very accurate in early detection of renal dysfunctions. However, these techniques suffered from various drawbacks related to quantification of renal perfusion and blood flow rates in ARF. These techniques are invasive, involves the use of ionizing radiations and also costly [3]. These techniques are not so sensitive and data available from these techniques varies from technique to technique at early stage of ARF. Conventional gray scale Ultrasonography (US) and Color Doppler Flow Imaging (CDFI) are widely recommended imaging tools for the examination of patients with ARF at very early stages. But these techniques also lack sensibility, specificity and angle dependency [4].

Since last few decades, Contrast Enhanced Ultrasound (CEUS) technology played vital role diagnosis and imaging of various internal tissues and organs. Contrast Enhanced Ultrasound (CEUS) technique is well known and widely accepted for diagnosis of liver lesions. CEUS allows renal perfusion imaging, with the use of gas-filled micro-bubbles to assess microvascular tissue perfusion, and is able to detect early stages of chronic renal allograft nephropathy [5]. In the world of ultrasound, use of contrast agent has opened new aspects for the diagnosis and evaluation of multiple organs including liver and kidney functioning. Since 2003, the European Federation of Societies for Ultrasound in Medicine and Biology (EFSUMB) study group has developed guidelines and protocols for the use CEUS, allowing a more standardized and reproducible practice of CEUS [6]. Assessment of microvasular tissue perfusion and early stage detection of chronic renal allograft nephropathy can be done by renal perfusion imaging by gas filled micro bubbles which can be function as red blood cell tracers [7]. These contrast agents are found to be very safe to renal system and rewarded for high tolerance and lack of radiation. So considering all these benefits of the CEUS it has been widely used for the diagnosis of kidney disorders like tumors, cystic lesions, cortical necrosis and trauma induced lesions. CEUS is found to be more sensitive when compared to contrast enhanced computed tomography for detection of cyst like lesions. CEUS can easily detect slower flow in smaller blood vessel hence proved more superior to color Doppler ultrasound in diagnosing renal infraction. In human beings, CEUS has already been applied for diagnosis and treatment of various kidney diseases like chronic kidney disease, kidney transplantation and acute kidney injury without any side effects due to contrast agent [8]. A reliable, non-invasive method for absolute quantification of renal perfusion in selective Region of Interest (ROI) in the cortex can be established by using an intravascular contrast agent.

Thus, considering all these advantages of CEUS, the purpose of present research was to prospectively test in dog model of ARF with hypothesis that the CEUS can quantitatively evaluate the perfusion changes of renal cortex in the early stage of the disease.

Animal model: The study was conducted as per recommendations and approval of Animal Ethical Committee of Department of Ultrasound, The Affiliated Hospital of Inner Mongolia Medical University, Inner Mongolia, China. The project approval no. is IMMU/0472/CONT/12. About 15 healthy adult male dogs weighing approximately 10-14 kg were randomly selected for the study. The ARF dog model was established by injecting intramuscular injection of 50% glycerin (10 ml/kg) in to the hind legs of the dogs. General anaesthesia was introduced using intravenous injection of 3% pentobarbital (1 ml/kg). Care has been taken to make procedures animal friendly or to minimize pain level. SonoVue bolus injection (0.2 ml) was given intravenously through hind leg veins of dogs.

CEUS examination: The LQGIQ-E9 (GE healthcare) ultrasonic diagnostic apparatus and 3.5 MHz convex array probe (for kidneys) was used to perform conventional ultrasound and Contrast-Enhanced Ultrasound (CEUS). The diagnosis was performed before and after injecting animal (6 and 24 h). Real time Contrast-enhanced ultrasounds of renal cortex blood perfusion of dogs were collected successively. Only experienced sonographer was allowed to perform CEUS. The slope of Ascending curve (A), Area under Curve (AUC), Derived Peak Intensity (DPI) and Time to Peak (TTP) were measured in renal cortex of dogs using time-intensity curve software. The Blood serum Urea Nitrogen (BUN) and Serum Creatinine (SCr) level were tested before contrast-enhanced ultrasound. Animal was randomly selected to remove and pathologically examine the kidney tissue 6 h after the injection of glycerin. The sample of the kidney tissues of the remaining test animals was removed and examined pathologically after 24 h contrast-enhanced ultrasound. The comparison of the above parameters and blood test was done using statistically analyzed software. Conventional gray scale ultrasound examinations of the kidney was performed before injection of SonoVue and maximum longitudinal scanning plane that included the entire kidney was determined [9].

Real time perfusion of kidney study was conducted by using conventional ultrasound and Contrast-Enhanced Ultrasound (CEUS) examinations using LQGIQ-E9 (GE healthcare). In both the cases diagnosis was performed before and after injection (6 and 24 h). In CEUS examination in vivo gray scale showed real time flow, kidney perfusion while this type of observation was lacking in conventional ultrasound.

Overall schematic diagram for the methodology is represented as below (Scheme 1): 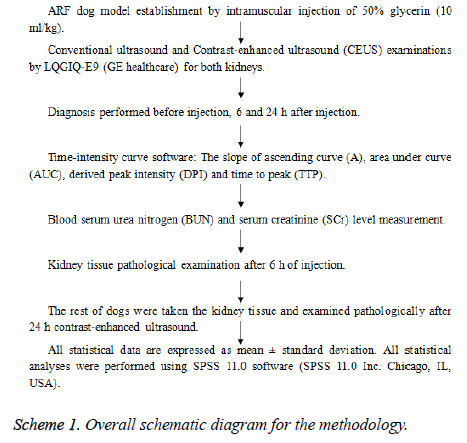 The animals recovered from anesthesia and surgery did not show any sign or symptoms of pain or edema in the abdomen related to vascular occlusion of main renal artery. Histopathological analysis showed significant occlusion after 24 h of treatment.

In CEUS continuous and gradual enhancement in renal arteries, small interlobular arteries in renal cortex to renal medullar arteries was observed. Conventional ultrasound demonstrated no obvious real time perfusion changes in both renal cortex. These observations clearly demonstrated superiority of CEUS as compared to gray scale ultrasound. Figure 1 shows CEUS renal perfusion images. Q-LAB quantification software was used for the plotting Time Intensity Curves (TIC) which was generated from the Region of Interest (ROI). Comparative perfusion indexes, and RI and PSV before and 6 h, 24 h after injection of glycerin in dog ARF model are represented in Tables 1 and 2. 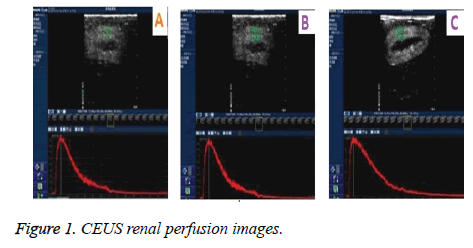 Table 1. Comparative perfusion indexes before and 6 h, 24 h after injection of glycerin in dog ARF model.

Table 2. RI and PSV before, 6 h and 24 h after injection of glycerin in dog ARF model.

Quantitative indexes were found to be the function of time with continuous progression of ARF. As seen from Figures 2 and 3 AUC, DPI, TTP and the slope rate of descending curve (α) gradually increased, however the slope rate of ascending curve (A) decreased. Significant changes have been observed after 6 weeks of operation on DPI and TTP. DPI was observed from 18 ± 2 to 22.5 ± 2.5 dB and TTP from 12 ± 2 to 18 ± 4 s. 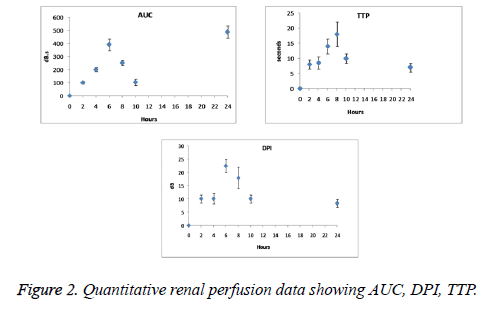 Table 3. BUN and SCr before, 6 h and 24 h after injection of glycerin in dog ARF model.

The diagnostic performance of the conventional ultrasound was suffered by difficulties in optimal viewing of the renal artery for the diagnosis of the ARF. But Contrast-enhanced ultrasound (CEUS) improved renal artery visualization and anatomic variations. Histopathological analysis showed (Figure 4) inflammation infiltration and fibrosis in right renal cortex, partial glomerular necrosis, apoptosis and focal necrosis. 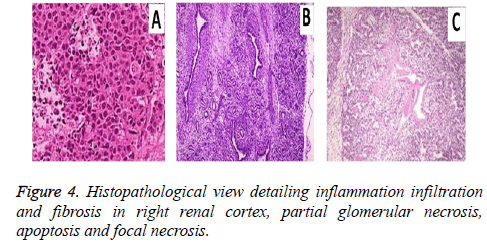 Contrast Enhanced Ultrasound (CEUS) technique is well known and widely accepted for diagnosis of liver lesions. In the era of ultrasound, use of contrast agent has opened new aspects for the diagnosis and evaluation of multiple organs including liver and kidney [11]. Various techniques including normal ultrasonography, colors Doppler are widely used for the collecting information regarding kidney damage, renal vascular disorders, kidney size, and hydronephrosis [12]. But sometimes it becomes very difficult to differentiate between renal cysts and mixed solid tumors. In such situations the use of CEUS examination technique becomes mandatory

In our experiments the dog model of Acute Renal Failure (ARF) was established. SonoVue bolus injection (0.2 ml) was administered intravenously in hind leg veins of dogs. The conventional ultrasound and Contrast-Enhanced Ultrasound (CEUS) examinations were performed. SonoVue® consists of micro bubbles containing sulphide hexafluoride which is entrapped in phospholipidic shell structure [13]. It has been widely used in cardiac ultrasound, visualisation of breast and liver tumors. The prominent and recent development related to CEUS is use of the Ultra Sound Contrast Agent (USCA) which is used for plotting Time Intensity Curve (TIC) [14]. After intravenous bolus injection of USCA’s TIC’s are used to express the concentration of contrast agent in the ROI [15]. This improves the enlargement pattern of the organ as well as helps in the diagnostic futures of the organs such as liver, spleen, kidney, breast and myocardium [16]. In our experiments gradual increase in AUC, TTP, DPI, α and the decrease in A values were statistically significant (p<0.05).

In normal kidney after IV bolus injection, artery filling occurs first which is followed by quick and complete filling of the cortical area within 10-15 sec of the injection. The medullar region enhancement occurs slowly [17]. The wash out phase can be identified by complete disappear of the micro bubbles from circulation. The medulla loses the enhancement at first which is followed by cortical wash out [18]. But in case of ARF we observed significant decrease in micro bubbles entering the cortex region which leads to the decrease in progressive blood flow to the renal cortex. In ARF dog kidneys enhancement and perfusion was found to be delayed. The kidney enhancement intensity and duration was dependent on the patient’s age, vascular status and renal flow. The conventional ultrasonography technique is based on transmission and reflection technology. Transmission technology distinguishes the tissues with different absorbance of ultrasound. Reflection technology (echo) is based on the principle of functioning sonar (Sonar Navigation and Ranging) [19]. But conventional ultrasonography is still suffered from in born limitations such as lack of sensitivity and visuality. On the other hand CEUS is having better sensitivity and yields valid and clear results under very complex and difficult anatomic conditions [20].

So from aforesaid discussion one can conclude that the technique used in present study is found to be most accurate as well as reliable and more sensitive for early perfusion changes of renal cortex in prescribed dog’s model while conventional ultrasonography technique provided less reliable basis for the diagnosis of early stage of ARF perfusion changes.

Quantitative analysis of contrast-enhanced ultrasound could monitor the changes of blood perfusion image of the renal cortex of the early renal function changes of dogs than SCr and BUN, has been more and more used in the diagnosis of clinical disease.

“No conflict of interest associated with this work”.