Psychosocial issues influence disease development and outcome which in turn could affect survival of cancer patients. This has been a subject of much debate. Nevertheless, there have been marked controversies among people who have discussed it. Some have reported correlations between different psychosocial variables [1-4]. On the other hand, others could not confirm such correlations [5,6]. Lewis et al [7] have affirmed that these inconsistency stems from poor methodology. The poor methodology includes (a) inadequately control for a variety of disease-related factors and therapeutic influence, (b) psychosocial variables were assessed after the cessation of treatment, (c) difference in estimating coping strategies, (d) multiple variables were assessed retrospectively, (e) marked variable outcome indicators, (f) seldom use of specific statistical analysis for survival (e.g. Kaplan-Meier plots and Cox method), (g) missing psychosocial data during follow-up, (h) inadequate consideration of differences in tumor staging and (i) subjective or non-standardized methods of evaluation. In addition, Irwin [8] in his recent article reiterated that the question of impact of psychosocial variables on the progression and outcome of cancer is still under discussion and entails more research. Therefore, we were provoked to study a heterogeneous group of cancer patients in which the psychosocial data were assessed on 3 instances and subsequently linked to disease outcome.

After the study was approved by the Department of Psychiatry technical and ethics committee,Hospital Universiti Kebangsaan Malaysia (HUKM), permission was obtained from the Head of Department of Oncology &Radiotherapy, HUKM where the sample was eventually gathered.

The sample comprised patients newly diagnosed of cancer who were being referred to the Department of Oncology & Radiotherapy, HUKM, Kuala Lumpur, Malaysia to undergo treatment over a period of 10 months. Subseque ntly follow-up assessments were carried out at 0.5 year and between 1 to 2 years. Eligibility criteria included age 18 years or older, awareness of the diagnosis of cancer within 3 months of assessment and treatment-naive patients. Exclusion criteria included patients with cancer of the oral cavity and adrenal glands since their treatment regimes were not standardized, organic brain syndromes, debilitating illness, previous psychiatric diagnosis, mental retardation and benign conditions.

The questionnaires were translated into Malay. Several revisions and back-translations were done to ensure that the translation was a fair one. The HADS has been validated and used previously in other studies [12]. However, to the authors’ knowledge presently the translated version of MOS-SF and CISS has not been used in the local context.

All data were analysed using the Statistical Package for Social Sciences (SPSS) version 10 computer progr am [13].

From distribution questionnaires at baseline to the patient’s death represented the length of survival. For univariate comparison, unadjusted time-to-event analyses were carried out using the Kaplan-Meier estimates [14] and the non-parametric log-rank test [15]. Initially the individual effects of the psychosocial and medical variables were tested. To determine the most significant independent prognostic factors, additional multivariate was done using the Cox model [16]. Psychosocial and medical variables that deemed significant in the univariate tests (such as mental health, gender and stage of the disease) and other variables that proved to affect survival (such as age, occupational status, education level, type of cancer, anxiety, depression total QOL and coping styles) were concurrently entered into the Cox model.

After the exclusion criteria a final cohort of 80 subjects was recruited and later followed-up. Table 1 represents the Cox model. It depicts that stage 4 cancer disease, gastro-intestinal tract, head & neck, neurological, gynaecological, bone and soft tissue malignancies as well as expression were independent and statistically significant prognostic factor of survival during the study period. 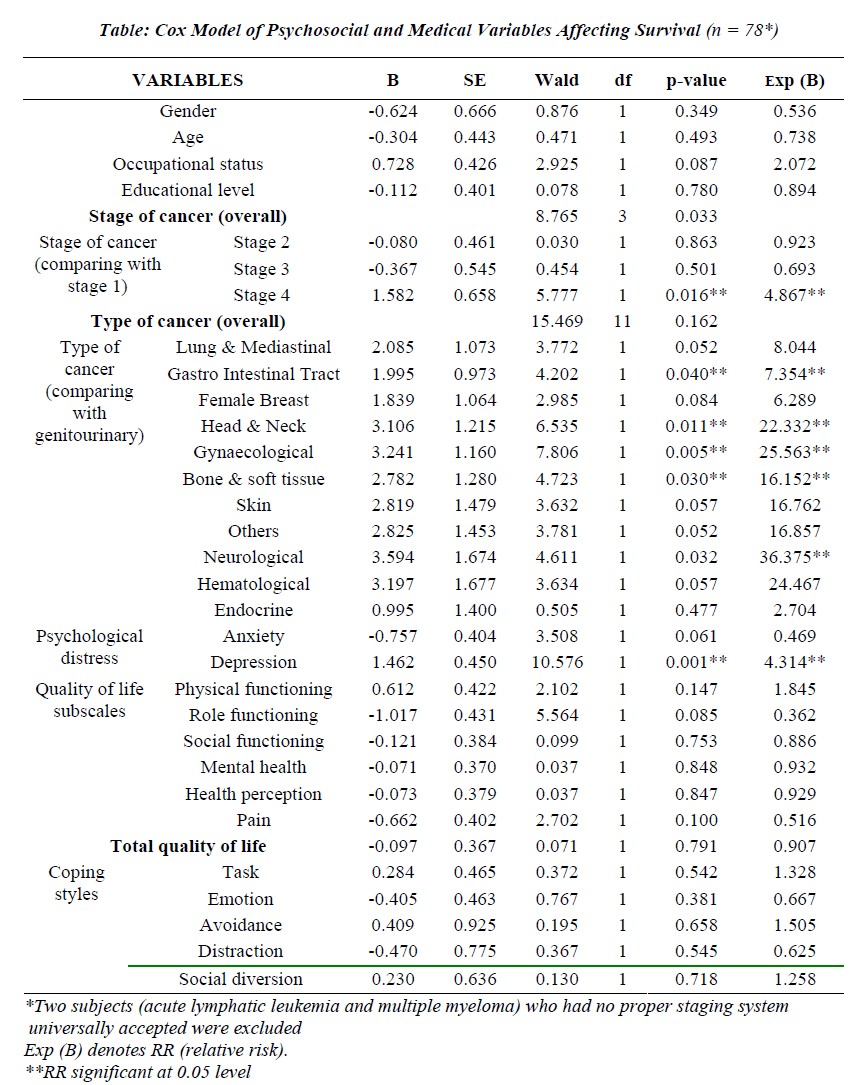 Based on relative risk (RR) it was revealed that patients with depression have at least 4- fold greater risk of dying than those without it. It was also noted that stage 4 cancer patients have almost 5 times greater risk of dying than than stage 1 patients. Furthermore, compared to patients with genitourinary cancers, those with neurological, gynaecological, head and neck, bone and soft tissue as well as gastrointestinal tract malignancies were found to have about 36, 26, 22, 16 and 7- fold greater risk of fatality, respectively.

Several variables of independent and significant prognostic importance of survival have emerged in the multivariate model namely depression (p = 0.001), stage 4 cancer disease (p = 0.0016), gastrointestinal tract (p = 0.040), head & neck (p = 0.011), neurological (p = 0.032), gynecological (p = 0.005), bone and soft tissue malignancies (p = 0.030). Even though there were no significant differences seen in the cohort based on univariate analysis at baseline and 0.5 years later the Cox model seemed to have taken into account multiple covariates concomitantly. There is no doubt that many confounders were operating which were masking associations and hence produced a spurious relationship in the univariate analysis.

Almost consistent with previous researcher [4] who also examined prospectively the relationship of depression and survival after haematopoietic stem-cell transplantation in 193 patients between 6 and 12 months after similarly controlling for covariates by the Cox model and found that depressed individuals had a three-fold greater risk of dying as compared to non-depressed patients based on relative risk (in our study the RR was 4). However, there was no standardized measure of depression in that study although it was defined as being present in any person who reported being bothered by depression and who had four or more of the following symptoms (anxiety, difficulty concentrating, feelings of isolation, fatigue or loss of memory).

Similarly, Steel et al [3] who had examined a homogenous population of 101 hepatobiliary carcinoma subjects and deduced that depression and reduced survival were found to be associated with diminished natural killer cell numbers. Nonetheless, this study although had used a standardized questionnaire on depression, failed to focus on coping strategies and Quality of life issues which have impact on survival.

Derogatis et al [1] assessed 35 women with metastatic breast cancer and showed that long-term survivors (subjects who lived for 1 year or more) reported more symptoms such as depression, guilt and anxiety while those who died less than 1 year (short-term survivors) were less symptomatic. The short-term survivors demonstrated significant lower levels of hostility and higher level of positive mood. It should be noted that their patients, suffered from predominantly more advanced disease in addition to having a much smaller sample size (n = 35) as opposed to our study (n = 80). In addition, it is recognized that women are generally at higher risk of developing depression than man [17]. Thus, to begin with their subject selection was already biased since it included only females and hence would spuriously report higher level of depression. Therefore, it is only prudent to interpret this study with caution.

From this study we intend to suggest that depression significantly impairs the survival rate in cancer patients.