#These authors contributed equally to this article

Pilomatrixoma is a rare benign tumor. Several special types of pilomatrixomas have been discovered, e.g. bullous pilomatrixoma and perforating pilomatrixoma. Here, we reported one of its special types. A 14 y old Chinese girl presented to our hospital with a six-month history of cystic mass on her right upper arm after a mosquito bite. A histopathological diagnosis was pilomatrixoma after complete surgical resection. The dilated lymphatic vessels are rare in the blister structure, thus, we used the term "pseudobullous" to describe the variant of pilomatrixoma in this case. The lesion of patient has no recurrence with follow-up for 1 y. The regular follow-up is required after excision, as rare cases with potential malignant transformation and recurrence have been reported.

In general, the pilomatrixoma is asymptomatic, and its development is slow. Therefore, it might be neglected in some cases. However, fast growth [3] and potential malignant transformation [4] have been reported in this benign tumor. The pilomatrixoma should be kept in mind in differential diagnosis of solid tumor.

A 14 y old Chinese girl visited our hospital for a cystic mass on her left upper arm. The patient reported that a soybean-sized nodule developed on her right upper arm after a mosquito bite approximately six months before her hospital visit. The patient experienced no subjective symptoms at the time, and the nodule has not been treated. However, the skin lesion gradually enlarged and became soft afterwards. The patient was previously healthy and had no family history of similar diseases. Systemic examination of the patient revealed no obvious abnormalities. A single hemispherical cyst with approximately 2.0 cm diameter was found on the upper left arm by the dermatologic examination. The cyst appeared dark red color and semi-transparent. It had a smooth surface and a clear boundary, and displayed blister-like changes. In addition, the cyst showed no adhesion to the surrounding tissues. On palpation, the cyst was soft in texture with an underlying hard nodule. However, the patient had no tenderness under palpation (Figure 1). 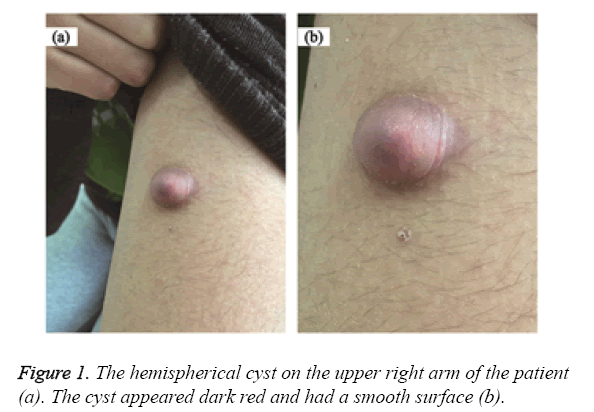 Figure 1: The hemispherical cyst on the upper right arm of the patient (a). The cyst appeared dark red and had a smooth surface (b).

The cyst was subjected to complete surgical resection. A histopathological examination of the removed cyst showed a normal epidermis. However, a sharply demarcated lobulated mass was observed in the dermis. The mass was composed of a large number of giant eosinophilic cells that were large in size and had abundant cytoplasm as well as several small basophilic basaloid cells that had rounded nuclei and prominent nucleoli. In addition, local foci of calcification were clearly visible. Based on the above findings, the lesion was diagnosed as pseudobullous pilomatrixoma (Figure 2). The lesion of patient has no recurrence with follow-up for 1 y. 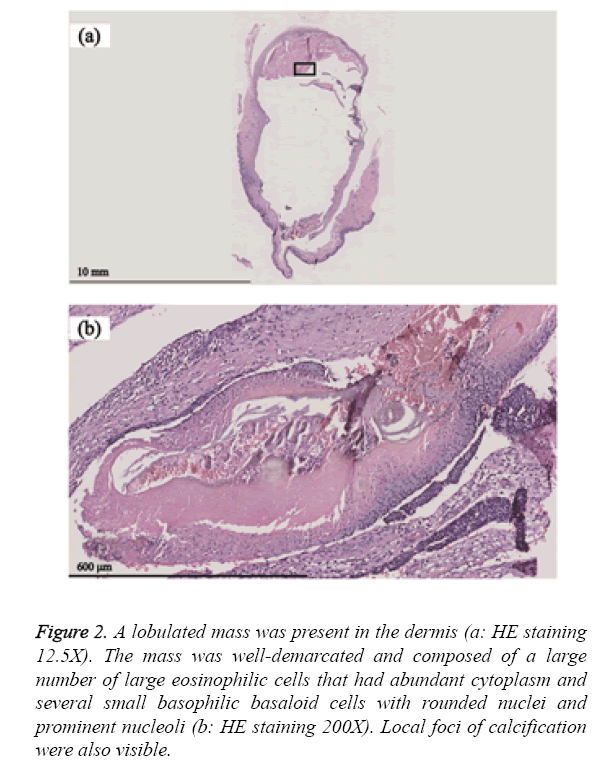 Figure 2: A lobulated mass was present in the dermis (a: HE staining 12.5X). The mass was well-demarcated and composed of a large number of large eosinophilic cells that had abundant cytoplasm and several small basophilic basaloid cells with rounded nuclei and prominent nucleoli (b: HE staining 200X). Local foci of calcification were also visible.

Pseudobullous pilomatrixoma shows a predilection for female’s 10-20 y of age. The skin lesions often occur on the head and neck [5]. It was reported that up to 9% patients have a history of recognizable trauma (insect sting or bite, vaccine) on the same location before the formation of tumor [6]. The histopathological characteristics of pilomatrixomas include cancer nests composed of basophilic granulocytes and eosinophilic shadow cells. Many different theories have been proposed to explain the cause of bullous pilomatrixoma. One hypothesis claims that tumor cells or inflammatory cells produce enzymes that degrade collagen fibers. The blister-like appearance is due to the accumulation of lymphatic fluid in the dermis. Another hypothesis proposes that the blister-like formation is caused by mechanical irritation. It is widely accepted that blister is caused by the lymphatic vessel occlusion. According to the hypothesis, the pressure in the indurated area of the pilomatrixoma causes the obstruction of lymphatic vessels and the subsequent dilatation of lymphatic vessels and leakage of lymphatic fluid, resulting in edema in the dermis and the bullous appearance [7]. The dilated lymphatic vessels are rare in the blister structure of this patient. Thus, we used the term "pseudobullous" to describe the variant of pilomatrixoma in this case, according to the description in the studies of Erdogan et al. [8]. The pilomatrixoma has a potential risk to transform a malignant pilomatrix carcinoma, although the pilomatrix carcinoma is also considered to arise de novo [9]. Currently, the suggested treatment for this disease is total surgical resection [10]. However, the regular follow-up is required after excision, although recurrence is rare.