Varicocele disorder is defined as a form of abnormal dilation and tortuosity of venous plexus (venous) noticeable above the testicles. The main patterns of the level of abnormal heat distribution in the scrotum can be detected by the help of thermal imaging. It should be noted that Thermal Imaging is widely considered as a distant, non-contact, and non-invasive bunch of procedures for the detection of a wide array of diseases. Adopting a non-contact infrared camera (SDS Hotfind L) and by taking images of 50 patients with varicocele, the potentialities of thermography were probed and assessed. In two cases, by means of heat distribution, varicocele was identified through a thermal camera; one included thermal asymmetry and increased temperature in venous plexus (pampiniform) and no thermal increase in the testicle of the same side (It is grade II of varicocele with a temperature difference around 1°C), and the other increased temperature of venous plexus (pampiniform) as well as the increased temperature of the testicle of the same side (It is grade III of varicocele with a temperature difference around 1.5°C). In the same line, the accuracy of detection of thermography is 76% in grades of varicocele. Moreover, the accuracy of recognition of thermography through the convolution neural network is 71%. Based on the results of this research, thermography can be an applicative method for initial screening and can be adopted as a supplementary technique to other diagnostic techniques due to lack of exposure, being of low cost, and providing a relatively appropriate diagnosis in varicocele.

Medically speaking, Varicocele is defined as the abnormal dilation and tortuosity of venous plexus (venous) above the testicles. Such disorder seldom occurs at ages under 10 but its occurrence among adults and infertile men is around 15% and 20-40%, [1]. Among people with secondary infertility (already having a child), its prevalence may reach 70% [2]. 90% of samples occur on the left side and only 10% of them are bilateral [3]. This is due to the higher length of the vein discharging the left testicle blood into the renal vein and its more vertical angle in comparison with the right testicle. One of the main theories defining the pathophysiology of varicocele refers to the theory of testicular temperature increase [4]. Abnormal thermal patterns are easily identifiable by the help of thermal imaging [5]. It is widely held that Thermal Imaging is a distant, non-contact, and non-invasive method with a high level of flexibility [6]. Digital infrared thermography of scrotum refers to a non-invasive, sensitive diagnostic tool for the recognition of primary varicocele using the scrotal skin surface temperature measurement. A more recent study has put forward the diagnostic criteria of scrotal thermography with the goal of varicocele detection [7]. It has also been proved that scrotal thermography is a beneficial diagnostic method for the detection of mild varicocele as well as the postoperative period [8]. Generally, Thermography has also been employed as a successful technique for follow-up [9]. In this respect, asymmetry technique is among the main principles and procedures for the analysis of thermal images. Moreover, the present research is intended to identify the strengths and weaknesses of thermography systems in scrotal thermography for the recognition of varicocele. In this regard, the main assumption is that scrotal digital infrared thermography is the main tool for the diagnosis of varicocele disorder.

In the present study, a thermography device with a non-contact infrared camera (SDS Hotfind L) was used. In this study, 50 patients suspected of varicocele were clinically examined by a specialist and the results were recorded. It is worth mentioning that all patients have been randomly selected, and all of them had referred to an urologist. Before conducting the thermal imaging, some items such as imaging conditions, room temperature, patient’s comfort, and so on, all are effective in providing false or true responses of thermography, were investigated. Then, the patients were placed in front of the camera in a standing position with naked lower part of the body. The patients were asked to hold the tip of their penis upward with their finger in a way that the patients’ legs were stretched, testicles hung freely, and the head of the penis was kept against the abdominal wall. Finally, thermography images were taken from the testicles by the operator. Monitoring the temperature of the scrotum is part of the diagnostic evaluation of varicocele.

If k is the input image and k is the desired assumed output and if xk and dk are kth images in the training collection and kth desirable output vector and ykn are the real outputs, the error function is defined as follows [10]:

This equation functions based on the error of total inputs. After calculating the error of gradient for the weights and bias, we can get help from variety optimization algorithms to minimize errors and training network. In this paper, optimization of the first order gradient descent and back propagation error methods have been applied for correcting free the index of convolution neural network. The output of neural network includes three classes (Grades 1-3 varicocele).

Based on the results of previous studies, the temperature of the right and left venous plexus complex and testicles are points of attention. Visual analysis of these points produces a thermographic pattern sample [7]. The uniform temperature on both sides of the scrotum is regarded normal. In terms of thermography, varicocele is increased the temperature of an area that is detected using two major patterns [11]. An example of a thermal image taken from patients has been shown in Figure 1. 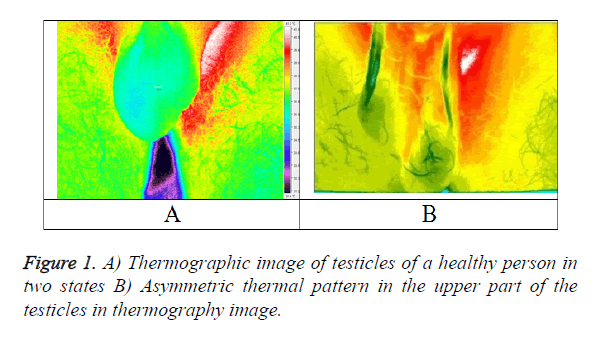 Figure 1. A) Thermographic image of testicles of a healthy person in two states B) Asymmetric thermal pattern in the upper part of the testicles in thermography image.

As Figure 1b can be observed, an asymmetric thermal pattern can be seen in the pampiniform venous plexus area at the top of the right and left testicles. The specialist doctor’s opinion corroborates grade 2 of varicocele. In some cases, the high scrotal temperature can be observed only in the venous plexus (pampiniform) and there is no increase in temperature in the testicles of the same side. In general, the approximate temperature difference between patients with varicocele with their grades is shown in Table 1.

Table 1. The approximate difference of temperatures among the patients with varicocele.

50 persons were tested and evaluated. Initially, all were tested with Doppler ultrasound. From surveyed cases, 35 patients had diseases related to testicular. The Results of Testicular ultrasound of patients are shown in Table 2 with considering their varicocele grade. Also, diagnostic functions of thermography were evaluated according to presented patterns in this article. It is worth mentioning that from 50 cases, 5 patients were excluded from Examining due to cystic masses and etc.

Table 2. Comparison of the results between diagnosis of thermography and ultrasound in grade varicocele.

The Obtained results of the convolution neural network for clustering have been shown in Table 3.

Currently, varicocele diagnosis depends on physical examination and ultrasonography/Doppler scrotum. Physical examination is subjective and also it cannot be helpful alone in the diagnosis of subclinical varicocele [12]. Clinical experience of the examiner and the interpreter is one of the disadvantages of ultrasonography/Doppler. In addition, the use of ultrasound in the postoperative stage as a follow-up is restricted [13]. Thermography allows imaging of the surface temperature distribution. Recent developments in the field of focal thermal cameras, as well as mobile software, have made digital thermography to be presented as an affordable and easy method. Testes temperature is about 3 degrees Celsius lower than the body temperature (37°C) [14]. The present study aimed to analyse the thermography images of patients with typical varicocele and try to propose elements for these criteria. The thermography defined in this study correctly confirmed the left varicocele diagnosis in all patients. Merla et al. stated that temperatures above 34°C in the pampiniform network vein and/or scrotal temperatures above 32°C are indicative of varicocele [15]. In the studied sample in this research, 83% of patients had a temperature above 34°C and 92% of them showed temperatures above 32°C. Tucker reported that retention of breath can help diagnose of varicocele, and in a normal mode (i.e. absence of venous reflux), this leads to a decrease in temperature by 0.5°C [16]. Nogueira et al. and Yamamoto et al. stated that a temperature difference of 0.3 and 0.8 in the right and left sides of upper part of the pampiniform network are indicative of one-sided varicocele [17]. It should be emphasized that this clinical sign alone cannot be taken into account in one-sided varicocele. The temperature of the scrotum skin is lower than that the upper part of the thigh [18]. In this study, the temperatures of the central part of the upper thigh were measured as the calibration temperature. In all patients, the temperature of the left pampiniform network was higher than that of the upper part of the thigh. In the study conducted by Merla et al., the researcher raised the possibility for measuring the difference of temperature return speed after cooling of the scrotum [15]. The obtained Mean difference of temperature in the venous plexus (pampiniform) of patients with grade III varicoceles is 1.5ºC and in patients with varicocele grade II is almost 1 degree Celsius.

The importance of studying and research in this field is due to the fact that few studies and comparison have been conducted on varicocele diagnosis in relation to thermography. The findings from the present study show that thermography has some advantages and disadvantages in the detection of varicocele. Sensitivity to temperature, spatial resolution, and its non-contact nature, and safety are some of the features of thermal imaging. The results of this study suggest that thermography can be used for primary diagnosis or quick screening. In addition, it can be applied as a supplement to ultrasound. In other words, although thermography can be helpful in the initial screening for determining the positive or negative result of affliction with varicocele, determining the grade of diseases requires higher accuracy and more studies. Using a large number of patients can increase the accuracy of diagnosis.

We are thankful for this research has been supported by AJA University of Medical Sciences.