Herbal products have been used since the dawn of civilization on the earth to maintain human health and to get the remedies from various diseases by the vast majority of the world’s population. Among these herbs, P. niruri has been widely used all over India for the treatment of jaun-dice and other hepatic disorders [1]. Venkateswaran et al [2] reported that there are one or more materials in P. niruri, which inhibit the replication of woodchuck hepati-tis virus in vivo and decrease the pathological effect of the same virus on woodchuck liver. Moreover clinical studies on humans have also been carried out with P. niruri with-out any side effect [3]. It has been shown in various stud-ies that the herb has potent hepatoprotective activity against various hepatic disorders like viral hepatitis and toxicity caused by different drugs and environmental toxicants [3,4,5]. But mechanisms responsible for this hepatoprotective action of P. niruri, however are not well defined.

Acetaminophen (APAP) overdose is the most frequent cause of drug induced liver injury. The drug is safe at therapeutic doses, but its high dose can cause hepatoxicity in experimental animals and humans [6]. In our laboratory, studies on the hepatoprotective action of P. niruri against APAP toxicity are being carried out. APAP in-toxicated mice were injected with protein isolate of P. niruri, prior to (preventive properties) and after (curative properties) the intoxication. Thereafter, serum levels of marker enzymes related to hepatic integrity, like, GPT, and LDH, as well as cellular GSH level in the liver were determined. In addition, histopathogical studies were done to prove the effectiveness of the protein isolate of P. niruri in the preventive and curative role against APAP induced toxicity in vivo.

Extraction of proteins from the leaves

Fresh leaves were extracted with phosphate buffer, pH-7.4 at 4°C in a cyclomixer. The extract was then centrifuged at 20,000 xg at 4°C.The resultant clear supernatant was then brought to 60% ammonium sulphate saturation and then centrifuged at 20,000 xg at 4°C and the pellet collected was reconstituted in 50 mM phosphate buffer, pH-7.4.

Different protein concentrations were measured according to the method of Bradford [7].

Swiss albino mice (male, body weight 20 ± 2 g) were acclimatized under standard laboratory condition for two weeks before starting experiments. They were provided with standard pellet diet and water ad libitum .The animals were divided into several groups of 6 in different models of experiments.

First group served as controls. Second group received only APAP orally at a dose of 300 mg/kg of body weight for 2 days. Third group were pretreated with the protein isolate for 3 days by intraperitoneal injection at a dose of 5 mg/kg body weight of mice and followed by APAP at the same dose as above. The concentration of protein iso-late to be used was determined by carrying out a dose response study with the protein isolate pretreated group using different doses of protein concentrations ranging from 1- 20 mg/kg of body weight.

Fourth group was post treated with the protein isolate for 3 days after APAP treatment. With this group a time course study was done by injecting P. niruri protein iso-late for 1, 2, 3 and 4 days. Optimum result was obtained when protein was administered for 3 days.

Serum was prepared from the bloods collected. About 200 mg liver tissue was homogenized in 10 volumes of appropriate buffer. The blood serum and supernatant were used to estimate the hepatotoxicity produced by APAP. Serum GPT was measured by 2,4 DNPH method of Reitman and Frankel and LDH [8] was measured using an assay where reduction of NAD to NADH by LDH was measured by monitoring the increase in absorbance at 340 nm. Hepatic GSH level was determined by the method of Ellman [9]. For liver histopathology mice were divided into four groups and treated with APAP and protein isolate as de-scribed earlier. Liver specimens from all the experimental groups were fixed in 10% buffered formalin and sections of about 5 μm thickness were stained with haematoxylin and eosin stain to study the effect of P. niruri protein iso-late on the APAP treated mice liver.

The data were expressed as mean +SEM (n=6), and n refers to the number of animals. Differences between the groups were analysed by one-way ANOVA, using the Epistat package.

A dose response study was done by injecting different concentrations of protein isolate prior to APAP administration. The doses used were, ranging from 1-20 mg/kg of body weight of protein. Serum GPT level of all the mice were measured. It is evident that optimum result was obtained at a dose of 5 mg/kg body weight of protein, which was used in all other experiments.

A time dependent study was done by injecting protein isolate for 1, 2, 3 and 4 days after 2 days of APAP administration at a dose of 300 mg/kg body weight. Serum GPT levels of these mice were measured. From the results it is evident that 3 days protein injection gave optimum results. So, further experiments were carried out by injecting the protein fraction for 3 days. 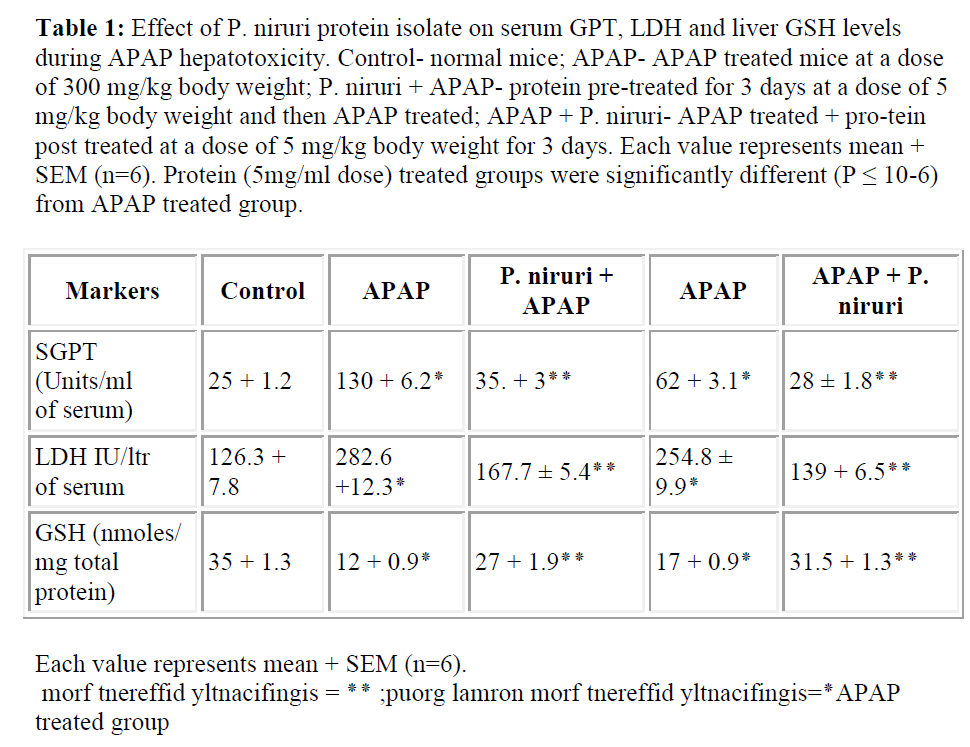 Histopathological samples were taken from normal, APAP treated and protein isolate treated (both pre and post) mice liver. Histopathological assessment represented in Fig. 1, shows prominent changes including centrilobular necrosis, bile duct proliferation, disorganization of normal radiating pattern of cell plates around central vein etc. in tissues treated with APAP. Qualitatively, the inflammation in protein isolate treated mice liver before and after APAP administration were less severe compared to that with APAP. These observations significantly prove the protective role of the protein isolate from P. niruri. 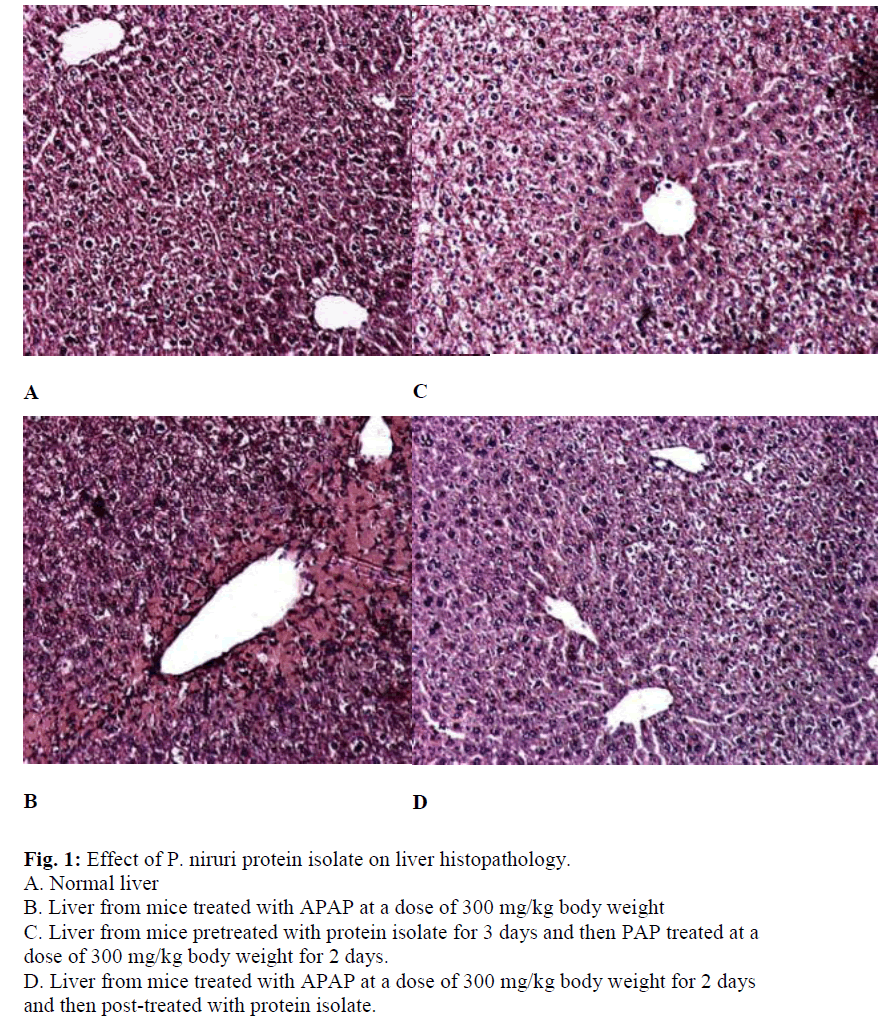 The liver is a major target organ for toxicity of xenobiotics and drugs as most of the orally ingested drugs pass through the liver and some chemicals are metabolized into toxic intermediate in the liver.

APAP is the most commonly used analgesic and antipyretic and is responsible for more hospitalization after overdose than any other common medication. APAP, when used in high doses, could cause potentially fatal hepatic necrosis [10]. There is general consensus that the formation of an electrophilic metabolite by the P450 system, presumably N-acetyl-p-benzoquinoneimine (NAPQI), is a prerequisite for the injury [11]. NAPQI is effectively detoxified by glutathione to form an acetaminophen-GSH conjugate. After a toxic dose of acetaminophen, total hepatic GSH is depleted [12]. However, after the cellular glutathione stores are depleted, the reactive metabolite covalently binds to a substantial number of cytosolic and mitochondrial proteins [13]. As a consequence, impaired mitochondrial respiration [14], depletion of hepatocellular ATP levels [15], and release of cytochrome c from the mitochondria [16,17] are observed.

The present study demonstrates that the protein isolate of the herb P. niruri has vital hepatoprotective properties against hepatic damage induced by the drug APAP. In our study we treated the mice with APAP at a dose of 300 mg/kg bodyweight. We observed that this resulted in severe hepatic toxicity as evident from the increased levels of liver marker enzymes GPT and LDH. Moreover, APAP treatment reduced hepatic levels of GSH, which is required for the detoxification of NAPQI and induced centrilobular necrosis in liver as evident from histopathological studies. In order to elucidate the protective role of P. niruri, we examined both the preventive and curative role of the protein isolate of P. niruri against APAP induced hepatotoxicity in mice. It was observed that the protein isolate was able to reduce the increased levels of liver marker enzymes GPT and LDH, significantly. Moreover, it increased the depleted levels of cellular GSH. In histopathological studies, damage around the lobular region of the liver from protein isolate treated mice liver before and after APAP administration was less severe compared to that with APAP alone.

In conclusion, the proteins present in P. niruri could be used as a protective agent against APAP toxicity. Further works are needed to fully characterize the protein(s) present in the herb and elucidate its possible mode of action and that is in progress.

The work has partly been supported by the Council of Scientific and Industrial Research, Government of India (a Grant-In-Aid to PCS, Scheme Number: 01(1788)/ 02/EMR-II). RB acknowledges the receipt of CSIR ad hoc fellowship. We would like to thank Mr. Prasanta Pal for his technical assistance.