Tripterygium Glycosides (TG) are extracts obtained from a traditional Chinese medicine with immunomodulatory and anti-tumor effects; because the incidence and severity of side effects following TG administration are much lower than those of immunosuppressive agents, TG has been widely used in the clinical treatment of kidney diseases or rheumatism. Rational application of TG may significantly reduce the amount of immunosuppressive drugs required for therapy, thus greatly reducing medical costs and side effects as well as increasing patient compliance. Based on extensive applications and studies of TG, TG was observed to cause damage to the female gonad and ovarian functions [1]; therefore, its application in female patients before and in childbearing age has been extremely limited. It is important to minimize the side effects of TG, which would have important clinical and social effects.

Gonadotropin-releasing hormone agonist (GnRH-a) [2,3] is a synthesized gonadotropin-releasing hormone and is a preferred ovarian function-protecting agent in chemotherapy [4-6], and thus has been widely used in clinical practice [7]. The synthesized analog of GnRH, Triptorelin (TRI), has the same effects as GnRH [8]. Early in the first administration, GnRH agonists completely bind GnRH receptors on the surface of the pituitary gland, stimulating the transient increase of Follicle- Stimulating Hormone (FSH) and Luteinizing Hormone (LH) (the "ignition" period) [9]. Approximately 15 d later, the receptors become exhausted and are no longer sensitive to GnRH-a; thus, FSH and LH begin to decrease significantly and ovarian hormones begin to significantly decrease to postmenopausal levels. Therefore, artificial menopause can occur and protect the ovaries.

This study was performed to observe and compare the changes in the estrous cycle and morphologies of ovarian tissues in Kunming mice after administration of TRI and TG; additionally, changes in serum anti-Mullerian hormone (AMH) [10], FSH, LH, and estradiol (E2) were detected to investigate the protective effects of GnRH against TG-induced ovarian dysfunction in female mice and develop ovarian functionprotective protocols for effective application of TG.

Thirty healthy, female Kunming (KM) mice, 7-8 w old, weighing 32-36 g, and clean-grade, were provided by Shanghai Slaccas Experimental Animal Co., Ltd. (Shanghai, China). After 1-2 d adaptive feeding, all mice were subjected to the smear method to collect vaginal exfoliated cells, and those with a normal estrous cycle were selected for the study. This study was carried out in strict accordance with the recommendations in the Guide for the Care and Use of Laboratory Animals of the National Institutes of Health. The animal use protocol has been reviewed and approved by the Institutional Animal Care and Use Committee (IACUC) of Zhejiang Chinese Medical University.

All mice were sacrificed during w 11 to detect blood AMH, FSH, LH, and E2, calculate the ovarian index, and observe the morphologies of ovarian tissues. The best protocol was then screened.

From the first day of the experiment, the general conditions of mice in each group were observed and recorded, including spirit, activity, fur, food intake, water intake, appetite, urine, and stool; their body weights were determined weekly.

The estrous cycle in mouse is approximately 4-5 d, including diestrus, proestrus, estrus, and metestrus. This study used a relatively simple smear method of vaginal exfoliated cells to observe the estrous cycle.

All mice were sacrificed during w 11 and blood samples were obtained using the eyeball enucleation method to detect the serum levels of AMH, FSH, LH, and E2 by ELISA.

The abdomen of each mouse was then cut open to obtain the ovaries, which were first weighed to determine the wet weight using an electronic analytical balance, followed by calculation of the ovary index=ovary wet weight (mg)/mouse body weight (g) × 100%. Ovaries were then fixed with 4% paraformaldehyde, followed by paraffin-embedding, serial slicing, drying, and hematoxylin and eosin staining; the numbers of different-stage ovarian follicles were observed and analysed under a microscope. 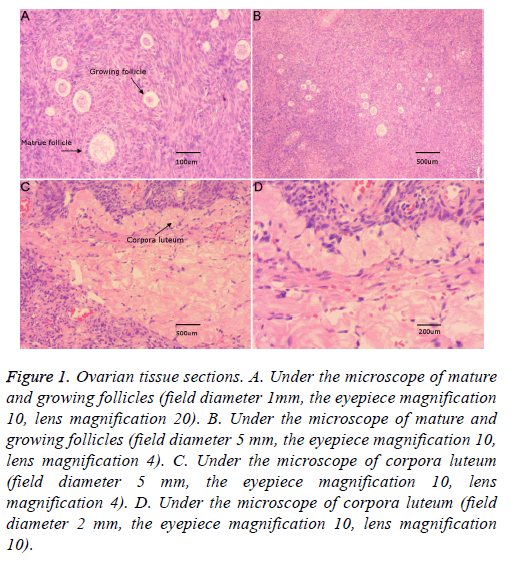 All data were analysed with SPSS statistical software (SPSS, Inc., Chicago, IL, USA). Differences among groups were detected using the Student-Newman-Keuls method. Categorical data were analysed using variance analysis, and the homogeneity test of variance was performed. All results are expressed as the mean ± standard error of the mean. Statistical significance was accepted at P<0.05.

After one week of feeding, mice in group B showed significantly reduced activities and the amounts of food and water intake gradually reduced; after continuous feeding, the mice exhibited overall edema. However, mice in groups A and C exhibited better performance with lustrous fur, flexible activities, and increased food and water intake. The performance sorting of the three groups was as follows: group C>group A>group B.

Table 1. Comparison of body weights among the three groups.

Table 1. Comparison of body weights among the three groups.

Tripterygium wilfordii is a woody climber with a bitter taste, cold nature, and an effective poison, but can promote blood circulation and remove meridian obstruction, dispel wind, eliminate dampness, kill worms and detoxify, and relieve swelling and pain. It has multiple bioactivities such as antitumor and anti-immune effects. TG is a group of bioactive substances extracted from T. wilfordii root fragments and is commonly used clinically to treat toxin and rheumatisminduced autoimmune diseases such as nephrotic syndrome and rheumatoid arthritis. However, its side effects have gained increasing attention, particularly those on the reproductive system. Short-term usage can cause menstrual cycle disorders in young women, and long-term usage may cause complete amenorrhea. According to previous studies, at doses greater than 800 mg, the incidence of amenorrhea was as high as 95%.

The dosage and medication timing when using TG to establish mouse models with follicular developmental disorder and ovarian dysfunctions are not standardized; in this study, we orally administered 0.35 mL of TG solution at 50 mg/(kg•d) per day.

The results showed that after oral administration of TG solution, the mice exhibited poor general conditions and their estrous cycles were disturbed; the levels of FSH and LH increased, while the levels of AMH and E2 decreased. Mouse body weights and ovarian indices significantly decreased; the numbers of ovarian follicles, mature ovarian follicles, and corpus lutea were reduced, clearly indicating the reproductive toxicity of TG in mice. When endocrine disorders and ovarian follicular development disorders occur and the numbers of follicles and mature ovarian follicles are reduced, normal ovulation is affected. Thus, TG significantly disrupted mouse sex hormones and reproductive organs (ovaries).

TG brings new challenges to gynecological clinical practice for treating diseases. Therefore, predicting women’s ovarian functions during treatment is an important research topic [12]. Currently, commonly used clinical methods include using estrogen and progestin for intervention during TG treatment to maintain the efficacies of TG, while also protecting ovary and other reproductive organ functions, thus avoiding or reducing TG-induced premature ovarian failure and other side effects. However, long-term use of estrogen and progesterone also has some risks, such as migraine or frequent and abnormally severe headache, increased incidences of arterial and venous thrombosis, dementia, or breast cancer. Therefore, new, effective, and safe ovarian protective agents are urgently needed.

Gonadotropin-Releasing Hormone (GnRH) is a 10-peptide hormone secreted by hypothalamic neurons. It stimulates the release of FSH and LH in the pituitary gland, promotes the secretion of estrogen and progesterone in the ovary, and promotes the development and maturation of follicles. GnRH analogs include gonadotropin-releasing hormone antagonists and GnRH agonists (GnRH-a) [13]. GnRH-a has been widely used in the clinic in recent years. GnRH agonist administration after all receptors, the pituitary is not sensitive to GnRH, FSH, LH secretion decreased significantly, ovarian hormone levels also decreased significantly, to appear artificial menopause, menopause, and to protect the ovarian function.

GnRH-a significantly protects against the toxic effects of chemotherapy drugs in the ovaries [14]. In a long-term clinical follow-up study of 240 children younger than 15 years who received chemotherapy to treat Hodgkin disease, only 13% of girls showed premature ovarian failure, while the percentage of boys with aspermia was as high as 83%. These results indicate that ovarian functions before puberty are less affected by chemotherapeutic drugs; studies attempted to create a temporary preadolescence environment for women of childbearing age before chemotherapy to protect ovarian functions. As early as 1985, Ataya observed that long-acting GnRH-a TRI could protect against cyclophosphamide-induced ovarian damage in a rat model [15]. Subsequently, Yuan and Meirow confirmed the above conclusions in animal experiments [16], showing that GnRH-a could protect rat ovarian functions, save most of the primary follicles, and thus prevent quiescent follicles from damage caused by chemotherapeutic drugs [17,18]. Numerous clinical studies have confirmed that GnRH-a protects ovarian functions in patients from chemotherapy-induced damage [19,20].

Based on the above findings, TG-induced reproductive toxicities can be prevented by GnRH agonists to protect ovarian functions. The TRI used in this study was a synthetic GnRH analog, the structure of which was modified by replacing the sixth L-amino acid (glycine) in the natural molecule with D-tryptophan. TRI has the same effects as GnRH; however, because of its longer plasma half-life, it exhibits stronger affinity to GnRH receptors.

In this study, considering the effects of GnRH-a and that the mouse estrous cycle is 4-5 d, TRI was administered one week before this cycle and then co-administered with TG one week later. The results showed that the mice had lustrous fur, flexible activities, increased food and water intake, and body weight increase. FSH and LH were reduced, while AMH and E2 increased; the numbers of ovarian follicles and mature ovarian follicles increased, indicating that TRI significantly inhibited TG-induced reproductive toxicity, thus better protecting the development and maturation of growing follicles inside the ovaries.

TG can cause pathological conditions in the reproductive system of mice and significantly damage mouse hormone and reproductive organs. TRI protects against TG-induced gonad and ovarian dysfunctions in female mice. However, this study had a small sample size, and thus may not reflect overall changes; in addition, the administration timing and dosage require further analysis. Therefore, prospective, multi-center, and large-sample size studies are needed.