Objective: This paper investigated the effects of Kuntai capsule on rat ovarian function of frozen-thawed transfer.

Methods: 85 female C57BL/6 mice are selected for this study. 17 of the mice are marked as the Normal Control group (NC). The rest of 68 are selected to set a novel accelerated aging ovary model via superovulation then via randomly separating the mice into four equal groups. One group is marked as Model Group (Mod). Other three groups are intragastrically administered with high (1.5 g/kg), middle (1.0 g/kg) and low (0.5 g/kg) dosages of Kuntai capsule every day for 3 weeks. Ovarian function is appraised via sex hormone level experiments.

Conclusions: This study created a new model for investigating the effects of Kuntai capsule on rat ovarian function of frozen-thawed transfer. These results suggest that superovulation may create a new model. More importantly, Kuntai capsule may regulate the anti-apoptosis pathway to protect the growing follicular quality, allowing recovery of the endocrine and reproductive ability of the aging ovary.

With the increase in women’s life-expectancy, a growing number of women will spend nearly 30% of their lives in a state of menopausal [1]. During menopause, the drastic decline of estrogen production can lead to a decrease in life quality, including various perimenopausal and post-menopausal symptoms and pathologies [2-4]. Thus, many women use hormone replacement therapy to relieve climacteric symptoms and ameliorate their life quality. However, increasingly more studies have challenged the safety of HRT, citing the risk of venous thromboembolism or coronary event, breast cancer, stroke and gallbladder disease [5].

HRT is the primary management of menopausal symptoms in Western medicine. However, the potential adverse effects drive the clinicians to actively seeking alternative therapies. Among the alternative treatments, Chinese medicine, such as Kuntai capsule, may give them a better solution and fruitful area [6]. Kuntai capsule, a TCM herbal formulation, has been highly applied to treat menopausal syndrome for a long time, which is a compound preparation of six Chinese herbs, prepared rhizome of Adhesive Rehmannia, Coptis Chinensis Franch, White Paeony Root, Scutellaria Baicalensis, Colla Corii Asini and Wolfiporia Cocos [7-12]. Recently, lots of trials in China have proved that Kuntai capsule has significant and positive effects in allaying menopausal symptoms in Chinese women [13-15].

This paper will establish a new ovarian aging acceleration model to induce a decline in both the quantity and quality of the oocytes and was designed to evaluate the effect of Kuntai capsule on damaged ovarian function and identify its possible mechanisms on menopausal syndrome.

Female F1 hybrid mice are obtained from female C57BL/6 and male CBA/Ca mice copulation under followed conditions: lighting (13 L: 10 D), temperature (19°C-23°C), and humidity (42%-61%). Pre-pubertal 2 week old F1 female mice are applied for recovery of the ovaries in this paper. Reasonable management of experimental samples and quality management, control of the laboratory equipment’s are made.

The ovaries gained from donor mice are sectioned for 0.7 to 0.8 × 0.2 to 0.3 × 0.1 mm in size and then are cryopreserved via a noval method of Gosden et al. [16]. Briefly, they were suspended in L-15 medium containing 10% (v:v) foetal bovine serum and 1.5 M DMSO on ice then placed individually into the middle of a 0.5 mL plastic straw using a small volume of medium.

After being sealed with straw powder, the straws were placed in a programmable freezer pre-cooled to 5°C for 35 min. The slow-freezing procedure was as follows: cooled at 1°C/min to -7°C and held for 6 min, seeded manually, held at -7°C for 12 min, and cooled to -30°C at 0.3°C/min. The straws were then exposed to liquid nitrogen vapour for 5 min and stored in liquid nitrogen for up to 3 min. To thaw, the straws were placed on a warm plate at 37°C for 30 sec and the ovaries were removed.

The cryoprotectant was removed by serial dilutions of the cryoprotectants with one or more washes in medium, which could avoid rapid osmotic processes in the cryopreserved tissue. After removing cryoprotectant, the thawed ovaries were washed repeatedly in L-15 medium containing 10% (v:v) FBS at 37°C before experimental treatment.

The novel models with accelerated aging ovaries are randomly grouped into 4 groups (n=17 per group): the Model Control group (Mod) and the groups treated with low, middle and high doses of Kuntai capsule (Low, Mid and High). Kuntai capsule (Low, Mid and High) was intragastrically administered at a dosage of 1.5 g/kg, 1.0 g/kg and 0.5 g/kg per d, respectively, for 3 consecutive weeks. The Mod group was injected with the identical volume of physiological saline. Healthy mice with no treatment were considered to be the Normal Control group (NC).

Blood samples are gained from sterile, non-heparinized tubes from non-pregnant mice at diestrus of the estrous cycle. The blood samples are carried out for centrifugation at 3200 rpm for 4 min, and serum is gained and stored at -80°C until for analysis. Levels of serum enzyme immunoassay for 17 β- estradiol (E2) and progesterone (P) were measured by Enzyme- Linked Immune Sorbent Assay (ELISA) according to the manufacturer’s instructions (Cayman Chemical Company, Ann Arbor, USA).

Effects of Kuntai capsule on body and ovarian weights

All of the mice were alive after treatment, and before treatment, there is no significant differences observed in body weight of the mice in various groups (P>0.05). During the treatment process, the NC group rapidly outweighed the Mod group (P<0.05), which is shown in Figure 1. The low (Kuntai capsule) group gained weight in a manner similar to the Mod group. However, the mid and high groups had body weights similar to the NC group after three week’s treatment (Figure 2). 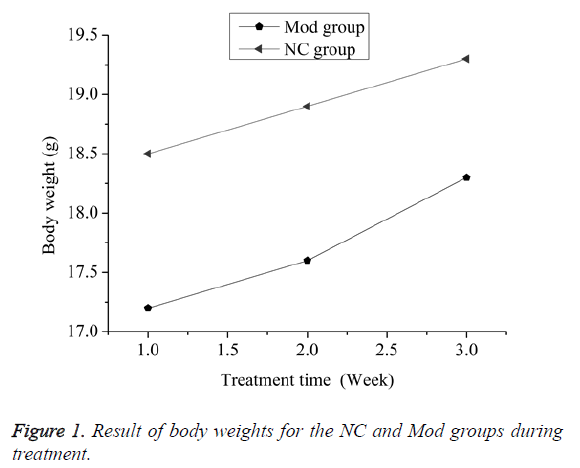 Figure 1: Result of body weights for the NC and Mod groups during treatment. 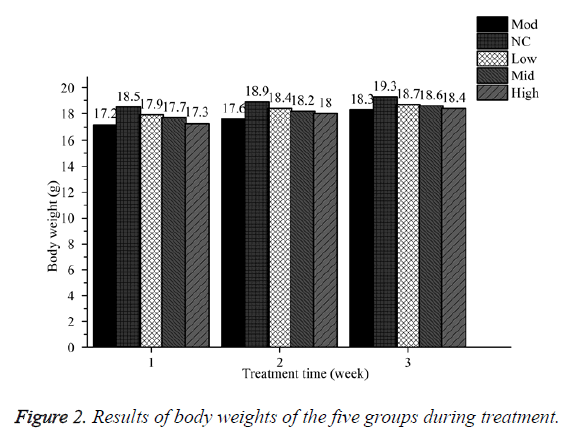 Figure 2: Results of body weights of the five groups during treatment. 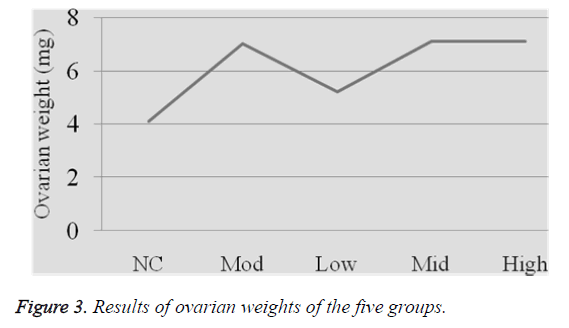 Figure 3: Results of ovarian weights of the five groups.

A significant decrease was observed in the level of estradiol (E2) (P<0.05) and progesterone (P) (P<0.01) of the Mod group compared with the estradiol of the NC group, and the Mod group showed the lowest E2 level of all the groups.

There was no significant change in the P level between the Low (Kuntai capsule) and Mod (P>0.05) groups. However, compared with the Mod group, the P levels of the mid (P<0.05) and High P<0.01) groups increased significantly, similar to the NC group (Figures 4 and 5). 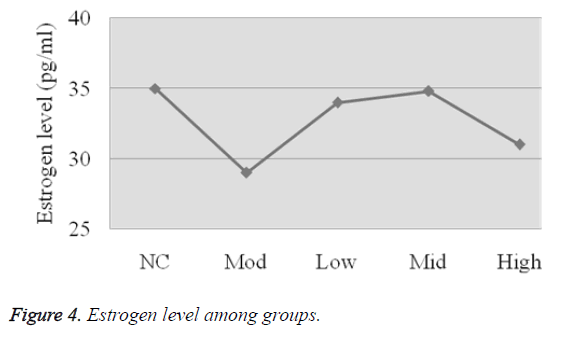 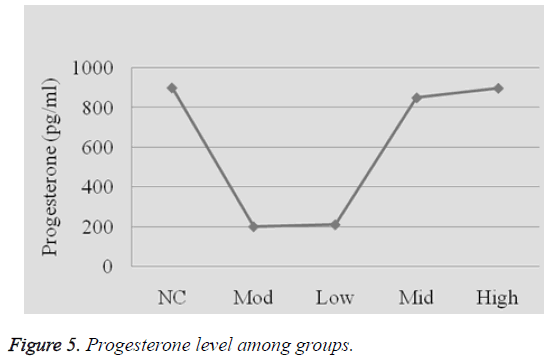 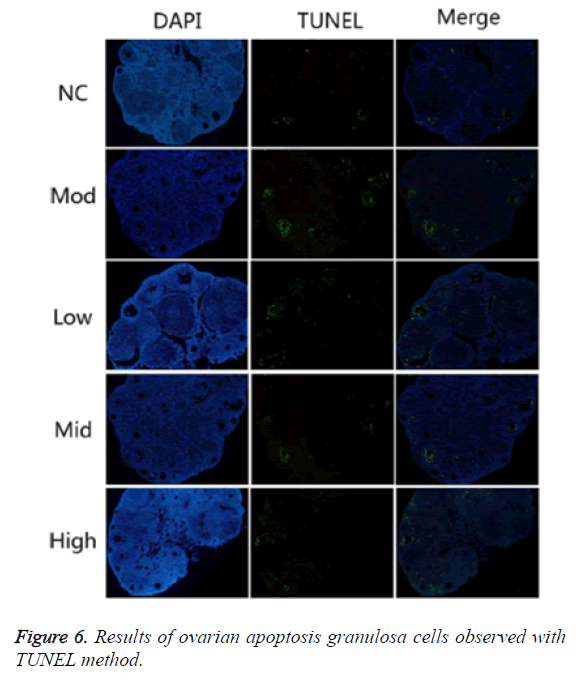 As one of the most frequently used experimental animals, folliculogenesis in the mice is comparable to folliculogenesis in humans. Moreover, mice oocytes have radiation resistance comparable to that of humans, which provides a better model [17,18]. Therefore, the mouse is a useful animal model to study ovarian follicular development and oocyte maturation in relation to radiotoxicology. However, there are few reports about ovarian cryopreservation of this species [19].

The ovaries present an age faster comparing with other body systems, and ovarian age faster is characterized by gradual declines in quantity and quality of ovarian follicle [20-22]. In this study, both the primordial follicle pool and oocyte quality decreased significantly in the model mice, consistent with the characteristics of ovarian aging. Previous research revealed that the decrease in numbers of follicle indicates the onset of irregular cycle and the final stopped menstruating whereas the decline in follicle quality leads to the gradual deterioration of fertility. In this study, the Mod group displayed low hormone levels with the NC group. All of these results indicated that the Mod group displayed the ovarian aging phenomenon. As a part of the whole, accelerated aging of the ovaries will follow other organ aging and even present constitutional symptoms. In this study, Kuntai capsule treatment improved the body weight, indicating that Kuntai capsule may improve the symptoms caused by accelerated aging of the ovaries.

Ovarian function is primarily reflected in endocrine and reproductive functions. Current evidence suggests that late in the process of ovarian aging, the E2 level decrease relative to the process and the P level does not change significantly [23]. In this study, the Mod group showed a decrease in both E2 and P levels compared with the NC group. However, the Kuntai capsule groups more or less raised those levels.

Menopause results from ovarian aging, and the aging process of ovaries is characterized by a gradual decrease in both the quantity and quality of the oocytes [24]. According to some studies, the many primordial follicles formed during the development of an embryo inevitably decline as women age and drop below 1000 approaching menopause. In addition to the decrease in follicles, oocyte quality also diminishes with age. The results of daily metabolic processes, the metabolic products are supposed to be a primary cause of ovarian aging.

Kuntai capsule, reducing pathogenic fire, stabilizing the mind, eliminating worries and regulating Yin and Yang, which could effectively relieve menopausal symptoms. In recent decades, Kuntai capsule has been used in clinics for alleviating menopausal symptoms and has had no apparent estrogenicity for decades. Recent clinical investigations have also suggested that Kuntai capsule can effectively ameliorate low estrogen levels caused by the add-back therapy of gonadotropinreleasing hormone agonist for endometriosis.

More and more young women can survive with cancer because of the progress of medicine. Therefore, the main goal is to protect the reproductive potential of cancer patients before treatment-induced infertility [25]. Currently, not only older women suffer from ovarian aging; many young women are also being diagnosed with Premature Ovarian Failure (POF), frequently expressed as vexation, insomnia and possible sterility. Therefore, it would be a significant benefit to identify an effective manner with which to ameliorate the symptoms of ovarian aging. This study indicated that Kuntai capsule may have beneficial effects on accelerated aging of the ovaries, which leads to various health consequences, including mood disorders, vasomotor symptoms, cardiovascular disease, osteoporosis, sexual function, cognition, depression, and vaginal atrophy.

Kuntai capsule has been used in treating perimenopausal syndrome and polycystic ovary syndrome for lots of years. This study created a new model for rat ovarian function of frozen-thawed transfer based on the findings that the primary factors in menopause are ovarian aging and the decline in both the quantity and quality of the oocytes. These results suggest that Kuntai capsule may recover the endocrine and reproductive ability of the aging ovary.