Objective: This research was aimed to build ischemia-reperfusion model of rats in vivo , and observe the effects of different degrees of acidification pre-treatment of respiratory acidosis on lung ischemiareperfusion injury.

Protective ventilation strategy is applied to clinics widely to improve patients’ prognosis by relieving ventilator-induced lung injury. Darioli comes up with hypoventilation method that can lower death rate of patients with severe asthma obviously. After that, hypoventilation treatment can lower death rate obviously which is demonstrated by lots of basic and clinical experiments [1]. This ventilation method is called as permissive hypercapnia (PHC). This ventilation method provides the patients with hypercapnia (HC) in a certain degree to lower the death rate and lung injury. According to Protective ventilation strategy to PHC, the proper increase of partial pressure of carbon dioxide in artery (PaCO2) has been accepted by clinics [2]. The traditional view that its protection function has relation with lung tension which is lowered by hypoventilation. This ventilation strategy only can lower lung injury by relieving mechanical injury caused by lung traction, which has no relation with hypercapnia itself. After that, Shibata and others found that hypercapnia can lower permeability of lung capillary and injury of oxygen free radicals [3]. Laffey et al. also found that this protection appears after carbonic acid toxication, which is caused by alkaline drug and low tidal volume ventilation [4]. This suggests that acidification is the key factor of protection for lung injury of PHC. The study shows that exogenous increased carbon dioxide (CO2) can promote PaCO2, which is regarded as therapeutic HC [5]. Comparing with exogenous inhalation CO2, endogenous CO2 increases by regulating respiratory frequency rate, it is also respiratory acidosis, which is more easily to be operated and controlled. This research is to study the protection function and mechanism of respiratory acidosis pretreatment of respiratory acidosis on Lung Ischemia- Reperfusion Injury (LIRI). Before lung ischemia-reperfusion (I/R), lung is pretreated by different degrees of respiratory acidosis through respiratory frequency rate regulation. The protection of this method is detected for lung I/R, which can provide simple and effective method for clinical lung I/R, and be applied to clinics conveniently.

50 Sprague-Dawley (SD) male rats with weight of 250 to 300 g were selected. Rats were randomly divided to the five groups, each group 10 cases [6]. First, I/R group, 10% 5 ml/kg chloral hydrate was given intraperitoneal injection for anaesthesia.

Trachea cannula was connected with animal respirator. Remifentanil with 0.1 μg kg-1 h-1 rate for anesthetic maintain was pumped into vein. Cisatracurium for maintaining muscle relax was injected into vein after 40 m. 0.9%, 0.5 ml h-1 sodium chloride injection was injected into vein. Rat’s experimental model was built by refering to Eppinger method [7]. Chest was opened at fifth intercostal space of left prothorax. Hilum of left lung was dissociated. 50 μ hepkgarin was diluted to 500 U. Then it was injected into caudal vein (Figure 1). Hilum of left lung was closed by using noninvasive micro vascular clip in 10 m at the end of lung fullness. It was loosened after 45 m and given reperfusion for 180 m. Second, left hilum of left lung in the sham operation group was associated after opening chest, no given other managements. Third, after association of hilum of left lung in pretreatment group, respiratory parameters were regulated. Partial pressure of carbon dioxide in end expiratory gas (PETCO2) reached to PETCO2 in pretreatment L group, 56-65 mm Hg in pretreatment group M group and 66-75 mm Hg in pretreatment group H group for 5 m. Then it was disposed as I/R group. After sample selection and experiments, 2 ml blood sample was extracted by using 5 ml. Tissue of left lung were taken off after opening chest cavity. 10 ml Normal Saline (NS) were injected into left lung bronchus for three to four times of washing. 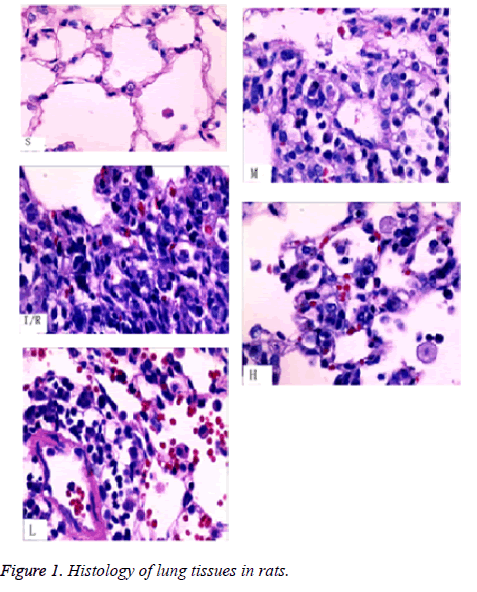 The pressure was not over 15 Hm H2O. Injection volume was not over 3 ml every time. Perfusate was recycled into centrifugal tube. The level of Total Protein (TP) was extracted from Broncho Alveolar Lavage Fluid (BALF). Blood sample should be placed under normal temperature. Then it was given solidification and centrifugation with 3500 r/m. Liquid supernatant was collected. Then it was placed into lowtemperature refrigerator of -80°C for conservation (interleukin-8 and interleukin-10 were disposed according to enzyme-linked immunosorbent assay (ELISA) kit from Hengyuan biotechnology development limited company of Shanghai). Samples of lung tissue were selected, and divided into three parts. One was used to detect wet to dry weight ratio of lung. Another was placed into refrigerator for conservation. Malon Di Aldehyde (MDA) and Superoxide Dismutase (SOD) were detected (according to kits from Jiancheng biotechnology limited company of Nanjing). Another was soaked into 10% neutral formalin, fixed and embedded with paraffin. Pathological section was made by Haematoxylin-Eosin (HE) staining.

Ethics committee approval was obtained from the Institutional Ethics Committee of the first affiliated hospital of Nanchang University to the commencement of the study.

LIRI can induce lung ischemia caused by many reasons (heart arrest, cardiopulmonary bypass and lung implant). Tissue recover to blood perfusion after ischemia factors appearing. Injury of cell and tissue is not relieved, but more severe. The mechanism is not very clear until now. Nowadays, the study shows that release of inflammatory medium, outburst of oxygen radical, injury of endothelial cells have important functions in LIRI [20]. Injury of endothelial cells is LIRI characteristic lesion. The main manifestations are dilation of lung capillary, rupture of epithelial cellular wall in alveoli, which increase permeability of endothelial cells and make water and protein of vessels exudation, cause migration and aggregation of inflammatory cells. Finally pulmonary edema is induced. Respiratory acidosis pretreatment for LIRI, the results of pathological section shows that, the structure of I/R tissue is not clear. Lots of inflammation cells exudated from alveolar cavity, mesenchyma and bronchial cavity. The edema is obvious. Septum of alveoli is damaged. Pretreatment L, M, H groups compared with I/R group, edema of alveoli, mesenchyma and inflammatory infiltration relieve obviously.

In summary, our findings point to an important role for protection of acidification pretreatment of respiratory acidosis on lung ischemia-reperfusion injury. These results may open new therapeutic strategy for the management of lung I/R.