The perception of the visual environment plays the most prominent role for athletes of some sports types. Saccades are the fastest movements of eye balls to launch the image of any peripheral visual object to fovea. Some researchers previously reported that athletes have better saccadic performance than non-athletes. We aimed to investigate prosaccadic and antisaccadic performances of athletes from various sports, which have different visual field changing velocities. Totally 40 male athletes were divided into four groups (tennis players, volleyball players, basketball players, swimmers), and each of them included 10 athletes. 10 non-athletes were formed as the control group. Our results indicated that tennis players and volleyball players had faster prosaccadic velocity than basketball players, swimmers and non-athletes groups. We found shorter antisaccadic latency in tennis, volleyball and basketball players than non-athletes. Swimmers’ antisaccadic latency values were significantly different from neither basketball players nor non-athletes. We considered from these findings that gaining experience in some branches may improve planning of voluntary saccades and prosaccadic velocity. These improvements are evident in fast ball game players such as tennis and volleyball.

In many types of sports, athletes are forced to recognize fastchanging visual field. Especially in fast ball games, the success of an athlete depends strongly on the power of determining the location of the ball and other players as quickly as possible. In some cases, athletes have to make a saccadic eye movement to the direction of a visual stimulus, yet sometime they have to move their eyes to another direction of visual stimulus. A visual object can be grabbed quicker by shortening saccade latency or increasing saccade velocity. A prosaccade is a saccadic eye movement towards a visual stimulus [1,2] and prosaccadic eye movements in athletes are reported to be faster than non-athletes [3-6]. A saccade to the opposite direction of visual stimulus is an antisaccade [1,2] and athletes are reported to have shorter latency than non-athletes [7]. These are not only advantages of the visual field scanning of athletes. Zwierko reported that handball players have better peripheral vision than non-players [8], and Piras et al. reported that experienced volleyball players use different scan strategies from novice ones [9]. In other words, despite the presence of lots of visual stimuli in their visual fields, superior athletes can achieve saccade to the right target at the right time. In order to achieve this, athletes must have strong suppression of prosaccades and faster preparation of voluntary [10]. Fischer and Weber reported that training leads to a shorter production phase of antisaccade [11]. On the other hand, Abernethy and Wood argue that visual training cannot provide improvements in either basic visual function or motor performance [12]. But some recent studies showed that visual training brings about enhancement of visual functions including saccadic eye movements [13].

Each sport has its own visual scene. In some sports, athletes face extremely fast changing visual scenes but in some sports they do not. For example, tennis players need faster scan of the visual environment [13] than other athletes such as swimmers. When the ball is moving fast, athletes have to make saccades to capture the image of the ball. Tracing an object moving with a velocity under 100 degree/sec is adequate to pursuit eye movement system [14]. In this situation, athletes need less voluntary saccades. It can be suggested that, the characteristics of any kind of sports may improve different eye movement control mechanisms of the athletes. In this study, we intend to find out prosaccadic and antisaccadic performances of athletes from various sports, which have different visual field changing velocities. The aim of the present research was to assess how tennis (where ball moves remarkably fast), volleyball (where ball moves relatively slower, but players should visually track of the opponent players), basketball (where a bigger ball is used, but the game is played more slowly, yet visual information is also beneficial) and swimming (where it is not critically needed to scan the visual scene) affected prosaccadic and antisaccadic performance.

Totally 40 male athletes were divided into four groups (Tennis players’ age, M=21.9 ± 1.4; volleyball players’ age, M=21.6 ± 1.6; basketball players’ age, M=22.1 ± 1.5; swimmers’ age, M=21.8 ± 1.2) and each of them included 10 athletes. 10 nonathletes (M=21.6 ± 1.4) were prepared as the control group. In this research, all participants did not have any sight problem and drug-free for the last 48 h. Athletes who hadn’t made regular exercises at least four years in their own branches excluded from the study. All of the participants accepted voluntarily to take part in this test. Test did not include any invasive or hazardous procedure.

The subjects sat in a dark, quiet room, and their heads stabilized in a headrest. Horizontal eye movements were recorded binocularly with using electrooculography (Biopack MP-30, filter: 0.05-35 Hz) at a 1000 Hz sampling rate. Surface electrodes were placed 1 cm laterally to the outer canthi with a reference electrode at the center of the forehead, after skin scarified.

Each subject faced in front of the panel at a distance of 200 cm away which included three visual Light-Emitting Diode (LED) targets (0.11 o in diameter): one of LED target was fixed at midline of the panel for the initial condition at zero degrees, and two of them were fixed at 15º to the left and the right side of central point. Before the test, the subjects stayed in a dark condition in the room for adaptation for about ten minutes.

Any anticipatory and reflexive saccade which did have latency shorter than 100 ms was not accepted for consideration. Looking at the target LED during antisaccade test was considered as antisaccade error. As a result of the elimination of any saccade record (due to blink artifact, antisaccade error, reflexive saccade, suspicious amplitude etc.) was made immediate after the recording, at least twenty clean pro and anti-saccades were recorded for each participant.

Statistical analyses were made by using one-way ANOVA test. Post-hoc analysis using Tukey procedure was performed to examine the different suggested by ANOVA.

Latency and velocity mean ± SEM values of pro and antisaccade of five groups are illustrated in Table 1. According to ANOVA results, there were significant differences among groups in antisaccade latency (f4,45=8.88; P<0.05) and prosaccade velocity (f4,45=10.74; P<0.05).

Table 1. Mean ± SE values of prosaccadic and antisaccadic latency and velocity of all groups. For each row, any values having the same letter are not significantly different.

In light of these results, there was no significant difference, in the comparison of antisaccade velocity or prosaccade latency, within groups by ANOVA. 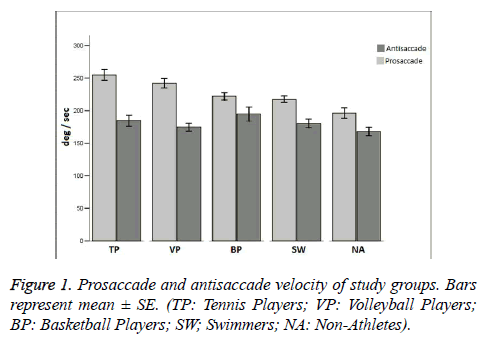 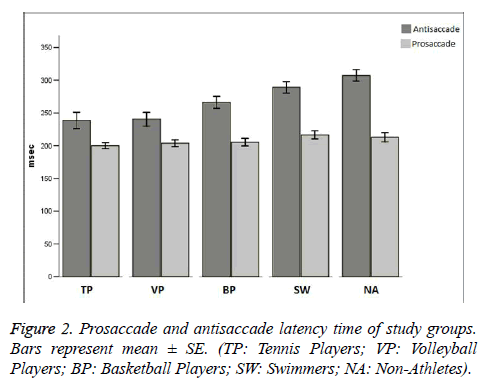 According to findings of the research, we could not find any difference in prosaccadic latency time among the research groups. This conclusion is supported and consistent with the evidence reported by Lenoir et al. [4], Fujiyawa et al. [15] and Babu et al. [16]. In a similar research, only Morrillo et al. [17] reported that professional shooters have shorter prosaccadic latency than the control group.

In conclusion, we suggest that some types of sports-especially critical need identification of the visual environment as quickly as possible-enhance saccadic system naturally. On this basis, we have the same opinion with Abernethy and Wood [12] that extra visual training is not necessary to enhance athletic performance.