Propofol anesthesia contributes to the postoperative cognitive dysfunction which affects around 20% of surgical patients. The underlying molecular mechanism for propofol anesthesia induced cognitive dysfunction is not clearly elucidated. In this study, cognitive function of adult mice which were repeatedly injected with propofol was assessed using water maze test. We found that 25 mg/kg and 50 mg/kg propofol significantly reduced the percentage of swimming time in target quadrant and number of platform crossings, and increased the distance of swimming path and escape latency. Previous studies reported that repeated propofol treatment inhibited the expression of phosphor-Erk in neonatal rats. To explore the influence of propofol on phosphor-Erk expression in prefrontal cortex of adult mice, Western blot was used in this study. The results indicated that expression of phosphor-Erk was decreased by injections of propofol (25 and 50 mg/kg). In addition, the expression of miR-34a, which could be regulated by phosphor-Erk, was upregulated by propofol. Finally, mice were simultaneously with propofol (25 mg/kg) and curcumin (20 mg/kg), a phosphor-Erk agonist. And we revealed that curcumin administration could attenuate cognitive dysfunction caused by propofol.

Postoperative cognitive dysfunction is regarded as impairments of cognitive functions, including recent memory, concentration, social integration, judgment and orientation during the period after surgery [1,2]. About 20% of surgical patients were influenced by cognitive dysfunction [3]. Although many factors are reported to be responsible for cognitive deficit, anesthetics play an important role [4,5]. Propofol (PRO) is the most frequently used hypnotic agent in clinics. PRO is a kind of GABAA agonist which could bind to the β-subunit of the GABAA receptor and slow the channel-closing time [6]. The molecular mechanism underlying PRO anesthesia induced cognitive dysfunction is still unclear.

Extracellular regulated kinase (Erk) is an important component of mitogen-activated protein kinase cascades [7]. Erk could affect many biological functions including apoptosis, neuronal differentiation and migration [8-10]. Growing evidence suggest that these kinases are key regulators of cognitive impairments [11]. For example, (-)-Epigallocatechin-3-gallate protects 3- mo-old C57BL/6J mice against high-fat- and high-fructose-induced cognitive impairments by modulating ERK/CREB/ BDNF [12]. Especially, researchers address that ERK regulate anesthetic-induced cognitive defects. For example, Xu et al. illustrate that artemisinin could ameliorate isoflurane-induced cognitive impairments through inactivating JNK signaling and the upregulation of ERK [13]. And the expression of Erk could be inhibited by neonatal administration of PRO [14]. These experimental data suggest that effects of JNK and ERK could possibly ameliorate propofol anesthesia induced cognitive dysfunction.

Many studies have revealed that neural functions could be modulated by microRNAs which are small non-coding RNAs constituted of about 23 nucleotides [15]. MicroRNAs binding to the 3’-UTR of the target mRNAs inhibit the translation of mRNAs [16]. Many microRNAs, such as miR-134, miR-212, miR-132 and miR-34a, have been proved to regulate synaptic plasticity, learning, memory and social behaviors [17,18]. They may participate in propofol anesthesia induced cognitive dysfunction.

MiR-34a, a member of miR-34 family, is a conserved microRNA located in the chromosome lp36.23 [19]. Mir-34a is highly expressed in the brain and takes part in many biological processes of central neural system, such as stem cell proliferation, neuronal differentiation, neuronal migration and apoptosis, fear memory and so on [19-21]. MiR-34a is proved to be of important for cognitive functions. For example, miR-34a knockout improves cognitive functions in 1-monthold and 12-month-old mice in an APP/PS1 background [22]. According to these data, we hypothesize that PRO result in cognitive dysfunctions through regulating phosphor-Erk and miR-34a.

Male C57BL/6 mice weighing 23-30 g at the time of testing were selected in these experiments. Mice were kept for at least two weeks in standard rodent cages in the room which is at a 12 h light/dark cycle (lights on at 6:00). And animals could be free access to food and water before the start of experiments. Phosphate buffered solution (PBS, 10010049) was purchased from Invitrogen (Shanghai, China).

The procedure of protein extraction from hippocampus and Western blot analysis was described as reported. [23]. Briefly, in order to anesthetize animals, mice were intraperitoneally injected with sodium pentobarbital (65 mg/kg) and then decapitated. The hippocampus was dissected in ice-cold normal PBS. PFC tissues were homogenized in RIPA buffer (Beyotime, Beijing, China) containing protease and phosphatase inhibitors (Dinguo, Beijing, China). After being sonicated, homogenates were put on ice for 20 min and centrifuged at 12000 rpm. Supernatants were collected and stored at -20°C. Cytosolic protein was separated on 10% SDS-PAGE gel. Then separated proteins were transferred to a PVDF membrane on the ice. And the PVDF membrane was incubated with blocking buffer for 2 h and then immersed in TBST containing rabbit monoclonal antibodies anti-Erk (#06-182; 1/1000) which was purchased from Millipore or anti-Phospho- Erk (#9101S; 1/1000) which was bought from Cell Signaling Technology. Immunobloting signals were assessed by using ECL system (Thermo Fisher Scientific, Rockford, IL, USA).

We used TRIzol reagent to extract the total RNA from PFC tissue, and used the NanoDrop spectrophotometer (Molecular Devices) to determine the integrity of total RNA. After synthesis of complementary DNA (cDNA) from mRNA using First Stan cDNA Synthesis Kit, SYBR Green (Dingguo, Beijing, China) was mixed with cDNA and miR-34a primers in a total volume of 20 μl. Forward and reverse primers of miR-34a were obtained from Ribobio Corporation (miRQ0017022-1-1). U6 was used as an internal reference. 2-ΔΔCt method was chose to determine the expression level of miR-34a.

All data here are shown as mean ± SEM. All statistical comparisons were done using a one-way ANOVA followed by Turkey's test. When p-value is less than 0.05, it is considered significant. All statistical calculations were implemented using Prism 5.0 (Graphpad).

In order to reveal the influence of PRO on the cognitive function of mice, we used Morris water maze to examine spatial learning and memory of animals in the different groups. As illustrated in Figures 1C-1F, three different concentrations of PRO (5, 25 and 50 mg/kg) were used in this study. Compared with control group, 25 and 50 mg/kg PRO significantly reduced percentages of swimming duration in the target quadrant in the 1st w (p<0.01). Moreover, 25 and 50 mg/kg PRO could remarkably decrease the numbers of platform crossings in the 1st w (p<0.01). 25 mg/kg and 50 mg/kg PRO also reduced percentages of swimming time in the target quadrant and numbers of platform crossings (p<0.01, p<0.01). In addition, PRO treatment (25 and 50 mg/kg) increased the distance of swimming path and escape latency in both 1st and 4th w (all p<0.05, Figures 1G-1J). Our results revealed that PRO treatment could result in cognitive deficits of mice (Figure 1). 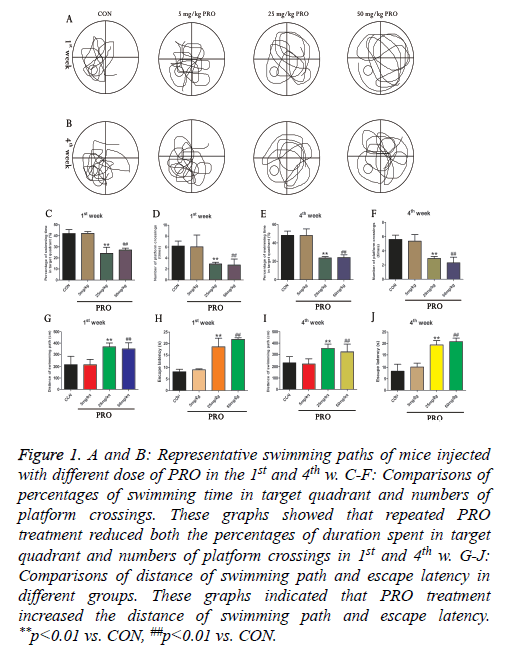 To investigate the molecular mechanism underlying PRO treatment induced cognitive dysfunction, the phosphor-Erk protein expression and miR-34a expression were assessed by Western blot and quantitative real-time PCR in this study. As shown in Figures 2A-2D, the injection of 25 mg/kg PRO reduced phospho-Erk protein level to about 0.68-fold of the control in the 1st week (p<0.01) and 0.63-fold of the control in the 4th w (p<0.01). Compared with saline-injected mice, 50 mg/kg PRO could also decrease the phosphor-Erk protein level in both 1st and 4th w after injections of PRO (p<0.01, Figure 2). 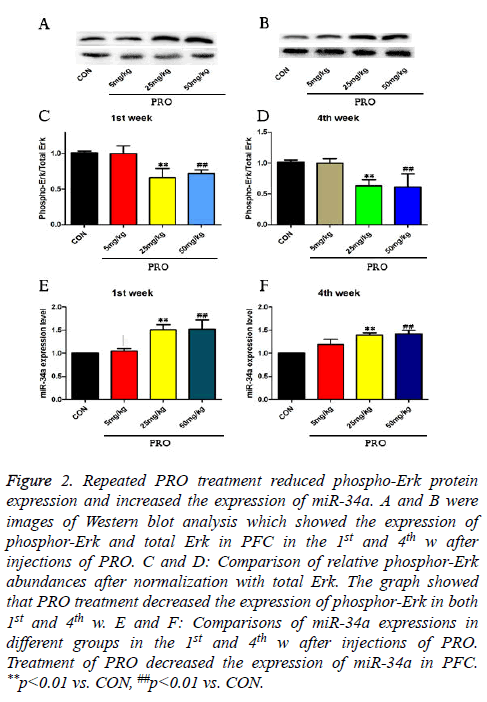 To examine whether PRO induced cognitive dysfunction was modulated by phosphor-Erk, mice were injected with 35 mg/kg PRO and 20 mg/kg curcumin. In PRO treated group, the percentage of swimming duration in target quadrant was reduced by PRO treatment, while application of curcumin remarkably alleviated the trend. At the same time, 20 mg/kg curcumin reversed the decreased number of platform crossing which was caused by injections of PRO. These results addressed that activation of phosphor-Erk could attenuate the cognitive dysfunction caused by PRO treatment (Figure 3). 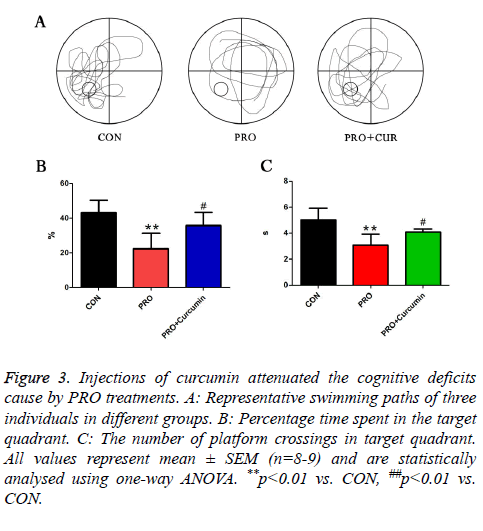 Figure 3: Injections of curcumin attenuated the cognitive deficits cause by PRO treatments. A: Representative swimming paths of three individuals in different groups. B: Percentage time spent in the target quadrant. C: The number of platform crossings in target quadrant. All values represent mean ± SEM (n=8-9) and are statistically analysed using one-way ANOVA. **p<0.01 vs. CON, ##p<0.01 vs. CON.

In many previous studies, researchers have revealed that the administration of PRO played a critical role in the impairment of cognitive function. Many factors have been demonstrated to contribute to the cognitive deficits, such as PRO-induced cell apoptosis, connecting to the GABAA receptor βsubunit and the prevention of acetylcholine [24]. However, to our knowledge, it is the first time to associate the down-regulation of phosphor- Erk in PFC with cognitive deficits of adult mice caused by PRO anesthesia. To further test our hypothesis, curcumin, a phosphor-Erk agonist, was used to activate phosphor-Erk. Compared with the PRO-injected group, the percentage of swimming duration in target quadrant and number of platform crossings were reversed by the curcumin administration. Previously, several studies have demonstrated that the expression of phosphor-Erk could mediate cognitive deficits caused by anesthetics [25]. For example, Yuan et al. reported that the expression of phosphor-Erk was down-regulated by isoflurane in neonatal rats; Huang et al. addressed that the neonatal administration of propofol could decrease the expression level of phosphor-Erk in the postnatal day 7 rats [14,26]. These reports were consistent with our data and supported our hypothesis.

MiR-34a is highly expressed in the PFC of mice. MiR-34a could regulate many neural functions including cognitive function [27]. Our results indicating that miR-34a expression was negative association with cognitive dysfunction caused by PRO administration were consistent with other researches. For example, Zhang et al. reported that miR-34a gene silencing could ameliorate the spatial cognitive deficit and improve hippocampal neurogenesis in the rodent model of type 1 diabetes mellitus [28]. Jiang et al. reported that it was miR-34a that negatively modulated ketamine-induced decline in memory in C57/BL6 mice [29].

In conclusion, the in vivo results of our study addressed that repeated treatment with PRO impaired spatial learning and memory in mice. The molecular mechanism was related to down-regulation of phosphor-Erk and up-regulation of miR-34a in PFC in mice. Possibly, our research may supply a new therapeutic target for propofol induced cognitive dysfunctions.

All the authors declare that there are no conflicts of interest.