Objective: Small-Cell Lung Cancer (SCLC) constitutes about 15% of all lung cancers. It tends to frequently metastasize to the brain. Prophylactic Cranial Irradiation (PCI) is performed, when the penetration of chemotherapeutic agents to brain is insufficient. The aim of this study was to report our single-center experience with PCI in SCLC cases.

Methods: We retrospectively reviewed 28 patients with SCLC diagnosed between March 2007 and November 2016. Cranial Computed Tomography (CT) or Magnetic Resonance Imaging (MRI) was performed from all patients to exclude metastasis before PCI. Radiation Therapy (RT) was conducted using two different instruments: a three-dimensional conformal RT-based Linear Accelerator (LINAC) instrument was used until 2013 and an Intensity-Modulated Radiation Therapy (IMRT) thereafter. All patients were treated with a total of 25-36 Gy with fraction doses of 2-2.5 Gy. Overall survival was estimated in all patients.

Results: The mean age was 56 (range: 36 to 72) y. Only one of the patients was female, while the remaining patients were all males. Twenty two patients (78.5%) were in limited stage SCLC, while six patients (21.5%) were in the extensive stage. Seventeen patients died, while 11 of them survived. The mean survival was 35 months, while it was 40 months for limited stage and 17 months for extensive stage (p=0.027). One, two, and five-year OS rates were 81.4%, 58%, and 17%, respectively. Four (14%) patients developed brain metastasis during follow-up. Of these patients, two were treated with Whole Brain RT (WBRT), one with Stereotactic RT (SBRT), and the other with best supportive care.

Small-cell Lung Cancer (SCLC) constitutes about 15% of all lung cancers [1]. SCLC is characterized by rapid doubling time, early metastasis, high sensitivity of chemotherapy and Radiation Therapy (RT) [2,3]. Only 30% of patients have presented with limited disease at the diagnosis [4]. Chemotherapy improves short-term survival. However, long-term survival outcomes are still disappointing. The median survival time is around 17 months for limited stage (LS)-SCLC patients while it is 9-10 months for extensive stage (ES)-SCLC patients [5,6].

In addition, SCLC tends to frequently metastasize to the brain. About 10% of patients present with brain metastasis at the time of diagnosis, while the cumulative risk increases to 50% or more within two years [7]. This rate increases up to 65% in autopsy series [8]. Brain metastasis is a life-threatening condition which reduces the quality of life and survival. The survival after brain metastasis is about four to five months [9]. Since the intact blood-brain barrier does not allow the passage of many cytotoxic agents, the brain is a hidden area for adjuvant systemic therapies [10]. Therefore, PCI has come to the agenda. PCI was first performed to treat children with Acute Lymphoblastic Leukaemia (ALL) in the 1970’s [11]. After a decade, it was started to perform as a part of SCLC treatment [12]. Many randomized studies have shown that PCI reduces the incidence of brain metastasis [13,14].

In the present study, we retrospectively reviewed 28 cases of SCLC diagnosed between March 2007 and November 2016. The study protocol was approved by the Inonu University Ethics Committee. The study was conducted in accordance with the principles of the Declaration of Helsinki.

The Overall Survival (OS) was calculated from the date of diagnosis until the date of death or time elapsed until January 2017. Intracranial metastasis time was calculated from the date of diagnosis. Cranial Computed Tomography (CT) or Magnetic Resonance Imaging (MRI) was performed from all patients to exclude metastasis before PCI. All patients were treated with a total of 25-36 Gy with fraction doses of 2-2.5 Gy. Radiation therapy was conducted on two different instruments: a three-dimensional conformal RT-based Linear Accelerator (LINAC) instrument was used until 2013, and an Intensity-Modulated Radiation Therapy (IMRT) with Helical Tomotherapy.

Out of 28 patients, only one was female, whereas the remaining patients were males. The median age was 56 y (range: 36 to 72 y). All of the patients had smoking history. Twenty two patients (78.5%) had LS-SCLC, while six patients (21.5%) had ES-SCLC. The most frequent metastatic foci at the time of diagnosis of ES-SCLC patients are liver, adrenal gland and bone. Chemotherapy+thoracic RT were administered to 21 patients, while chemotherapy was administered to five patients, and two patients received postsurgical chemotherapy. In the hospital where the present study was conducted, PCI was administered to the patients with partial or complete response to chemotherapy in early or ES-and those having Eastern Cooperative Oncology Group (ECOG) performance status of two or less. Chemotherapy regimen was administered as standard treatment of cisplatin-etoposide. Twelve patients had complete response after chemotherapy whereas 16 individuals had partial response. The median interval between diagnosis and the initiation of PCI was seven months (range: 3 to 27 months). The early PCI (≤ 6 months) was performed to 13 patients, while the late PCI (>6 months) was performed to 15 patients (Table 1).

Table 1: Various characteristics of the patients.

Four patients (14%) developed brain metastasis during the follow-up programs. Two of these patients were treated with Whole Brain RT (WBRT) and Stereotactic RT (SBRT) was performed to one patient while one patient with best supportive care was used for one of them.

Seventeen of our patients died, while eleven of them survived. The mean survival time was 35 months, while the aforementioned time was 40 and 17 months for LS and ES, respectively (p=0.027). 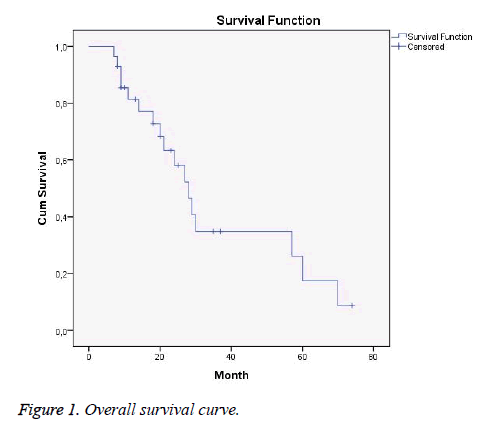 In the present study, we report our single-center experience with PCI in SCLC cases. The mean age of patients was 56 y, consistent with the literature data, and the present study included more males than the literature [14,15]. This can be attributed to the fact that women smoke less than men in the region we conducted the study.

The survival results were better than those in the literature. In the literature, the median OS for LS-SCLC patients was about 17 months while it was about 9 to 10 months for ES-SLC patients [5,6]. In the present study, OS for LS-SCLC and ES-SCLC was calculated as 40 and 17 months, respectively. This may be due to the fact that study population sample size was small and the patients with good overall health status might receive PCI.

In LS-SCLC, several studies have shown that PCI reduces the incidence of brain metastasis [16]. Although the survival benefit of PCI has not been clear, its survival advantage has been shown in some studies. In a meta-analysis involving 987 diseases, the outcome of 7 studies was compiled, 847 (86%) of these patients were in LS-SCLC, whereas 140 (14%) of them were in ES-SCLC. The rate of development of brain metastasis after 3 y was 33.3% in the group in which PCI was performed, while it was 58.6% in the group in which PCI was not performed (p<0.001). Furthermore, 3 y survival of these two groups were 20.7% and 15.3%, respectively (p<0.001) [14]. In the ES-SCLC, PCI is recommended for patients with complete response to the chemotherapy [14]. The results are unclear for patients with partial response to the chemotherapy [15]. In the study of the European Organization for Research and Treatment of Cancer (EORTC) conducted by Slotman et al., 286 patients in ES were divided into two groups as PCI after chemotherapy and control group [17]. The symptomatic brain metastasis rate was 24 (16.8%) of 143 patients treated with PCI and 59 (41.3%) 143 patients treated without PCI (p<0.001). The median survival also increased in the RT arm.

The standard dose and timing of PCI are not certain. Although a scoring system ranging from 8 Gy in a fraction to 40 Gy in 20 fractions is used, the most common treatment schemes performed are those with 24-25 Gy or 30 Gy [15]. Increased doses of RT were investigated in two randomized extensive studies. Pechoux et al. compared the standard 25 Gy (10 daily fractions of 2.5 Gy) with 36 Gy (18 daily fractions of 2 Gy or 24 fractions in 16 d with two daily sessions of 1.5 Gy) [16]. The 2 y incidence of brain metastasis was detected as similar in both groups (29% vs. 23%). Moreover, 2 y OS was 42% in the group receiving standard dose RT and 37% (p=0.05) in the group receiving high-dose RT. Another study was RTOG 0212. In the aforementioned study, RT dose of 25 Gy and 36 Gy were compared. There was no significant difference between two groups in terms of either the incidence of brain metastasis at the end of the 25-month median follow-up period or overall survival [15]. In both studies, it was emphasized that the PCI dose should remain at 25 Gy. In our department, the 25 Gy RT scheme was administered as a standard.

Regarding the timing of PCI, it has been suggested that it should be applied as early as possible. In a meta-analysis, PCI administration within four to six months of induction chemotherapy initiation decreased brain metastasis development, compared to those administered PCI late (p=0.01). However, there was no difference in overall survival (p=0.39) [12]. In the present study, the PCI timing was grouped as ≤ 6 months and >6 months and there was no difference in overall survival in the development of brain metastasis (p=0.248).

Acute and chronic adverse effects may develop due to PCI. Fatigue and alopecia are the most common among acute adverse effects, while scalp erythema, headache and nausea can also be seen [18]. Neurotoxicity and intellectual disability in terms of long-term toxicity have been shown to be particularly high in older treatment modalities, in circumstances with high fraction doses or high total dose, and in cases with concomitant chemotherapy performed [18-21]. In the RTOG 0212 study, the rate of chronic neurotoxicity was found to be significantly less (60% vs. 85%, respectively, p=0.02) for patients who were administered 25 Gy compared with those receiving 36 Gy [15]. In recent years, hippocampal-sparing RT has been on the agenda to reduce the neurocognitive impairments. In the RTOG 0933 study, it was demonstrated that the memory preservation and quality of life were better with hippocampal-sparing RT technique for whole brain irradiation due to brain metastasis [22]. However, there is a need for extensive work in this area and it is necessary to wait results of on-going phase III studies (NCT01797159, NCT01780675 and NCT02635009).

In conclusion, our study results suggest that PCI is a safe, lowtoxicity treatment modality used to prevent brain metastases in SCLC cases. However, further large-scale, long-term studies are required to confirm these findings and to establish a definite conclusion.